I Love Our School 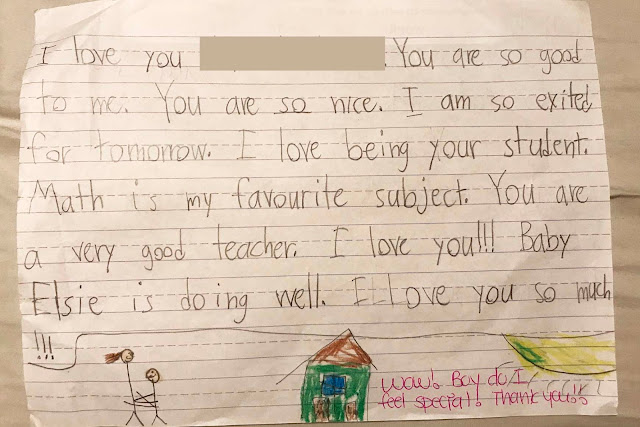 The other day, Lincoln came home with an assignment from school. On the back, he had randomly written this note to his teacher (name removed for privacy). His enthusiastic message made me smile so, so much. His adoration is well-earned, though--the boys truly do go to a school with such amazing teachers! A few examples, in addition to ones I have already shared on this blog:
Exhibit A: The Monday morning after Elsie was born, I received an e-mail from Lincoln's teacher to congratulate us. She then asked me if we could use dinner and said she would love to send dinner home from school with Lincoln one day. I was totally blown away--his school teacher was offering to prepare dinner for us?!? She is so amazingly kind and thoughtful and Lincoln loves her.
Exhibit B: I told Sam I kind of feel like I'm famous when I go to the kids' school. So many teachers seem to have a general feel for our family and what is going on. When we went to back-to-school day before school started, for example, Talmage's teacher from 2 years ago gushed over how excited she was about our baby and how she had heard it was a girl (from who? my kids hadn't even been back at school yet!). She also exclaimed over the fact that she was SO disappointed that Wesley wasn't in her class and said that he had initially been put in her class but then some changes had been made so he was shifted. Another teacher came running up to my window in the car pick-up line the day before Elsie's due date to tell me that she would be praying for us. When Sam was managing school drop-off and pick-up during his paternity leave, the school secretary asked him in the car line if everything was okay with me and the baby because she had noticed the change in the pick-up routine. At the end of the school year, the kids' teachers have requested to be my friend on Facebook and then comment so kindly on what I share on Facebook. My kids come home with tales of teachers calling out to them individually in the hallways or in other circumstances--some of whom have never even taught any of my kids. I'm sure the teachers give this kind of individualized attention to all of their students, and it definitely makes us feel loved.
Exhibit C: Although he's still in elementary school, Talmage has several different teachers for his various school subjects. He had to stay home sick for a few days back at the beginning of the year, and I received a phone call from his math teacher. I had e-mailed his homeroom teacher to explain that he was sick, but evidently that information had not been passed along to all of his teachers, so his math teacher was just taking the time to call and make sure he was okay since she hadn't seen him in class!
Exhibit D: A few days ago I received a phone call from the school. I answered and was startled to hear the principal introducing herself on the other end! She said, "Is this Wesley and Lincoln's mom?" A huge pit formed in my stomach instantly as I waited to hear what was wrong...was someone hurt? Had they done something bad? But no. She told me that they were doing something new called a "student shout-out," and Wesley and Lincoln had been chosen for it on the same day, as brothers. She shared with me that Wesley had been asked once to help a younger student navigate the car pick-up line but that he had continued to check in with the student throughout the year and make sure he was okay and knew where he needed to go. She also shared that Lincoln is always positive, enthusiastic, and happy about what he is asked to do and that "he is a blessing to be around." She asked for my permission to post a photo of the two of them on Twitter and then hung up. It took a good 15 minutes for my heart to stop pounding for the scare she gave me by calling (I'd never spoken to the principal before), but I was so thankful she had taken the time to share that with me!
Exhibit E: Lincoln's teacher sent me an e-mail a couple of weeks ago, explaining that she knew the assigned homework was not providing him with a challenge. She had thought up a new system of homework for him specifically, that would involve him choosing a topic every two weeks to research and then write a short essay on. After he chooses his topic, she even goes to the effort to check out books from the school library for him to bring home to use in his research!
Exhibit F: Both Wesley and Lincoln's Kindergarten teachers made large, personalized scrapbooks for every student in their classes. They saved some of their work from the year to include and they took pictures of each student on special dress-up days or during other celebrations throughout the year and then collected them all into beautiful memory books for the parents! As I flipped through Wesley's book when he received it, I was overwhelmed when I thought about all the time and effort that had gone into it.
The teachers at the boys' school have given such personalized care and teaching. I have been so, so grateful for the school experiences we have had here!
Posted by Kaitlyn at 7:18 PM