Some of my family came to visit at the end of October for Wesley's baptism!
My mom, my dad, and my youngest brother, Bronson (who just left on his mission a couple of weeks ago), all drove out from Utah, and we were joined the next day by my sister, Breanne.

Day 1 wasn't too eventful, and for good reason! They had driven with only about an hour of a stop for sleep, all the way from Utah to Memphis--roughly a 24 hour drive in good conditions, but they had a blizzard to contend with for a good portion of the way as well!
They arrived at our house around lunchtime and my dad crashed pretty much right away to get a few hours of sleep under his belt before they could check into their hotel.
I sat around chatting with my mom and Bronson (and getting Maxwell to warm up to them) until they could go to their hotel to shower and change after their marathon drive.
We then met back up at our house for a classic Memphis meal: Gus's Fried Chicken.
It is all the rage here in Memphis, although it's rather spicy for our tastes.
After dinner, we headed over to their hotel to let the boys swim!
I laughed so hard when Maxwell, frantic because he had gotten water in his eyes and they were hurting, ran toward me saying, "Mommy, Mommy!" and then stopped dead in his tracks, turned 90 degrees, and ran over to Sam's slipper and used it to wipe his eyes.
Taking a leaf out of Stephen Covey's book, Sam will sometimes tell our kids, "Use your R and I!" (Resourcefulness and Initiative) I guess Maxwell was doing just that!
It was freezing that day, so Talmage and Wesley zipped themselves together in Sam's hoodie before we headed out the door to go back home for bed. 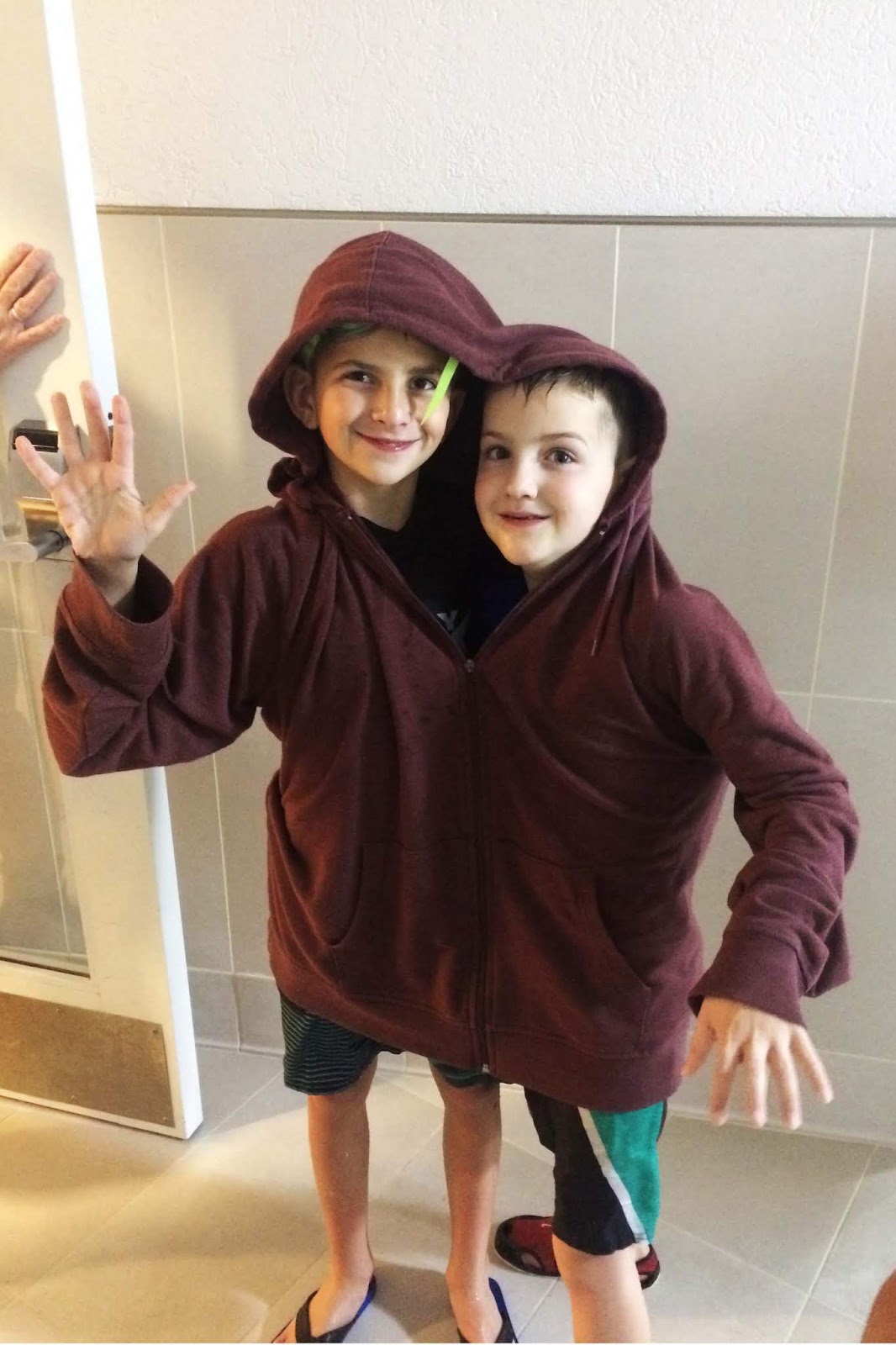 Bronson loves metal working and even built a forge in their basement! He is quite the blacksmith, so visiting the Metal Museum was a must while they were here. It is very unique--the only museum of its kind in America.
I hadn't been before; it was so fun to see the different creations and watch the professional blacksmith in action. Bronson could have stayed and watched him all day.
Where else in the world can you see giant metal cockroaches? 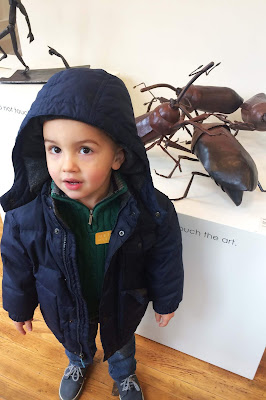 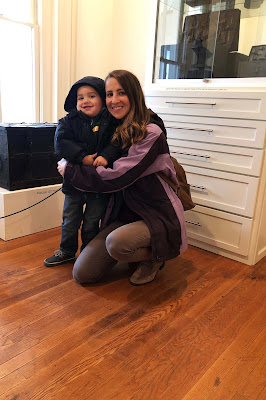 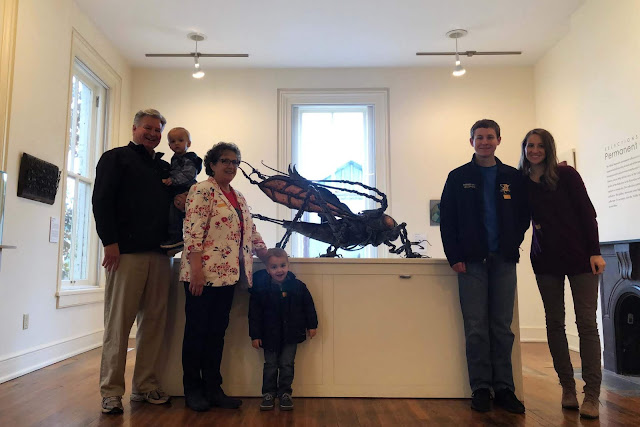 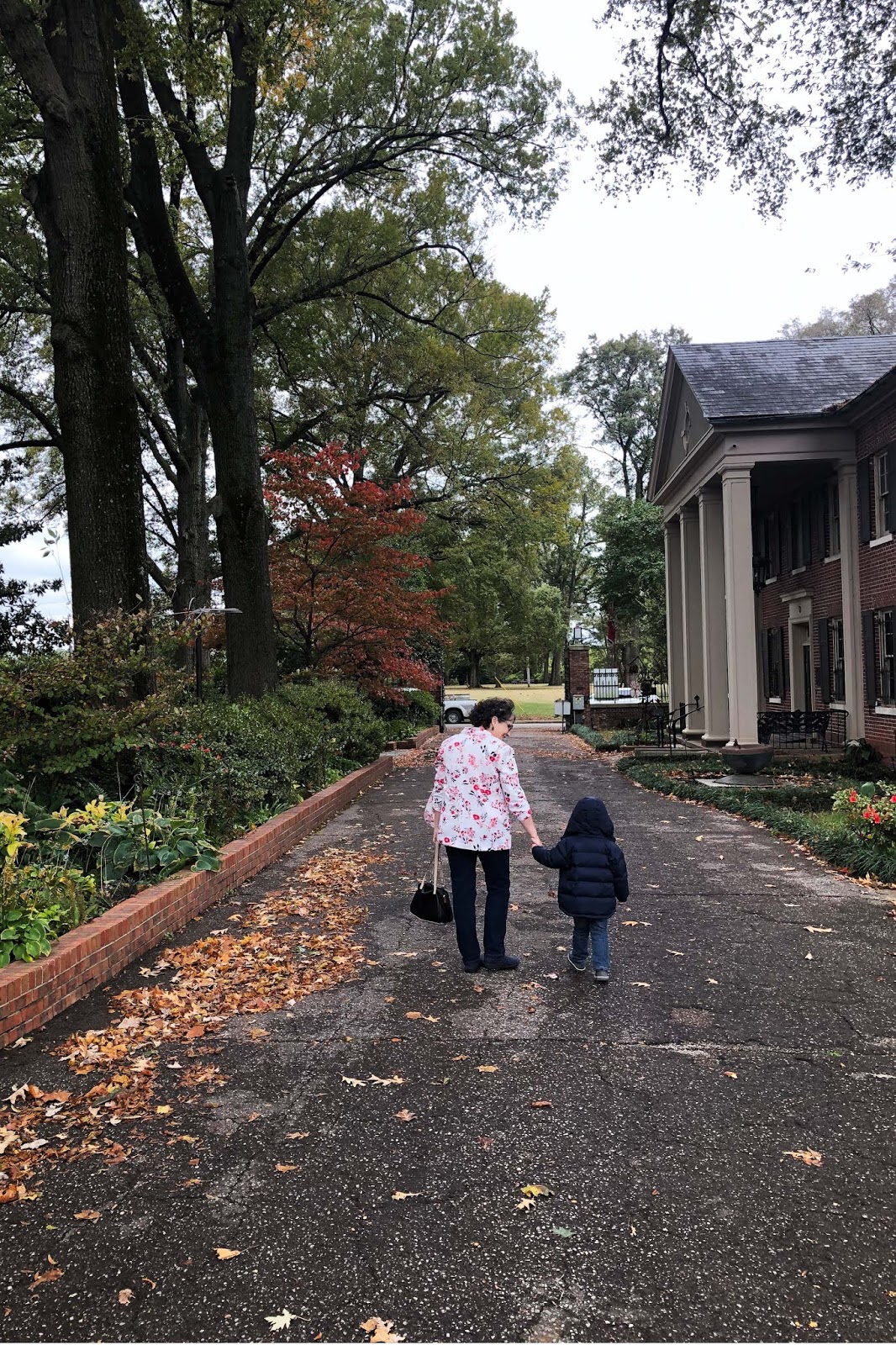 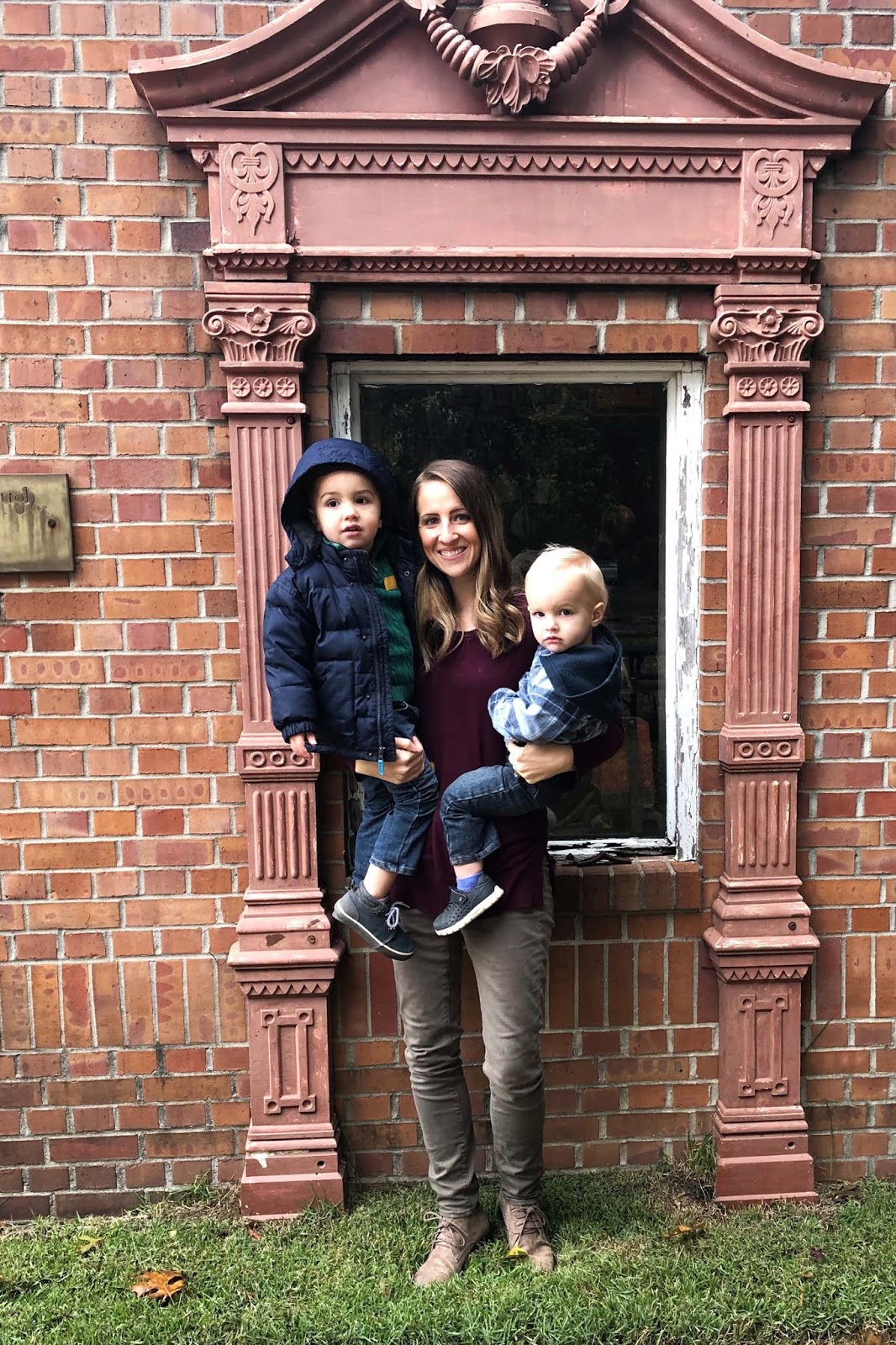 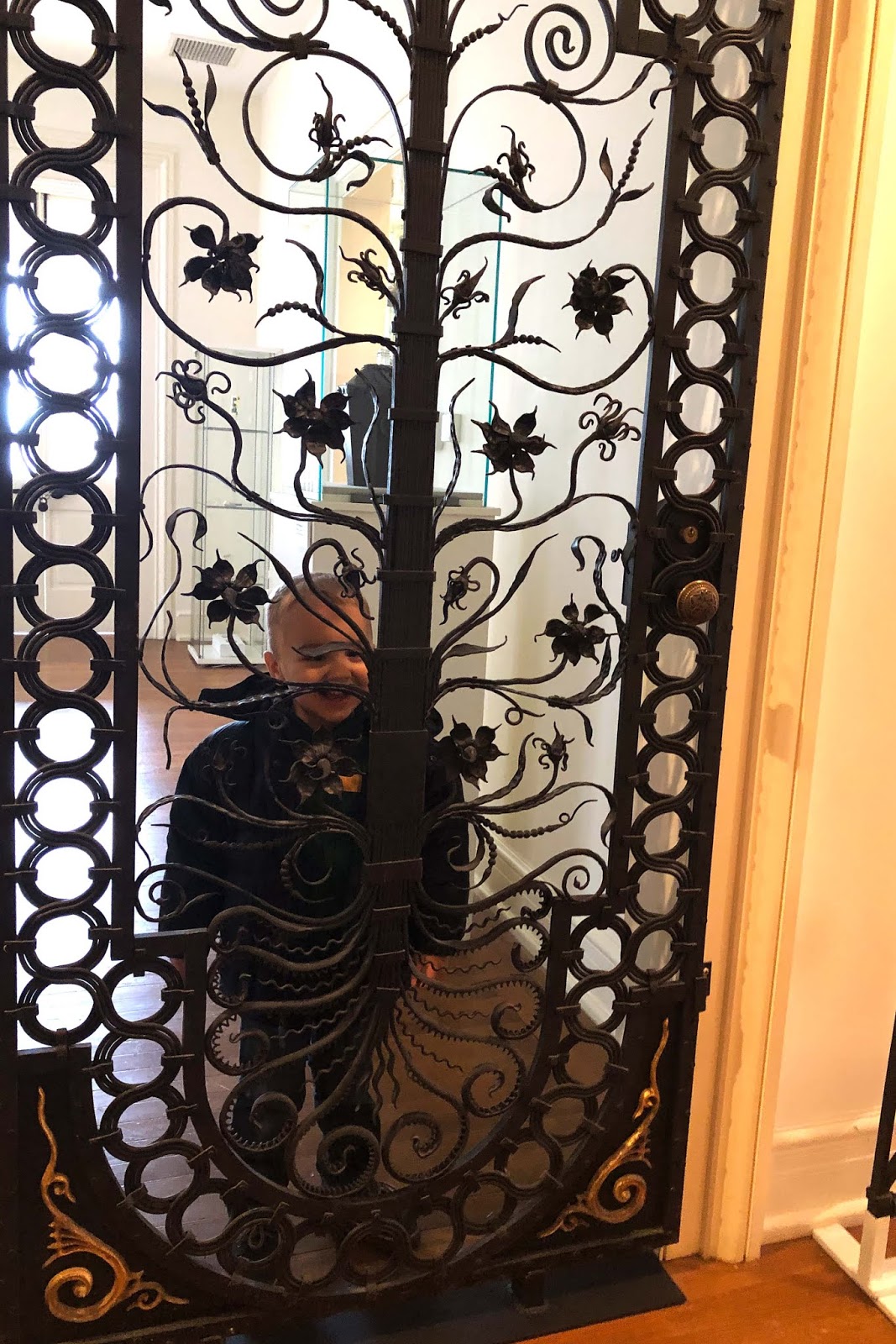 After the Metal Museum, I picked Sam up from St. Jude and we had lunch together at an interesting little sandwich place called Westy's nearby. I tried fried catfish for the first time and didn't hate it as much as I thought I would! It's something I had wanted to try since, again, it's a Memphis classic, but I was unwilling to pay for something I didn't like. Thankfully, my dad had no such reservations. My veggie grilled cheese was delicious as well. We then went back to St. Jude, where Sam showed my dad and Bronson around his building. (At least, a little bit! They couldn't do much because of the massive amounts of adorable trick-or-treating patients--Halloween is the craziest day of the year at St. Jude with a strong celebrity presence.) We walked around the pavilion a little bit before heading home to get ready for dinner and trick-or-treating!

Because it was so cold, we intended to go to a nearby nursing home, where I had heard they had trick-or-treating available. Win/win--the residents get to see adorable costumes, and the kids get to stay warm! But when we arrived at 7:00, we found out that they had just finished. They gave the kids a few pieces of candy and we headed back to our neighborhood to freeze as we hit a few houses up and down the street. I made hot chocolate when we got back to the house, and that night Breanne arrived!

The next morning we decided to visit the Bass Pro pyramid. Again, I had always wanted to ride the elevator to the top (at 300 feet, it's the tallest free-standing elevator in America!), but had been unwilling to pay the price to do it. Once again, my parents had no such qualms and we got to ride the glass elevator up...up...up to the observation balcony at the top of the pyramid! 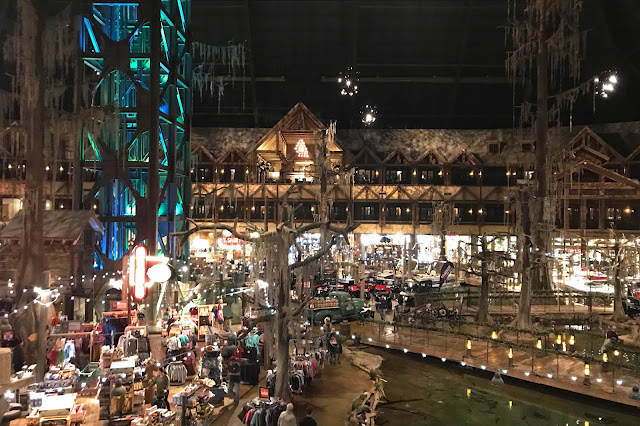 It was the funniest thing to watch Benson at the top.
While Maxwell characteristically cautiously and deliberately took each step toward the railing, Benson ran over and began trying to squeeze through the rail. It soon became clear that he thought the side of the pyramid was a giant slide and he wanted to go down!
I mean, why not? Nothing like a slide with a 300 foot vertical drop to give a 1-year-old some excitement.
Just look at him! 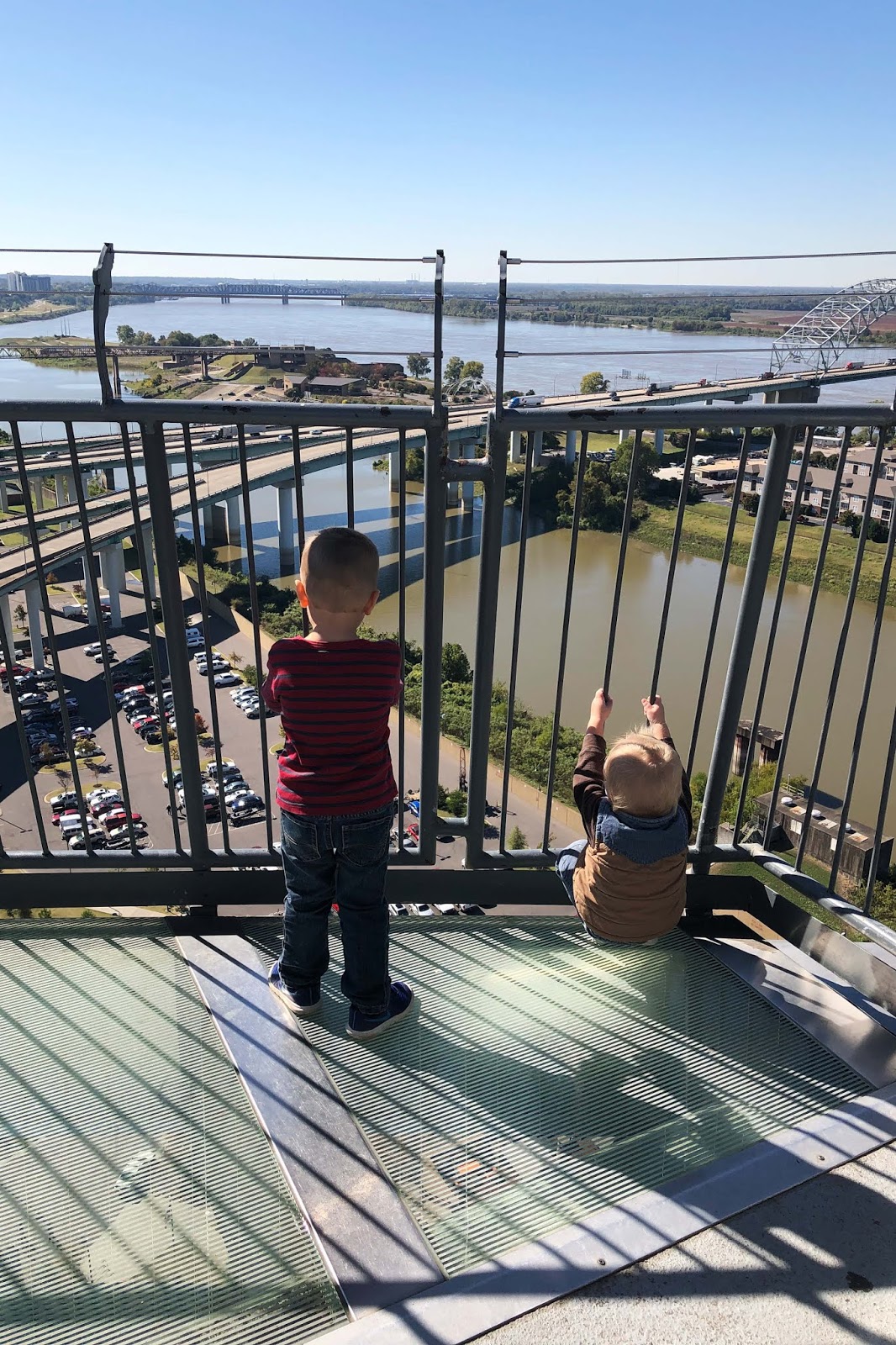 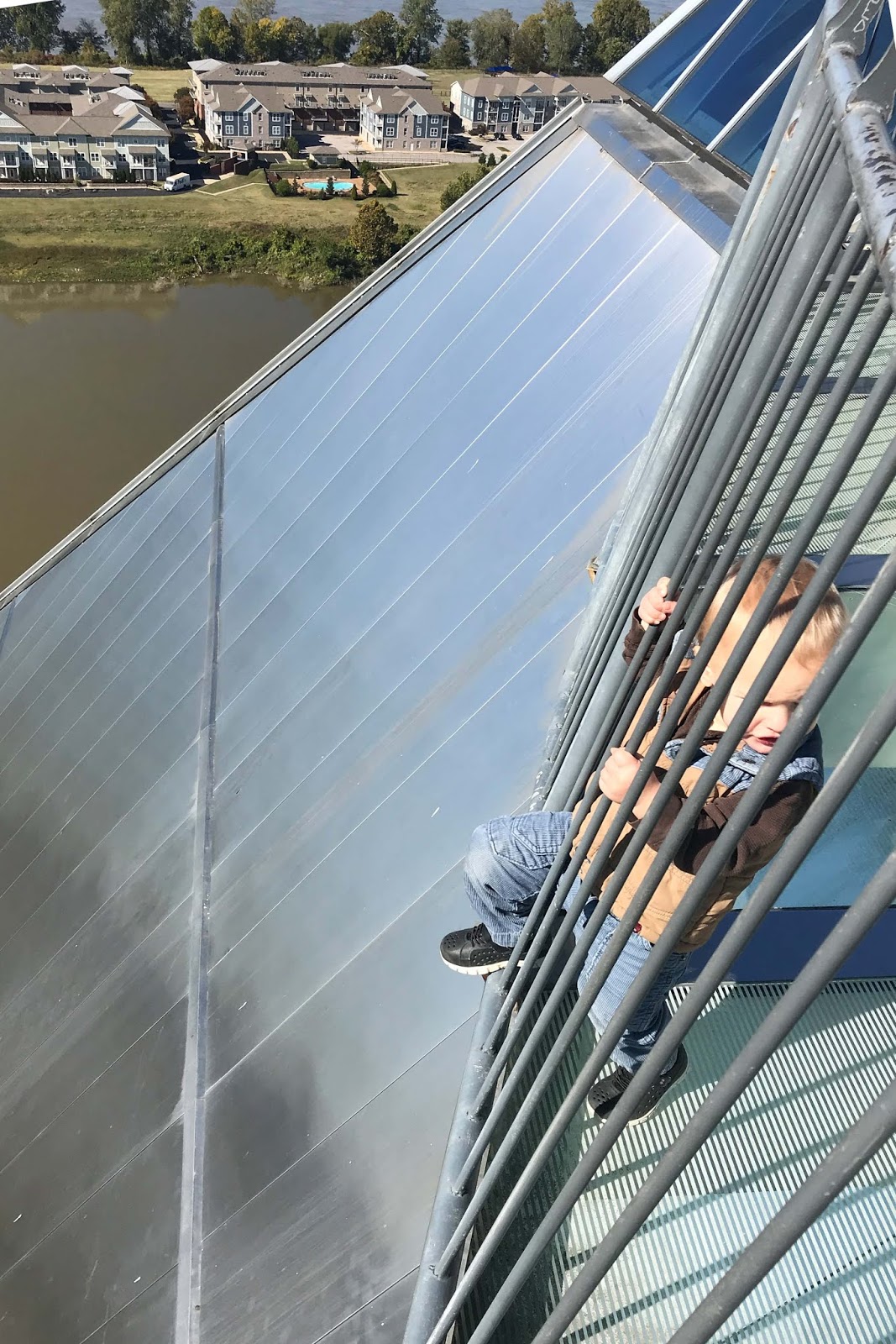 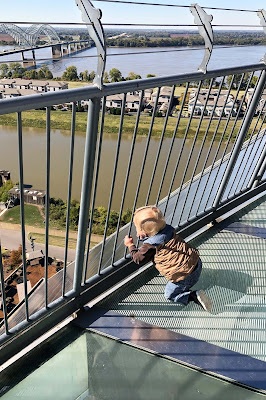 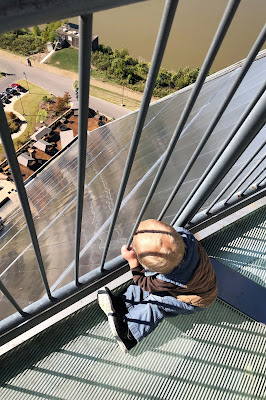 It did provide a lovely view of Memphis, and thankfully the weather was greatly improved from the day before! 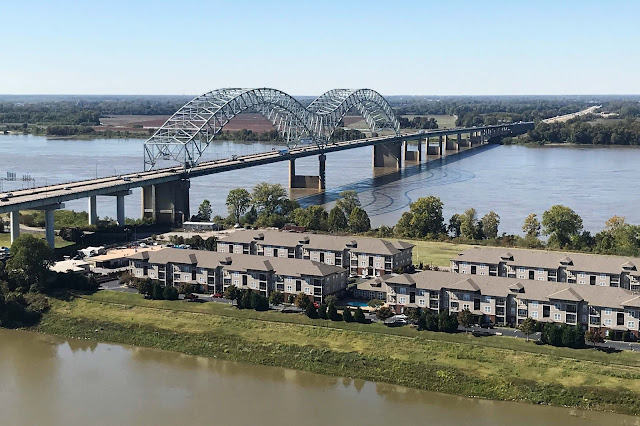 (looking down at the river) 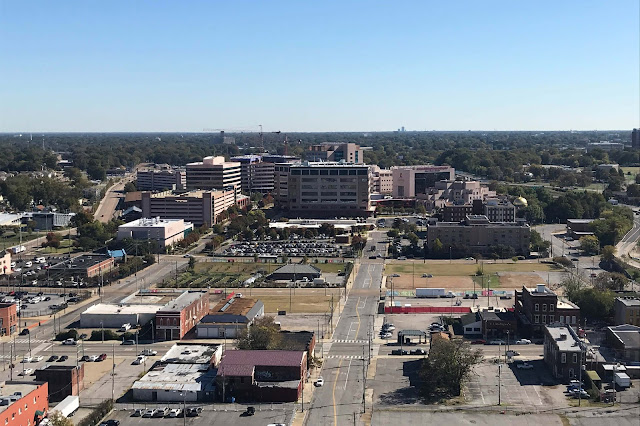 (looking down the street at St. Jude--all the pink buildings are part of St. Jude) 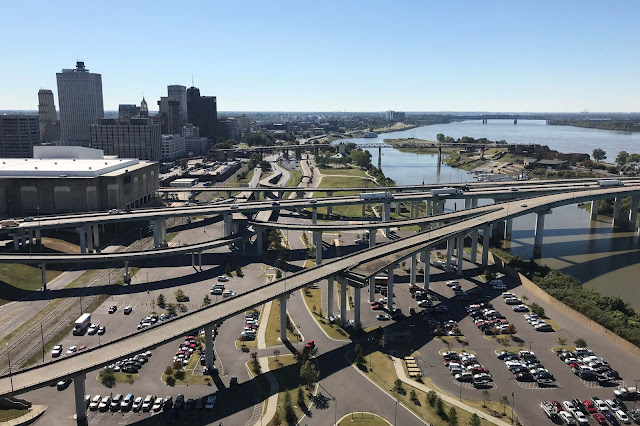 (looking toward the Memphis skyline) 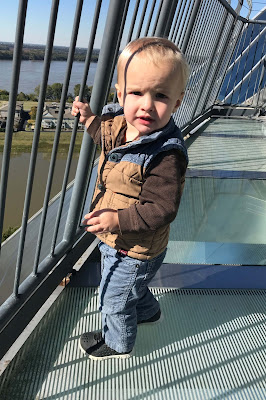 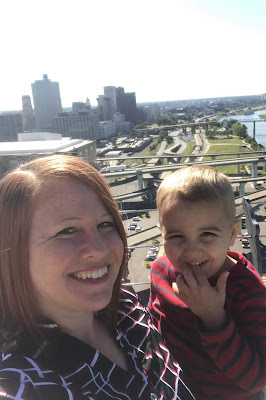 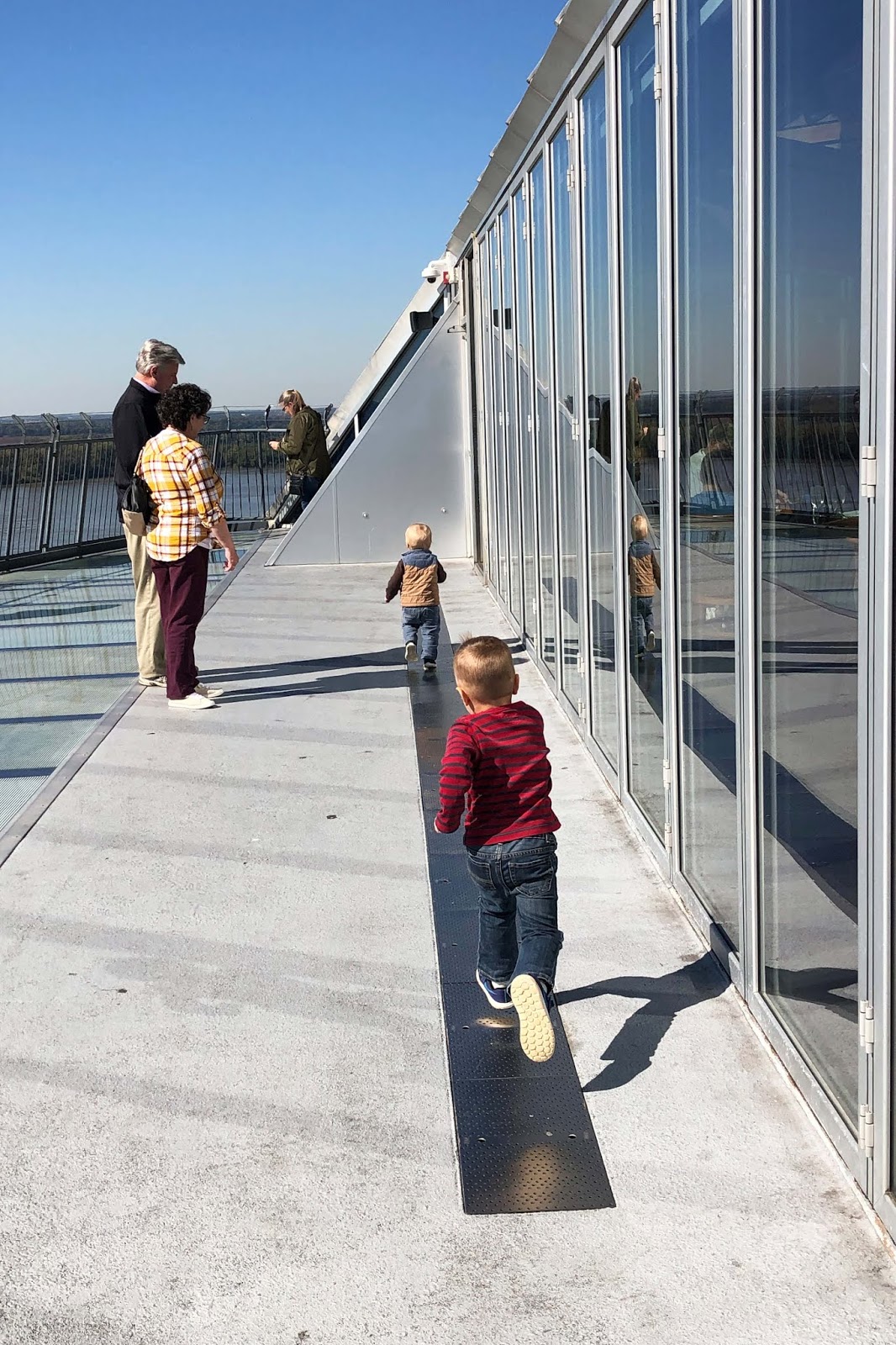 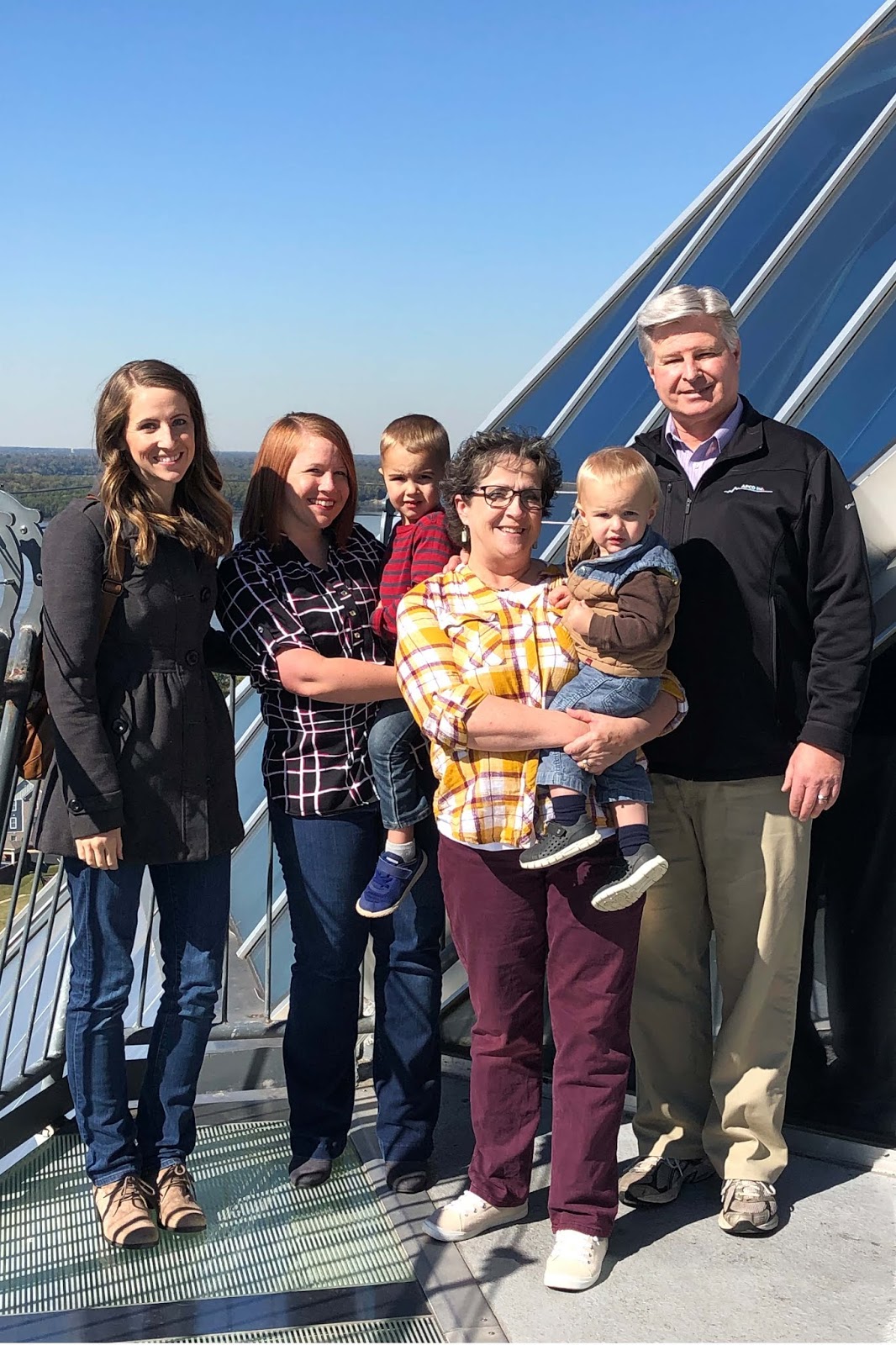 (Bronson stayed down in the store while we went up.)


We wandered around the store for a while and picked up a bunch of flavors of fudge, some cinnamon cashews, and some holiday flavored Jelly Belly jellybeans!
We didn't really need anything else for lunch, right? 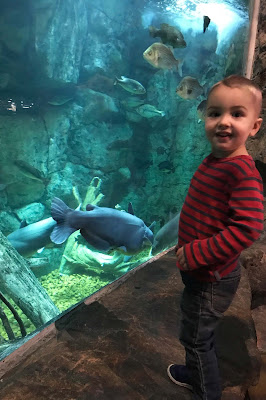 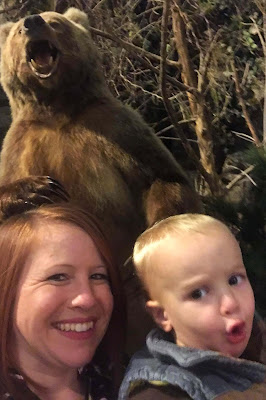 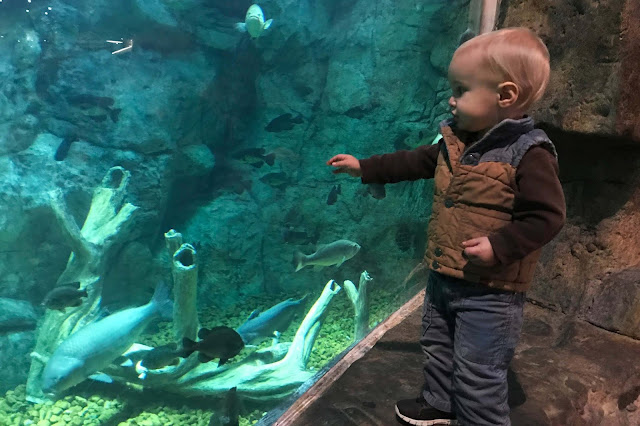 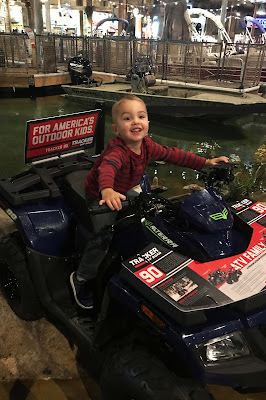 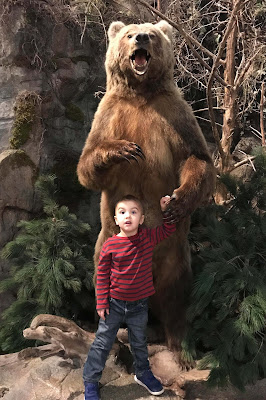 Then we headed over to the Mississippi River riverwalk park, featuring the to-scale model of the Lower Mississippi. I thought my dad and Bronson would love to see the engineering of it. 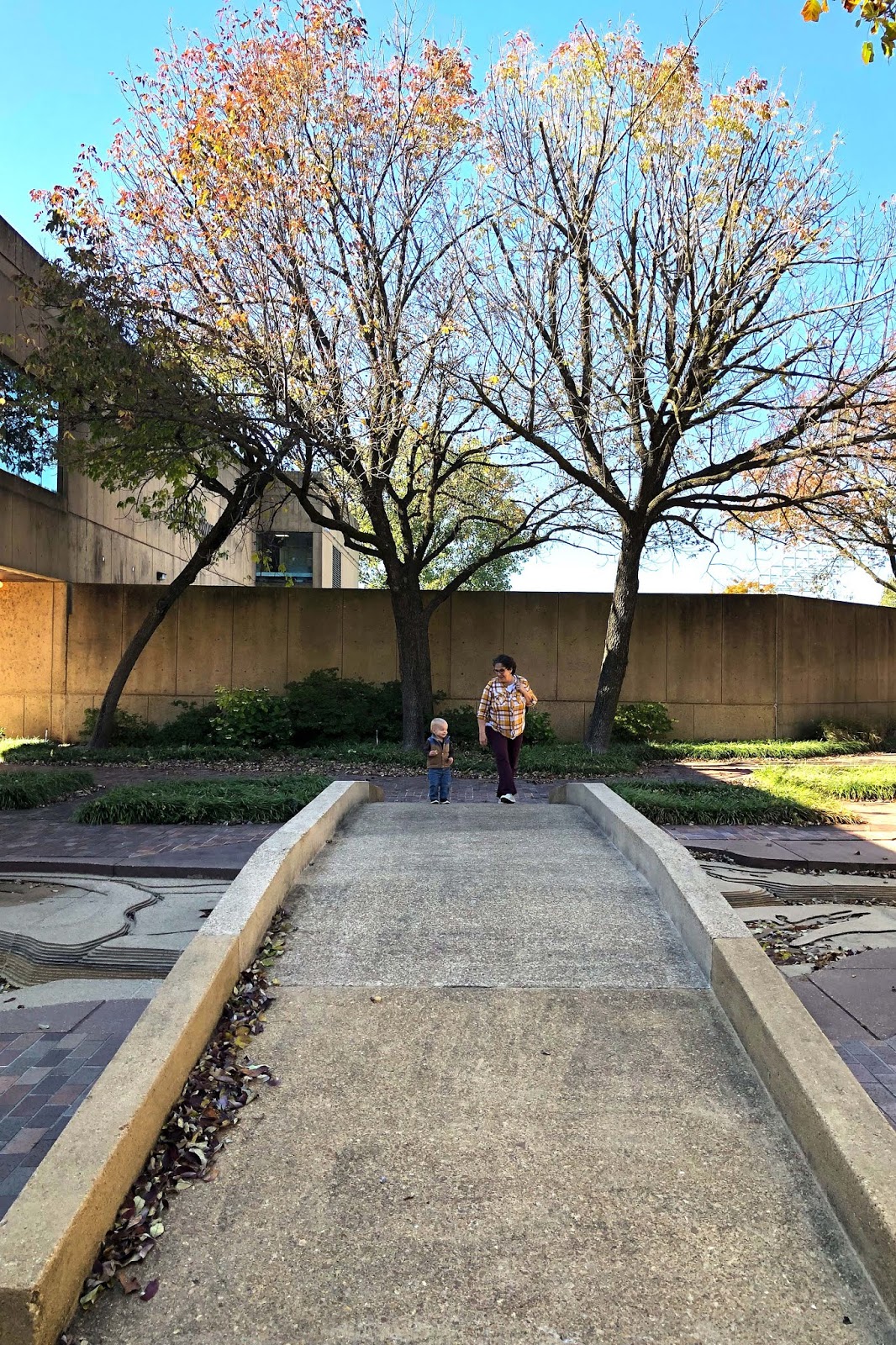 Breanne, the kids, and I didn't stay long, because we had to hurry home for me to make a real lunch, do a quick Costco run, meet the older boys as they came home from school, and pick up a babysitter for the night's adventure. I whipped together some chicken cordon bleu paninis and gave Breanne quick instructions regarding the boys getting off the school bus before I did a blitz run through Costco to pick up food for the lunch following Wesley's baptism and came home with the babysitter, just in time to leave again to pick up Sam from work and visit Beale Street for dinner.
Phew!

Now, I'm not the biggest fan of Beale Street. It is crowded and LOUD and hectic and LOUD and smelly and LOUD and did I mention LOUD? All the flashing lights and bars and screaming music don't really appeal to me, but, as my sister said, visiting Memphis and not seeing Beale Street kind of felt like visiting Washington, D.C. and not seeing the Washington Monument.
I dunno, maybe that's a bad rationale to go, but we eventually found a (very expensive) parking spot and made our way to B.B. King's for typical Southern dining and LOUD live music.
The band was actually quite good, though, and kept things family-friendly, so even though we couldn't hear ourselves think over the music, I thought it was pretty fun. 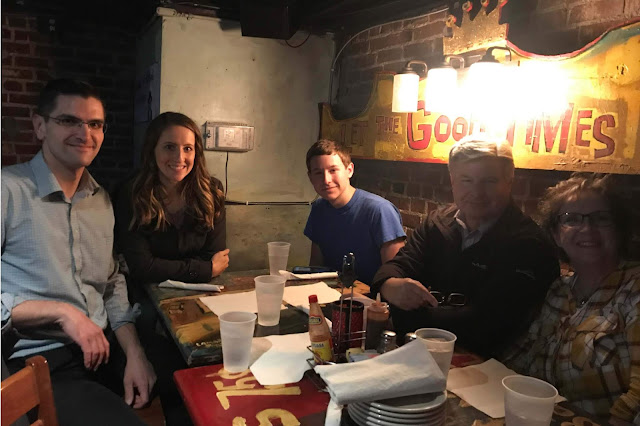 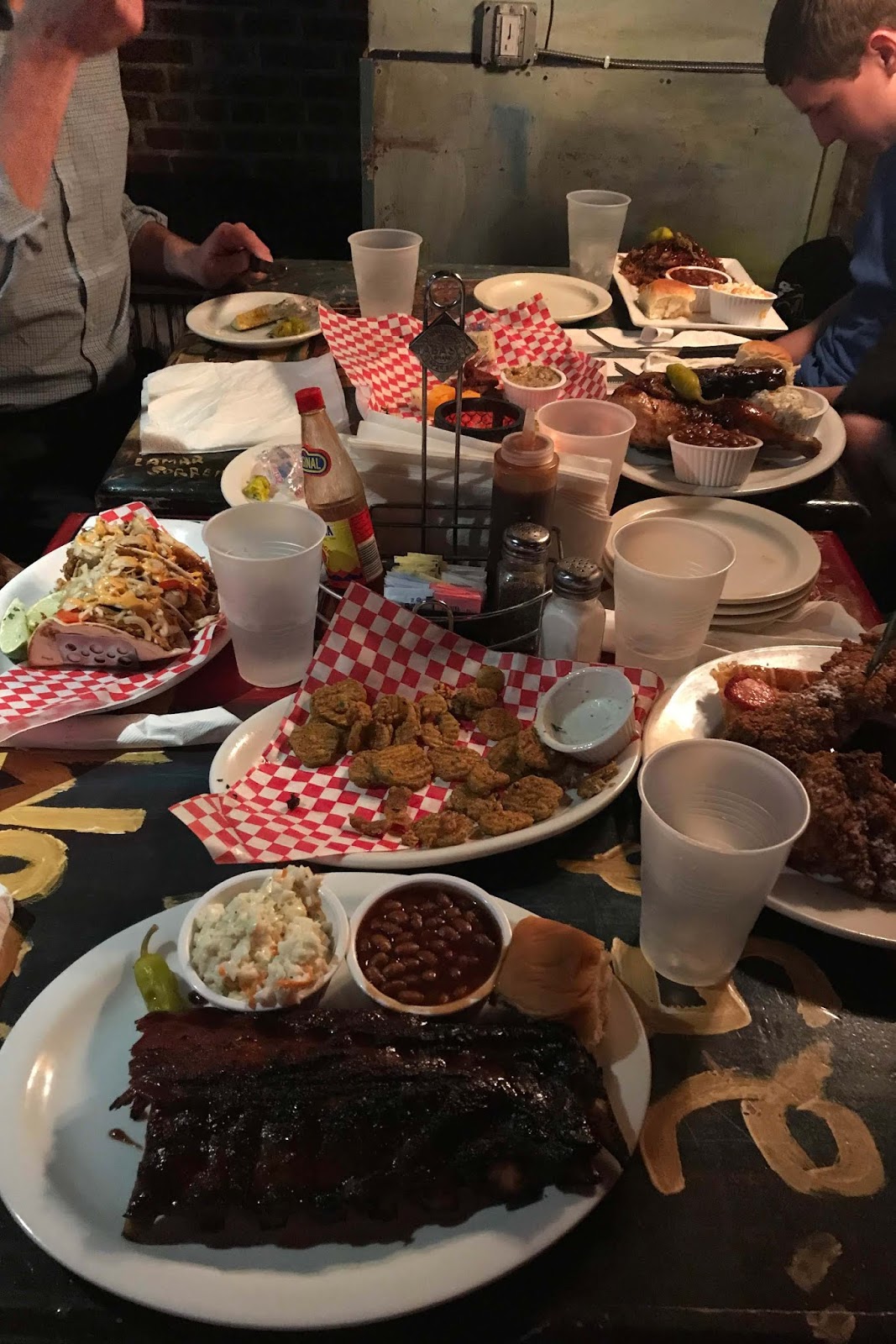 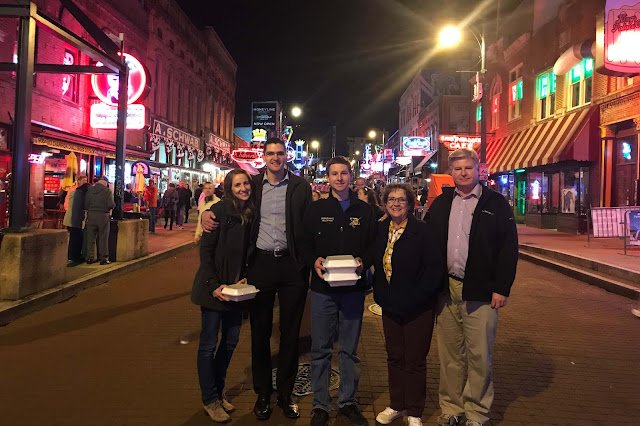 (Breanne was there too, but she kindly took the pictures!)
We made it back home just before the boys went to bed, and then Breanne and I stayed up until about 1:00 in the morning getting things ready for Wesley's baptism the next morning (I cooked and Breanne showed me funny YouTube videos to keep me awake!).
Baptism details coming up next!
Posted by Kaitlyn at 2:16 PM