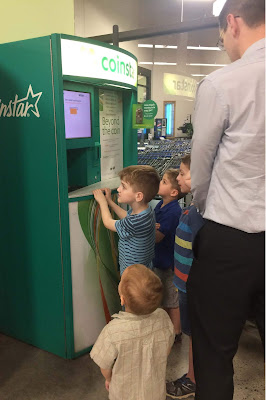 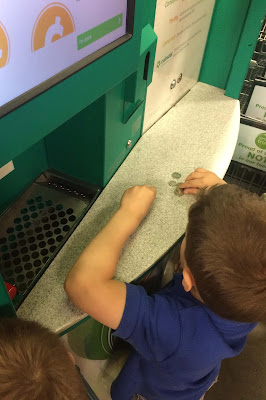 The Wednesday before Easter is traditionally known as "Spy Wednesday,"
and Judas' act of receiving 30 pieces of silver in exchange for his betrayal of the Savior is remembered.
I was struggling to come up with a meaningful activity for today, in part because betrayal doesn't lend itself well to a celebration.
You know?

Eventually I worked out a plan to gather 30 pieces of silver money and talk to the kids about how Judas' problem was that he loved money more than he loved God. We discussed the fact that we should not have our hearts set on money and that we should always use our resources to serve God.
We then went into the grocery store to the Coinstar machine and the kids each got to select a charity on the machine to give their handful of coins to. They enjoyed carefully feeding their coins in, and I think they liked being able to take ownership of where their donation would go.

It was a really simple activity,
but surprisingly difficult to plan.
It involved me working with many customer service representatives (a couple of them getting annoyed with me and hanging up on me!) as I tried to track down a way to change $5 to coins.
I was also trying to find a good drop box to donate the money.
I initially planned to take the kids to the Danny Thomas Pavilion and meet up with Sam. They have a dropbox there for donations, but they close at 4pm and that didn't give us enough time to get there.
Finally my friend told me I could swap her a $5 bill for coins from a big jug of change she had and I was informed that the Coinstar machines had a donation option.
(Thank you, helpful customer service person!!)

Sometimes I wonder if fun activities I plan are worth the hassle, but then today Maxwell pointed at the pictures of the Savior we've opened this week and he said, "I opened that one!" And then he pointed to Jesus casting the moneychangers out of the temple and told me Jesus was in the temple.
I was surprised because I didn't really think he had been paying attention, and that picture looks nothing like the temple he is familiar with.
I'm always amazed at how much kids pick up on even when they don't seem to care.
Posted by Kaitlyn at 8:04 PM