Mommy Doesn't Play With Us 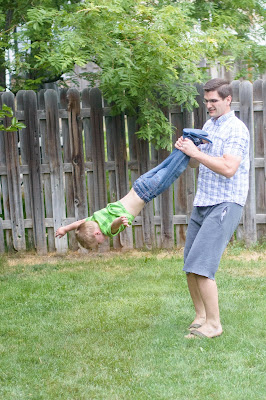 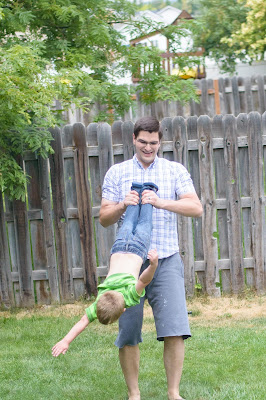 A few months ago, Sam said something about me playing with the boys.
In response to this, Talmage quipped, "Mommy doesn't play with us!"
Sam jumped to my defense and replied, "Yes she does!"
Talmage thought for a moment and then said, "Oh yeah...games."

I found the conversation somewhat amusing, but it also gave me food for thought.
"Do I play with them?" I wondered. "And should I play with them more?"
When I had one or two small children, I was their primary playmate.
We built forts and flew airplanes to foreign countries and jumped on the trampoline.
I flipped them into the "poof" and put on puppet shows and drove toy trucks for hours.
But as our family has grown and the responsibilities of caring for their needs have become more all-consuming, my role as playmate has diminished drastically and they have turned to each other for play.

And sometimes I feel guilty.

My version of "play" now more often involves going on "field trips," painting with watercolors or sculpting with play-dough, and playing board games and card games.
I make an effort to spend intentional time with my children each day,
but there is no doubt that it is different than Sam's interaction with them or their interaction with each other.

But as I've contemplated the subject, I have realized that in addition to my role as nurturer and teacher,
I have now settled into a role as a creator.
I am the primary one who creates the framework for their happy childhood.
I think up and implement meaningful family traditions.
I bake pumpkin gingersnaps in the fall and dip chocolates at Christmas time.
I fill the shelves with jars of fruit and fill the freezer with jam.
I schedule outings and organize playdates.
I gather the family around the piano to sing songs as I accompany them.
I take pictures and make photo books and blog and journal to preserve memories.
I purchase gifts and organize toys to make imaginative play more accessible.
In short, I create a stable, comfortable, safe home where we learn and grow and love and laugh together
while making memories we'll treasure forever.

And yes, sometimes I play.
But not as often as I once did.
And, as I've mulled over it, I've concluded that it's okay.
My primary role is not to be a peer to my children,
and my efforts, as mundane as they may seem, are doing much to create the happiness they enjoy.

And my hope is that as my role continues to evolve as they grow,
they will always feel of my inexpressible love for them in each stage of life.
Posted by Kaitlyn at 8:53 PM