If you ask Wesley to smile, you'll get a lot of photos like these: 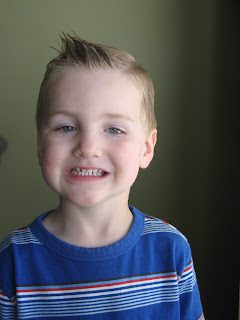 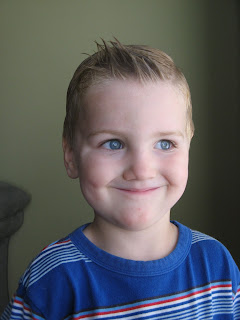 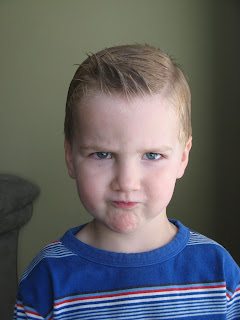 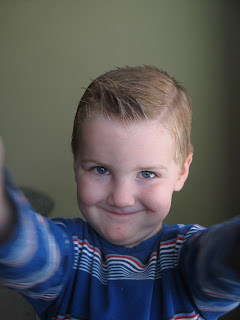 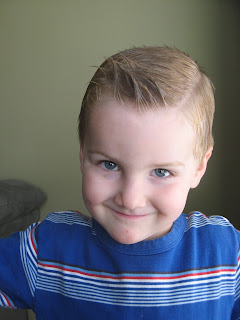 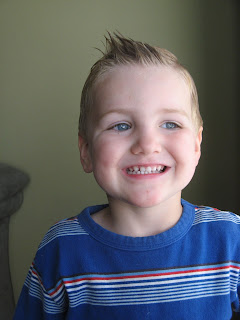 Until you get him to laugh, after which you'll finally get some winners: 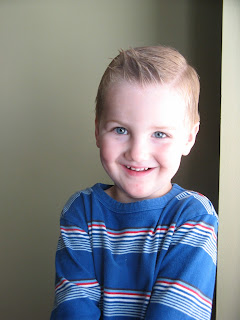 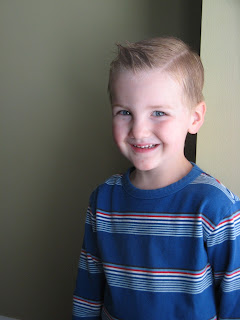 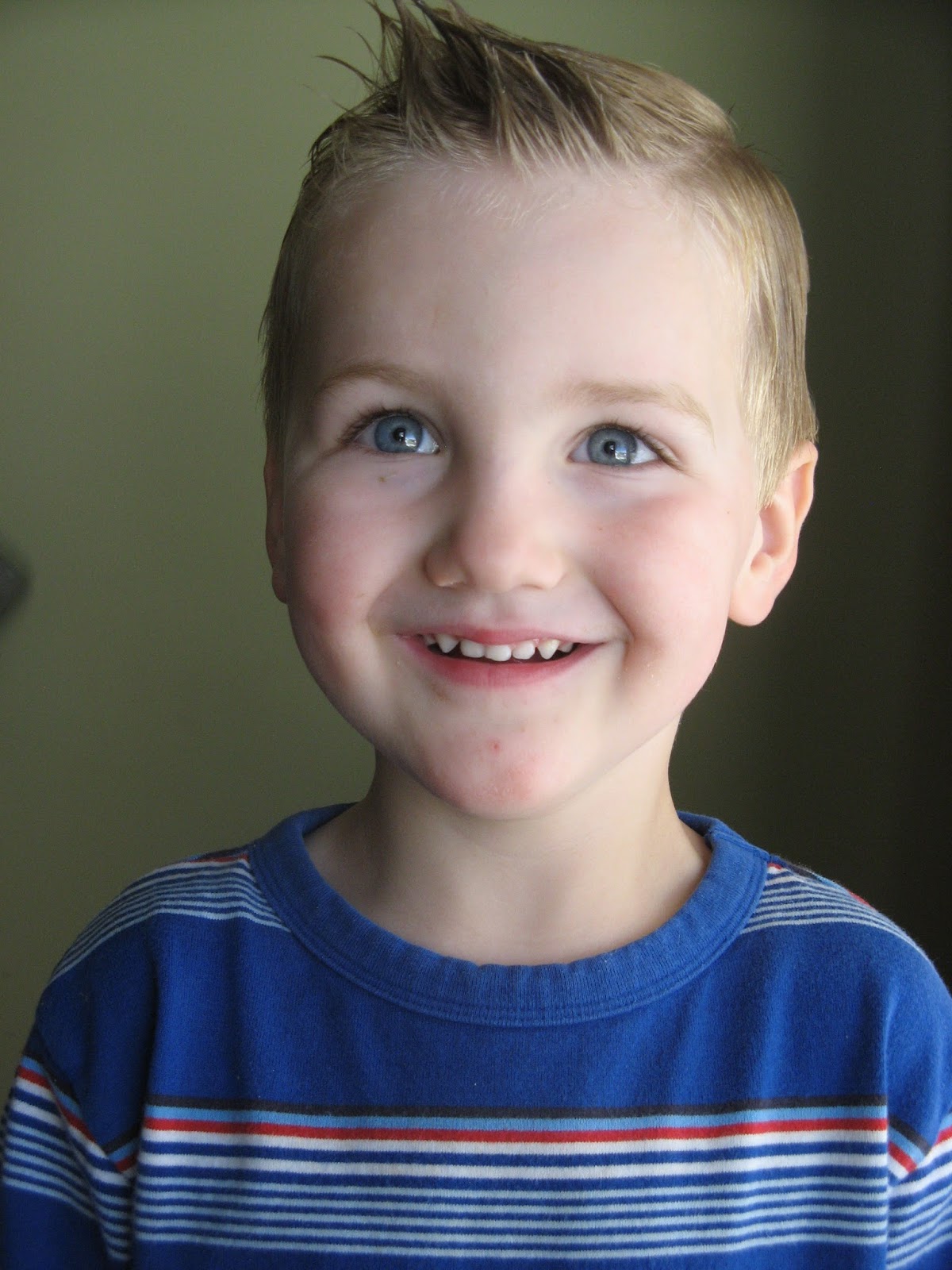 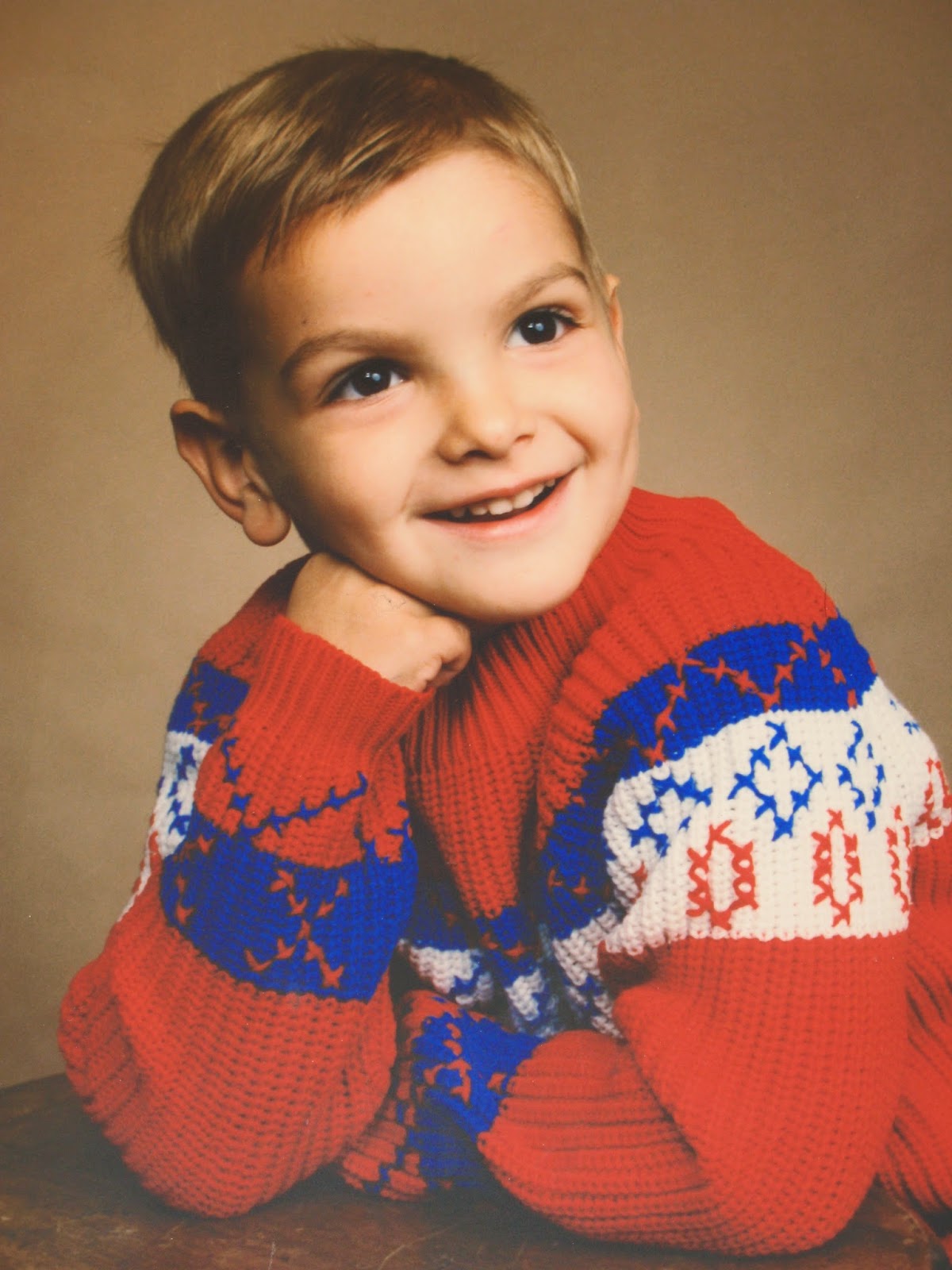 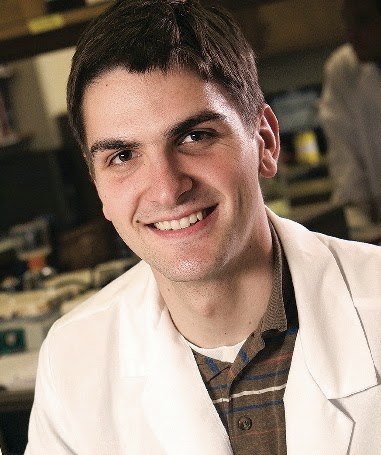 Yesterday was Sam's 30th birthday!!
It's hard to believe.
We had a great celebration with his family--
cilantro-lime chicken quesadillas,
chips & pico de gallo,
Brazilian lemonade,
fruit salad,
and ice cream cake
were followed by presents and an FHE together on Memorial Day.
We enjoyed a few more celebratory activities yesterday evening.

Sam was excited about the new bike I scored for him at a used bike sale earlier this month!
Talmage is getting pretty fast on his (fast enough that I don't tip over while pulling Wesley & Lincoln in the trailer), so we're looking forward to many family bike rides together.
I had a 30 mile bike ride planned to celebrate his 30 years, but it's been postponed as his work is really crazy right now!

In honor of 30 awesome years,
I thought I'd share 30 random facts about him.
I tried NOT to gush too much, because he really doesn't like me to brag about him
(and I suppose it can get annoying to others)
so these are mostly neutral facts
and I saved the major gushing for my own personal birthday tribute to him.

He's my absolute best friend, and I loved the chance to celebrate the big 3-0 with him!! 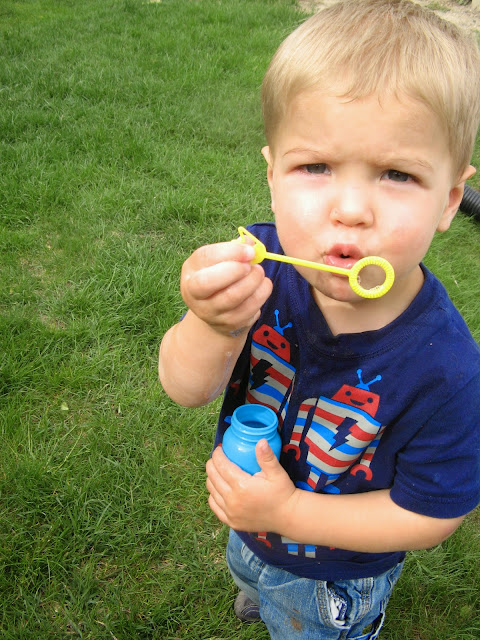 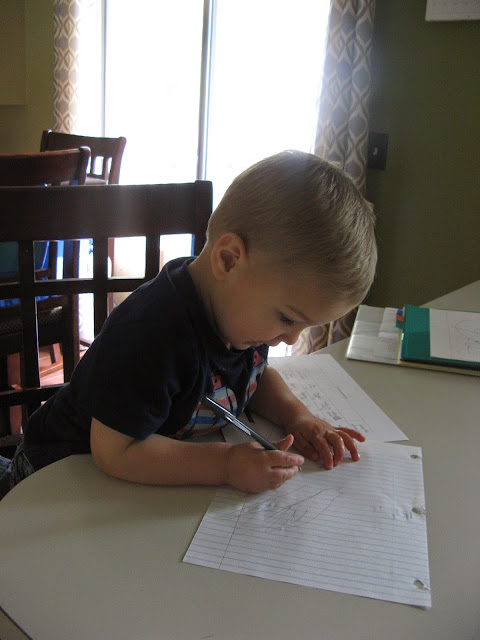 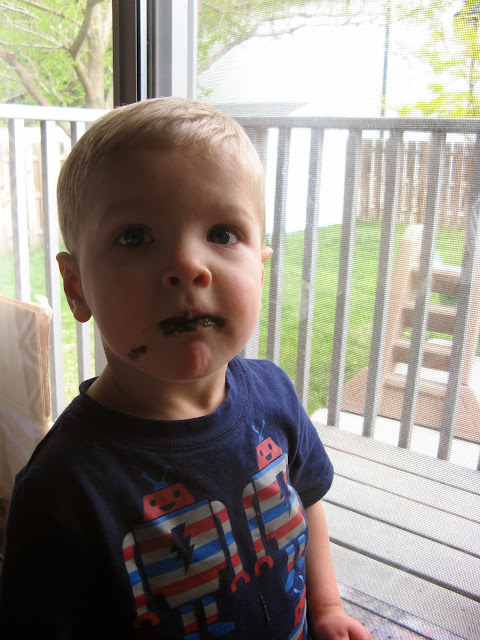 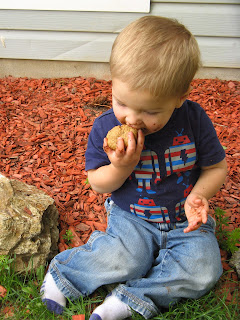 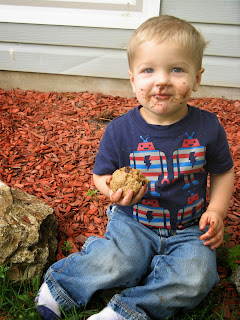 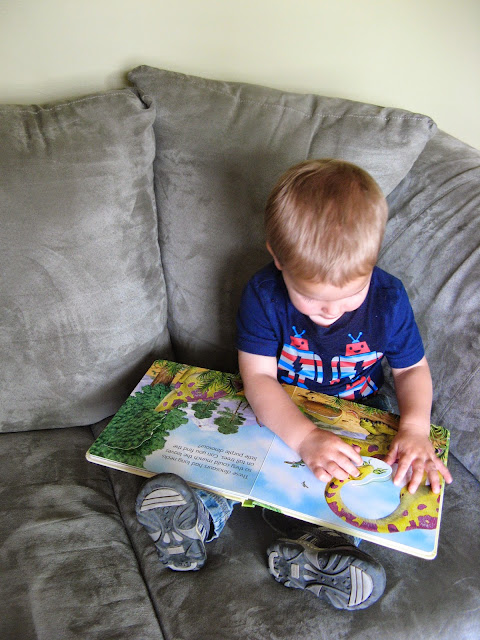 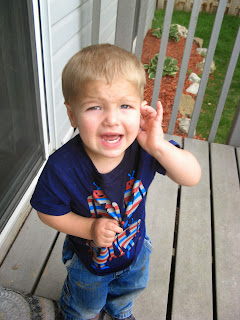 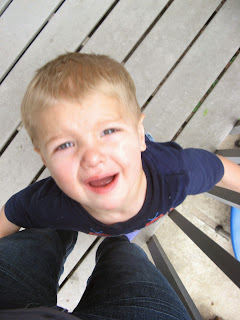 Oh, and plenty of this too, just to keep things real.

My baby is growing so fast it's astounding!
He's quickly earning "little boy" status.
His simple pleasures take me back to Talmage's toddler days, when the days seemed never-ending.
Now, with three boys, the days fly by and I wish so desperately for more time to do these simple things.
I'm so thankful to be able to watch him grow!
Posted by Kaitlyn at 12:00 AM 2 comments:

Don't Expect Them NOT to Change 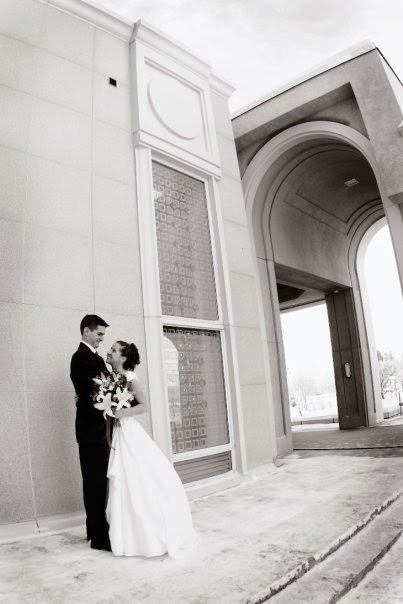 This past Friday, I had the opportunity to attend my cousin's wedding.
As is typical, their sealer gave them a few bits of advice,
and it got me thinking about the counsel we were given when we were married.

One of the pieces of advice we received is one I hear very frequently--"Don't try to change your spouse."
I agree with this, for the most part--although I do feel that we can help one another see ways we can change for the better in a positive, non-critical fashion.
But that's a post for another day.

Today I wanted to write about the counterpart to this advice.
While we shouldn't critically try to change our spouses,
we also shouldn't expect them to NOT change.

It's something that isn't talked about much,
but through the past 6 1/2 years of marriage, it's something I've come to realize is definitely true.
As I look back at the 19-year-old bride I was, I can see that there have been some obvious changes.
Most, I feel, have been for the better.
But as life's stressors have changed, they have also brought out traits that haven't always been good.
And as those traits have been realized, I have worked to overcome them.
But I'm grateful Sam has been patient with me as I have changed through the years.

And just as we change as people, our relationship changes.
While we've grown ever closer,
circumstances have created changes that may not always seem positive on the surface.
If I look back on our newlywed days, I could choose to feel discontented with where we are today.
Constant love notes, sappy e-mails throughout the day, and focused conversations about Gospel insights were threads of our lives back then.
As our life's tapestry has continued to form, our more recent threads have involved midnight baby-soothings, loud dinners filled with jabber of children, late nights of graduate school work, and rare uninterrupted conversations--usually on date night.
But our lives aren't worse. Our relationship isn't suffering.
And while I still appreciate eloquent notes, the continual acts of service displayed in fatherhood mean just as much.
So rather than feeling discontented about the changes that have taken place,
I can find joy in our maturing relationship in which we are continually becoming more unified and working together to raise our children which naturally binds us more fully.

What We Thought We Wanted

When I was just about 5 weeks pregnant with Wesley (just a smudge on the ultrasound!),
I developed a severe case of tonsillitis.
I was concerned about the well-being of our rapidly forming baby, and as my fever took off and my sore throat became more and more severe until it was almost unbearable, we started to wonder if my illness warranted a doctor's visit.
But, as often happens in our family, the sickness reached its peak on a weekend.
And on a graduate student budget, emergency room visits are nothing to trifle with.

As I researched some of my symptoms online, I became convinced I had something called a peritonsillar abscess...a condition that can cause death if not treated.
We determined that I should see a doctor first thing in the morning, but in the meantime, the pain was constantly knife-like, and we had read that if the abscess ruptured it could be very dangerous.
As we knelt together in prayer, Sam prayed for my well-being and specifically prayed that the abscess would not rupture.
At that precise moment, there was a sudden 'pop' and change in my throat, and the pain declined drastically. I was able to sleep that night, and the next morning I told Sam that I felt kind of silly calling the doctor because I felt so much better.
We decided it would still be worthwhile for me to visit the specialist, and as he talked with me about my symptoms and examined my throat, he explained that I did indeed have an abscess but that it had ruptured. When I told him it had swollen to the point that I could hardly breathe while laying down, he looked at me with shock and told me I was very lucky to be alive and that I was very fortunate the abscess had ruptured (despite the risks that went along with that).
Apparently I was in even worse condition than we had realized.

I've thought about this experience a lot.
Isn't it interesting that the abscess ruptured at the precise moment we were praying it wouldn't?
And why?
Because God knew our hearts, He knew our true desires, and He knew what was ultimately best for us.
So even though He didn't answer my prayer in the way we had planned,
His answer proved to be far more in our favor.

Prayer is something I definitely have a testimony of, and I'm learning more and more to surrender my will to Heavenly Father's, because He knows us and our situations so much more fully than we ourselves do.
And He knows what will ultimately bring us the greatest joy. 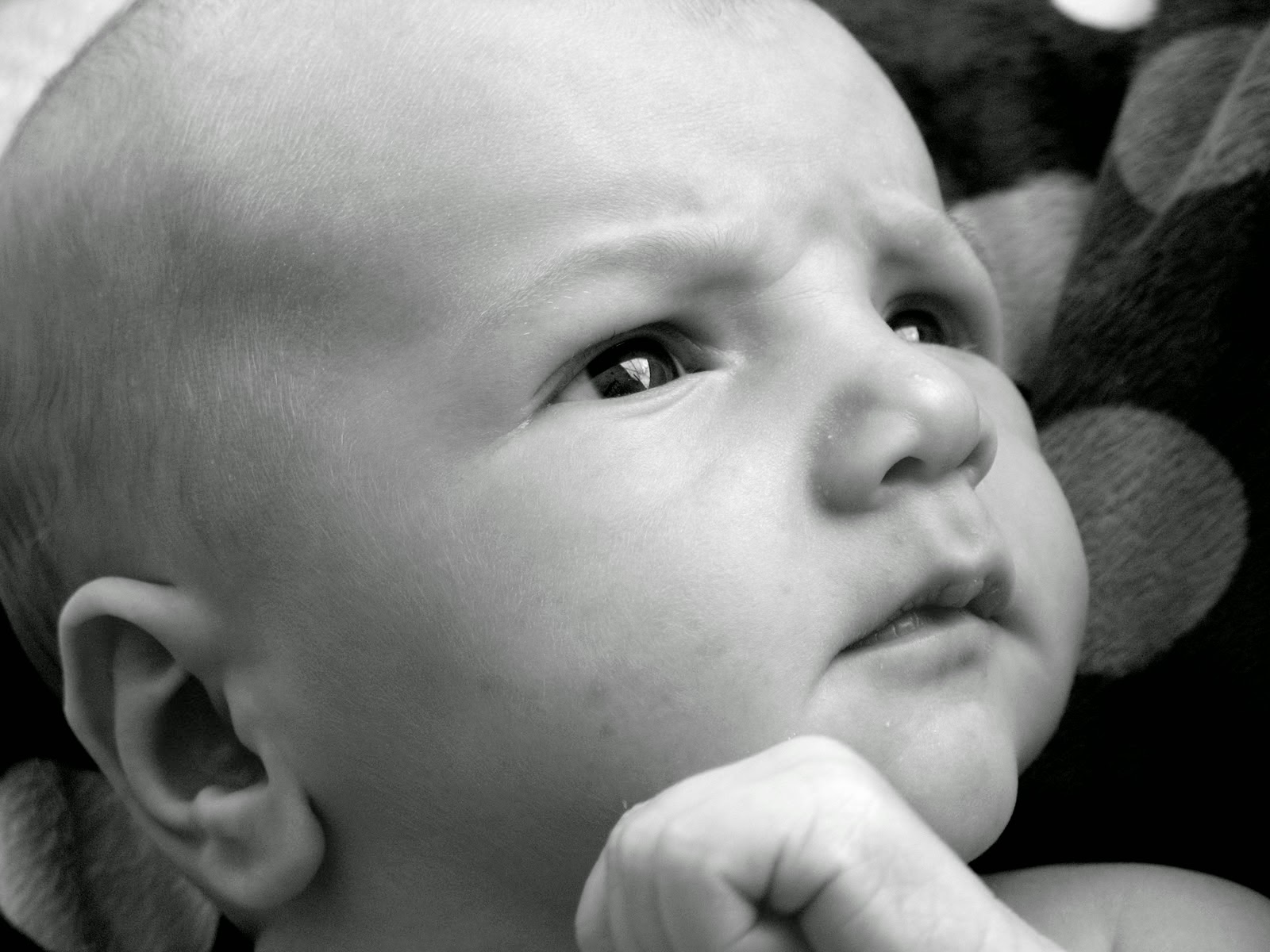