Wednesday was my 37 week appointment. My doctor also had me go in for an ultrasound to get an idea of how big this guy will be. Talmage was 7 lbs, 7 oz and Wesley was 8 lbs, 9 oz. The doctor thought this one would be more around Talmage's size, but we were surprised to learn at the ultrasound that according to his measurements he was already 7 lbs, 4 oz with 3 weeks to go! That puts him in the 81st percentile. Way to go, baby!
My doctor's office is awesome with ultrasounds--this is the 5th one I've had with this pregnancy, and it's so fun when they flip on the 3D! He was pretty set on staying hidden behind the placenta, so we couldn't get a full view of his face, but we got a couple of pretty good shots. 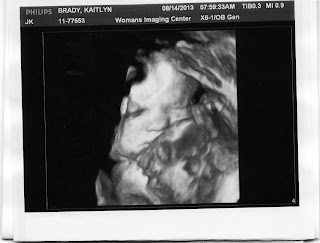 I love seeing his chubby little face all squashed in there! It really is amazing what they can do with technology. Sam and I think he looks a little more like Wesley, but it's hard to really get a good idea with him being so squished in there. 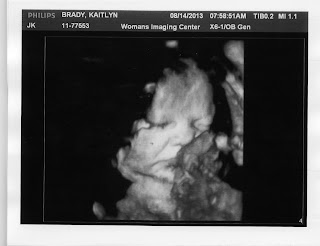 And we were also surprised to see this: 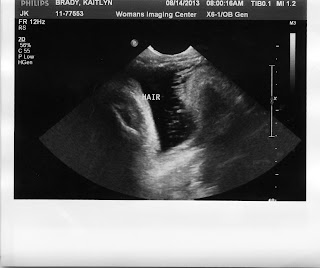 This is a shot of the base of his skull, right above his neck. See that hair sticking out in horizontal lines down the middle of the photo? Maybe he'll have more than our first two. I guess we'll find out before too long!
I showed Talmage and Wesley the 3D pictures, and I wasn't sure Wesley could really pick out the baby. So I asked him to point out the different facial features and he could totally see it! He loves looking at the pictures.
Everything is looking good for delivery. I learned that I was already at a 3, which was encouraging, although I started progressing early with Wesley as well and he was 10 days late, so I'm not putting much stock into it! I am trying to make sure we're ready though.
I also learned that I am quite severely anemic. The blood test results came back and my hemoglobin level was down pretty far (normal at this stage of pregnancy is 10-11, mine was 7.6). "Severe" anemia is classified as being under 7, at which point hospitalization and blood transfusions are likely possibilities. Because of problems I've had with my first two deliveries concerning blood loss and blood pressure dropping way too low, we're really going to have to stay on top of the issue or I may end up with several blood transfusions when I deliver.
Right now they have me on iron supplements (which make me super nauseated...hello again, first trimester) and they're hoping to boost my hemoglobin levels up one full number by the time I deliver. (Anemia takes several months of treatment to recover from.) As much as I didn't really want to have that issue, it's so comforting to know there is an actual reason behind my complete lack of energy and inability to exert myself.
We are so excited to meet this little guy--it's hard to believe that he should be here within 3-4 weeks! Some say adjusting to 2 kids is the hardest and others say adjusting to 3 is the hardest (you run out of hands). I'm trying to focus on making the transition as easy on my older 2 boys as it can be. There is definitely anticipation in the air!
Posted by Kaitlyn at 12:09 PM