For anyone who hasn't heard, we are expecting another baby BOY! The due date is September 4, which makes me about 22 weeks along right now. We are so excited to have a trio of little boys running around playing together. When I see how much fun Talmage and Wesley have together, I get even more excited to add another one to the mix. The picture below was taken at 20 weeks. I feel like I'm showing more than that in person, but it gives the general idea. 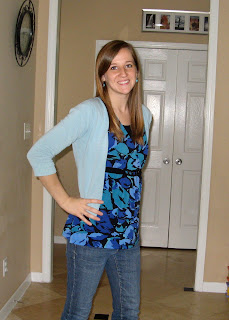 And here are some ultrasound pictures of the little guy! After they took the measurements they brought Sam in. He took one look at the screen and said, "This one looks more like Talmage, don't you think?" He could tell at Wesley's ultrasound that he was not going to look like Talmage. He said it was obvious that his eyes were farther apart. Ha! I don't know how he can read them so clearly! So time will tell if his observation this time around is just as accurate. 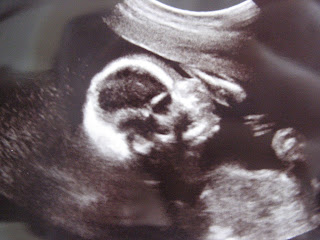 All 3 of our boys have had their hands up by their faces the whole time during their 20 week ultrasounds, and every time the ultrasound tech has commented on it. Talmage would NOT stay swaddled because he always wanted his hands up by his face after he was born. As Sam said, "He's got to find something to play with in there!" In this picture you can see his left arm bent up with his fist resting on his cheek (going sideways). 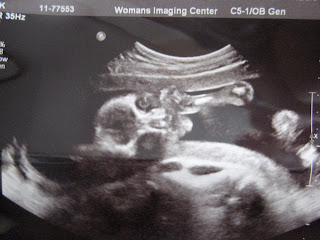 They do 3D ultrasounds by default here, as well, so we got to see some pretty amazing shots of this little guy! I love this one. It looks like he has a little smile! Just posing for the camera, I guess. :) 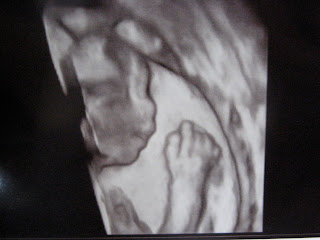 Here he is showing off his muscles for us. Look at that arm! It looks like he might have Wesley's super-muscular upper arms. 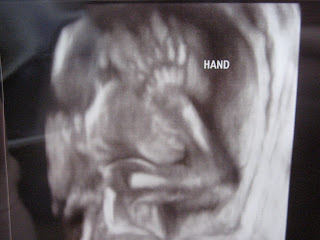 Here you can see his spine, his little bottom, and his feet crossed and tucked up underneath him. 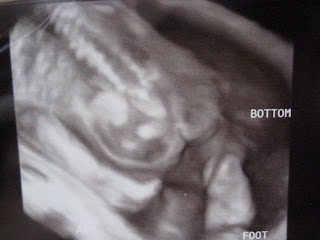 This isn't the best image of his face, but you can see his open mouth with his hand in it if you look at the middle of the picture, about 2/3 of the way down. It was so cute to see him sucking on his hand. 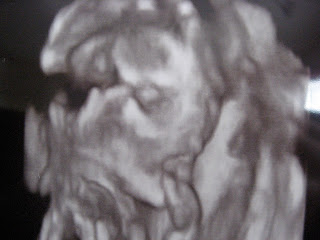 And just because I think it's amazing, here he is at about 6 1/2 weeks along (he is between the plus signs). He was really no more than a small line on the screen, but the incredible thing was that we could already see his little heart beating in there. 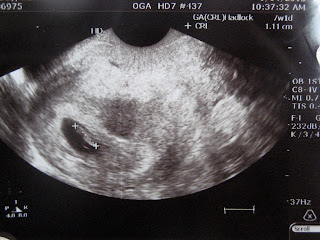 By 9 weeks we had a peanut. 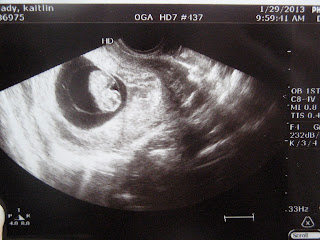 And by 12 weeks there was no question what was on the screen! I am always amazed at the change that happens in less than 6 weeks. 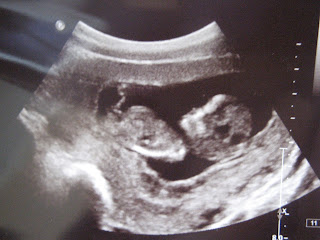 We certainly are eager to meet this little man! Talmage told me excitedly the other day, "Look! Your belly's getting bigger! It looks like a nose." Definitely the best pregnancy comment I've ever received. :)
Posted by Kaitlyn at 12:38 PM