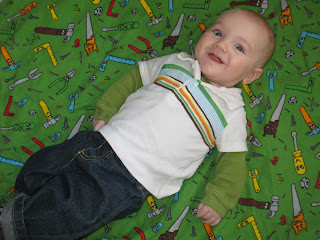 He is extremely wiggly. For the last month or so he has been scooting himself all over the place, although it has only recently become intentional, I think. He doesn't like to be on his stomach, though, so he lays on his back and pushes off with his feet. I frequently find him with his upper body under Talmage's bed. 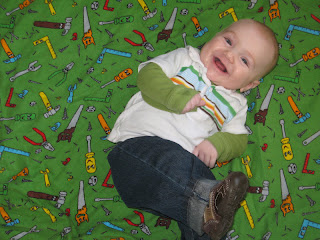 He has super high pain tolerance. When he was 2 weeks old, they had to do the 2nd PKU screening (the one where they get the blood droplets from the heel). He didn't even cry when they jabbed his foot with that huge needle! And then, at his 4 month check-up, he got two shots without crying as well. He looked a little disturbed at the first one, and then the nurse warned me the second one would really hurt him. She gave it to him and he just started making a few loud grunts that stopped when I picked him up.
Talmage often rides him like a horse, even bouncing up and down, and as I stop him and tell him it hurts Wesley my words aren't very believable because Wesley just smiles. The other day Talmage was saying prayers and Wesley was sitting on his bed. I had my arm across his stomach so he wouldn't fall off, but he dove forward and somersaulted over my arm and landed on his back on the floor. My eyes flew open and I worriedly looked down to see him looking somewhat startled, but again, not even crying. He just smiled when he saw me looking at him. Also, last night I discovered he has a tooth! His top left front tooth has come through, and I didn't even know it was coming because he wasn't drooly or fussy! Sometimes I wonder if he has a normally functioning nervous system... 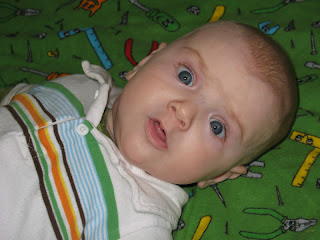 He is still spitting up a lot. When Talmage was a baby, I talked to the pediatrician about how much he spit up. He told me there were two classes of spitters:  those who experience pain when they spit up, and those they call "happy spitters." Yep, I think this boy can also fit into the category of a "happy spitter!" This is a very frequent image at our house! 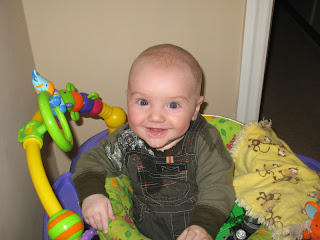 He wasn't crying here, but he was definitely trying to free himself of the Bumbo. He started doing this just a couple of weeks after he got it for Christmas, actually, so we don't use it as often as I had imagined... 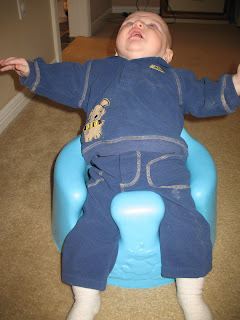 Sadly, he doesn't like riding in the car very much if the car ride is more than a few minutes long. 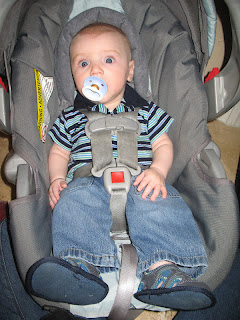 Talmage is his favorite buddy--he always wants to watch what he is doing and smiles and laughs at him all the time. He LOVES fruit and tolerates some vegetables, namely pumpkin and peas so far. He concentrates very intently on whatever catches his interest. 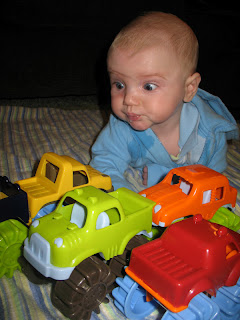 We love this little boy! He has such an innocence and enthusiasm for life. He is a spot of sunshine in our lives!
Posted by Kaitlyn at 12:32 PM