We have been meaning to bless Wesley for quite some time. We wanted to do it when Sam's mom and brother were here so his brother could stand in the circle, but it happened to be Stake Conference when they were here. So we made plans to do it the first Sunday in December. We neglected to remember to call a couple of friends in the ward to participate though, until the night before. So we decided to do it the following Sunday. That happened to be the day we took Wesley to the ER and spent a couple days in the hospital, so we finally got to bless him on Sunday, December 18.
Since we don't have any family close by, we weren't having a dinner or anything like that, so my one request was that we get a family picture with Wesley in his blessing outfit. Perhaps you can find some humor with me in how the day went:
-Our car broke down the day before so we had only one car and Sam had his meetings before Church started at 8:30. So he hurriedly came home in between his meetings and Church to pick us up.
-We got to Church, Sam took his place on the stand, I got a little girl to sit with the boys, and I went to play prelude music on the organ and help accompany.
-Sam, who was conducting, announced Wesley's blessing and I hurried down from the organ, got Wesley, handed him to Sam, and stayed with Talmage while Wesley was blessed.
-Sam then handed Wesley to me, I turned around and handed him to the woman sitting behind me, and then hurried back up to help play the Sacrament Hymn.
-After the Sacrament was passed, I took Talmage and went to feed Wesley.
-I got back into the chapel just before the intermediate hymn was to be sung and hurried back up to accompany that.
-After playing the closing hymn, I quickly gathered up our things and Sam took Talmage to nursery while I stopped at the library to get a few supplies for Sharing Time in Primary.
-The library (which isn't open before Church, so I had to go between Sacrament Meeting and Primary) was very busy and there was difficulty in finding my supplies.
-Sam helped me bring the large TV, movie, and pictures down to the Primary room.
-Primary had already pretty much started and I was supposed to conduct since the president was out of town.
-Because of a series of events I had only 5 minutes for Sharing Time so I quickly shared an abbreviated lesson.
-After Church we needed to hand out new manuals to the teachers and set up more chairs for the next ward.
-Wesley was still trying to get back on track with his eating and weight after his hospital stay and weight loss, so screamed the whole time we set up chairs.
-Sam returned the things to the library
-I hauled Talmage, Wesley, Wesley's carseat, Talmage's nursery handouts, my church bag, my purse, a large wooden block the Relief Society gave out for Christmas, and 2 coats to the Mother's Room to feed Wesley again.
-Sam helped process tithing and then we had tithing settlement, after which I hurried to a baptism since I needed to do the Primary welcome (again, since the President was out of town).
-Sam dropped off tithing at the lockbox at the bank and came back for the very end of the baptism.
-The pianist had to leave after the opening song so I filled in for her. Again, Talmage and Wesley were left with friends while I played the piano.
-We finally got home from Church way past Talmage's naptime, Wesley's front was completely yellowed with copious amounts of spit-up, he had blown out of his diaper all over his blessing outfit and I gave up on the family picture I had hoped for.
-Talmage napped and Sam left to take the missionaries to a fireside in Sugarland, returning around 9:00 pm.
-And that was that.
On days like that I just have to laugh and wonder how--when I can barely manage things at times with two kids--I will be able to manage many more. I guess we just take things one day at a time, huh?
Anyway, if you made it through all of that text, congrats! I dressed Wesley in his (freshly cleaned) blessing outfit a few days later and took some pictures of him so we could at least have those. Enjoy! 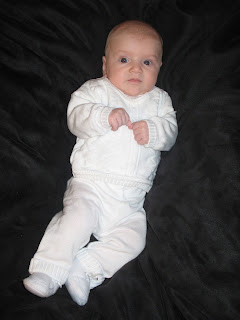 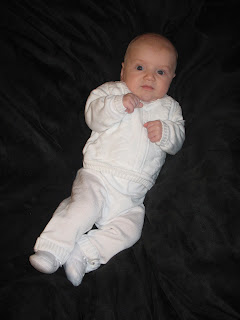 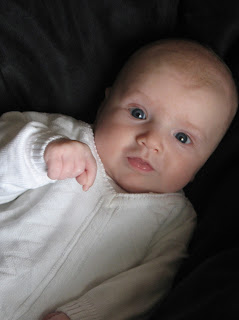 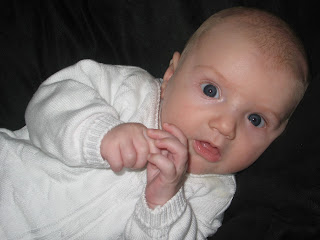 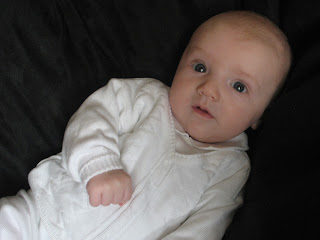 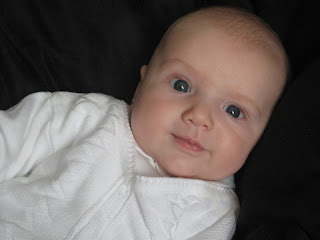 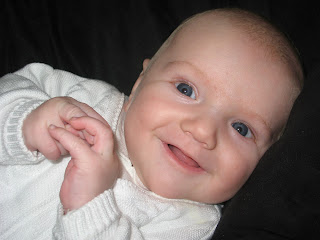 This is his typical camera face. 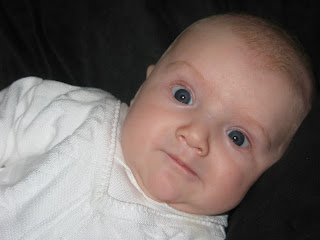 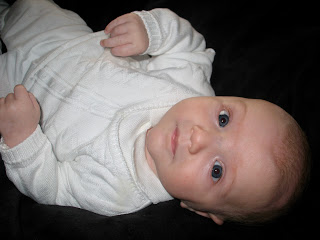