Here are a few of the things Talmage loves these days...
#1: Puzzles-Oh boy, does he ever love puzzles. He also loves a challenge. He gets bored so easily and always wants to do things that are hard for him, which is a great quality! It just makes it hard to keep him entertained with toys. :) A month or so ago I picked up some used puzzles that said they were for ages 3-6 and he mastered them within days! He will work on puzzles for such a long time. 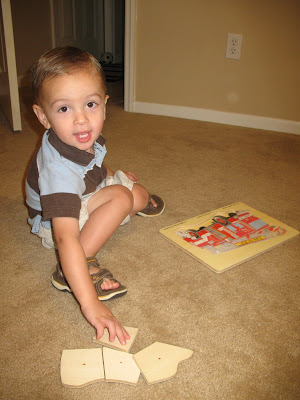 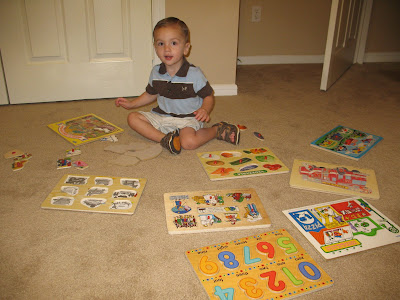 #2: Books-Nothing new here; he has always loved books. But he still delights in them. He would probably be content if I would read him books all day long. 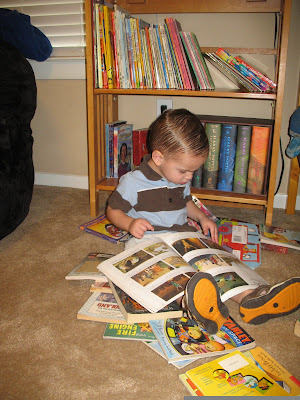 #3: Laundry-He especially loves folding towels. He gets so excited to help with the laundry and immediately pulls out the towels to fold them. For a long time he would bring me a towel and ask me to fold it while watching my every move intently. Then he learned how to do it! Note how well he matches up the edges... 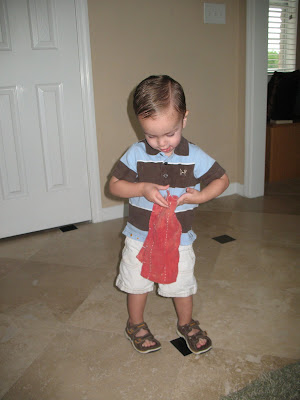 He shakes them out to straighten them and even climbs up on the couch to put them on the back of the couch where I normally stack them. Folding laundry while he was awake used to be pretty difficult, but this little obsession has made it a fun activity for us. 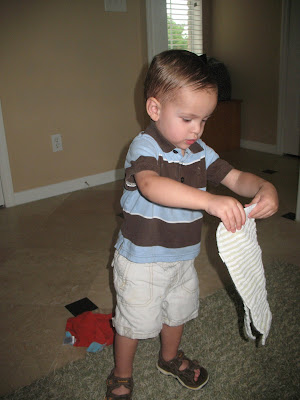 #4: Letters-T is his favorite, of course. Today we were in the grocery store and there was a scrolling marquee 30 yards or so away. Talmage stiffened as he noticed a T on the screen and began pointing and shouting, "T! T!" He also loves learning and picking out other letters. He doesn't love numbers quite as much...he does pretty well with counting, but he tires of it really easily. We'll keep working on it. 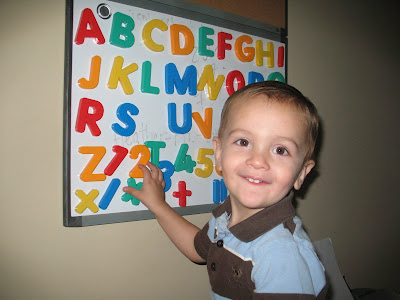 #5: Shapes-He recognizes and points out circles, squares, rectangles, triangles, stars, hearts, diamonds, and pentagons. I am running out of basic shapes to teach him! He finds shapes anywhere and everywhere--like in the ring of water his cup leaves on the table or in a marking on a rock. Again, he loves a challenge, so for a long time he would ask me to draw a circle and he would watch what I did until he could draw a pretty good circle. Now he always wants me to draw a star or a pentagon and imitates what I do. His attempts at stars are zig-zag lines at the moment. 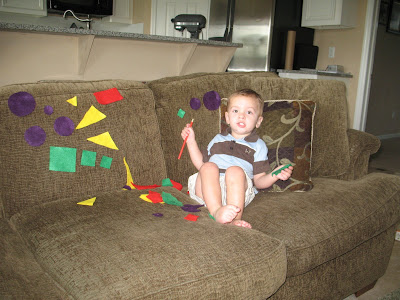 #6: Colors (sorry, no pictures for the last ones)-He still gets some mixed up, but he's pretty good with red, yellow, orange, green, blue, purple, brown, black, white, tan, and pink. He loves pointing them out too, but not as much as he loves shapes.
#7: Sleeping under the bed-A couple of hours into his sleep I discover that he has gotten off of his bed and crawled under it to keep sleeping. Somehow I feel like a bad mother leaving him there, but when I move him we find him right back under there a short time later.
#8: Stacking, sorting, etc.-I am pretty obsessive-compulsive about order and organization. I use a spoon to spread peanut butter on sandwiches so I can smooth the surface in the jar when I'm done, I hang our clothes by color (even my socks are sorted by color from lightest to darkest and from lightest to darkest within each color), and for a while as a teenager I even started being bothered by the dirty clothes in the hamper and wanted to fold them before I put them in. I am seeing some of these same traits in Talmage. He loves to stack the same size blocks together, he puts things back in their place when he's done, he loves helping me clean up, if he finds a miscellaneous speck on the floor he grabs it shouting, "Garbage! Garbage!" and throws it away, and he loves sorting things. One day he took out a bunch of different sets of mixing bowls from the cupboard and re-stacked them all together in one big stack in almost perfect order from biggest to smallest. It is so funny to see him showcasing these traits!
He is growing and learning so much every day. I love watching his personality emerge more and more as he develops.
Posted by Kaitlyn at 7:28 PM