This post is kind of all over the place, but it will help me get caught up.
Talmage enjoys lounging in his carseat. I often look back and see him sitting like this: 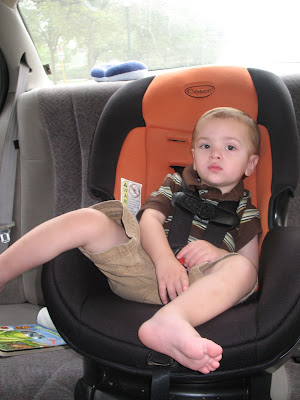 Wow. His facial expression makes him look like he is a teenager with an attitude or something!
Ah, that's better. 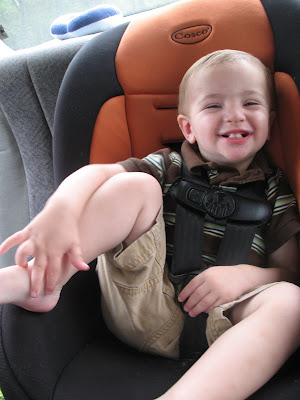 We wanted this style of carseat and found a great sale on them. When we went to buy it (this was back a year or so ago), they only had orange/black ones. :( I settled for it, so we now have a Halloween carseat. I am thinking I will be sewing a new cover for it before too much longer...
Talmage loves pretending of any sort. Pretending to cook is a favorite. 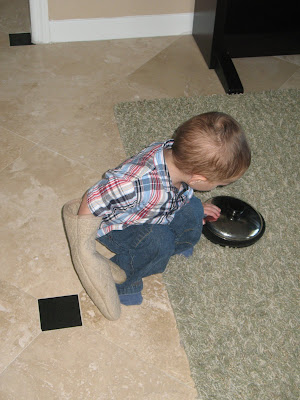 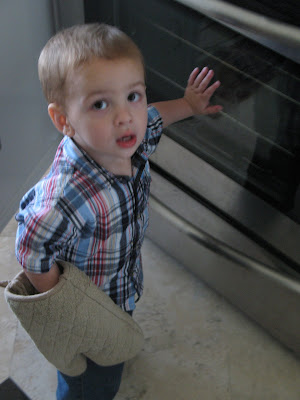 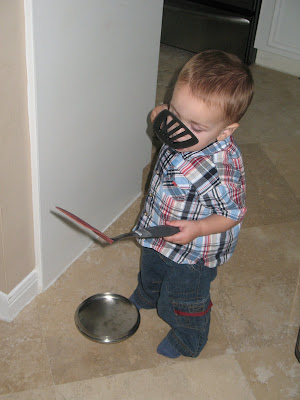 Here he is on his first day of nursery! He absolutely loves nursery. I set him down on the first day, he promptly ran over to the toys, and didn't look back as I left. The second week, we were nearing the nursery room and he started fussing because he wanted me to put him down so he could go in and play! When we were at Sam's sister's ward in Tucson, he enjoyed nursery so much he only glanced at me when I came to pick him up and then continued on in the crawling race he was having. I think he liked the male nursery leaders they have in their ward. 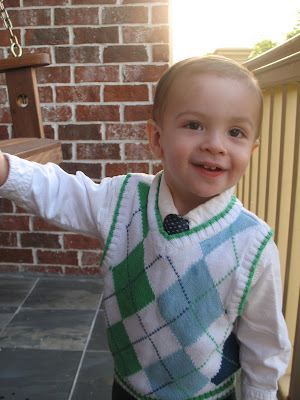 One week, one of the kids brought cupcakes to share for snack time. (I know, in nursery? What a nightmare!) Talmage was enjoying his so much (and using the frosting like hair gel) that the leaders took a picture of him and sent it to me. 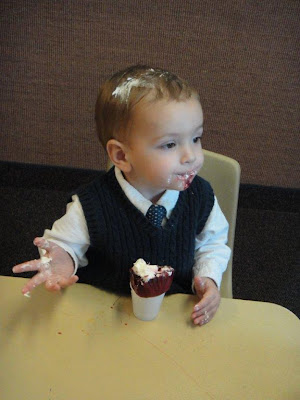 I just think he is so adorable. 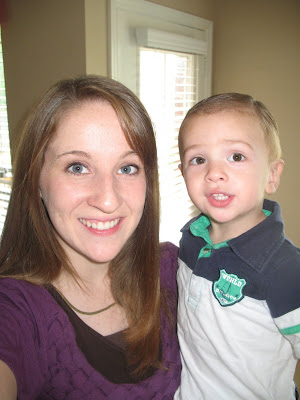 I guess I'm biased, but check out that grin! 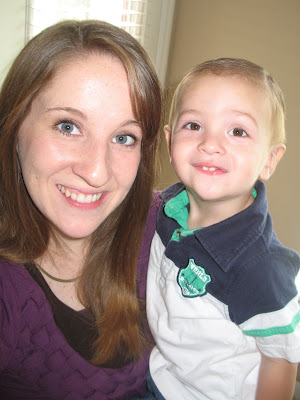 He is so skinny he can (or could when this picture was taken a few weeks ago) slither up to a standing position in his high chair even when the tray is pushed all the way in and then climb out onto the counter. Here he is saying, "No, no!" because he was going to grab something he shouldn't. He looks pretty pleased about it though, doesn't he? 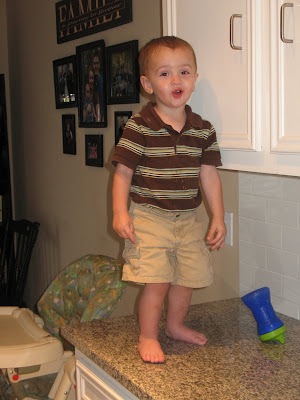 The other day I took his tray off to wash it off, leaving him sitting in his chair with just the small half-tray holding him in. I realized he was going to climb on the counter, so I turned around about 5 seconds later to grab him, and he was standing on the ground behind me, looking just as shocked as I felt! I guess he stood up and somehow lowered himself to the ground? And he did it all silently in a matter of 5 seconds.
Love that face. 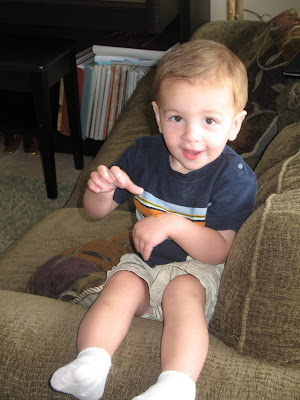 Pictures like these remind me he is still my toddler. 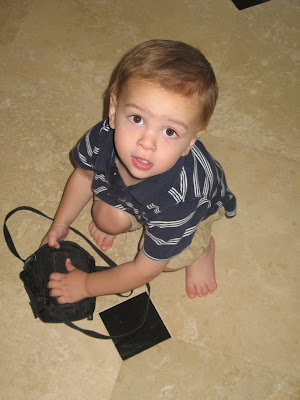 Just a second or two later I took this picture, and he looks so much older in it! Or is it just me that thinks that? 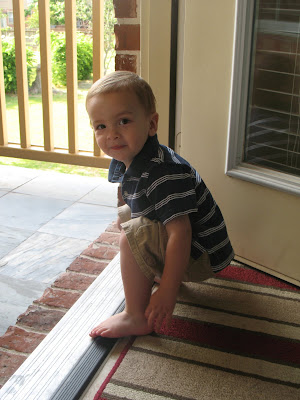 Here he is folding his arms. For some reason when I wanted to take a picture, he would lift them up to his forehead, but he loves to fold his arms. He also loves to pray and says spontaneous prayers all throughout the day. He will run up to me with his arms folded, muttering a prayer and then yell, "Amen!" This weekend we attended a Baptist funeral, and that was kind of a new cultural experience for me. Talmage got very into it, because every time somebody would call out "Amen" he would holler it too. :) 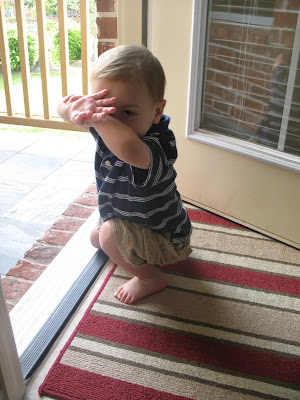 Every time I comb his hair and then try to take a picture... 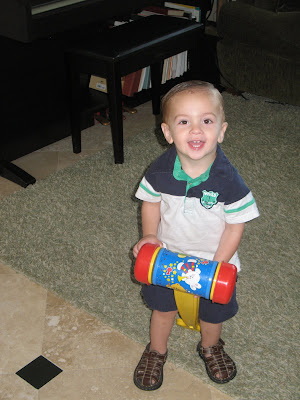 ...he reaches his hand up and rubs it around on his head to mess up his hair. 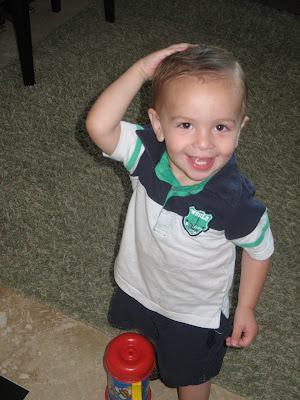 He thinks it's hilarious! 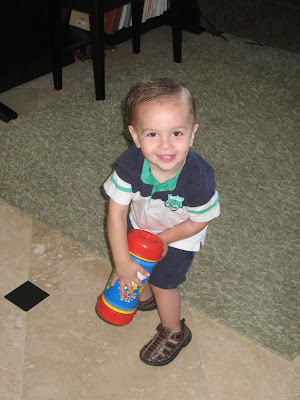 We were making some of our favorite muffins that have lots of pumpkin and bran in them, and Talmage decided to paint on the wall with the pumpkin. 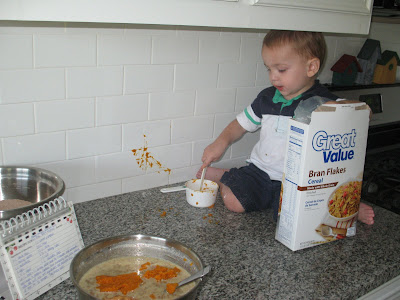 He loves pushing around the empty laundry basket. In fact, that's what he's up to now. 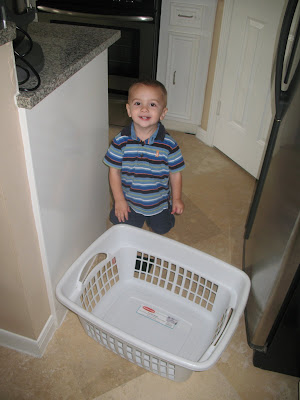 To look at the pictures I have of Talmage, you would think I like striped polo shirts or something, huh? :) We love this little boy. Sometimes I want to freeze time because he is in such a cute phase and I know I will miss so much of what he says and does right now.
Posted by Kaitlyn at 12:44 PM