Last August, when my sister Breanne came to visit, we dropped by to see Bayou Bend Gardens. We were told that springtime is the prettiest because all of the flowers are in bloom. So a couple of weeks ago we made a return to the gardens, and this time Sam came with us! 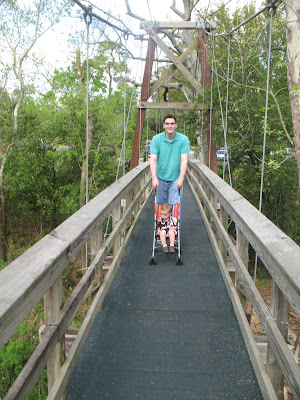 The flowers really did add gorgeous splashes of color. 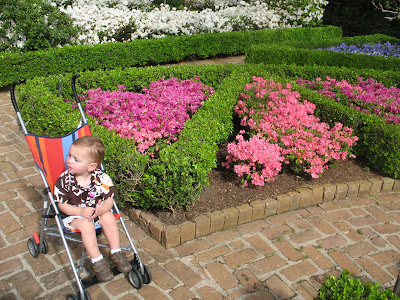 Sam and I try very hard to go on a date every week. But it gets tricky to arrange a babysitter every week! There aren't that many babysitters in our ward, and we do swap with other parents as much as we can, but sometimes we still end up with Talmage in tow. Thankfully he is usually very good-natured while we are out and about. He was particularly happy here! 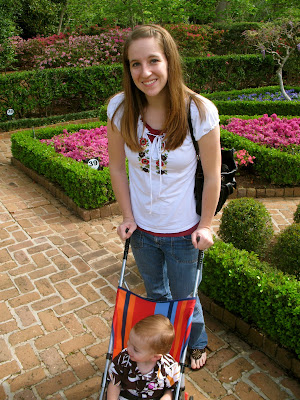 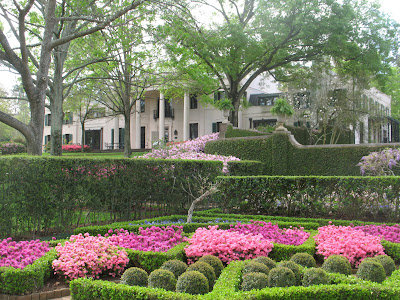 Beautiful flowers--someday I hope to create a sanctuary at a house of our own with lots of flowers and trees. 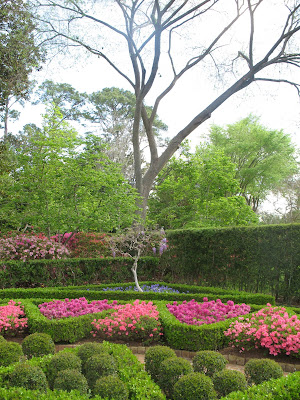 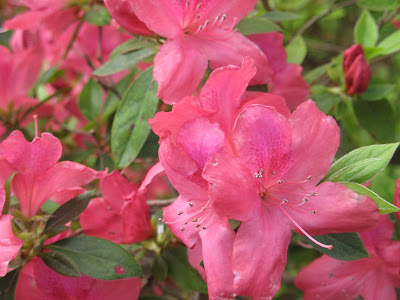 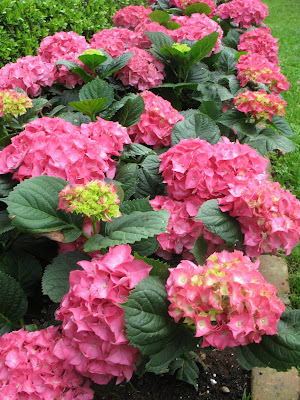 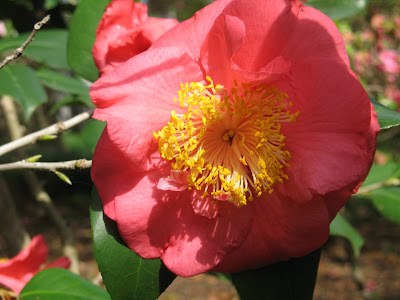 Talmage was in awe of the fountains. 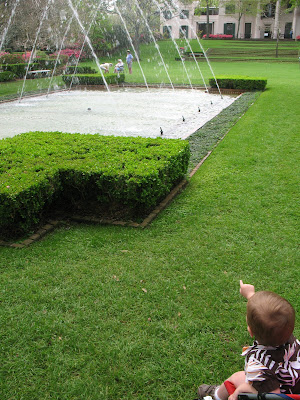 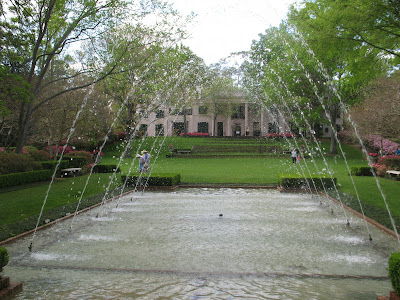 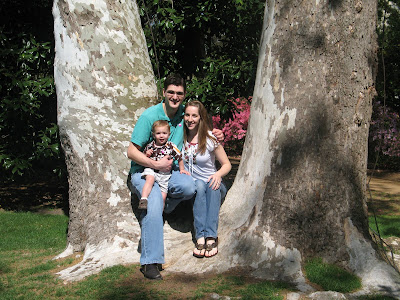 Sam was trying to take an overhead picture of the butterfly garden (pictured below this picture), and this is how one of them ended up. I thought it was artistic... 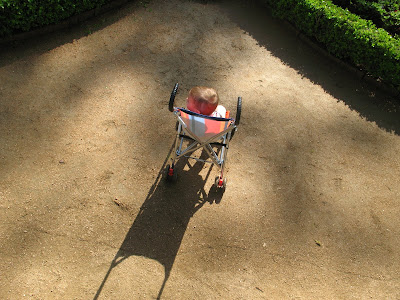 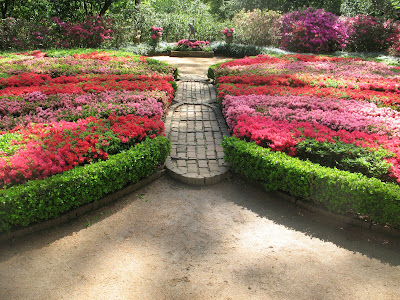 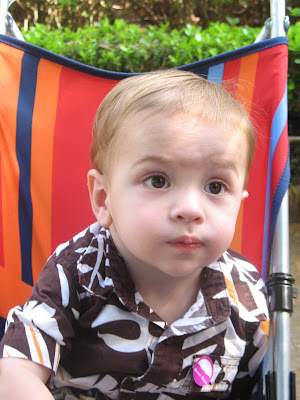 We spotted this tiny snail on the ground! It's not even as big as my fingernail! 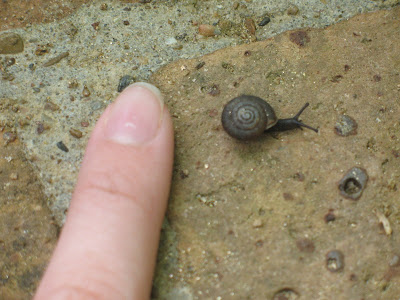 We are always looking for cheap/free, creative, fun things to do for our dates, and these gardens were an absolutely delightful place to spend our Saturday morning.
Posted by Kaitlyn at 10:06 AM 3 comments: 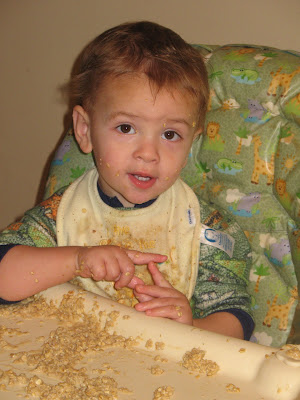 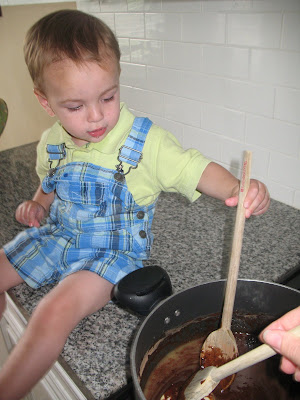 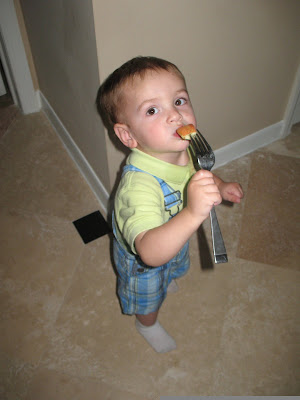 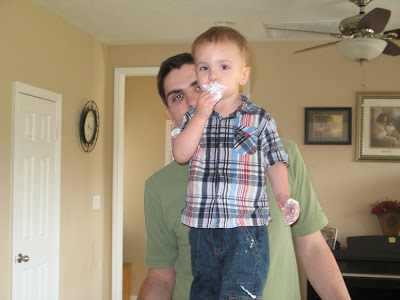 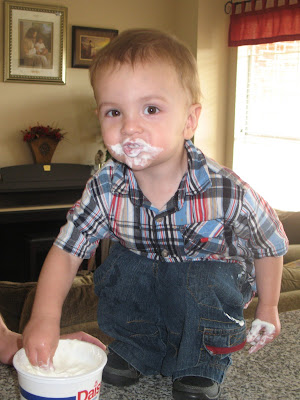 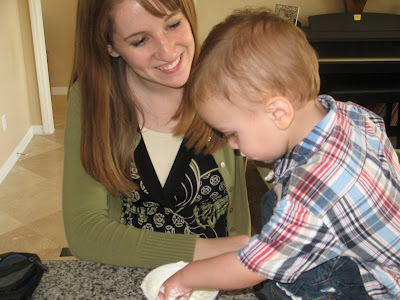 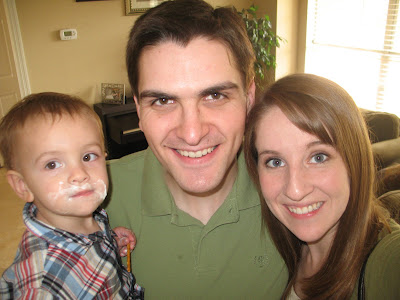 P.S. Pardon his messy hair in all of these pictures! I finally cut it and it stays in place much better than it did when these pictures were taken. Just don't look too closely at his hair...a certain wiggly person didn't like the clippers and kept trying to grab them from me as he jerked away from them. Cutting Sam's hair is easier. :)
Posted by Kaitlyn at 9:46 AM 4 comments:

It will finally let me upload pictures again! Google was apparently having some massive problem, and it has finally been resolved. So get ready for some catch-up posts...
For now, here are the two faces I tried to post way back when:
Studious 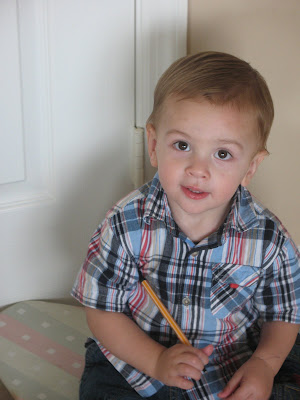 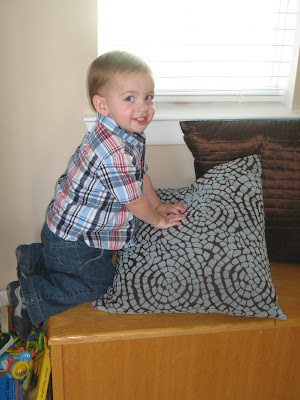 So today was Talmage's 18 month well baby check-up. He is 33 inches and 22 pounds...making him in the 85th percentile for height and the 8th for weight. Yep, that sounds about right. He is extremely picky, it's true, but I really think he eats an okay amount. However, he runs pretty much non-stop throughout the day! Add that to his naturally high metabolism, and you have our tall, skinny boy. :)
And here is a funny little anecdote. I'm not sure where he got this from--perhaps he picked it up from all the Hispanic people that live in Houston, or maybe he is saying something else and I am misunderstanding him. But about half the time I ask him something he should respond to with his characteristic "Yeah," like he used to always do, he shouts out, "Si!" It always catches me off guard and makes me smile.
Posted by Kaitlyn at 2:40 PM 3 comments:

I am still having trouble getting pictures on here, and I have tried a couple of different methods! I'll try to get things resolved soon...
Posted by Kaitlyn at 7:10 PM 1 comment:

My picture uploader is being spastic, so I decided to post some of the random thoughts that have been floating around my head.
1. Conference! It's today! It has been one of my favorite times of year since the time I was very young. My parents would buy a stunning array of treats in preparation for our "Conference party," in which we would sit around, munch on goodies, and enjoy the spiritual enlightenment that comes from our Church leaders. Now we have a party of our own as we watch Conference on a laptop here in Texas.
2. Yesterday I had an appointment with the ENT. A couple of months ago, I had a horrible bout of tonsillitis that spread into a peritonsillar abscess which ruptured and caused some other issues. The ENT basically informed me I was lucky to be alive at the time. Fun stuff, right? Anyway, the ENT was checking on it yesterday and it happened to come up that I am a Mormon. Despite the fact that he is a well-educated doctor, he had all kinds of strange notions he started sharing with me. He was shocked as I quickly informed him that no one in the Church was allowed to practice polygamy and corrected his other misconceptions. I think he was rather amazed that I seemed fairly normal. It was such an unexpected conversation! I just wish I had given him a pass-along card or something. Well, our appointments will continue, so there's always next time, right?
3. Talmage is unbelievably hilarious. I often just stare in delight and amazement to see how goofy he can be! He has always been incredibly social, walking up to random strangers and striking up a conversation with them, then moving on to the next person he can see. He just thinks people are so interesting and wants to be friends with everyone! His latest thing is his obsession with shaking hands. When we are checking out at the grocery store and the cashier gives me my receipt, he immediately waves and says, "Bye-bye," and then thrusts out his hand to shake their hand. He insists on shaking hands, and he will lay pretty much horizontal out of the shopping cart, making them stretch their arm all the way across the counter. Yesterday he ran up to someone who entered the waiting room at the ENT and shook her hand. Later, back in the examining rooms, he started playing games with the nurses at the nurses' station and threw a huge fit because I wouldn't let him go see all the other patients in the examining rooms. He did manage to sneak a peek into one, and it happened to be the same lady whose hand he shook, who was now with her husband. I could hear them talking about his antics as he grinned at them and then ran away. What a boy!
4. Since Sam studies cancer, one of the things we try to do is avoid carcinogens, or cancer-causing things in food. This includes a lot (but not all) preservatives. Nitrites, which are found in lunch meat, bacon, ham, etc. are on the black list. In fact, a study found that people who regularly consumed lunch meat preserved with nitrites had a 60% higher incidence of pancreatic cancer, which is typically pretty much an instant death sentence. Anyway, not to get on a soap box or anything, but this explains why I was so excited when smoked, uncured bacon without added nitrites went on sale at Kroger. So instead of being about $8.50 for a package, it was $3.99!
5. Kroger also put their grapes on sale for 99 cents/pound. I bought about 10 pounds and froze a bunch of them. Frozen grapes are one of my favorite summer treats--if you let them thaw just a tiny bit, it is kind of like eating a slushy in grape form. Yum!
6. Did you ever do logic-grid puzzles in junior high? They are some of my favorite logic games ever. There is a great site that has a bunch you can do online here. This week got a bit crazy for Sam in his lab with a grant proposal due yesterday, and with Conference today we didn't get a date. So instead, last night we started figuring out one of these for our "stay-at-home date." Exciting, right? :)
So there you have it...a few of the random Saturday-morning thoughts of Kaitlyn. Have a great weekend, everybody!
Posted by Kaitlyn at 5:26 AM 3 comments: