Talmage at One Month

Talmage turned one month old on Wednesday! He is learning and growing at an astounding rate. 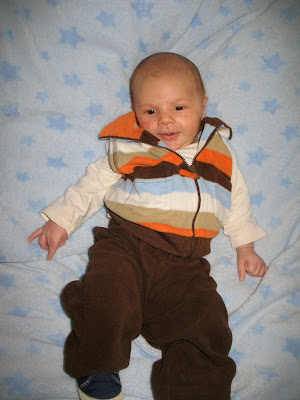 This past week has been a big one for becoming a better sleeper. The last couple of nights, Talmage has slept from 9:30 or 10:00 pm until 4:30 or so in the morning without being fed, and usually only waking up once! He is showing me more and more his preference to be on a schedule, just like his daddy. He wants to eat according to his schedule and sleep on a schedule, and if his schedule gets messed up, he is typically a bit more stressed throughout the day. He is also very time-efficient...especially when it comes to eating! He is growing really well, so I know he is getting enough to eat, but he generally completes the job in just 12-15 minutes! He has gotten too tall for many of his clothes, so although he still isn't filling them out too much, I think we'll be pulling out the bigger sizes soon. 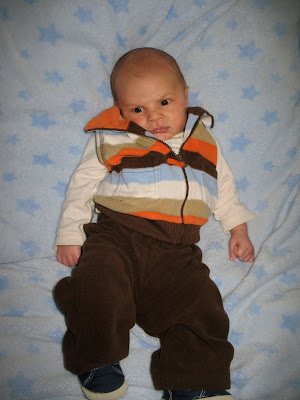 Talmage is still a very well-behaved baby. He prefers to grunt to let us know when something is bothering him, rather than cry. However, he has had a bit of a rough time the last little while because of some digestive issues he has been having. He burps, hiccups, spits up, and passes gas a lot, and it is pretty much only during these times of internal disturbance that he cries. Strangely, the hiccups seem to really calm him down rather than aggravate him further. Perhaps it is because of his stomach issues that he shows a strong preference to being held upright, in a burping position, with his back being patted. He also really enjoys being snuggled tightly. 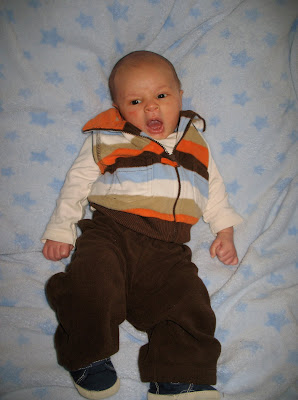 Talmage really loves rides in the stroller and rides in the car. He loves staring at the pictures on the wall with intense concentration. The other day, Sam came home from school and took Talmage around the house, showing him the different pictures and talking to him about them. Talmage loved it! He also loves playing Pat-a-Cake, as is seen in the movie posted below. He also loves it when we eat his face with kisses, pedal his legs in bicycle motion, and let him fly like an airplane above our heads. He absolutely hates being forced. I mentioned previously his adamant refusal to eat more if he doesn't want to, and that iron-will is seen in several aspects of his life. He still loves music, and he will sit quietly listening to me play the piano for quite some time! He likes to be outside on our balcony, carefully studying the surroundings.
We still marvel at the fact that we get to be his parents. We are enjoying this journey and delight in the new aspects of life our little Talmage shows us.
Posted by Kaitlyn at 7:25 AM