I thought since I don't yet have a baby to blog about, I would post an entry about the baby shower the girls in my ward threw for me the other day! It was so much fun, and so nice of them to do it! The theme was dirty diapers, and almost everything was centered around that central theme. It was very creative! I thought I would share the games we played in order to spark ideas in any blooming baby shower planner!
Game #1:  Everyone was given a clothespin to put on their shirt at the beginning of the evening. For the rest of the night, the word "baby" was forbidden, and if you caught someone saying it, you could take their clothespin, along with any others they had collected from catching others saying it. At the end of the night, whoever had the most clothespins won!
Game #2:  A bunch of diaper/safety pins were placed in a bowl of rice. Each of us was blindfolded and given 30 seconds to dig through the rice and try to find the safety pins (this is MUCH easier said than done! The safety pins feel just like rice, even though it doesn't seem like they would!). The winner was the one who pulled out the most safety pins. 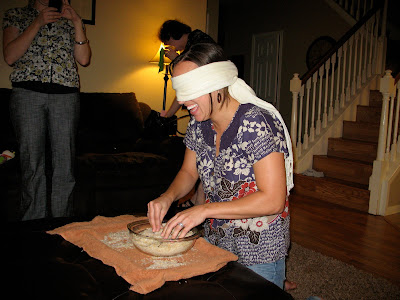 Game #3:  In the middle of a circle was a doll, a diaper, an outfit, a stroller, a hat, a bib, and oven mitts. We passed around a dice, each person quickly rolled it, and whoever got a six had to go in the middle, don the bib, hat, and oven mitts, and proceed to diaper/dress the doll. If someone else got a six, they would quickly take over. The goal was to be the one to finish dressing the doll, put it in a stroller, and race it down to the end of the kitchen and back! 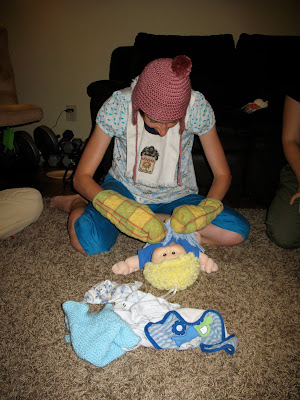 Game #4:  For this game, 5 different candy bars were melted in diapers, and our job was to figure out what candy bar was in each of the diapers through looking, smelling, and tasting them. They looked quite realistic, and it was rather funny to see everyone with their noses in dirty diapers! 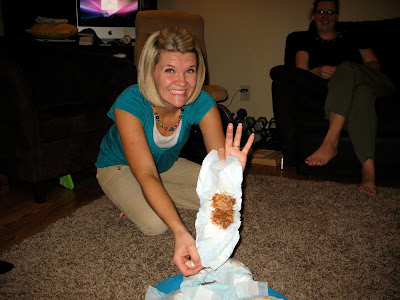 Game #6:  We had an eating contest! Some chocolate chip cookie dough ice cream was softened and spread in diapers, and we raced to see who could eat the ice cream the fastest...without using our hands!
Game #7:  There were paper diapers hidden under each seat. We all looked under our seats, found the diapers, and opened them. One was dirty (peanut butter style), and the person who had it was the winner!
The presents for the winners consisted of things to help with dirty diapers, such as air freshener, hand sanitizer, lotion, and wipes. And then I was given tons of DIAPERS (well over 400) and other gear to get us through the first little while! It is so appreciated.
One of the girls made a darling cake out of diapers, bottles, burp rags, etc. 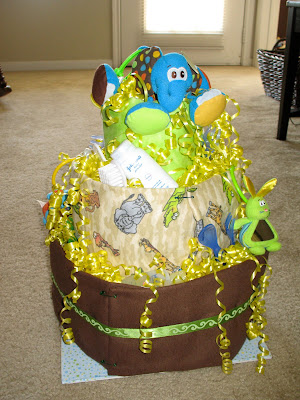 And of course, there was lots of yummy food. It was such a fun night! Thanks to everyone for the gifts, for putting the shower together, and for being so creative.
Posted by Kaitlyn at 5:25 AM