Everything is going well with our little guy! He shows more of his personality each day. He is such a sweetheart! He loves it when we sing to him. In fact, he loves music in general, whether it is coming from the computer, CD player, or our voices (thankfully he isn't judgmental when we sing off-key...). He also loves his swing and will sit there contentedly until it's time to eat, at which point he will start releasing rather urgent reminder grunts. 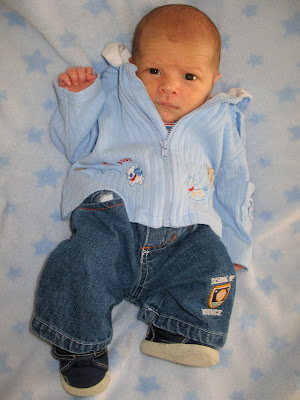 He is very mild-mannered, yet absolutely stubborn. One example of this happened the other day when I was trying to feed him more. He will only eat for about 15 minutes before he is positively insistent that he is done. Well, we wanted him to eat more, but his mouth was clamped tightly shut. He just stared pleasantly at us while we pried his lips open, only to find that his gums were pressed together as tightly as possible! He didn't fuss during the entire process, but there was no way we were going to get him to eat when he didn't want to. 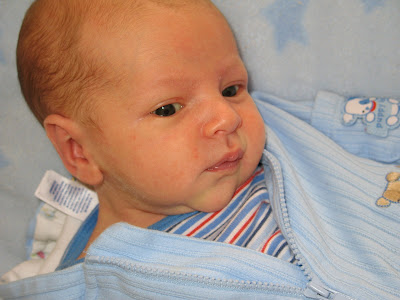 He also had his first Church experience this Sunday at just 2 weeks old! He did pretty well, but I had a momentary bout of panic when I found out after Church that one of the 6-year-olds in the class I teach was just recovering from the swine flu, and he had been the one child that I had the hardest time keeping away from him! For next week, I'll be bringing a bottle of hand sanitizer that I will require the whole class to put on. :) 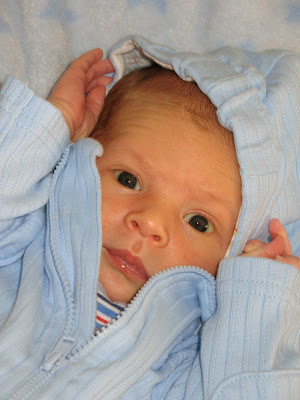 Sam and I just remain astonished that this little package of delight came from us. We feel so blessed to be his parents and thank Heavenly Father every day for that singular opportunity. 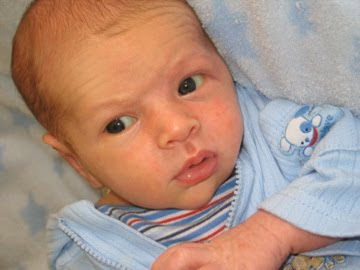