It all started when we pretty much ran out of food...we were long overdue for a grocery trip, and we didn't have much for dinner. No milk, no cereal, so our standard was no longer an option...no bread, so sandwiches were out of the question. No meat to speak of, so anything involving meat was a no go. Fruit and vegetables? Gone. Our fridge was pretty much empty except for a packet of pizza sauce, some cheese, and Sam's favorite--onions.
The best thing to do seemed to be to make a pizza! We had flour, yeast, etc. I began to work on the bread dough when we ran out of flour, too! I thought it would be fine, even though the dough was more like cookie dough than bread dough. However, apparently the yeast overreacted with it, and it rose like crazy! We decided it wouldn't hurt to try making the pizza anyway, so we dumped the dough into a pan with 2 inch sides, topped it with sauce, cheese, and onions, and plopped it in the oven.
20 minutes or so later, the timer went off. Sam opened the oven and started laughing. I went into the kitchen, where I too began giggling sheepishly. You see, our pizza kind of turned into...well... 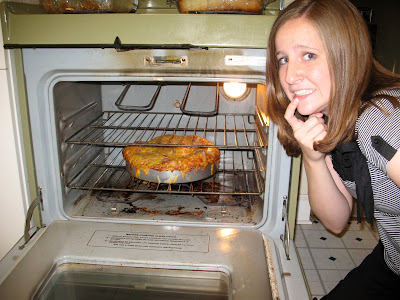 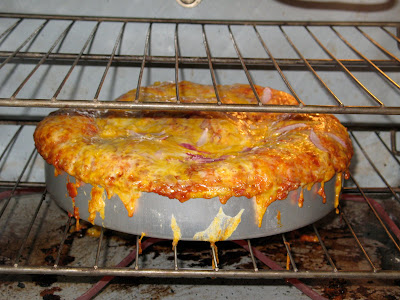 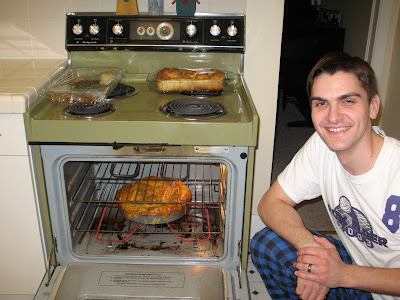 A GIANT MESS!!! Our poor oven is in desperate need of a cleaning now. We ate the pizza anyway, and it was surprisingly good! It actually filled Sam up! We even got to take massive slices of pizza to school and work the next day for lunch. Maybe we'll make volcanic pizza sometime again...but I think next time we'll put a cookie sheet underneath it to catch the stuff that boils over!
Posted by Kaitlyn at 2:10 PM