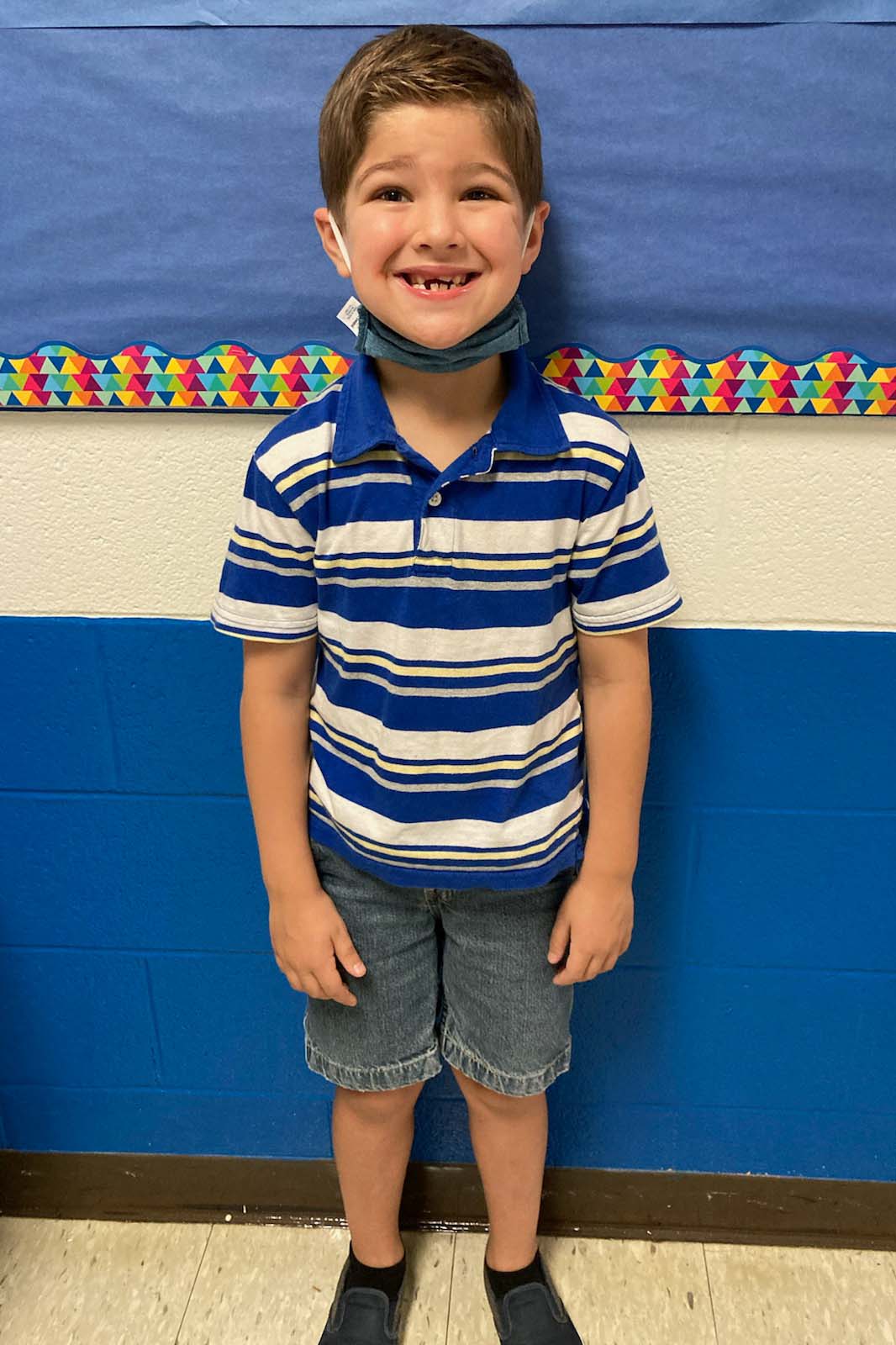 Sweet, happy, enthusiastic Lincoln turned 7 on the 5th!
The day before his birthday, he found out he was chosen for the character value of the month at school (Respect). My neighbor is the one in charge of taking the kids' pictures for the board at the school, so she texted me this picture. That ear-to-ear smile is SO Lincoln!

Since Sam was going to be in Louisiana for Lincoln's birthday, we celebrated the evening of the 3rd.
Lincoln randomly requested a green eggs & ham cake.
I thought and thought about how to do it and finally decided to keep the design simple, but to finally try using fondant.
It was my first time working with fondant and there are definitely a lot of imperfections. I learned some valuable things along the way. But overall, I think it turned out pretty cute and he was thrilled with it. Someone was borrowing my camera, so these phone pictures will have to do.
Underneath the marshmallow fondant (yuck) were two layers of dense chocolate cake with a hefty layer of cookie dough in between, all covered with chocolate frosting. So it was pretty easy to peel off the fondant and eat the tasty stuff underneath! Some of the kids liked the fondant, but it was way too sweet for me. 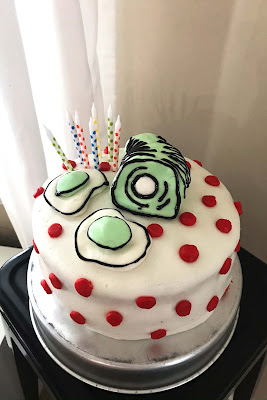 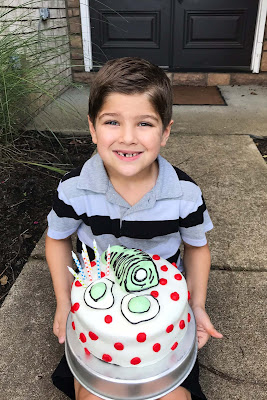 Once again, his requested birthday dinner was super easy to put together. Their simple requests have been so appreciated by this very pregnant mama!
He asked for hot dogs, bunny pasta, and chocolate protein shakes. I threw some watermelon on the table, too. 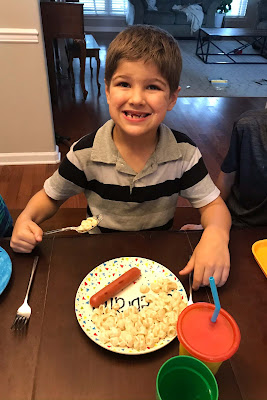 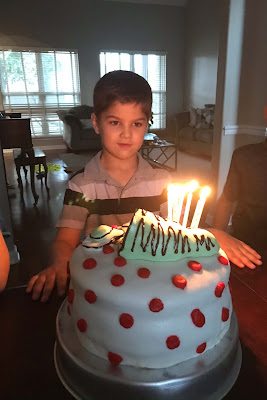 He elected to play the hot-cold game to find his presents rather than having them wrapped. He was SO, so, so happy to get this minky blanket! He has been so enamored with the one Sam got me for Mother's Day and is constantly begging to sleep with it or grabbing it from our bedroom to cuddle with. After he slept with it, he came downstairs declaring he'd had the best sleep ever! He is still sooo happy about his new blanket. 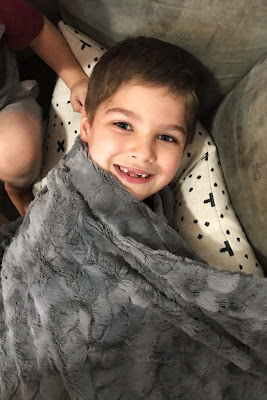 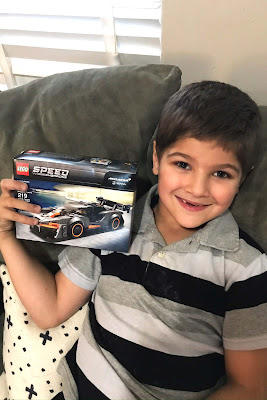 He was also SUPER happy about the BeyBlade Talmage and Wesley picked out for him. He threw his arms around both of them when he found it. It performs pretty well in competition with some of the better ones the boys have! 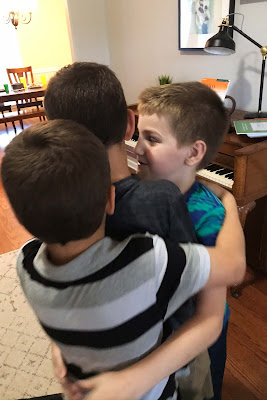 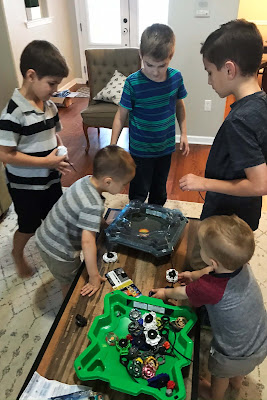 He picked a cool LED-lit kaleidoscope from the Grandma store, and he is excited to put together cars from the STEM car-making kit Grandma Sue gave him!

I still wanted to make his actual birthday special in spite of Sam's absence, so I made a number of plans for the day (which was a Saturday). We first headed to a nearby park. Playgrounds in our city are still blocked off with caution tape, but we brought scooters and the boys loved scootering around the long path that surrounds the park!
Next, we went to the library. Unfortunately, I was unaware that the library system has changed their hours so that they are now closed on Saturday (presumably due to COVID). That was a major disappointment for the boys.
But not to worry! I had another exciting plan in store. Breanne had given me a coupon for buy a dozen donuts, get a dozen free from Krispy Kreme and I had seen that they had just come out with an assortment of Fall flavors that looked so fun (like pumpkin cinnamon roll stuffed with cream cheese frosting). I thought it would be fun to pick up some donuts for a sweet birthday lunch and drop off the extra dozen with our neighbors as a way to celebrate Lincoln. BUT, Krispy Kreme had a buy a dozen, get another dozen for $1 deal going that day and apparently word about the deal raced around our town. When I pulled up, the drive-thru line wrapped all the way around the store, through the parking lot, and down the busiest street in town!
I asked the boys what they wanted to do, and they agreed to brave the line. So we waited in line for about an HOUR, crawling forward at a snail's pace. When we finally got up to order, we were told that they were out of almost every kind of donut due to the promotion. So we scraped together what we could, got our free dozen, and headed for home with 5 extremely hungry boys. We did drop donuts off with our neighbors on the way home, and the boys loved that.
Our last plan of the day was to have a friend and her little boy over for dinner that night (as her husband had also gone to Louisiana). She offered to put together and bring glow-in-the-dark bowling where glow sticks are put in water bottles. Unfortunately, the boys had been sick with colds through the week and Benson still had a residual runny nose, so they decided to play it safe and stay home.
I felt bad that my well-laid plans had fizzled out, but as the boys described their day to Sam when he called that night, it was clear that they didn't see it as a complete flop.
"We got to ride our scooters around the park!"
"We went and got donuts and piled them up to make another birthday cake for Lincoln!"
"The (neighbors) had a hummingbird stuck in their garage and they couldn't get it out!"
Etc. Etc.
Thankfully they usually tend to look on the bright side in the midst of disappointment.
All in all, Lincoln loved his birthday celebrations, and I loved seeing his giant grins repeated so many times through it all! 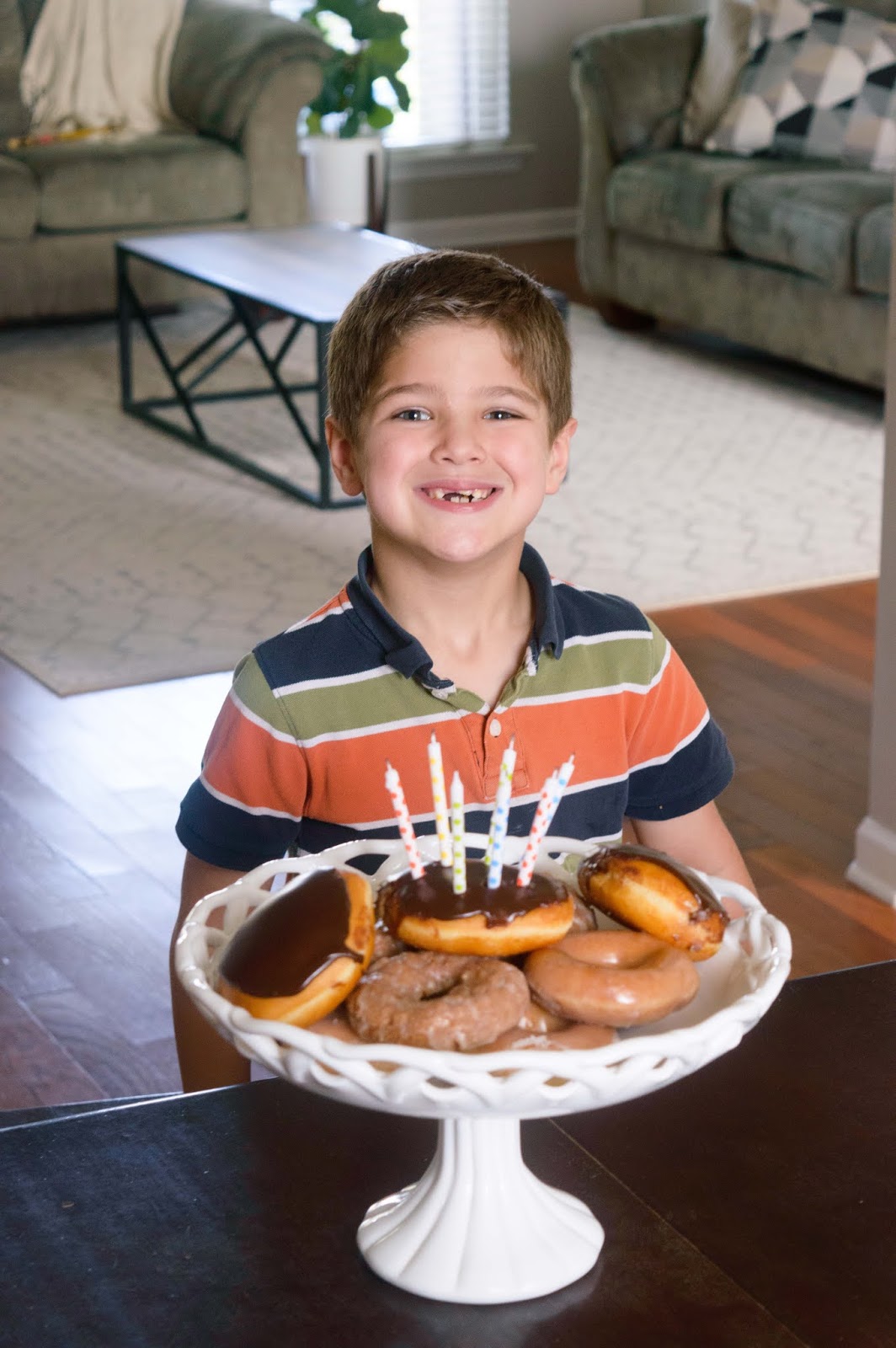