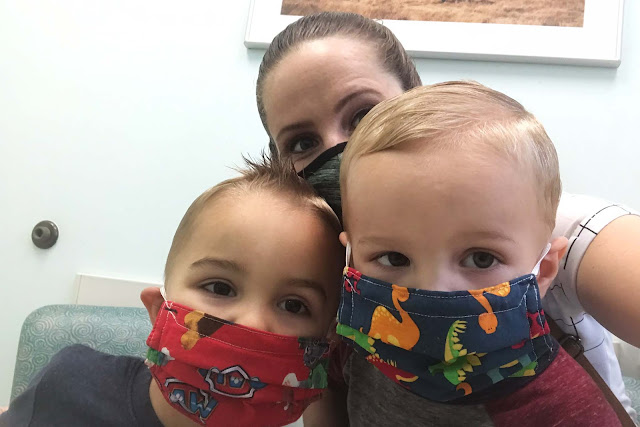 This morning Maxwell had his well-child visit. I assured him that he didn't need to get any shots today...I was pretty sure he wasn't due for any and, I thought, if I turned out to be wrong he could get them at one of our upcoming appointments we'll have for the other kids. Maxwell always takes his doctor's appointments SO seriously. He is completely silent and as still as a statue, doing exactly what they ask him. At the end of his appointment, the doctor said he was due for his last two immunizations. "Uh-oh..." I said. "I told him he didn't have to get any today. Let's see what he says." I turned to Maxwell and explained that I was wrong--that he needed two more shots before Kindergarten. I asked if it was okay if they did them today or if we needed to wait until another day and he soberly said it was okay to do it today. He was so brave about it--again, he lay as still as a statue and didn't make a peep through the two shots, but as soon as the nurse walked out of the room, he crumpled against me with the most pained expression on his face (still not crying) and said in a tiny voice, "That hurt a lot." I think it broke my heart more than crying would have! 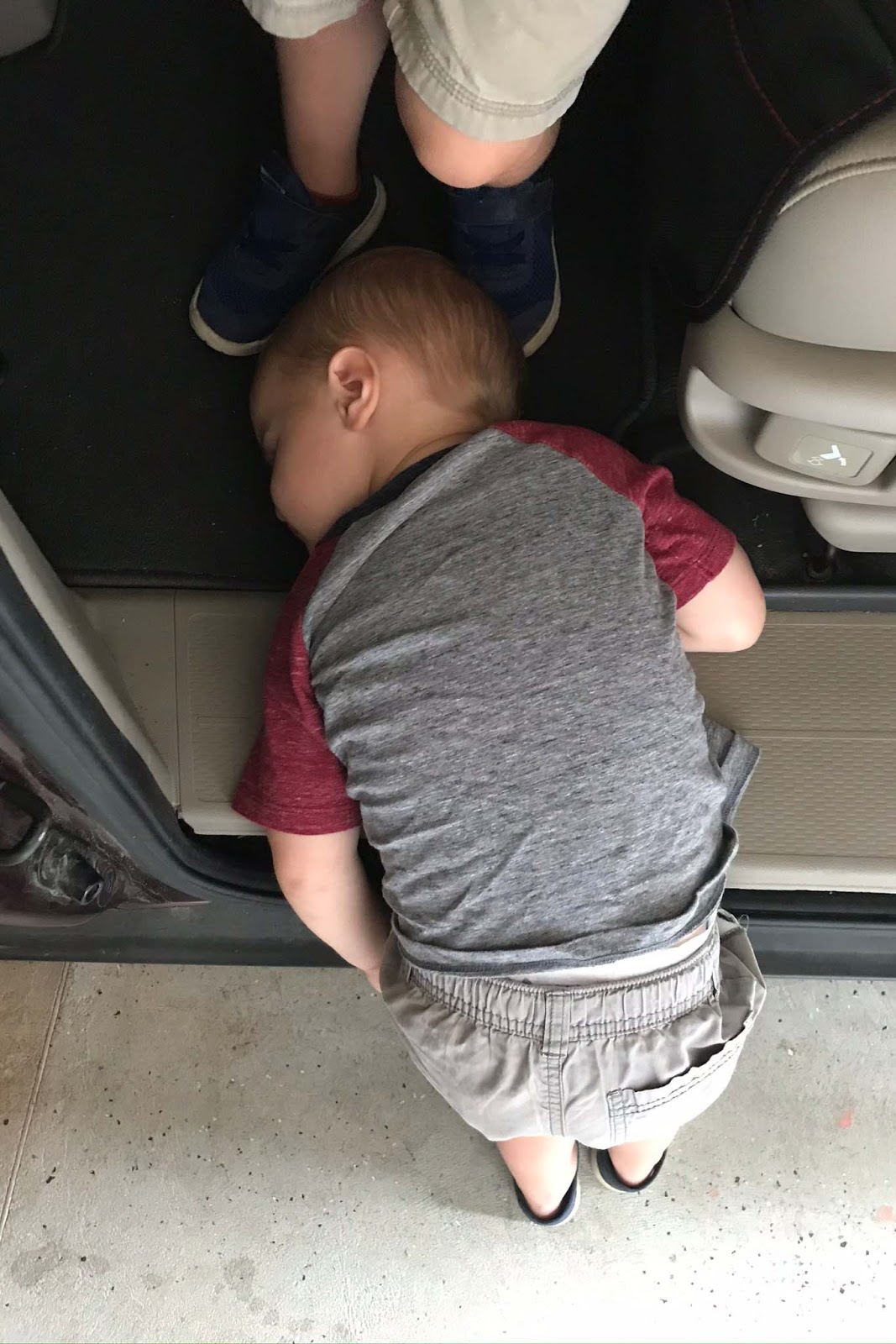 We picked up chocolate chip cookies from Chick-fil-a to reward his bravery. You'd think the drive-thru line wouldn't be too terrible at 10:30 am, but here in our town Chick-fil-a is always packed. As a result, Benson fell asleep in the car and when we got home I got him out of his carseat and set him down on the ground and he promptly doubled over, laying his head on the floor of the car, and went back to sleep in that odd position!

Last night we smelled the strong scent of something burning. We walked through the house, trying to pinpoint the smell. Was it the oven? The dryer? A light? We would smell it at varying strengths throughout the downstairs and couldn't find anything that seemed to be the culprit. We were reading scriptures with the boys up in their room when we heard a strange humming sound that lasted for about 30 seconds, a couple of minutes apart. Sam went into the attic space to investigate and discovered that our downstairs air conditioning was trying but failing to kick on. A bit of research online showed us that it was also the culprit of the burning smell. So we switched off the A/C last night. Our house is currently 80 degrees and it's almost 10:30 pm! Hopefully it will get fixed tomorrow. 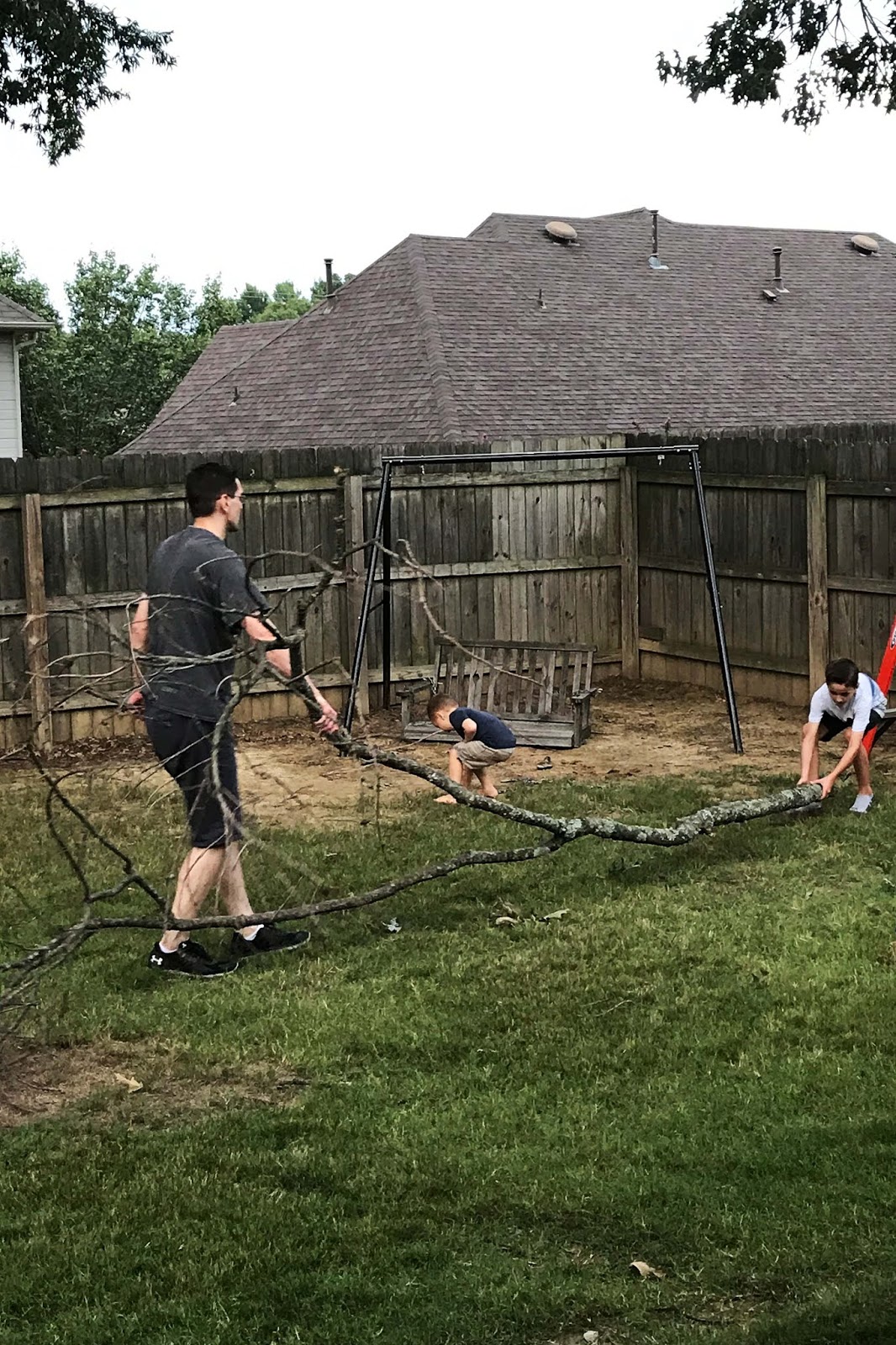 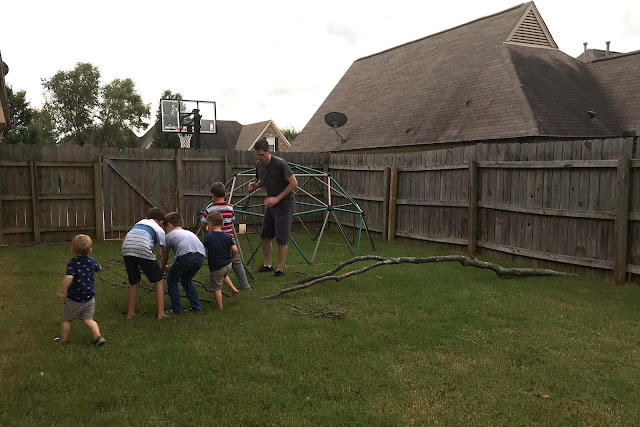 The aftermath of Hurricane Laura is projected to juuust miss Memphis tonight. But we're getting a pretty intense storm regardless. We were on tornado watch this evening and, although it never got very windy, after dinner Sam noticed a large branch that had broken off the tree above our backyard and was caught between two other branches such that it was about 12 or 13 feet up, waiting to fall. He sent all the boys inside and got out the ladder and did some maneuvering to get the branch down. All 5 boys were pressed up against the windows watching with the funniest commentary as they watched him work. "OOOHHH, that was a close one! Oh, he's going to use the chain--that's so resourceful! And brave! Wow, look at him!" I'm sure part of their fascination was due to the fact that we had just talked about Hurricane Laura at the dinner table and mentioned that a few people had died from trees falling on their homes. As soon as Sam safely got the branch down they burst out of the house, cheering at the top of their lungs and running over to investigate. He was pretty much the rockstar of the evening. Then they worked together to break/cut the branch apart and pile it into the garbage can.

I can tell my anemia has improved so much! I am no longer gasping for air all the time and I have a lot more energy. But I am still eating ice a LOT. The boys (especially Wesley, Maxwell, and Benson) love to eat ice, too, and Maxwell and Benson are always stealing handfuls of my ice. I've been referring to Maxwell as "my little ice burglar" today and he thinks it's so funny. In his evening prayers he said, "Thank thee that Mommy calls me her ice...ice...ice...what do you call me? Thank thee that Mommy calls me her ice burglar."

Wesley had his ENT appointment earlier this week to address his chronic coughing and sniffing. After x-rays of his sinuses, an examination, and a review of the history of appointments and treatments we've tried, the doctor suggested a 3-pronged medication approach for 30 days after which they will do a small CT scan and come up with an action plan to maintain clear sinuses (if the medication plan works) or to continue to try to get rid of the cough. I'm glad we're on the track to getting answers, finally--but he was NOT a fan of the thiiiick antibiotic he had to take tonight. We may have to see how he does with swallowing pills so he isn't gagging every night.

Talmage has been given family history homework over the past couple of days. He has been assigned to find out what countries his family came to America from and also make a family tree several generations back. Hooray for the fantastic tools on FamilySearch that make that job so easy! We printed out fan charts for him to show his teacher. It is such a treasure trove!

And then tonight I meant to be productive and even started folding the laundry, but after folding just a few things the heat started to get to me in our hot house, so instead I checked social media and ate Blue Bell cookies n' cream with Reeses magic shell on it and called it good. That's almost as productive, right? 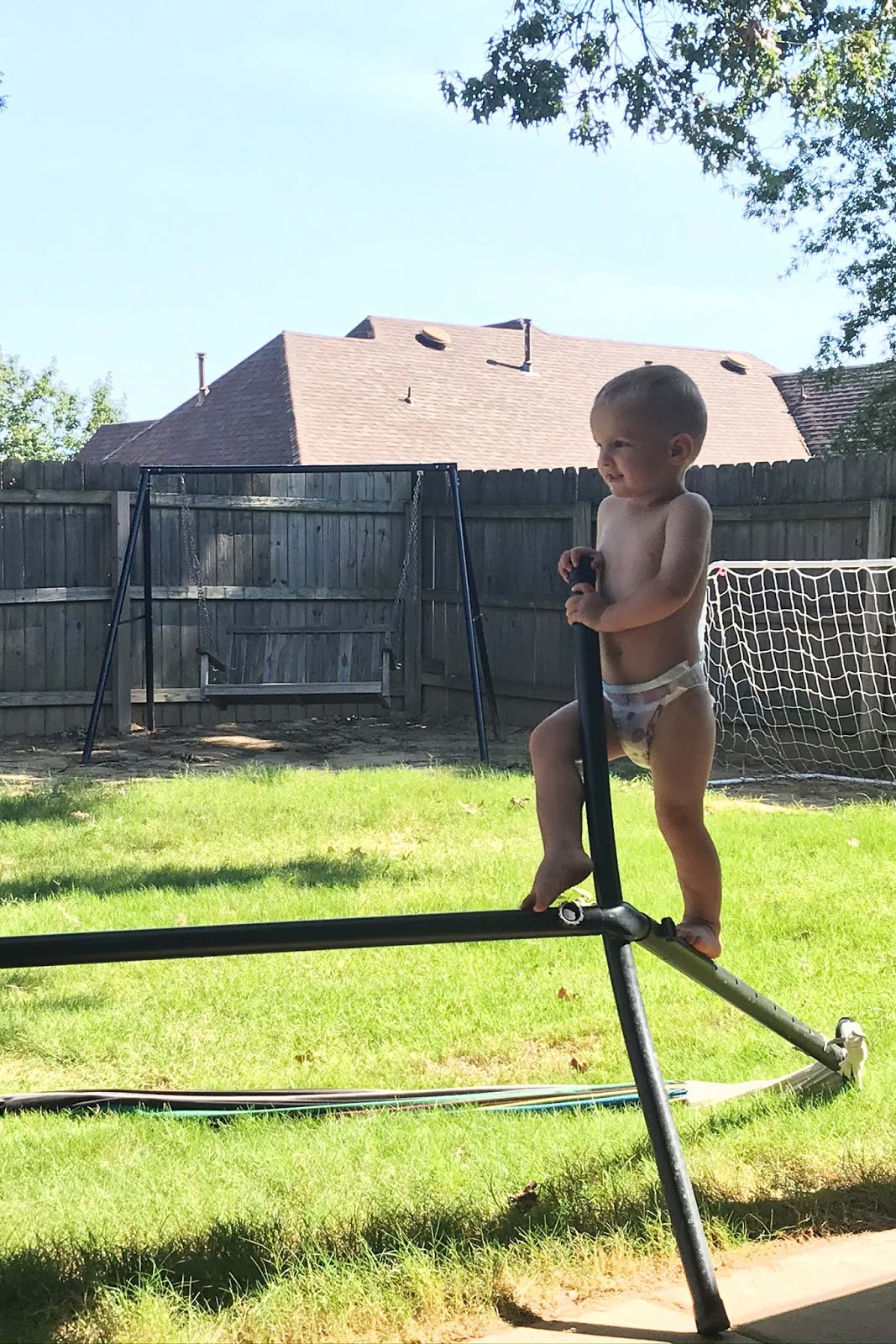 Also, I feel it noteworthy that Benson has taken to calling Maxwell "Bro" and "Dude" all the time while they are playing and also frequently shouts, "THAT WAS EPIC!!!" He is our little two-year-old teenager.
Posted by Kaitlyn at 9:19 PM