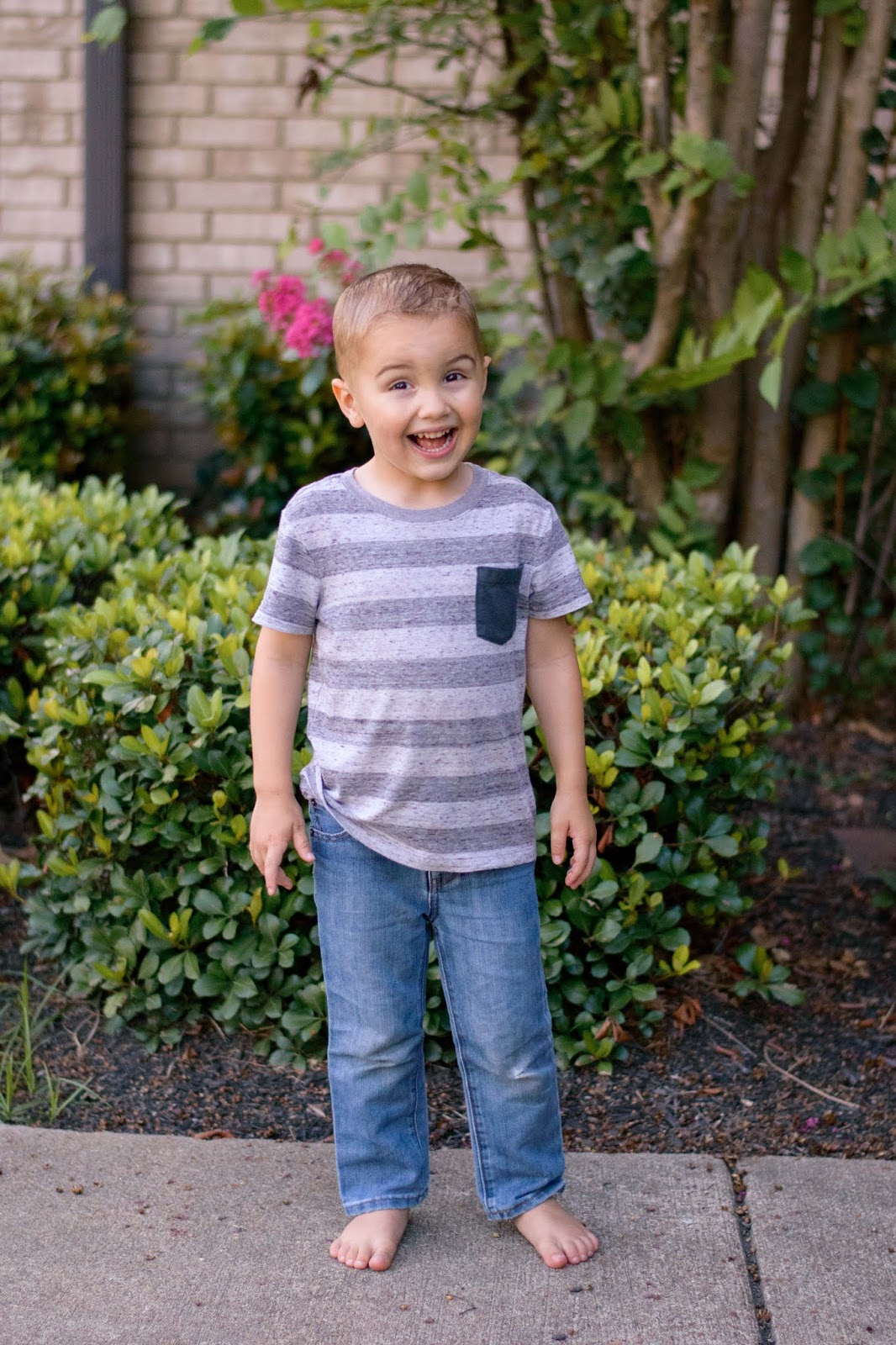 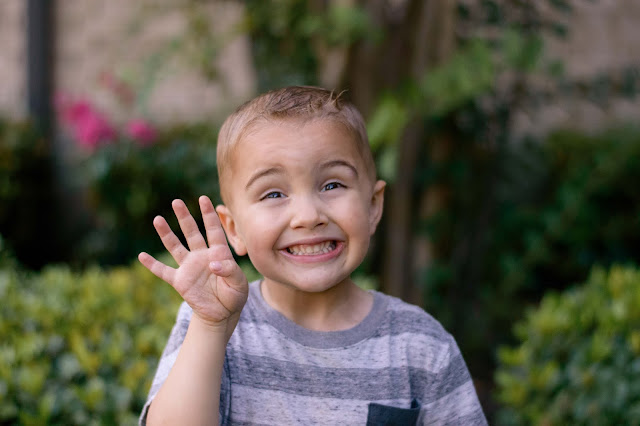 Early in the day, Aunt Breanne took him to Frost Bake Shop to choose birthday cookies.
He was super analytical and serious about it and didn't say a word as they surveyed the display case and Breanne commented on a number of delicious looking cookies.
At last, he very decisively announced, "I want a corn cookie."
In the midst of all the amazing cookies, there were a few sugar cookies made to look like vegetables. Once his mind was made up, there was no swaying him otherwise. That whole process is so Maxwell. 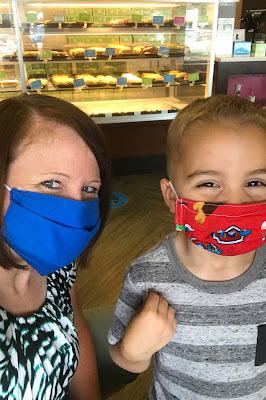 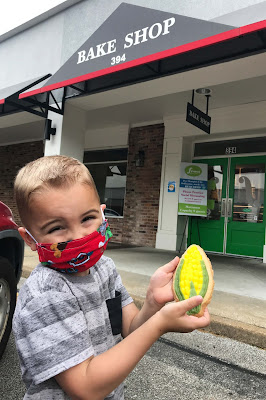 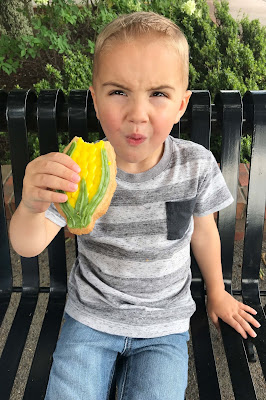 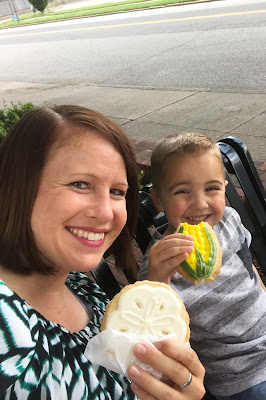 He requested a panda bear cake.
It ended up being 2 layers of chocolate cake with a layer of Oreo ice cream fudge sandwiched in between, the ears and nose shaped out of brownies, all covered in cream cheese frosting with Oreo crumbs for facial features.
I am always too critical of my cakes and see lots of imperfections when I look at them.
I want them to taste good, so I sacrifice on the ease of materials to work with in favor of more delicious components and then assembly is often frustrating.
After every birthday, I feel very ready to retire the tradition of having a cake that looks like something and just serve a yummy cake that looks like...well, like cake!
But then, without fail, the boys get sooo enthusiastic and excited about the cakes that I just can't bring myself to call it quits.

Maxwell was clearly thrilled about his panda bear cake in spite of the melting frosting, lopsided smile, and messy Oreo crumbs. 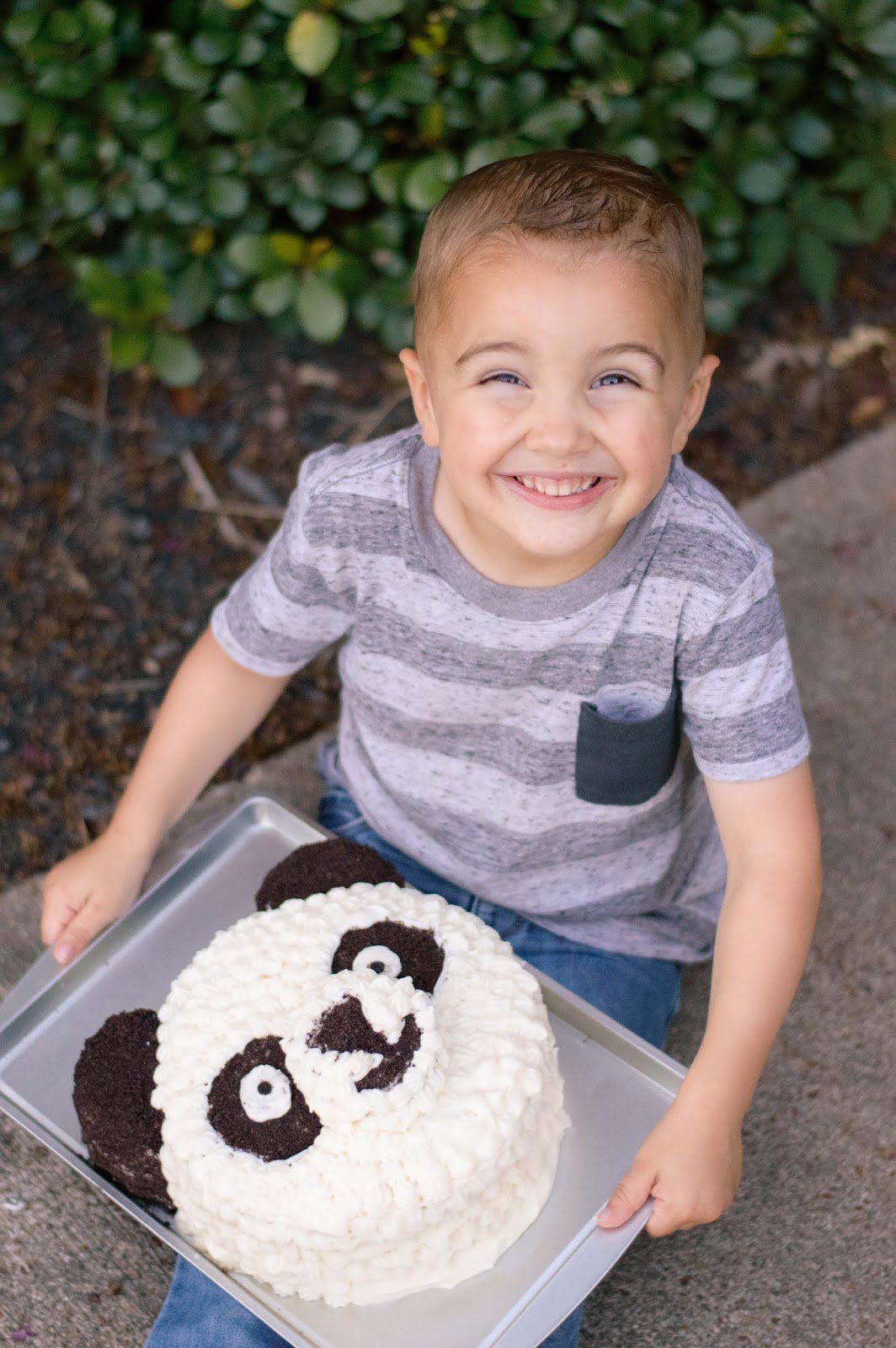 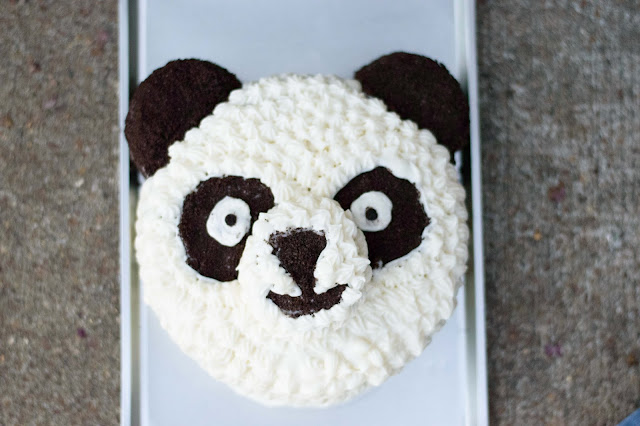 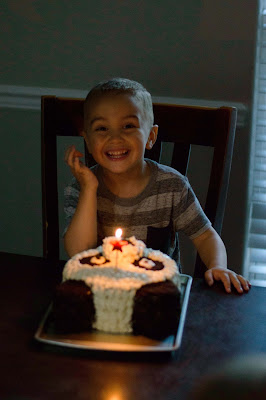 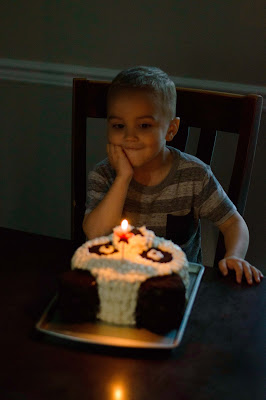 For his birthday dinner, he requested Dino-Buddies, bunny pasta, and goldfish.
Thankfully the kids have gone really easy on me with their meal requests lately!


After dinner, he opened presents! His main gift from Sam and I was a tent. He was so excited about it!
He also received a play-dough road construction set (with a gravel machine that cuts the play-dough into gravel!), a 4-foot long dinosaur puzzle, number-bots (from Grandma Sue), Legos and dolphin water guns (from Aunt Amanda and family), and a toy camera that really works (from Grammy and Grandpa)! 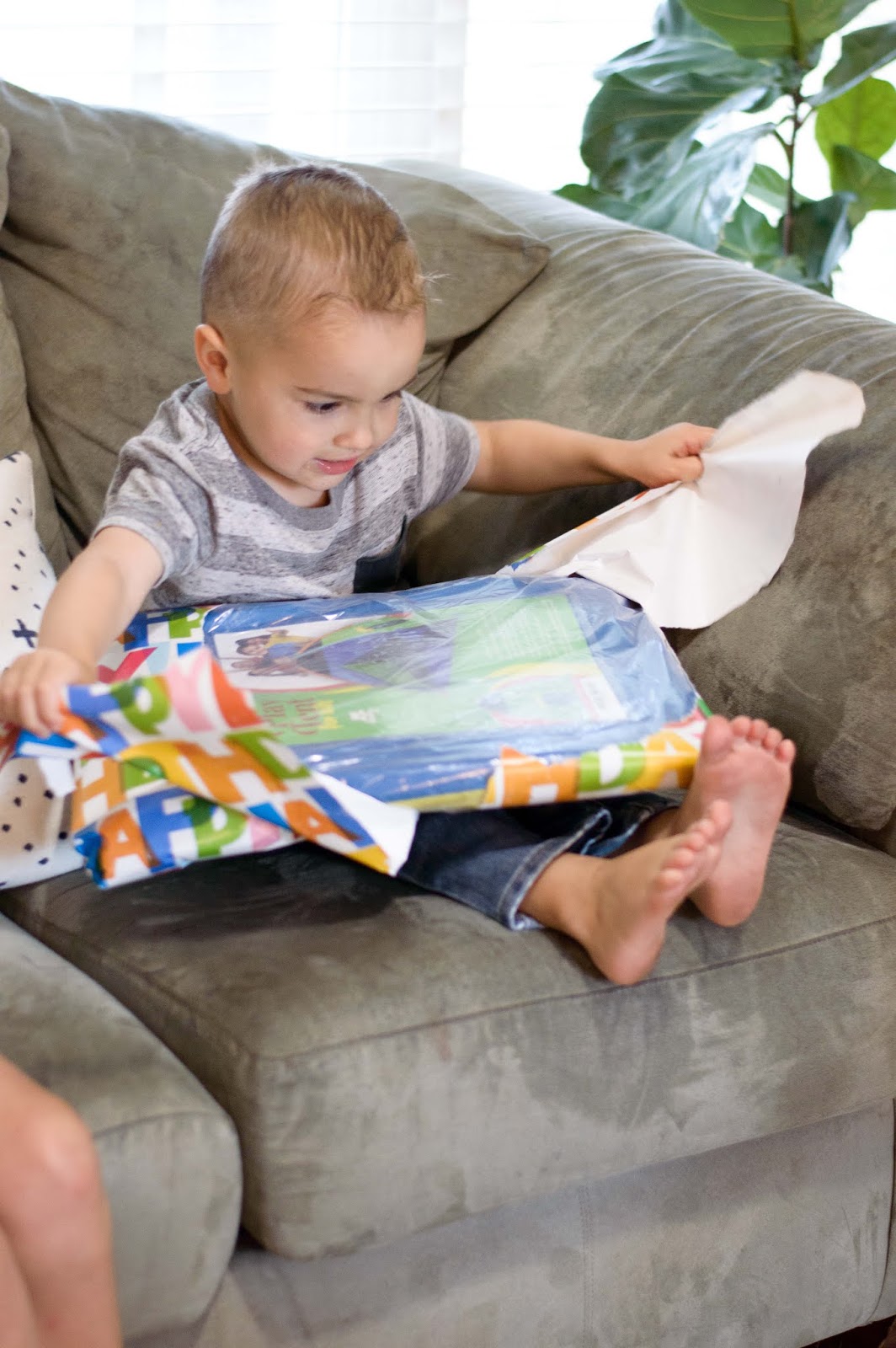 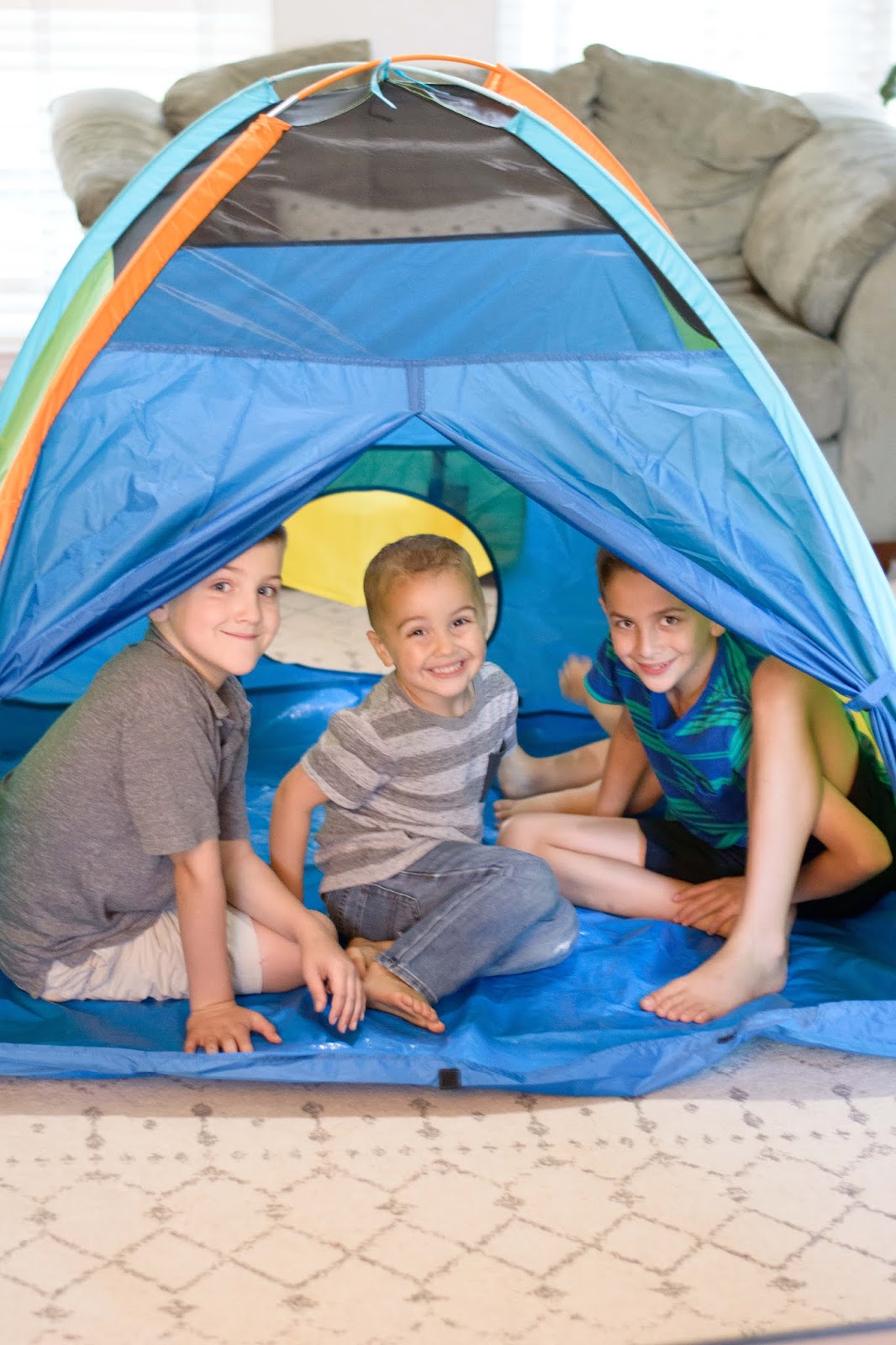 But my heart just melted over Talmage's gift to him.
About a year and a half ago, Sam's sister Amanda and her family came to visit us.
We went to the zoo, where Amanda bought each of the kids something at the gift shop.
She bought Maxwell a stuffed tiger, which he named "Stripes" and immediately became attached to.
Somehow, at the end of last year, in the midst of all our Christmas festivities and our trip to Utah, Stripes got lost. I assumed he would turn up eventually, as lost toys often do, but there we were, many months later, and Stripes was still nowhere to be found.
Talmage decided to use his own money to buy Maxwell a new Stripes. He remembered the brand and Talmage and I then looked online until we found the exact one he had gotten from the gift shop, which we then ordered for Maxwell.
He was SO happy to have Stripes again! 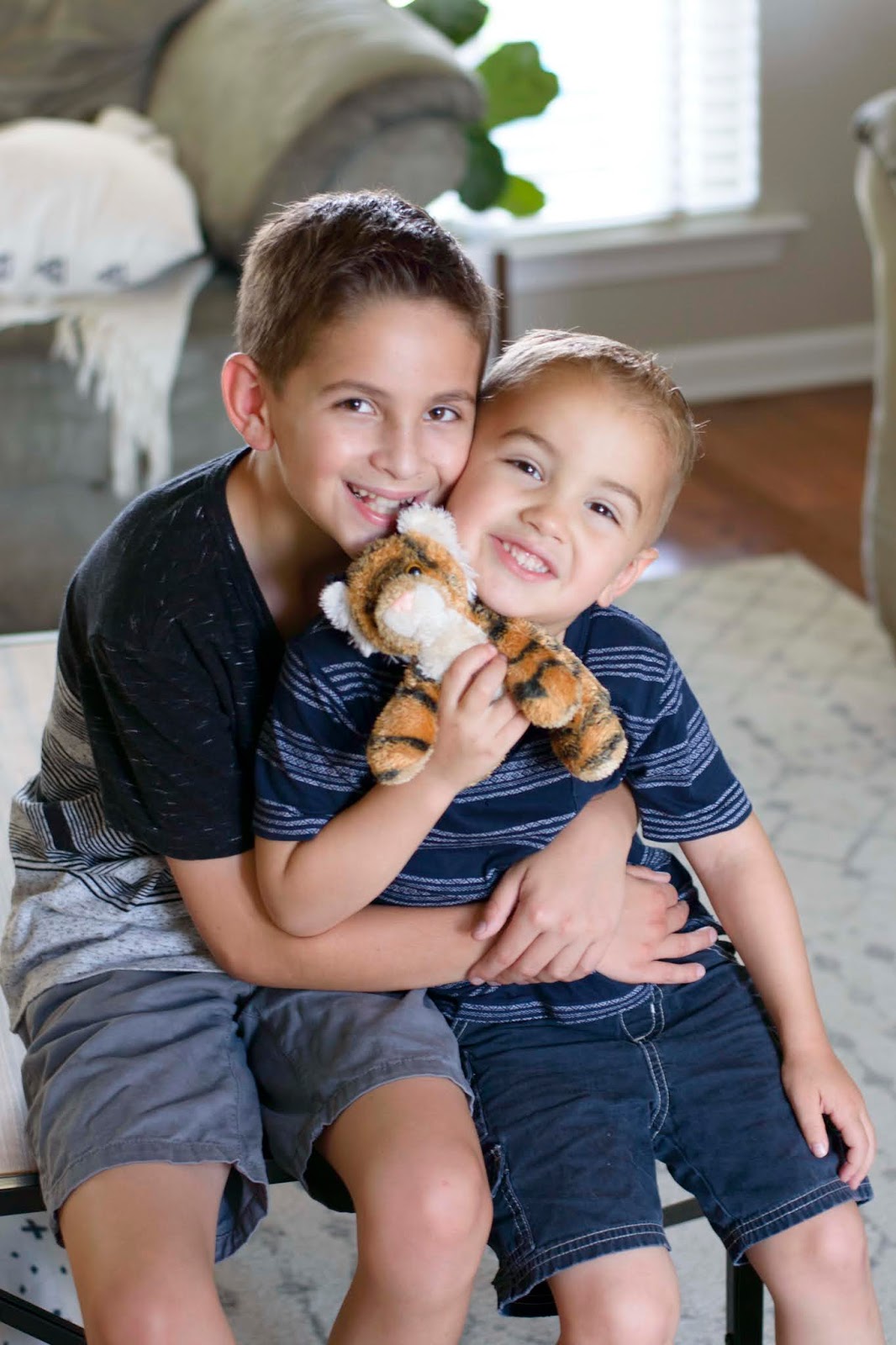