Our 11th anniversary came while we were at Bear Lake with my family.
We are almost always travelling on our anniversary,
so last year I determined that in the future we would no longer attempt to do a half-baked celebration, but rather just do something bigger to celebrate the anniversary of our first date which is conveniently the day after my birthday.
So we didn't do much to take note of the day, aside from having my sister snap a few pictures of us (Thanks, Breanne!).
The Bear Lake backdrop was just so beautiful and Sam was so kind to humor me with a little photo shoot. 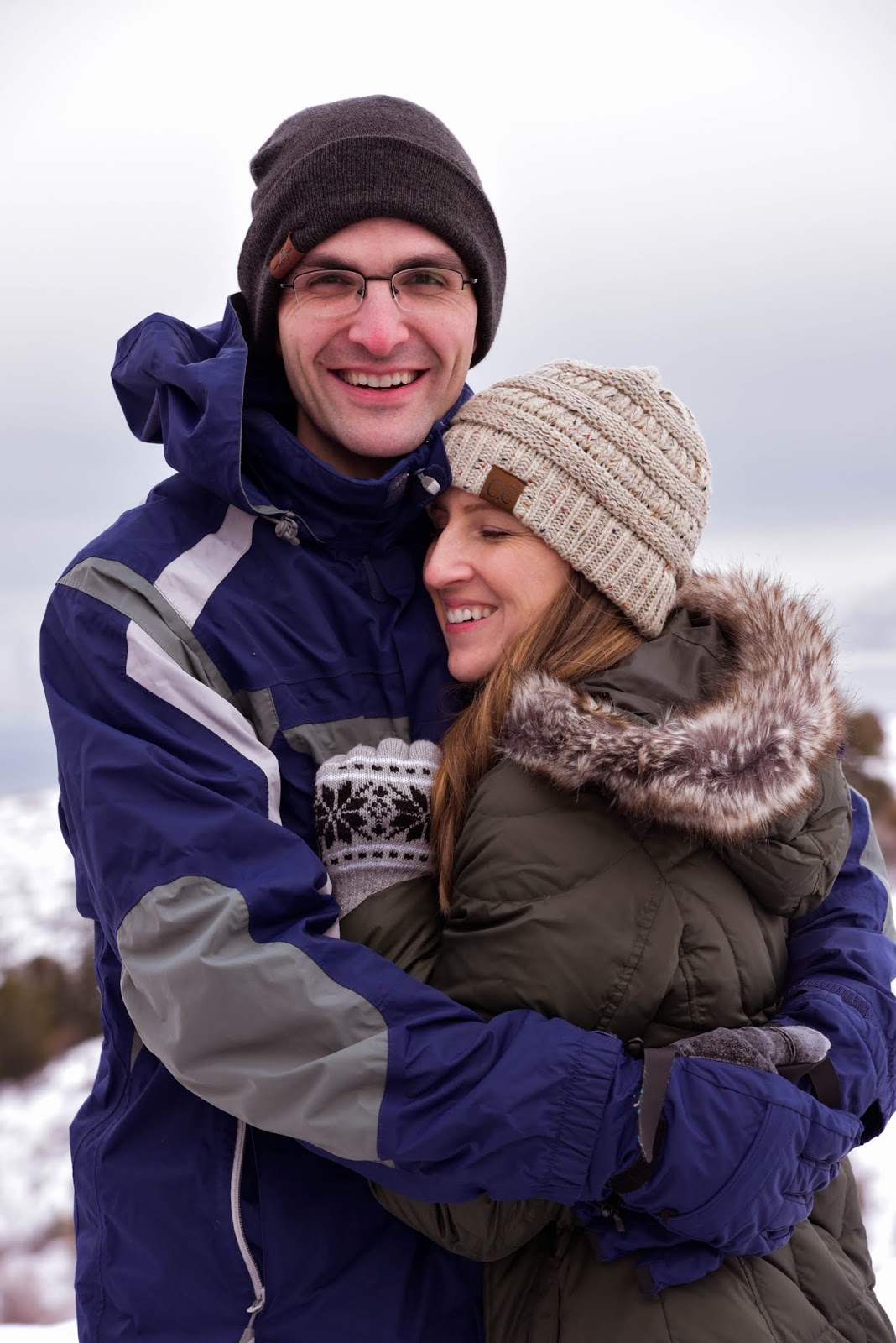 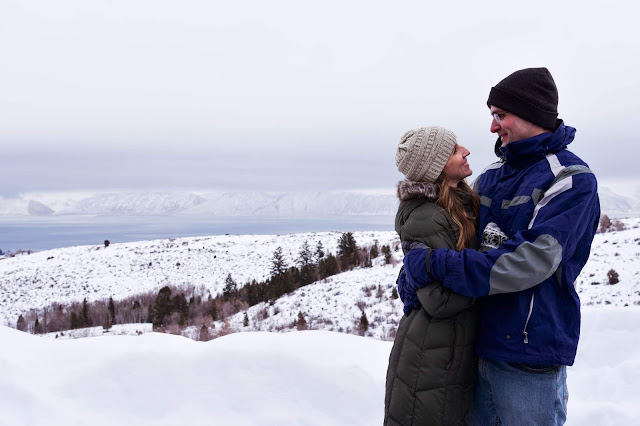 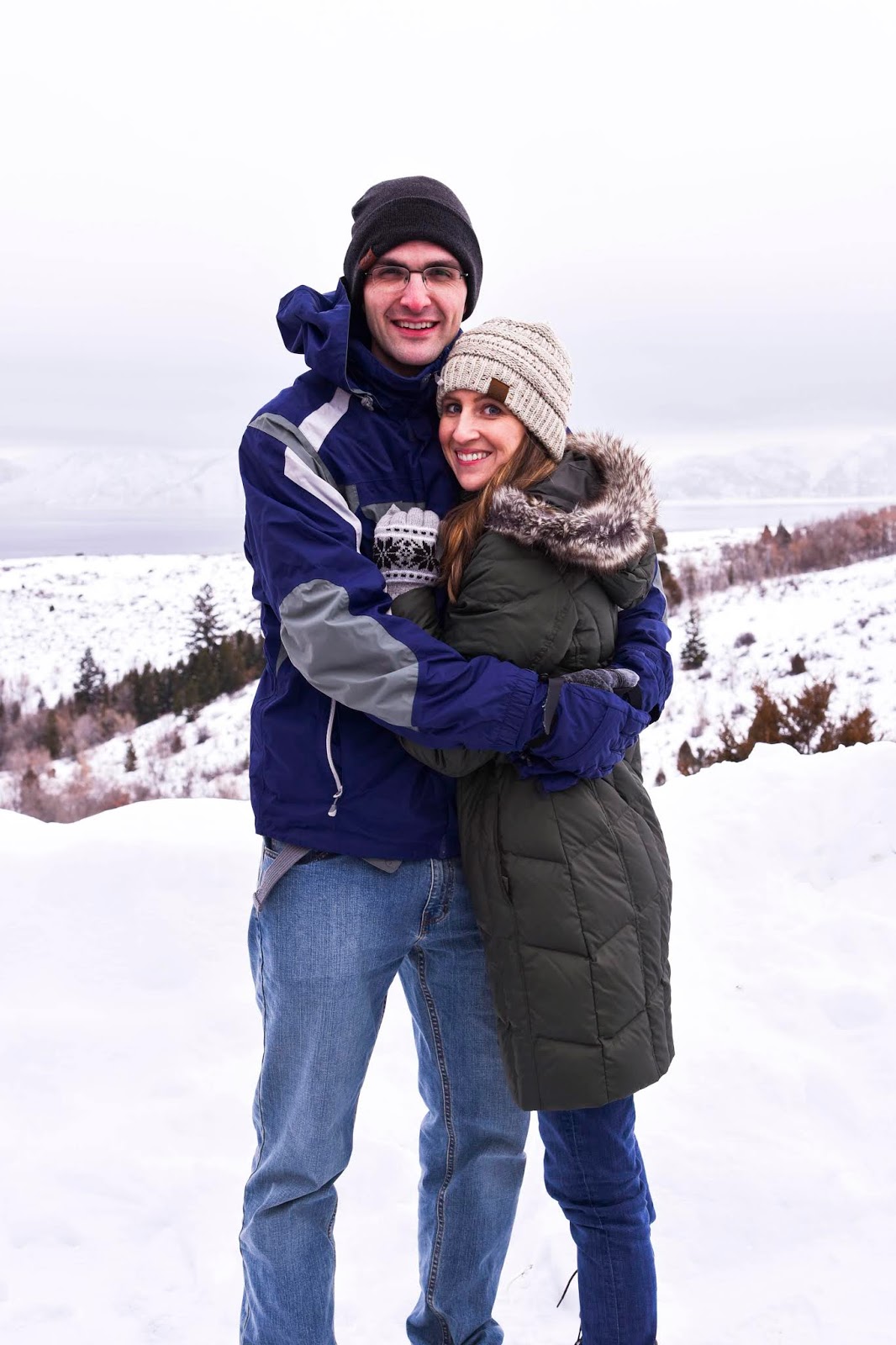 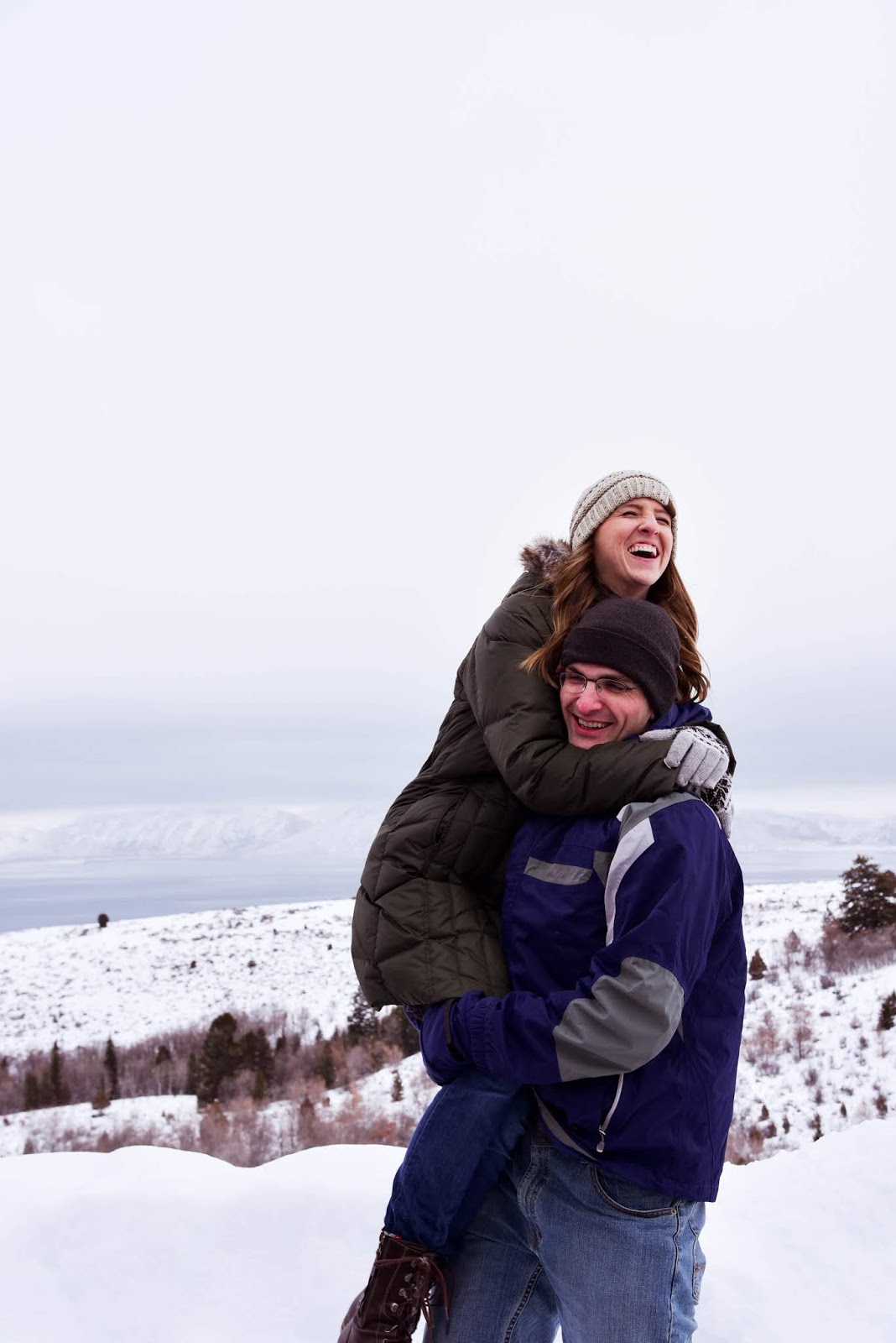 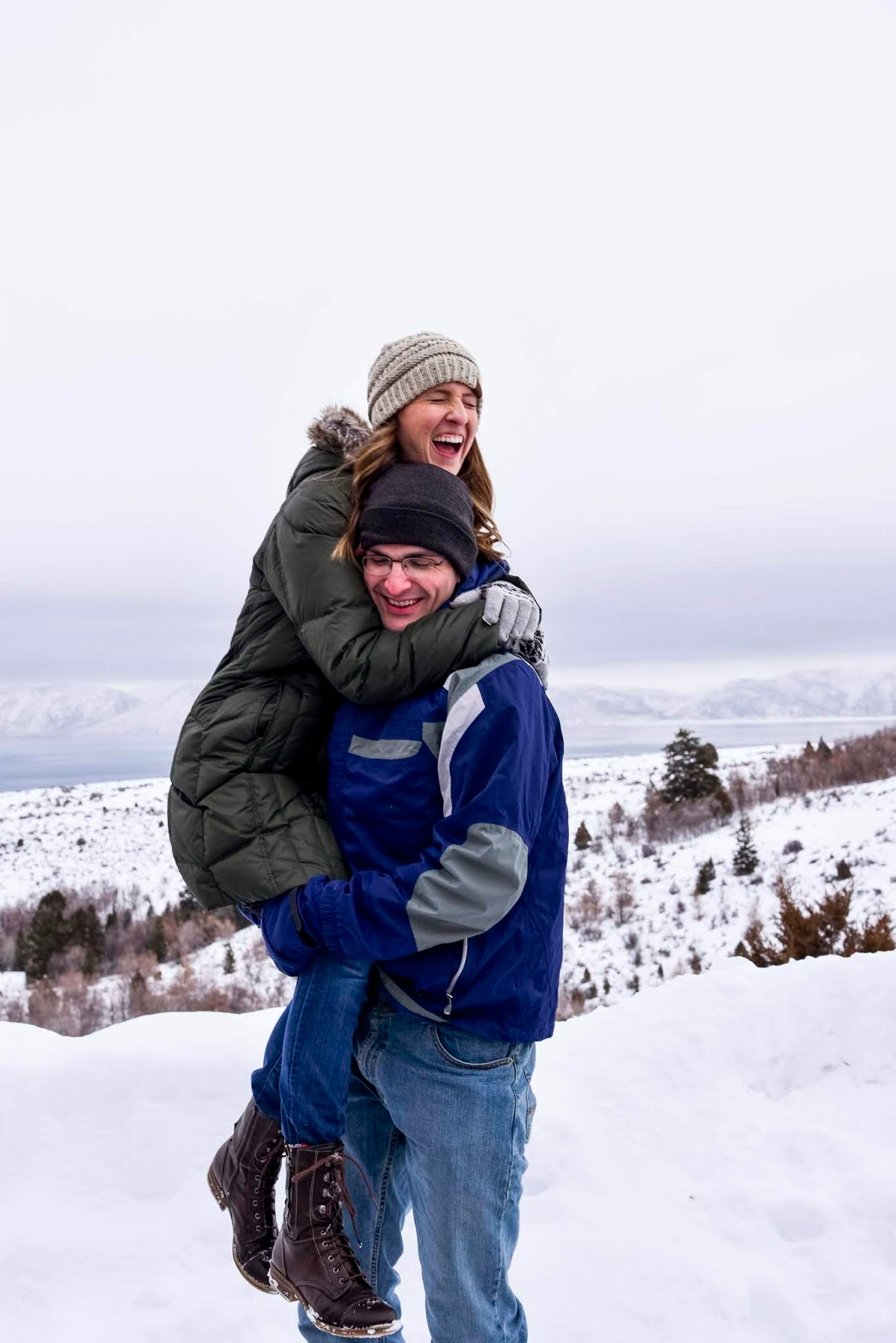 These two pictures came about because I tried to get Sam to pose with me in a particular way and I did not communicate what I had in mind very well. He picked me up as if I was a toddler and I was dying of laughter! Ironically, I like these pictures even better than the ones I initially planned on. 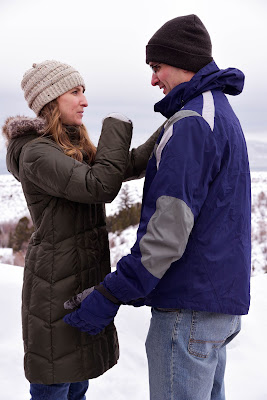 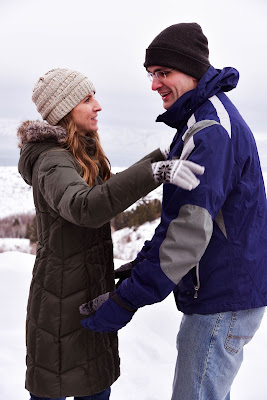 Here I'm trying to explain what he should do... 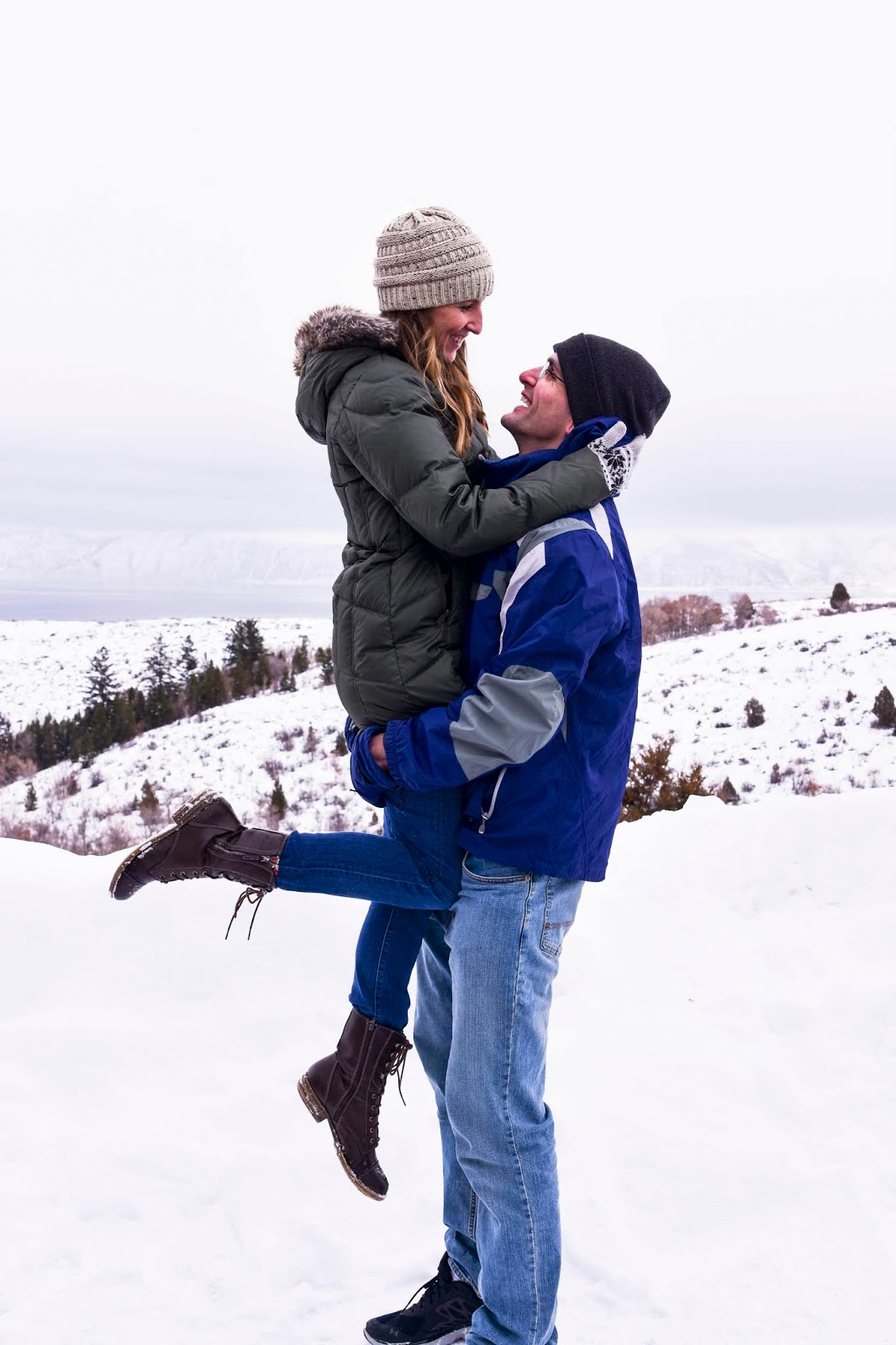 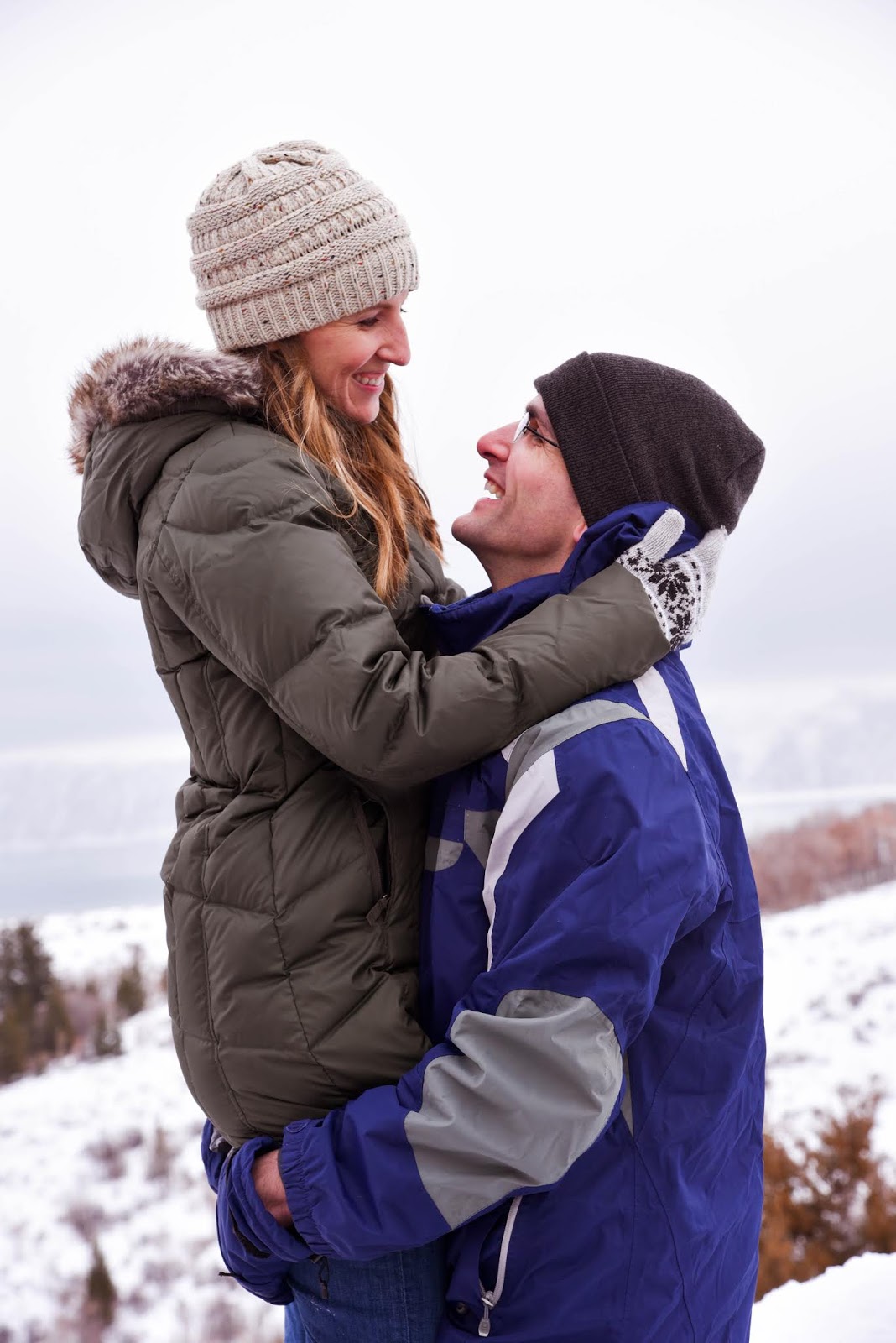 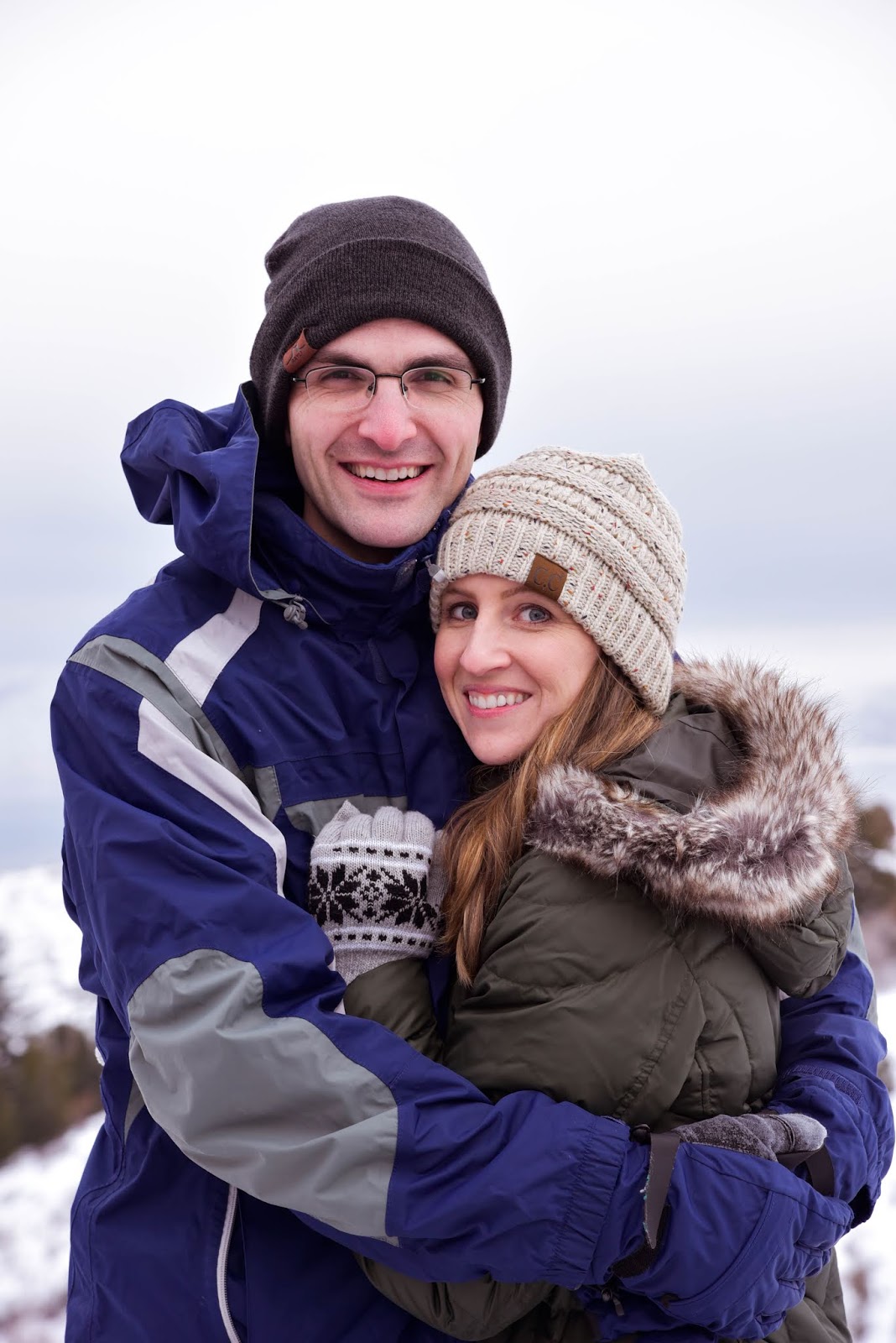 Sometime in mid-December,
I had a video chat with some of my old college roommates.
As they were trying to arrange a roommate reunion, I said, "I love you guys but...I haven't ever even had a night away with Sam before!"
All of them (with the best intentions) began chiming in, telling me why I needed to go on a getaway and how it would be so amazing and my marriage is worth the investment.
I came away feeling really picked on and frustrated.

Of course I believe my marriage is worth investment--I am one of the biggest advocates of spending time with your spouse you'll find!
But in our years of grad school our budget was so tight we had a $5 limit for gifts, so we CERTAINLY didn't have a few hundred (or thousand) extra dollars to get away for a while...not to mention the fact that our kids were coming rapidly and we lived many states away from any family.
Then we moved close to family for Sam's postdoc, but, again, were on an incredibly tight budget (I once read an article that called postdocs America's smartest, poorest people, and that feels pretty accurate).
By the time we had money for a getaway, we once again lived many states away from family and had 5 young boys, including a newborn.

I was still grumpy the following morning and I called my mom, knowing that if anyone understood my frustrations, she did.
My dad's grad school years lasted until my oldest brother was 11 and she, too, had 5 young children at that point and didn't have a "getaway" of her own until her 25th wedding anniversary!
I called her and immediately there was something going on in the background.
"Sorry," she said. "I have Jocilyn's (my sister's) kids while she and Ryan are away on a getaway for their anniversary."
OF COURSE that would be the case!
(Don't worry, Jocilyn, I'm happy for you--truly, I am!!)

That night Sam and I headed out on a date, and I started explaining the irony of the situation to him.
"You poor thing!" he started to say sympathetically.
"Noooo!" I replied. "Don't pity me! Tell me all the reasons why we don't need a getaway!"

Sam is the smoothest, so it only took a few seconds for him to switch gears entirely.
He started telling me about an article that he'd read about how marathon runners don't get as many health benefits from running as people who consistently run shorter distances because it is so hard on their bodies.
"We're doing the shorter distance runs!" he said. "We put time into nurturing our marriage every day!"

And that was all it took for all most of my self-pity to vanish.
Because he's so right.
And he's SO. GOOD. at the everyday.
The second he gets home, he is working tirelessly to ease my burdens and strengthen our family.
He dotes on me constantly and heaps lavish praise on me non-stop.
He writes me the sweetest notes and poems, makes time for a date weekly, and insists that our boys treat me with the utmost respect and express gratitude for my efforts.
And most importantly, he is trying his hardest to emulate the Savior's example and that touches EVERY ASPECT of our marriage.

That's not to say I don't still have my sights set on an overnight getaway sometime very soon--
I'm determined to make it happen in the very near future!
BUT, I will forever appreciate the fact that the small, simple things we do on a daily basis to strengthen our marriage are the things that make the biggest impact.
And those are things we can do regardless of where we live, the number of children we have, the stage of life we're in, or the dollars that pad our bank account.

Happy 11 years, dearest.
My heart is forever yours.
Posted by Kaitlyn at 1:01 PM