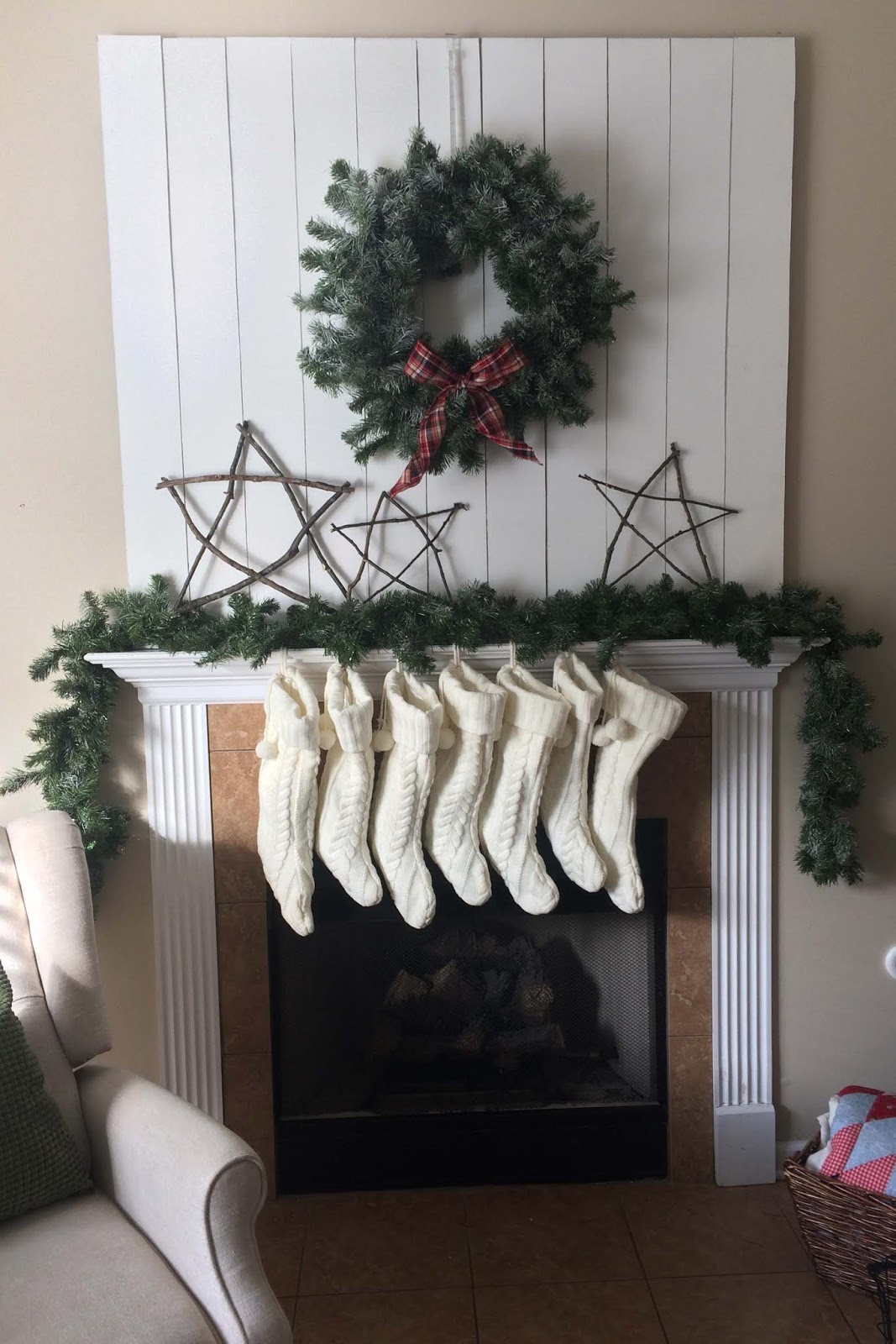 The month of December was filled with happy times for our family.
I love holiday traditions and celebrations so much!
So as not to still be writing about Christmas in June,
I'll just dump all of these pictures here together.

St. Jude has several nights during Zoo Lights when the entire zoo is reserved for employees and their families!
We missed the first two years we were here for various reasons,
so this year was the first time we went and it was AMAZING!

There was fake snow blowing and festive music playing right as we walked in and it put us all in such a happy place.
They had free ice skating, and it was the first time for all the boys.
They did a pretty good job and made quick progress! 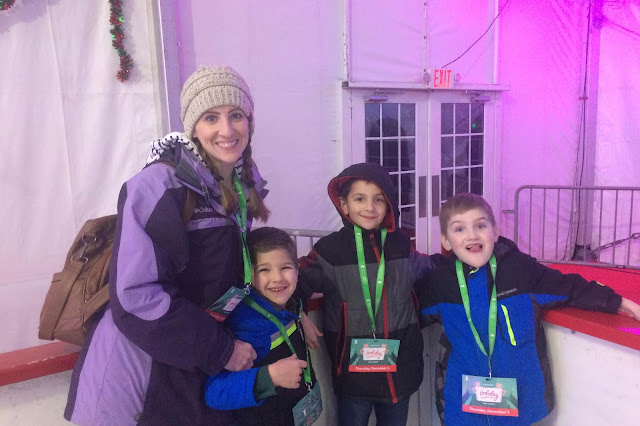 They also had unlimited carousel rides...I think we rode it about 8 times in a row. 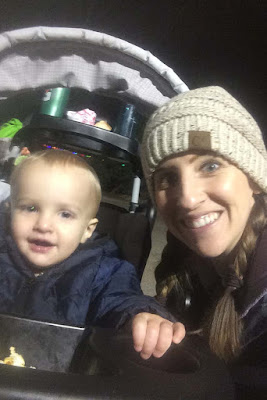 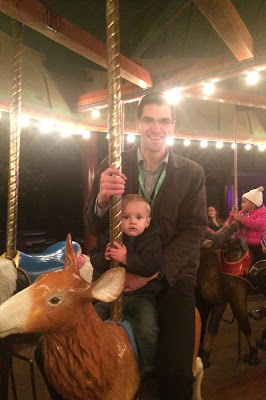 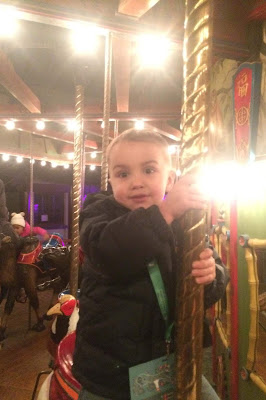 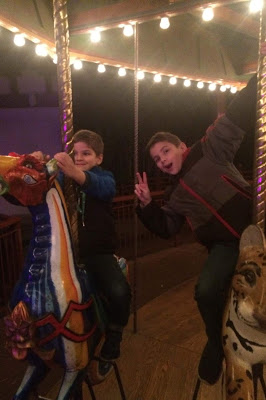 And there was free food EVERYWHERE.
Right when we walked in there were stations set up with a kids' snack mix, popcorn bags, and hot chocolate,
and there were also nice big boxed dinners available in a couple of different locations. We enjoyed our sandwiches, chips, pasta salad, fruit, and cookies as big as our faces!
Later in the evening, we stopped at the s'more making station which was SO cute and fun! 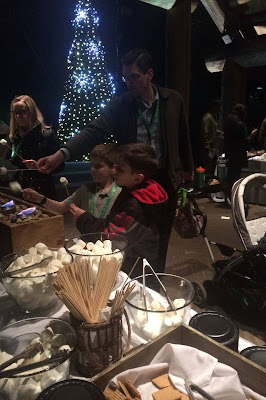 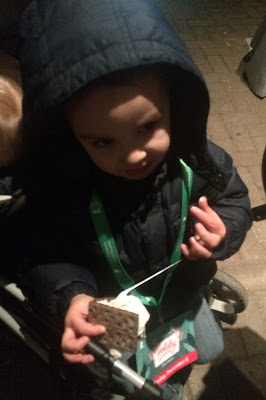 We also watched a magic show, which the boys loved but I really hated as usual.
It drives me CRAZY to not know how those tricks work! I mean, WHERE did the dog go?? I was watching so closely for any flicker or distraction! I hate thinking I am so easily deceived.

We hosted our 2nd annual Christmas music party and it was a hit! It's basically a potluck of Christmas music performances. We had about 30 people in the house and I wasn't sure how it would work to do performances with a crowd like that, but it all went really well! We had a spread of delicious appetizers and desserts and the kids had such a good time playing with so many friends.
(And here is the tree I got off my neighbor's curb--I actually put it out with the trash this week because it really was falling apart, but it was beautiful for one season!) 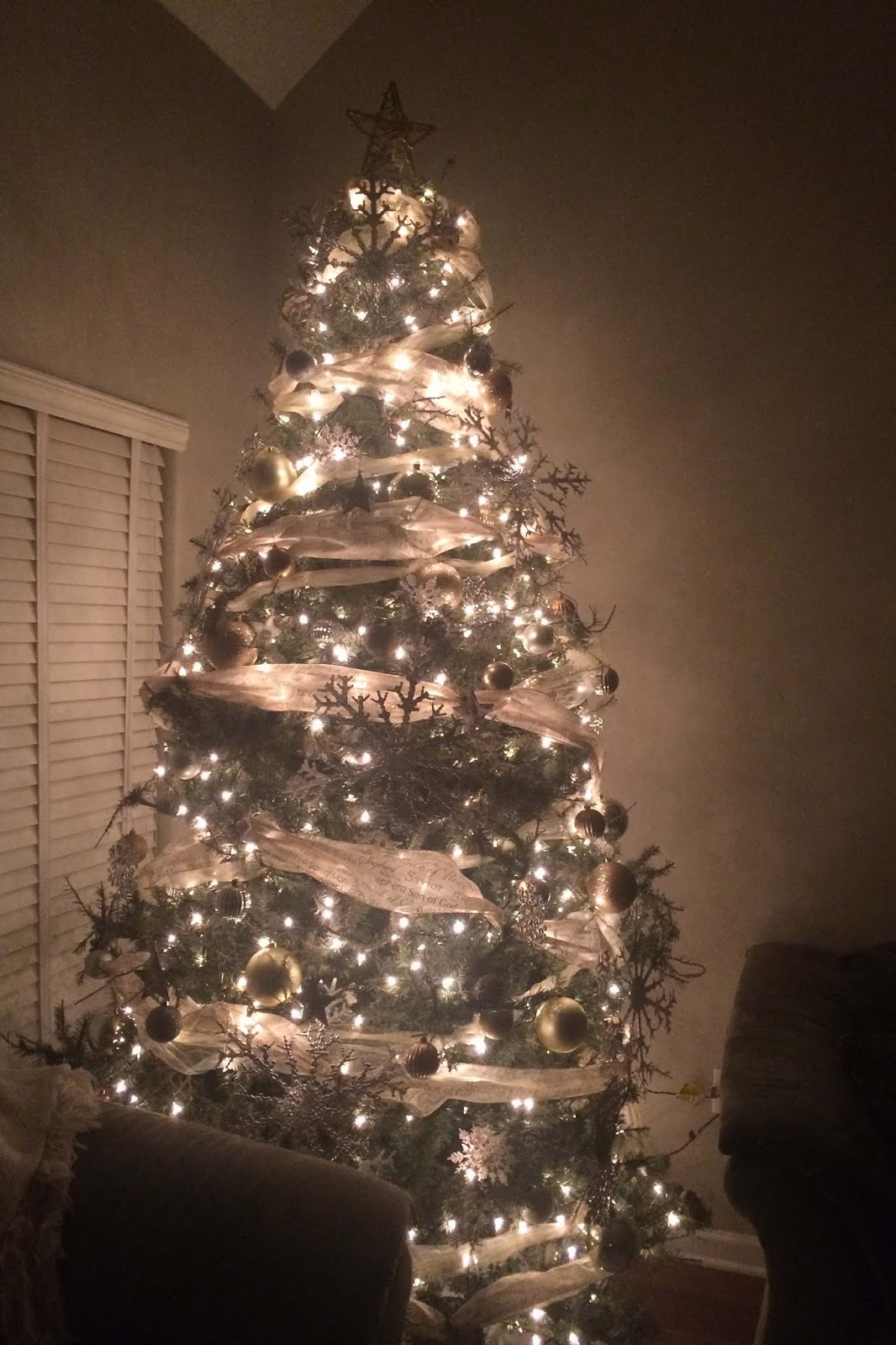 Sam was out of town at a conference for a few days so I braved taking the boys to the city Christmas parade on my own. I didn't think it would be a big deal, as I planned to park at the library, throw a blanket on the curb to stake out our spot, go inside to check out books, and then spend the remainder of the wait time reading together.
BUT when we got to the library, it was closed! (I guess for the parade?)
I had brought essentially nothing to occupy the boys and we had an hour and a half to wait on the busiest street in town...definitely not my ideal situation.
But in the end it all worked out with minimal complaints from the boys as we drew pictures on each other's backs, played "find the sock," threw rocks into the little stream behind us, and looked at the few books I scrounged up from the car.
Once the parade started, everyone was so happy. It was so fun for the boys to see several of their friends and teachers in the parade! 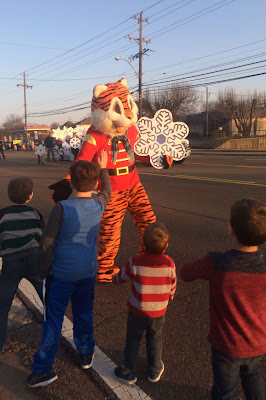 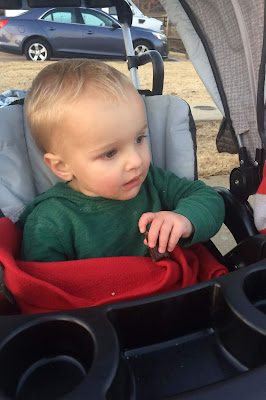 Their school float was Elvis themed. The PTO put it together and it was pretty impressive! 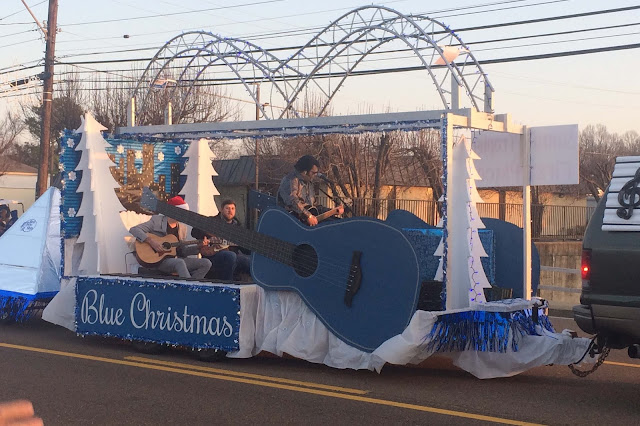 Maxwell was so excited about all the candy he got. He didn't want me to set any of it aside for him, so he just clutched more and more until his hands were totally full. 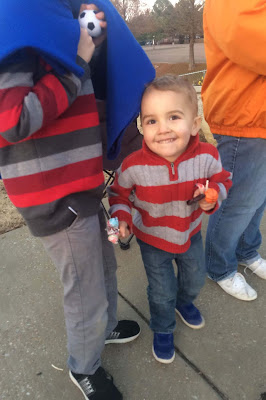 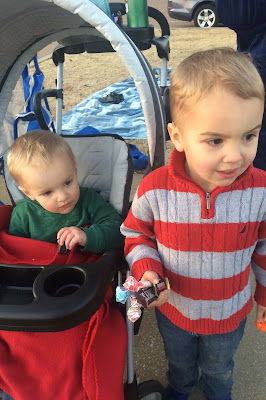 Someone was handing out sidewalk chalk, so Lincoln and Maxwell sat down right then and started coloring with it as the parade continued. 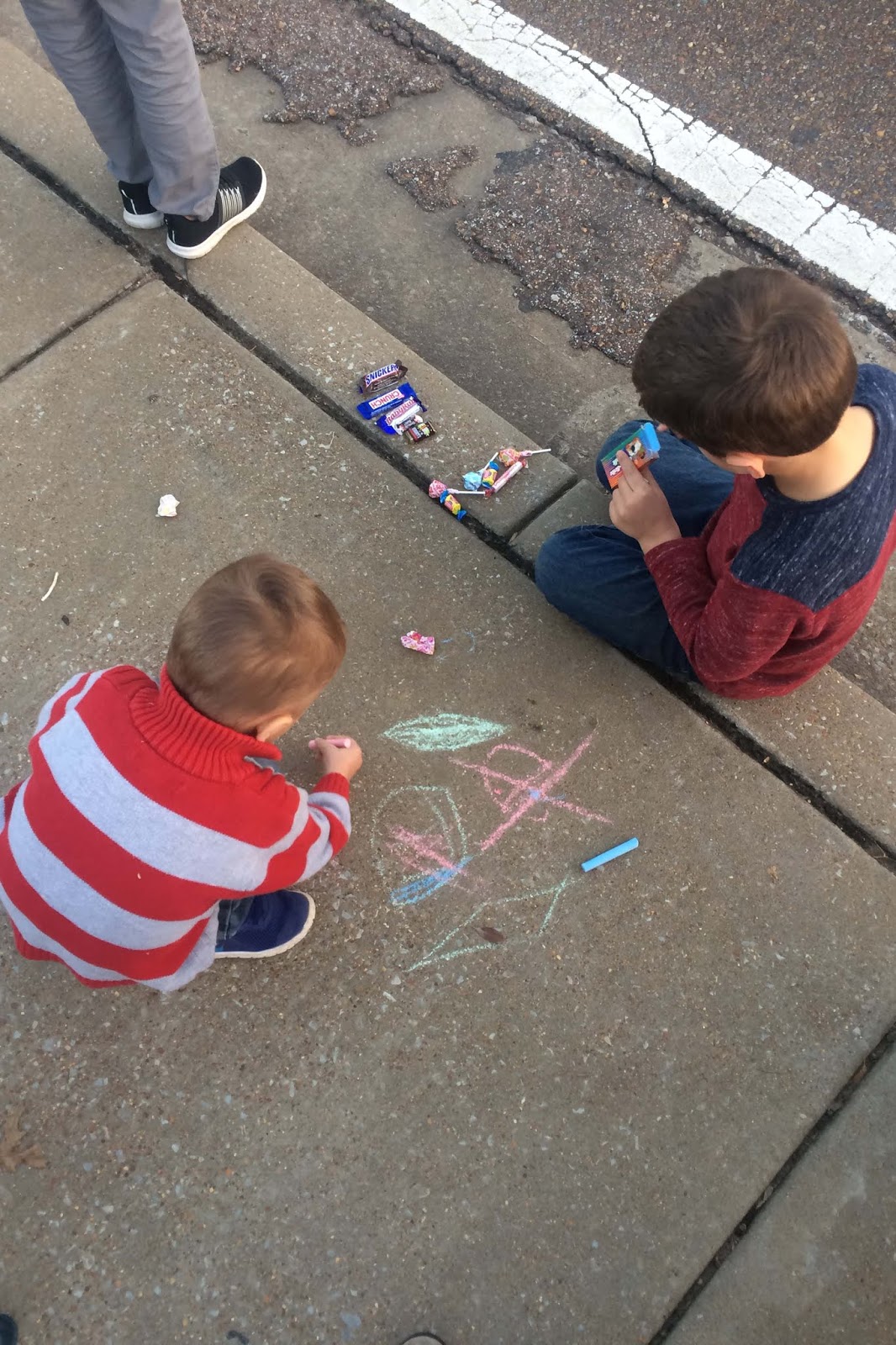 This hot air balloon company had such a cool float that would shoot fire up into the air every few seconds! 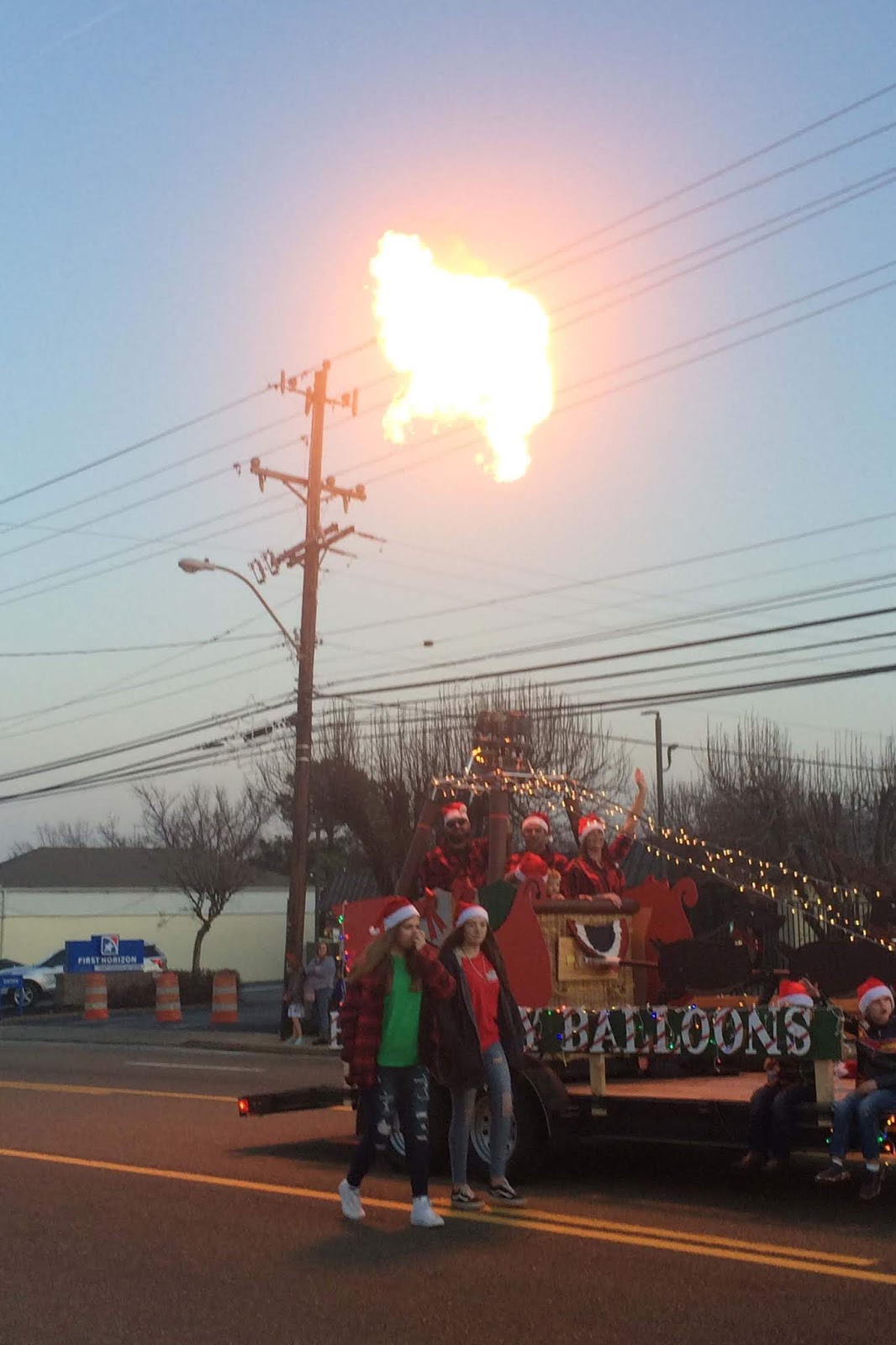 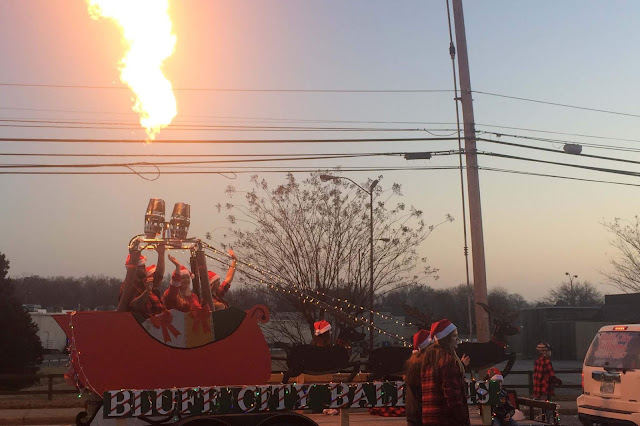 Immediately after the parade we went to our ward party. Maxwell tolerated Santa for a minute but Benson was having none of it. 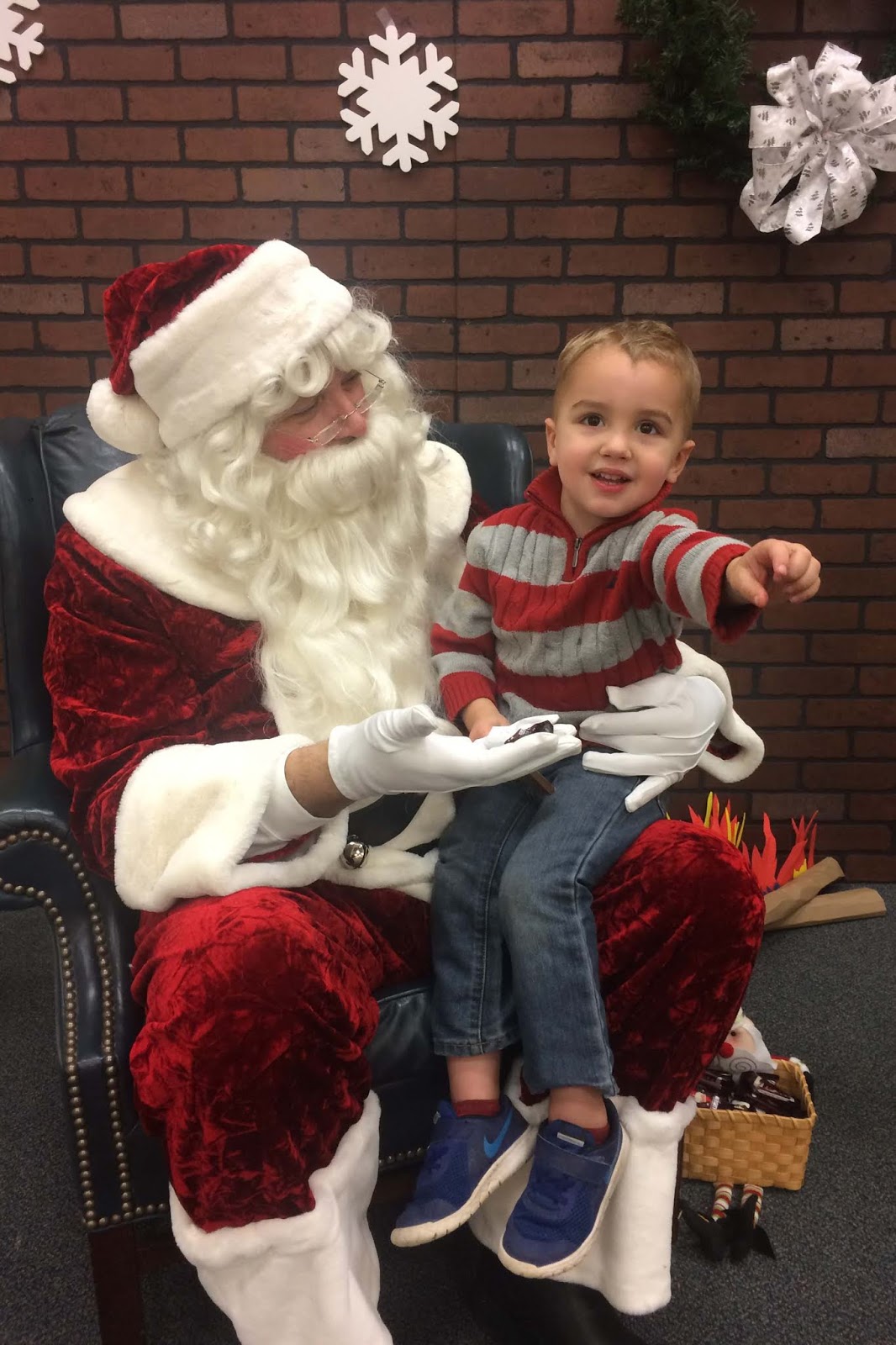 The next day we watched the Christmas Devotional together. Lincoln fell asleep in the middle of it and I thought he looked so peaceful laying there in the glow of the Christmas lights!
(The other $30 tree I got off Craigslist while Sam was in grad school is still going strong.) 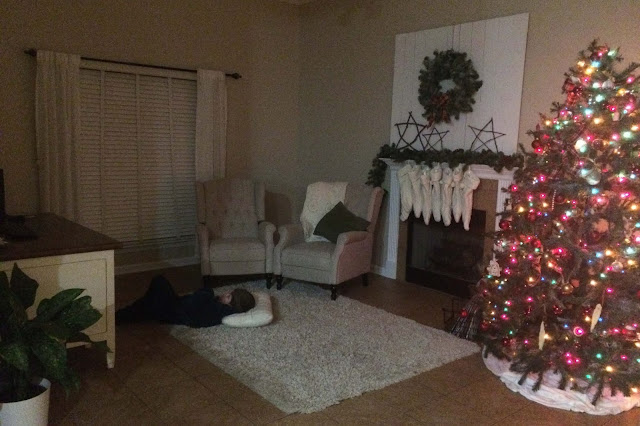 Once again we loved our tradition of unwrapping and reading a Christmas picture book each night by the tree. It is one of my favorite Christmas traditions--everything seems to slow down and magic settles over our whole family. 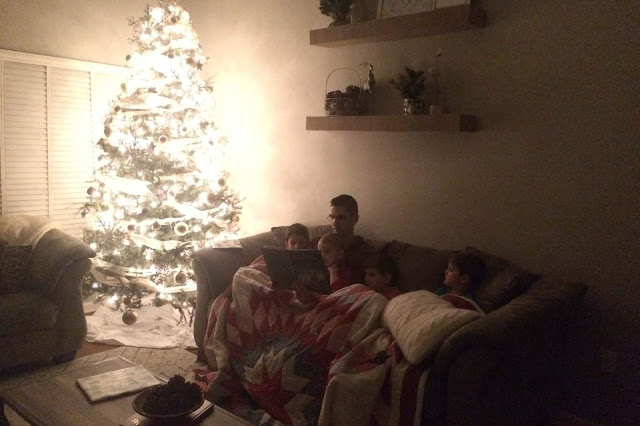 Sam and I went on a date to see the Christmas display at the Pink Palace after going to a Mediterranean restaurant called Casablanca. It couldn't compare to the Festival of Trees in Utah, but it was still fun to see. This Harry Potter tree display had so many fun elements from the books! 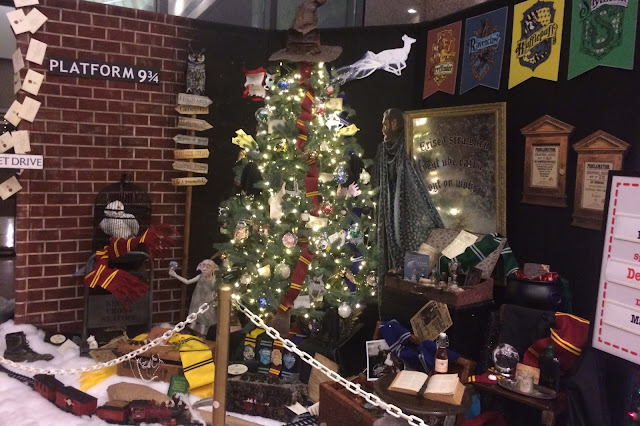 There were several trees covered in decorations pre-schools in the area had made. 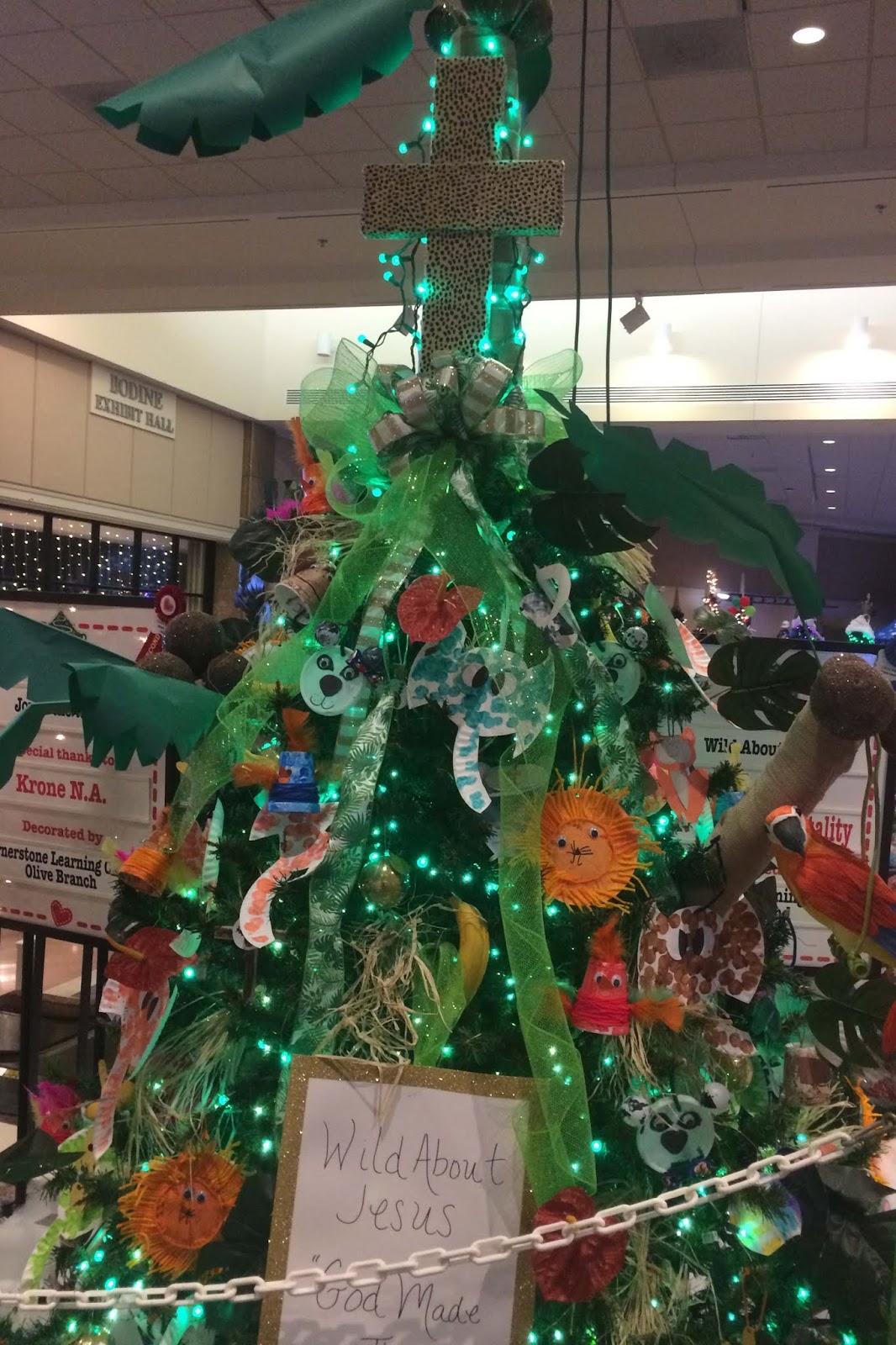 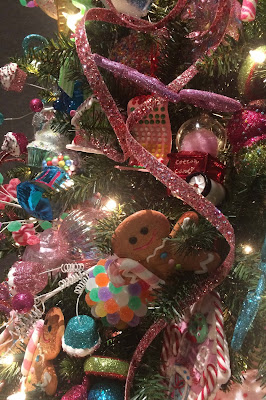 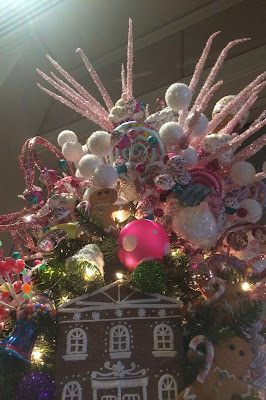 And the gingerbread houses were pretty impressive. You probably can't see it very well, but that Jabba the hut is CRAZY realistic. 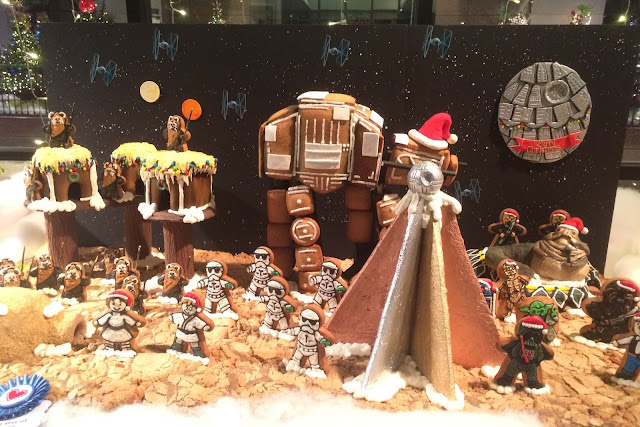 And of course we enjoyed the boys' Christmas programs at school!
It is one of my favorite things to watch them come in and immediately start scanning the crowd to find me and then visibly light up when our eyes meet and they start waving like crazy while Benson and Maxwell shout "HI!" and wave back, eliciting chuckles from the people within about 30 feet of us. 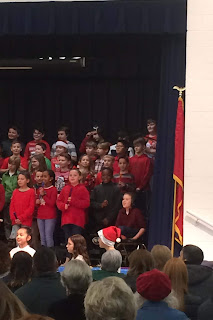 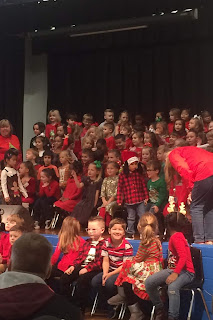 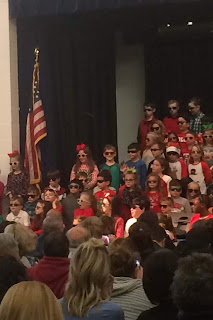 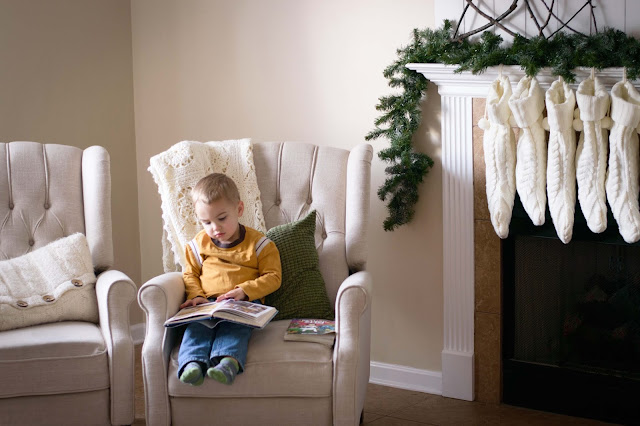 I also made dozens and dozens of orange rolls and we made deliveries for 4 hours!
It was a LOT of work, but every time I think about nixing our tradition of deliveries, I remember touching responses we've received from people who are alone for Christmas or who say it is the only Christmas card they have gotten and I know that it is one of the most meaningful traditions we can continue. The parades and parties and scavenger hunts and such can all go on the back burner if necessary, but this one is here to stay.
Posted by Kaitlyn at 11:00 PM