I keep thinking that I'm almost caught up and will be able to go back to daily journaling,
and then the next big thing happens!
The last quarter of this year has been pretty awesome and very busy.
I still have hundreds of pictures waiting!
Maybe in January I'll get caught up--
in the meantime, you can keep enjoying my posts that took place over a month ago.

Wesley's baptism went very smoothly.
This ward does things differently than others I've been in,
so I was basically in charge of planning and carrying out just about every aspect of the baptism,
and I was really nervous I would forget something.
From making sure the church was scheduled to making sure there were suits in Sam's and Wesley's size to making sure Wesley got his baptism interview, I kept going over and over the logistics in my mind in the week or two leading up to the baptism to be certain we had taken care of everything.
In the end, we didn't forget anything, the lunch all came together, and we had all the preparations in place with time to spare before the service began.

My mom and dad gave the talks,
Breanne and Talmage were the witnesses,
Sam baptized and confirmed Wesley,
and Talmage, Wesley, and Lincoln all sang a musical number together.

It all sounds simple now, but making sure everything was at the church and the gym was all set up to go immediately following the baptism was kind of complicated! In spite of the stress, I'm still glad we had the lunch as it gave us a chance to visit with our friends and gave additional opportunities for people to learn about the Church.
(His official baptism pictures will come later, but here are some pictures Breanne took the day of!) 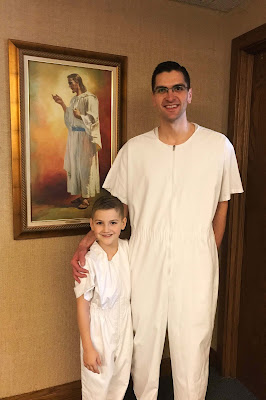 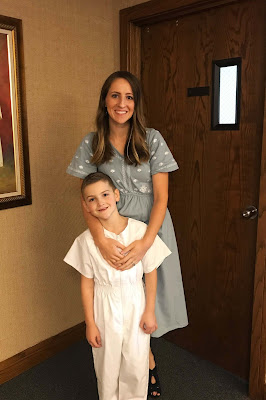 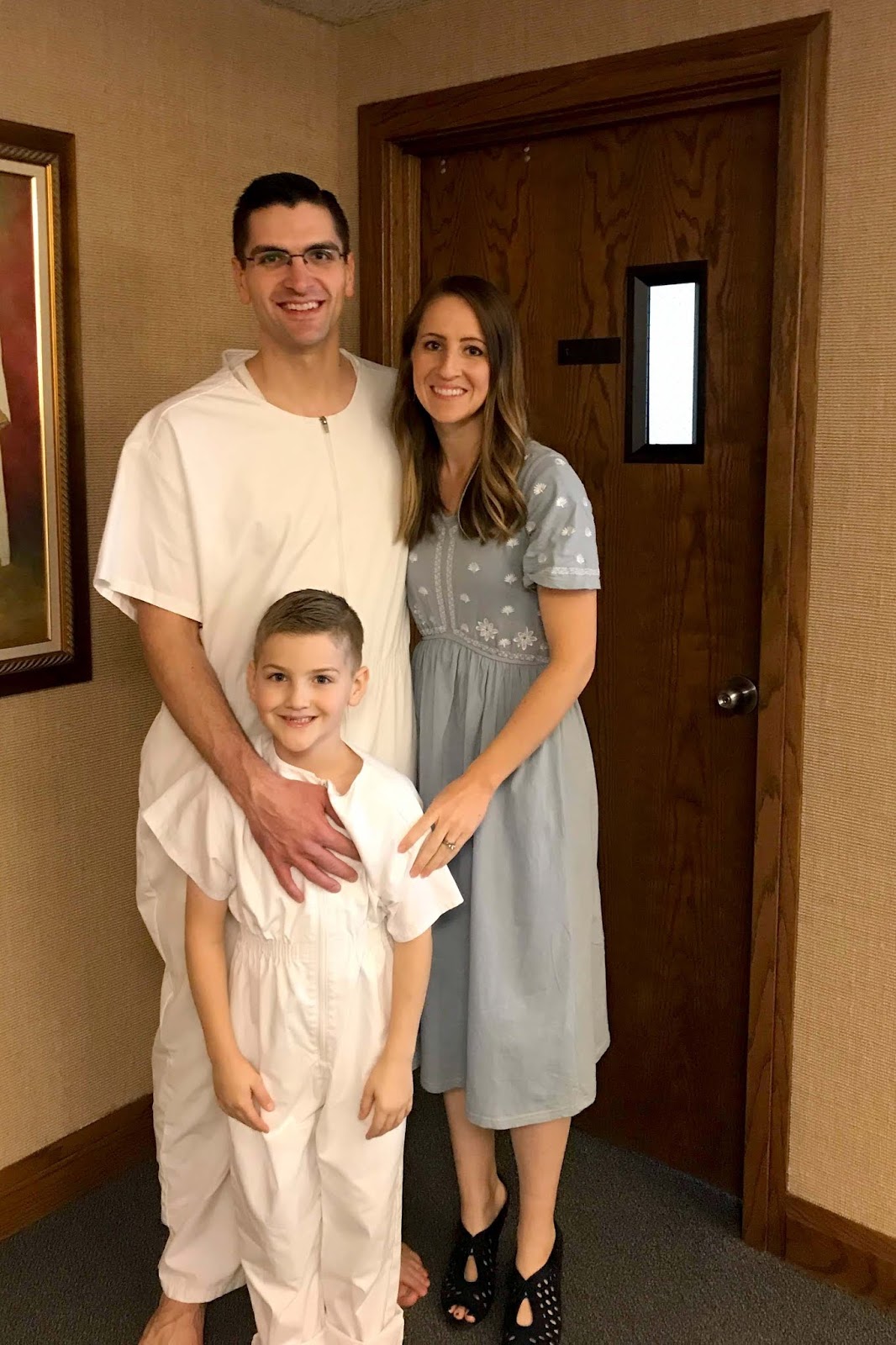 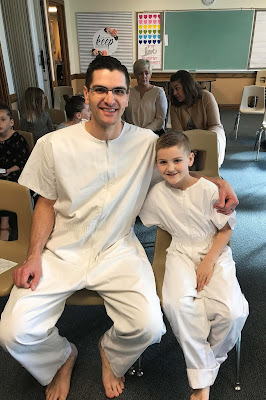 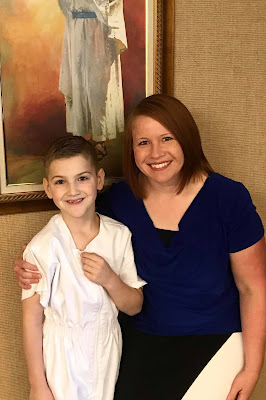 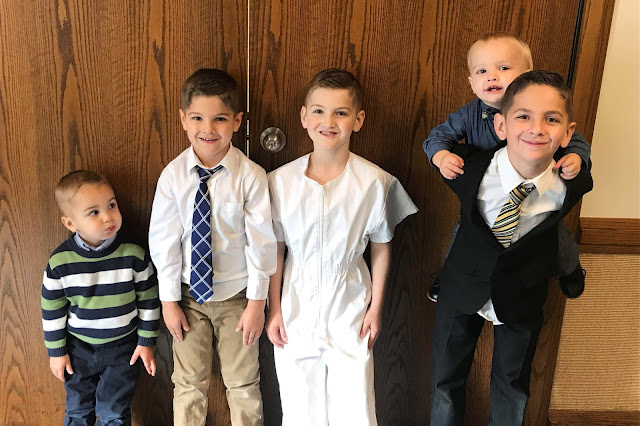 After we got the church cleaned up, we came home and made the alarming discovery that we had no hot water.
Sam worked on loading our bikes into the van while I attempted to wash a huge mountain of dishes with freezing cold water.
Meanwhile, Breanne gave the boys souvenirs from her recent travels, including a new blanket for Wesley from Kenya, to remind him that the Holy Ghost is the Comforter! 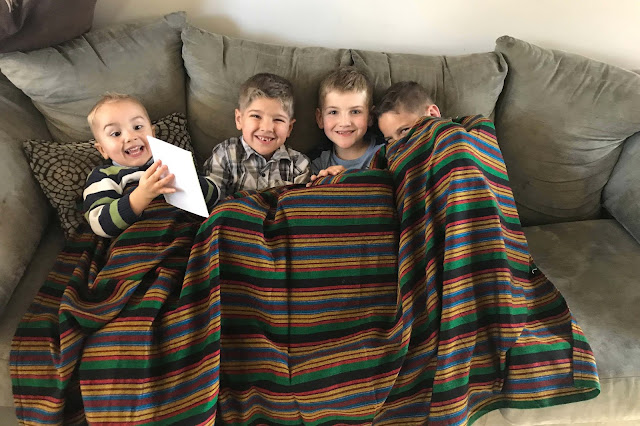 Eventually, my mom, my dad, and Bronson arrived from their hotel and my dad fixed our water heater, which had a connection problem and had been sparking like crazy inside, melting pieces and causing a big fire hazard (thankyouthankyouthankyou)!
We then headed out to ride bikes over the Mississippi River.

Now, I feel that I must inform you all that my mom is a STICKLER about wearing a helmet while riding a bike. Ever since my oldest brother was hit by a car while riding his bike (somersaulting three times in the air and landing on the asphalt on his head with no helmet, miraculously coming away with only a concussion), she has insisted that all of her children wear helmets while riding bikes.

BUT we didn't have enough bikes for everyone, so we had to rent some bikes at the base of the bridge.
And they didn't come with helmets.
She was very concerned about the example she was setting for her grandsons, but in the end I don't think they even noticed. Don't even worry about it, Mom. 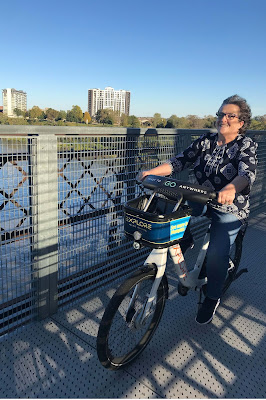 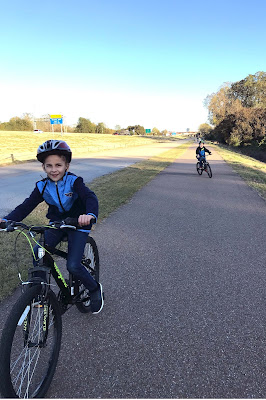 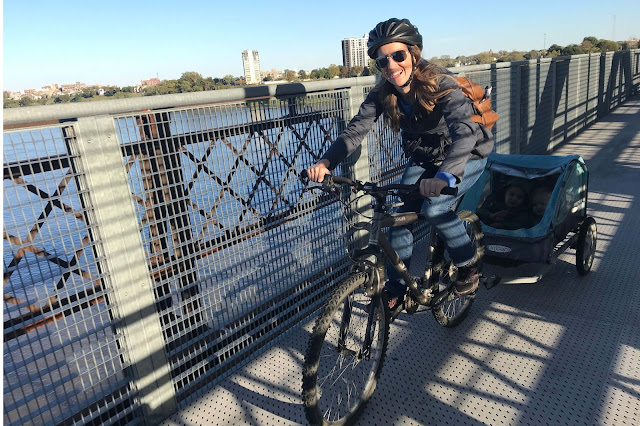 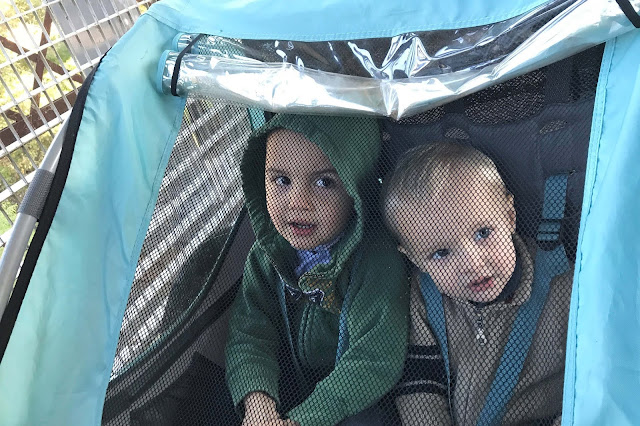 The weather was gorgeous!
Sam always feels like a chauvinist when I am hauling both kids behind me in a trailer and he has no load on his bike. But the thing is, his bike doesn't accommodate the trailer, and my bike is WAY too small for him, so it just makes more sense for me to take both kids. 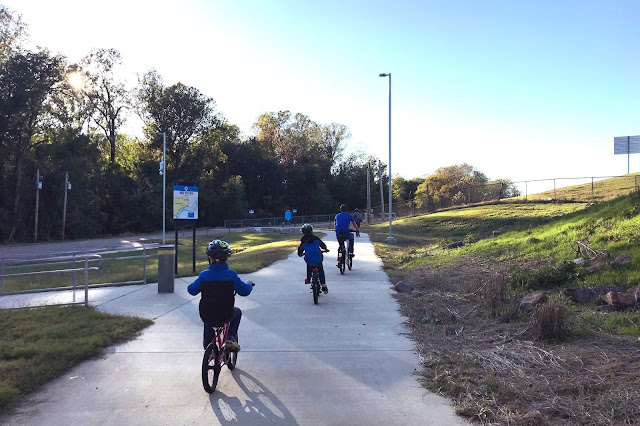 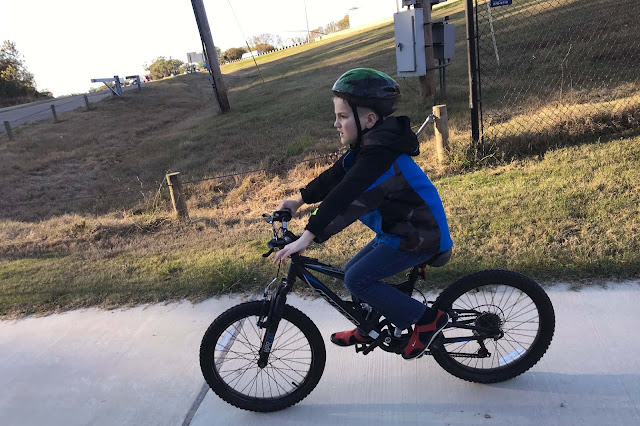 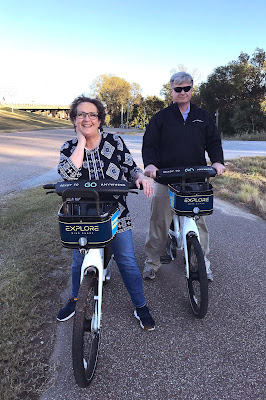 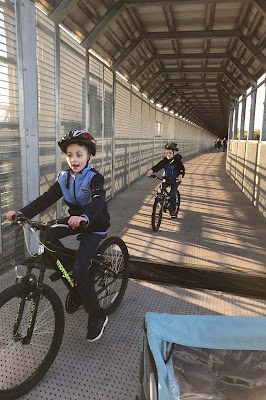 Breanne swapped me out on the ride back into Tennessee,
and after a while Sam had me ride his bike while he took the rental.
His new bike is a complete JOY to ride! 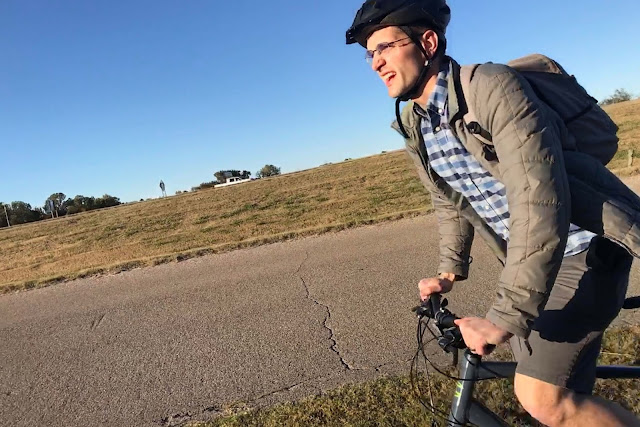 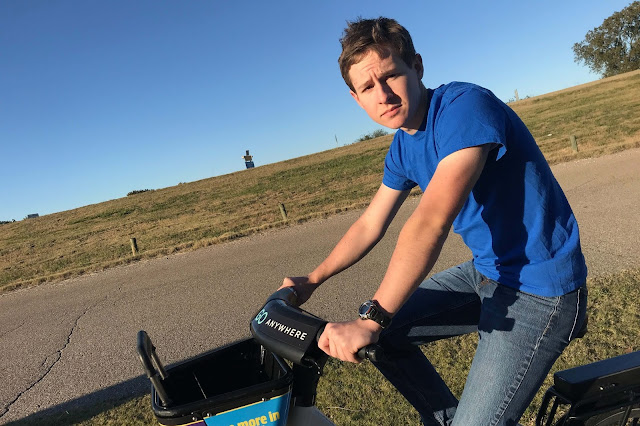 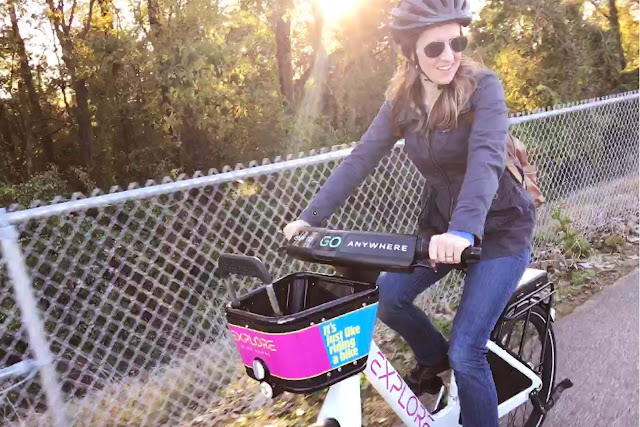 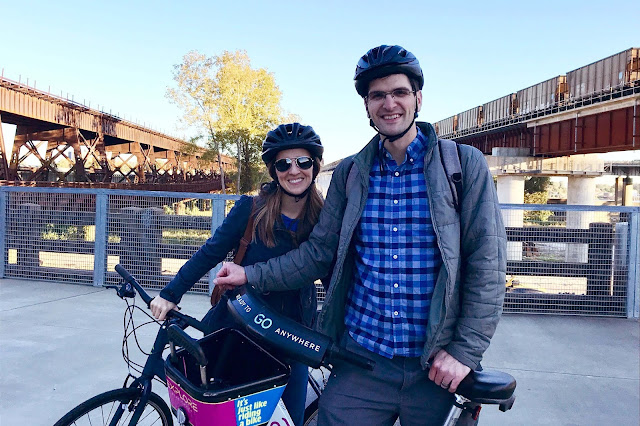 Once again, Breanne took all the pictures. Why didn't I think to take some of her during the ride?? 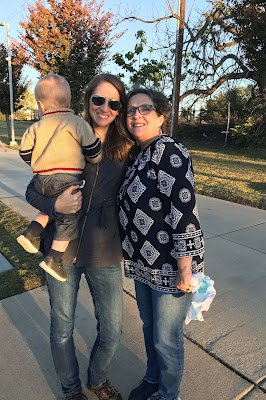 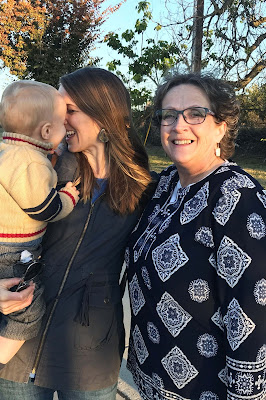 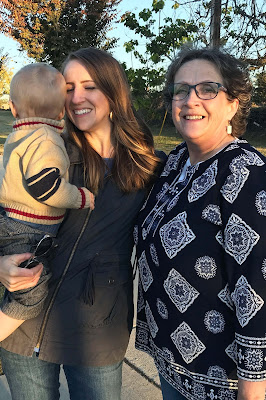 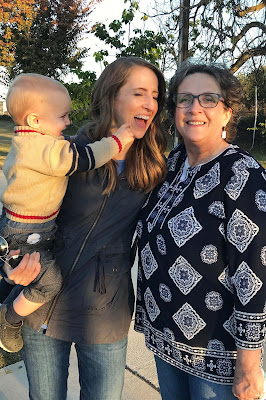 This sequence of pictures makes me smile. I was trying to take a picture with my mom, but Benson decided attacking my face would be more interesting.

After our ride, we headed to Cici's Pizza buffet for dinner!
We wanted to introduce Bronson to Cici's, since my family would go there about once every month or two when we lived in Texas back in the 90s.
Benson was here too--just hiding behind me! 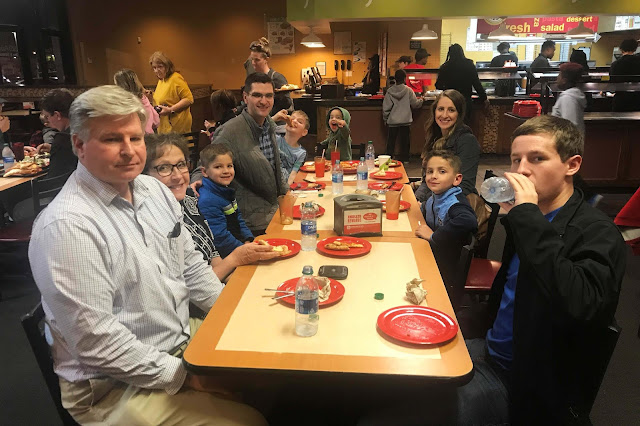 And finally, we ended the day swimming at my parents' hotel one more time,
before giving hugs good-bye, as they would be leaving early the next morning to drive back to Utah.
It was so great to have them here and show them around the place we have called home for the last two years!


**Today's Tidbit: The other day we were walking through the store and Maxwell kept running up to show me things saying, "Speaking of dinosaurs!" "Speaking of snowmans!" "Speaking of Santa!" or whatever it was he was pointing to. It made me smile so much to hear him say since we were never actually "speaking of" what he was showing me.
Posted by Kaitlyn at 1:19 PM