Birthdays for Talmage and Wesley

October 11 and October 22 marked 10 and 8 years old for Talmage and Wesley!
Here's how the days went down:

The morning of Talmage's birthday, there was a Mother's breakfast at the school (a clever and effective ploy to get parents to come to the book fair--the Father's breakfast was earlier in the week).
We had a great time and I was impressed at the great lengths the school volunteers had gone to in order to make the book fair fun and engaging!
There had been a storybook pumpkin contest, which I decided not to do unless my kids asked me to do it.
They never did so I didn't worry about it, but when I saw how cute the pumpkins were, I immediately started telling the boys that we need to do one for next year!
The pumpkins were displayed in a Winter Wonderland tent. 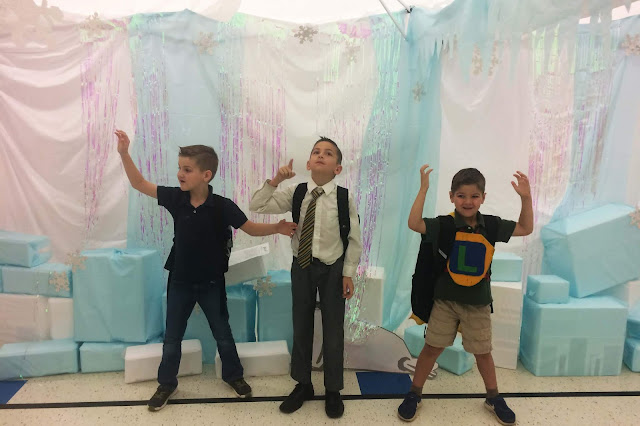 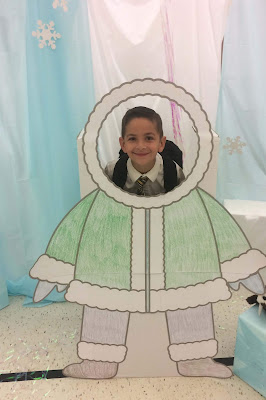 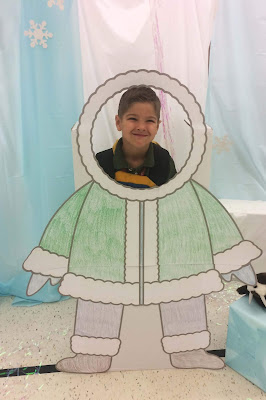 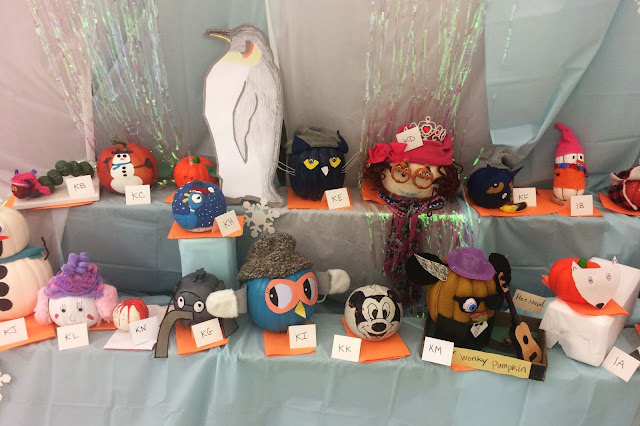 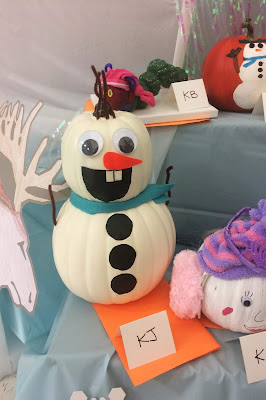 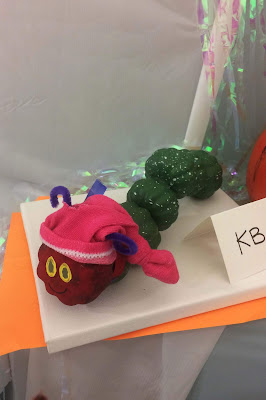 The boys ended up using their birthday money from relatives to get some new books,
and after I told them good-bye I came home to pick up Sam and take him to his chiropractic appointment in Mississippi.
After his appointment, Maxwell and Benson started holding hands in the car on their own and I just about died of the cuteness: 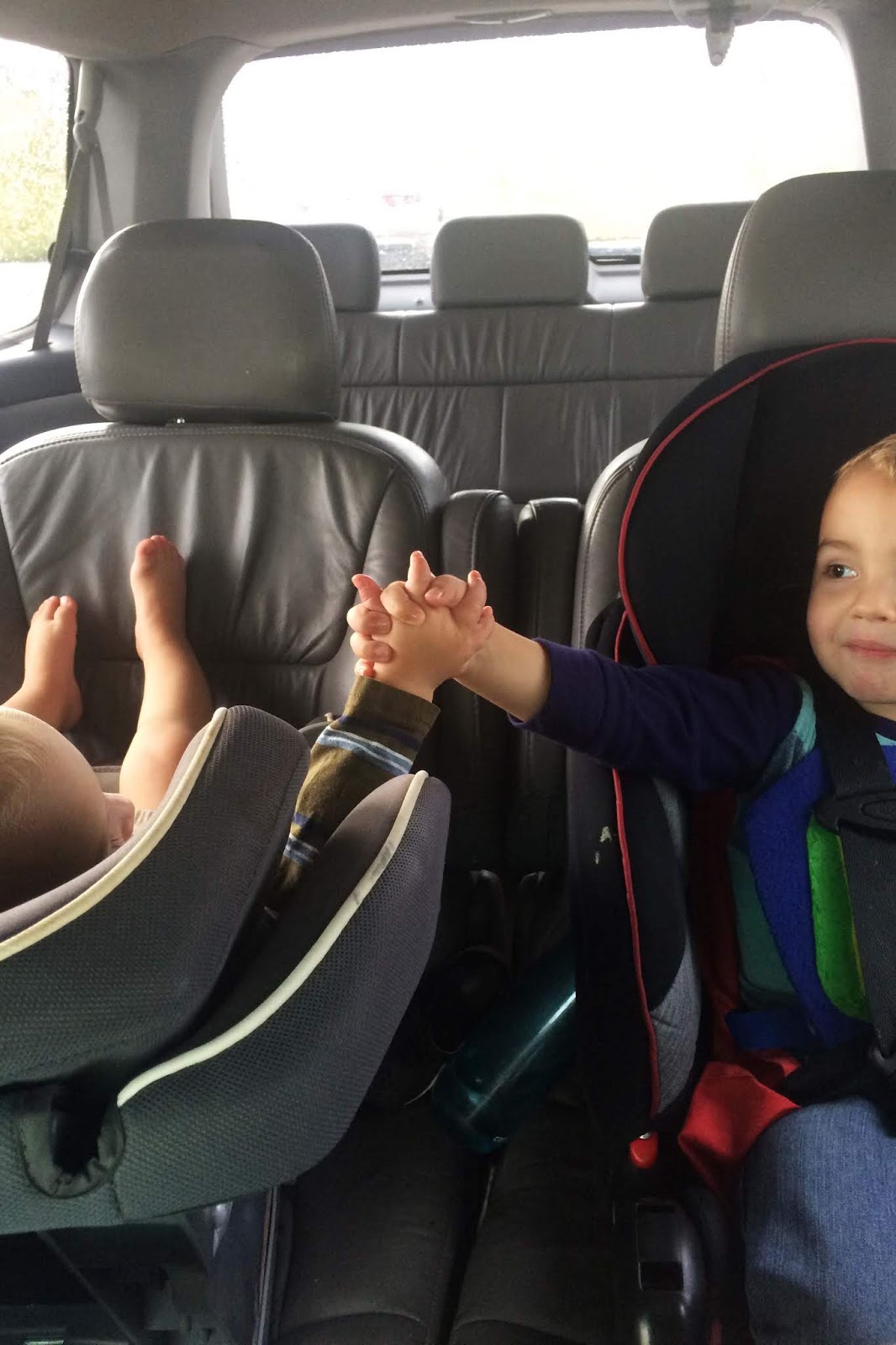 We dropped Sam off at work, stopped by the house to grab my shopping list, ran to the grocery store to pick up some things for Talmage's birthday dinner and treats for his class, gassed up the car, and bought him a cheeseburger before going back to the school to have lunch with him.
Rain had been pouring down all morning, and with the craziness of all the errands, by the time I got back to the school I was quite a sight to behold.
My hair resembled a wet dog, so I looked fruitlessly around the car for an elastic or something to tie it back with. At last, I saw the solution!
Benson's sock!
Talmage got the biggest kick out of it when I showed him at lunch and wanted to point it out in some pictures.
(My phone takes super grainy pictures in lower light. Just throwin' it back to 1992.) 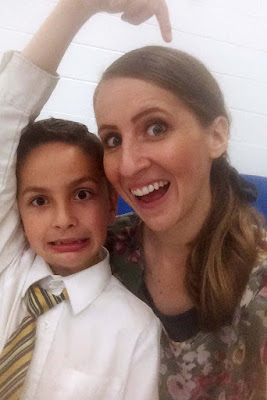 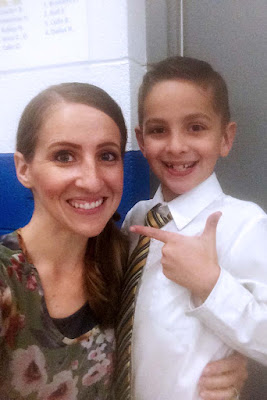 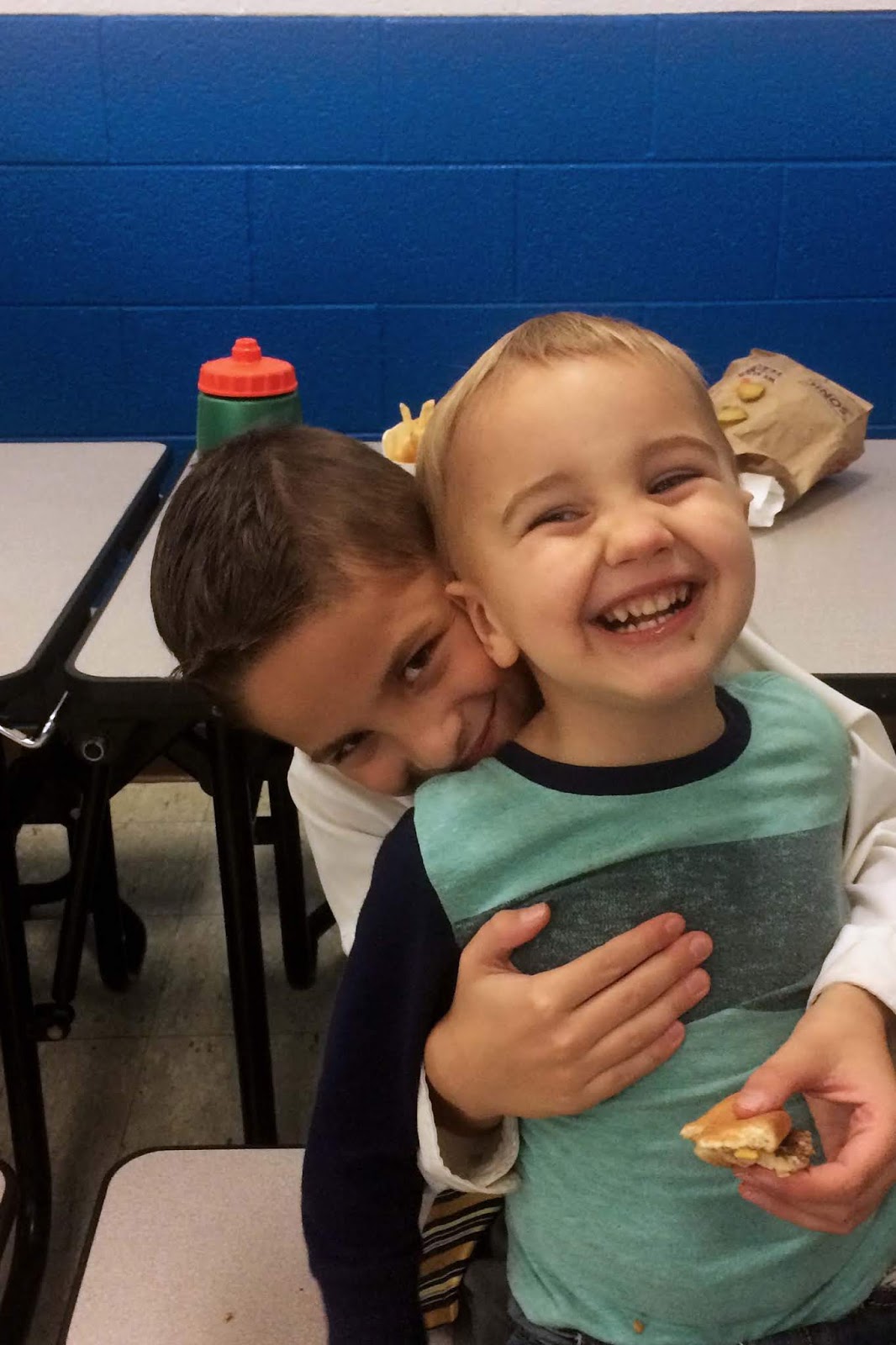 When I got home from the school, I started on the birthday boy's dinner.
He requested:
tortellini with pesto
baked potatoes
chocolate bran muffins
sliced apples
brownies
moose tracks ice cream 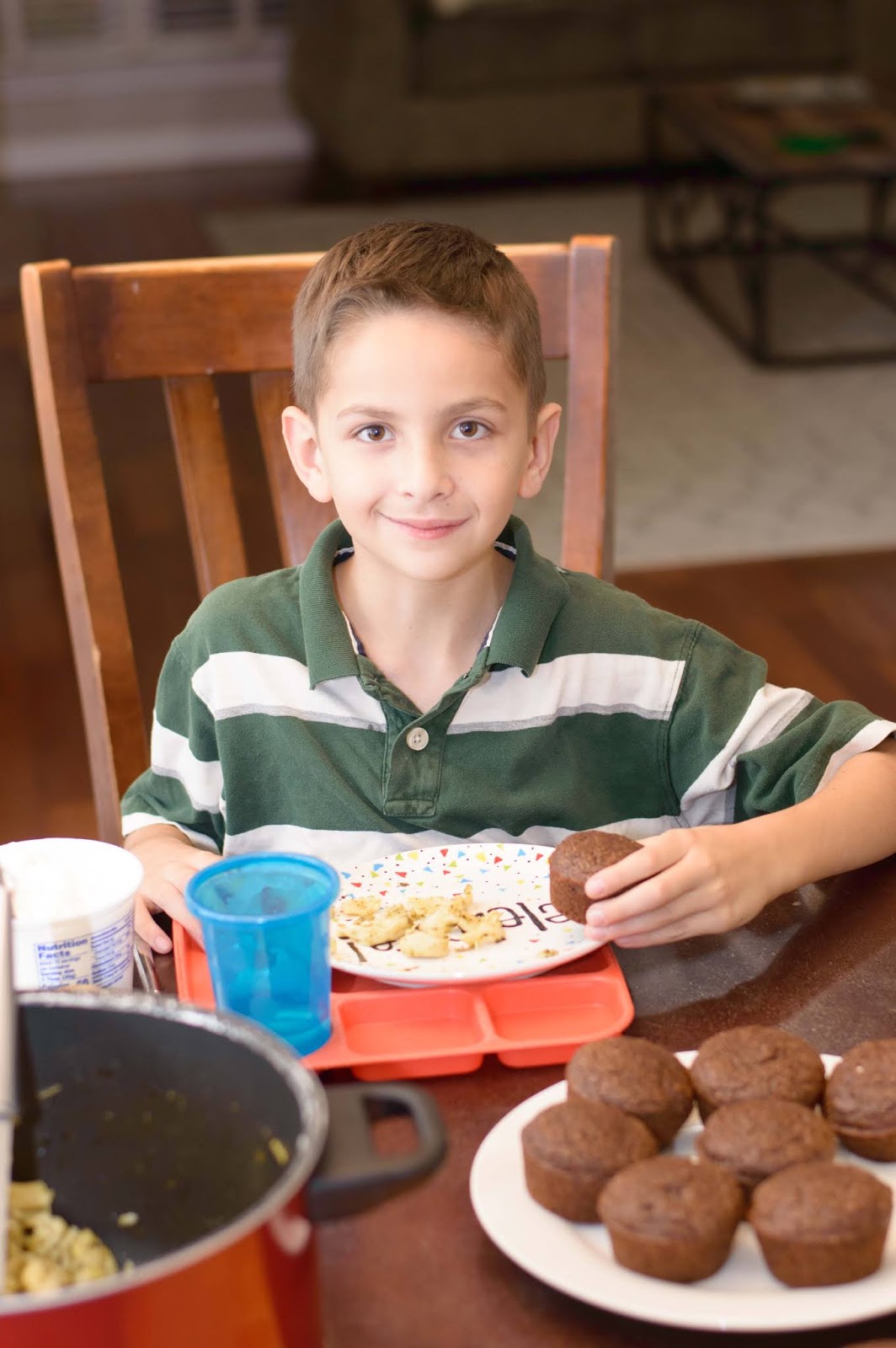 Talmage has invented a superhero called Electryke. He has written loads of comic books about him, draws countless pictures of him, makes up stories about him, and has even made coloring and activity books about him for his brothers! He wanted Electryke to be drawn on his brownies with melted white chocolate. He and I worked on it together. 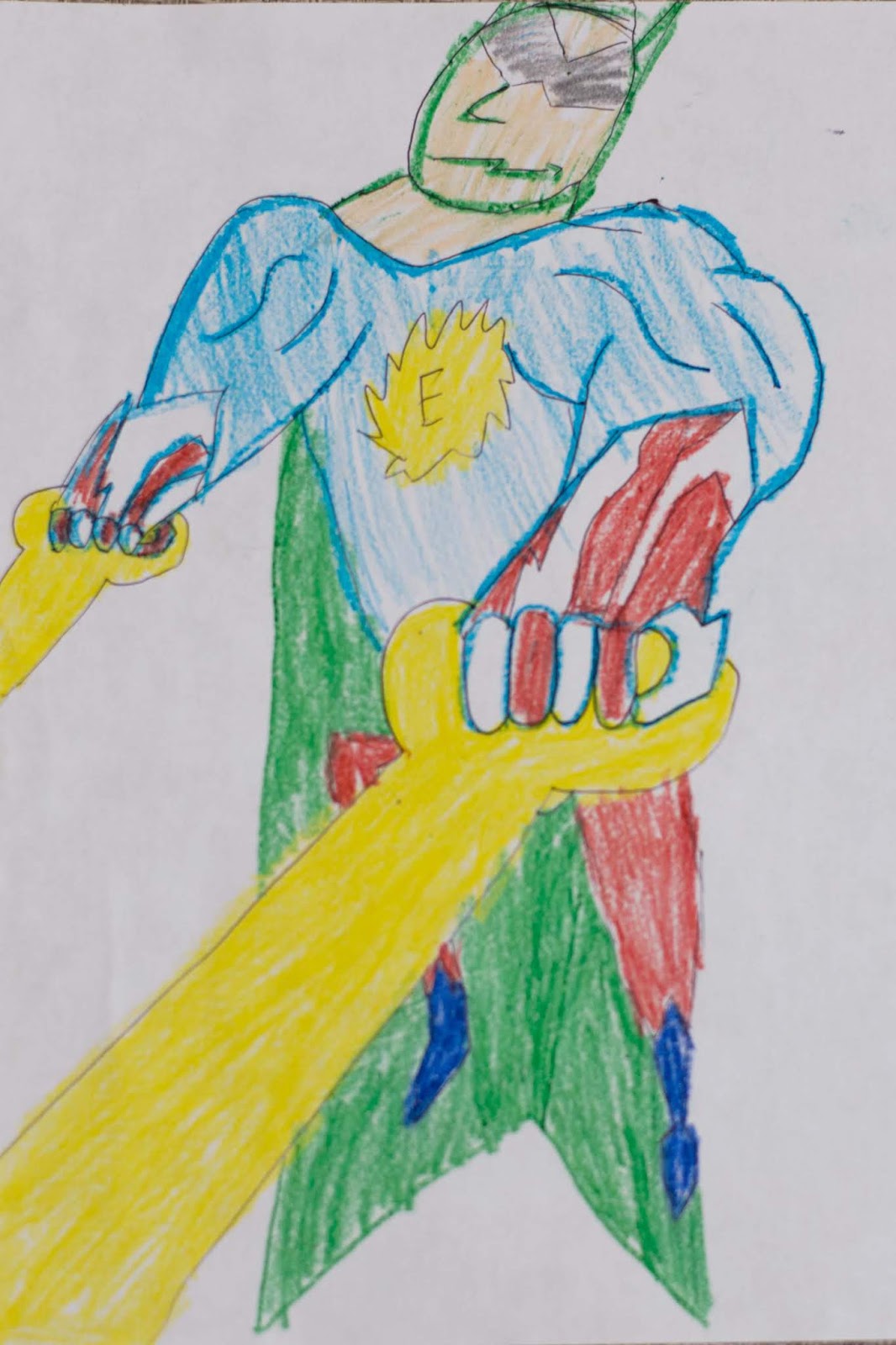 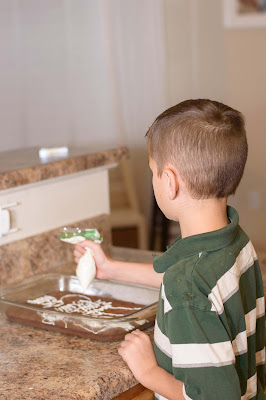 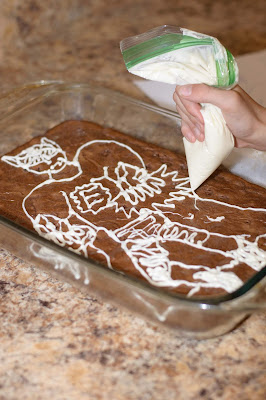 And Wesley drew his own version of Electryke for him as a birthday present! 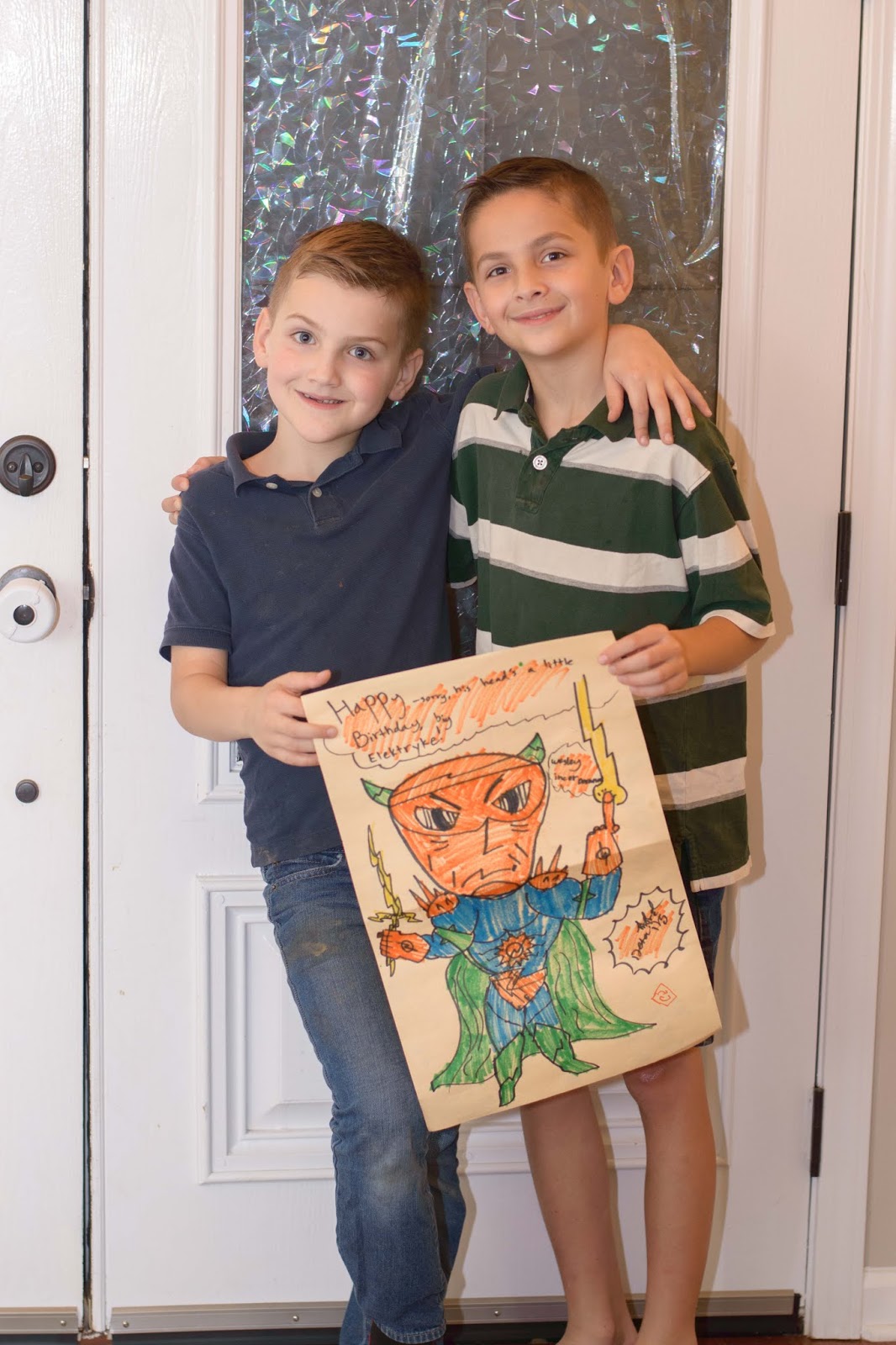 He opted to search for his presents. It was a happy evening for him!
(Note the 6 rolls of masking tape from my parents...while shopping at the "Grandma store" over Facetime with my mom, that is what he wanted more than Legos or Beyblades or games or sporting equipment...he is an inventor through and through! 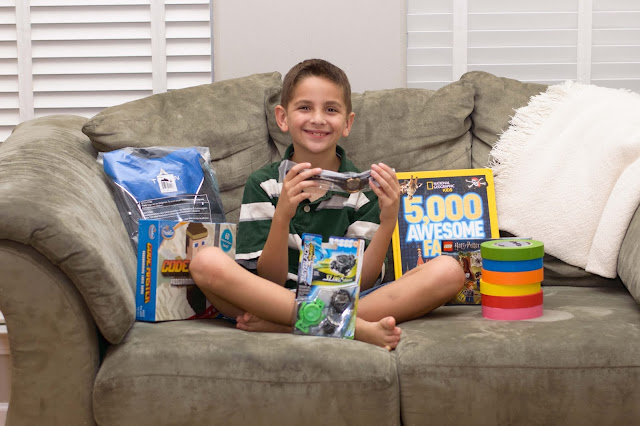 Sam had a church conflict on Wesley's birthday, so we had his birthday dinner and presents the day before. 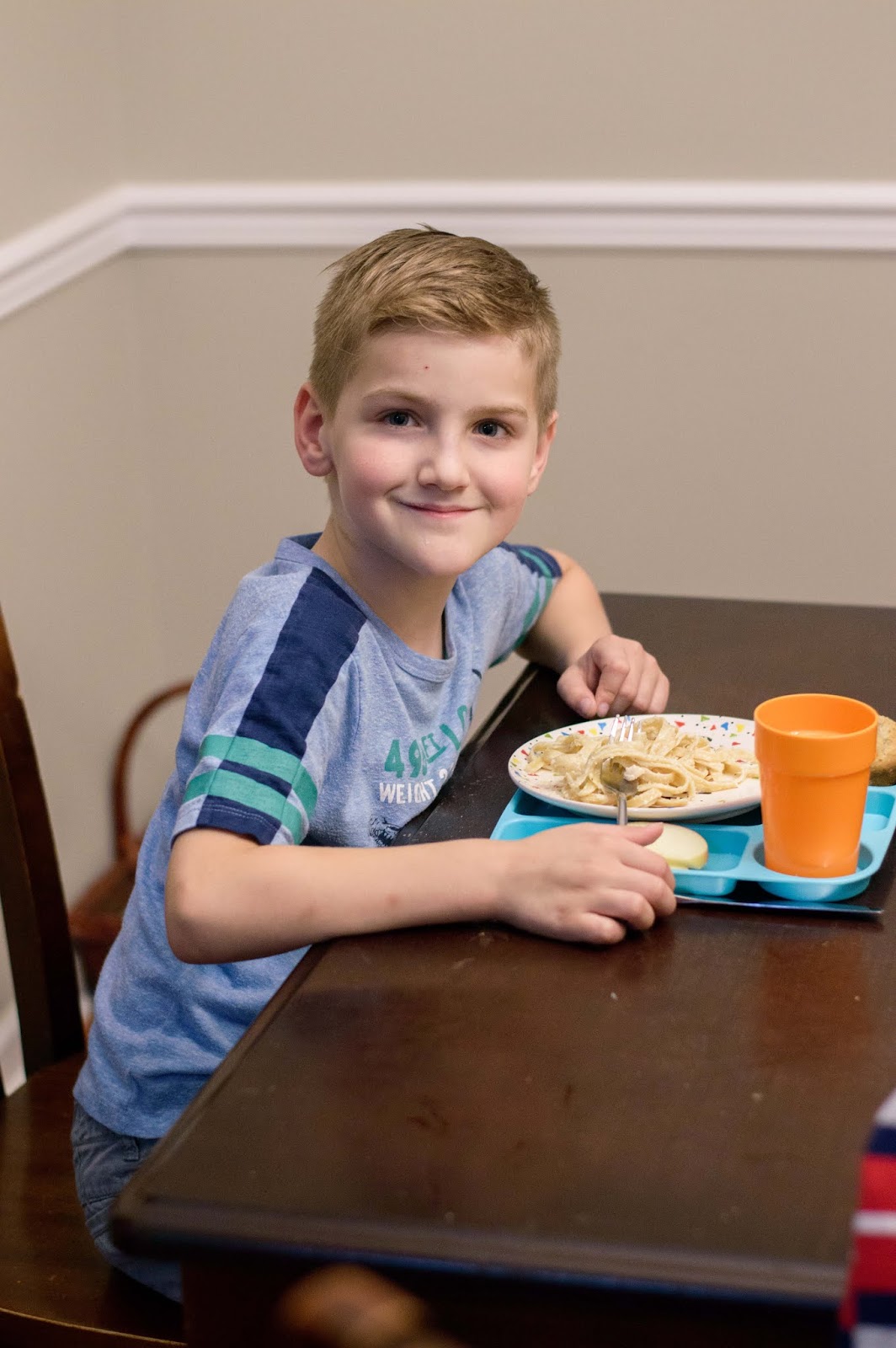 For dinner he wanted fettuccine alfredo with chicken, apples, and banana muffins. 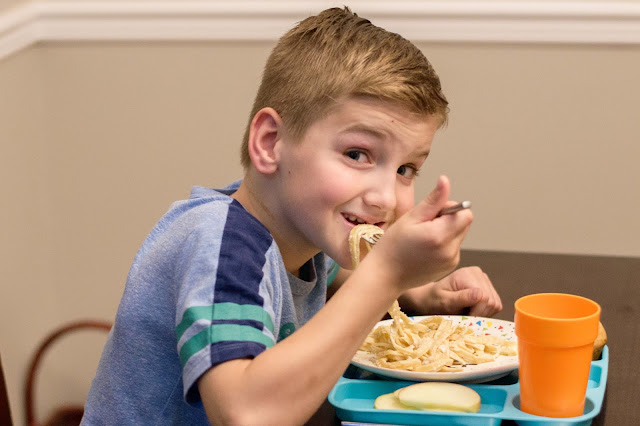 And his cake had Cogman, a transformer he desperately wanted, perched on top of a pile of brownie rubble, held together with white chocolate Oreo cream cheese frosting.
Easiest cake ever!
We served it with cookies 'n cream ice cream. 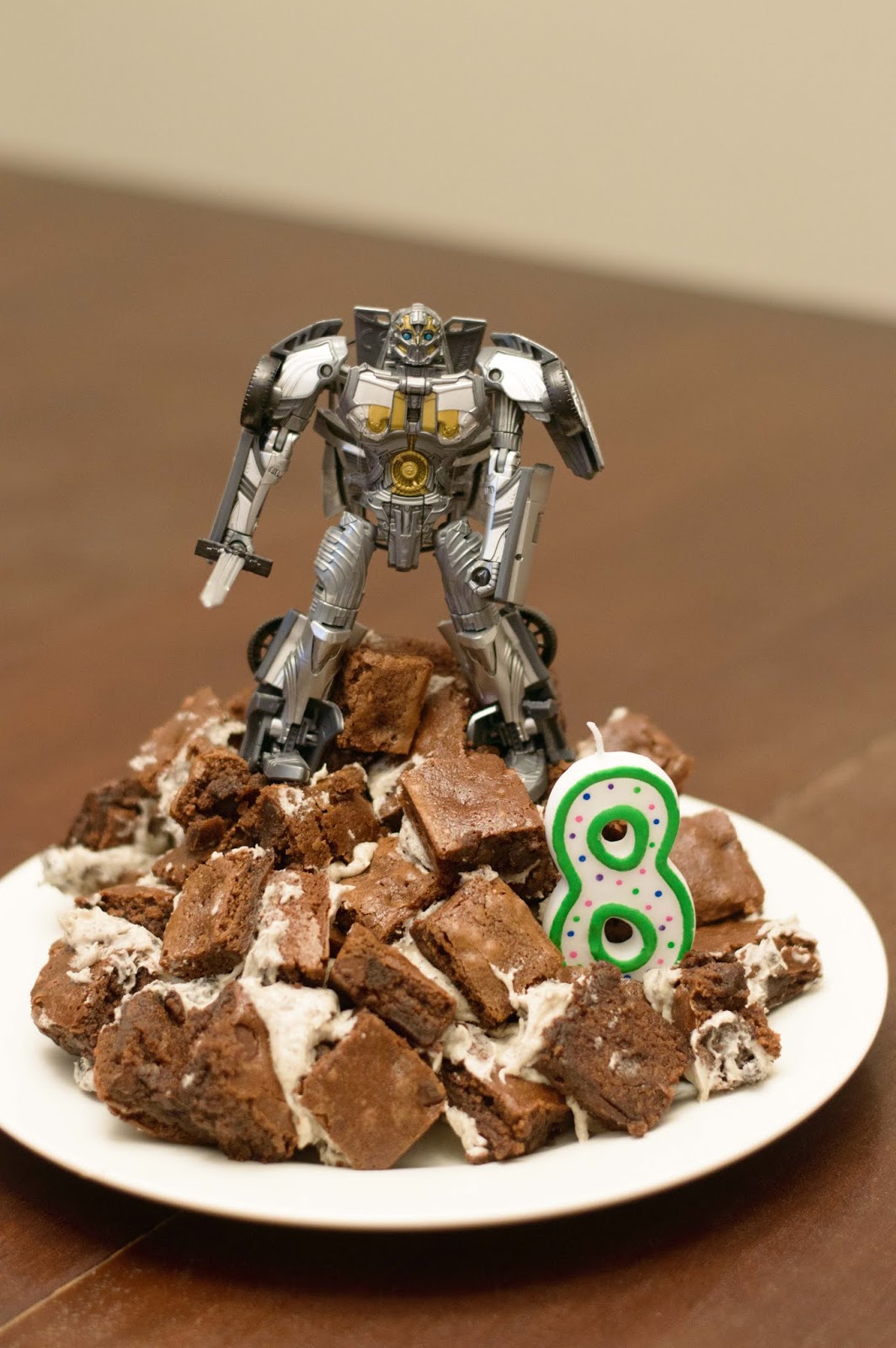 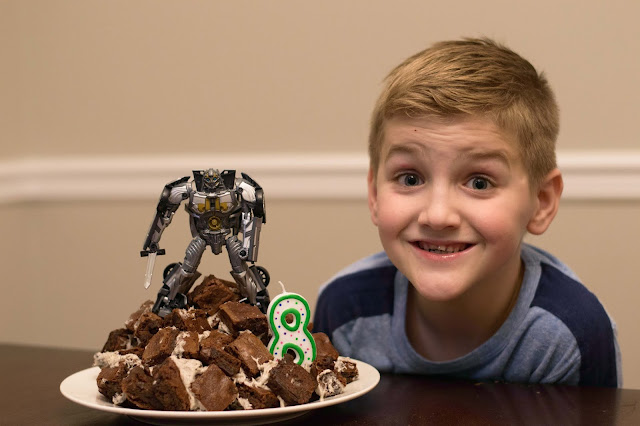 He also elected to find his presents rather than having them wrapped. 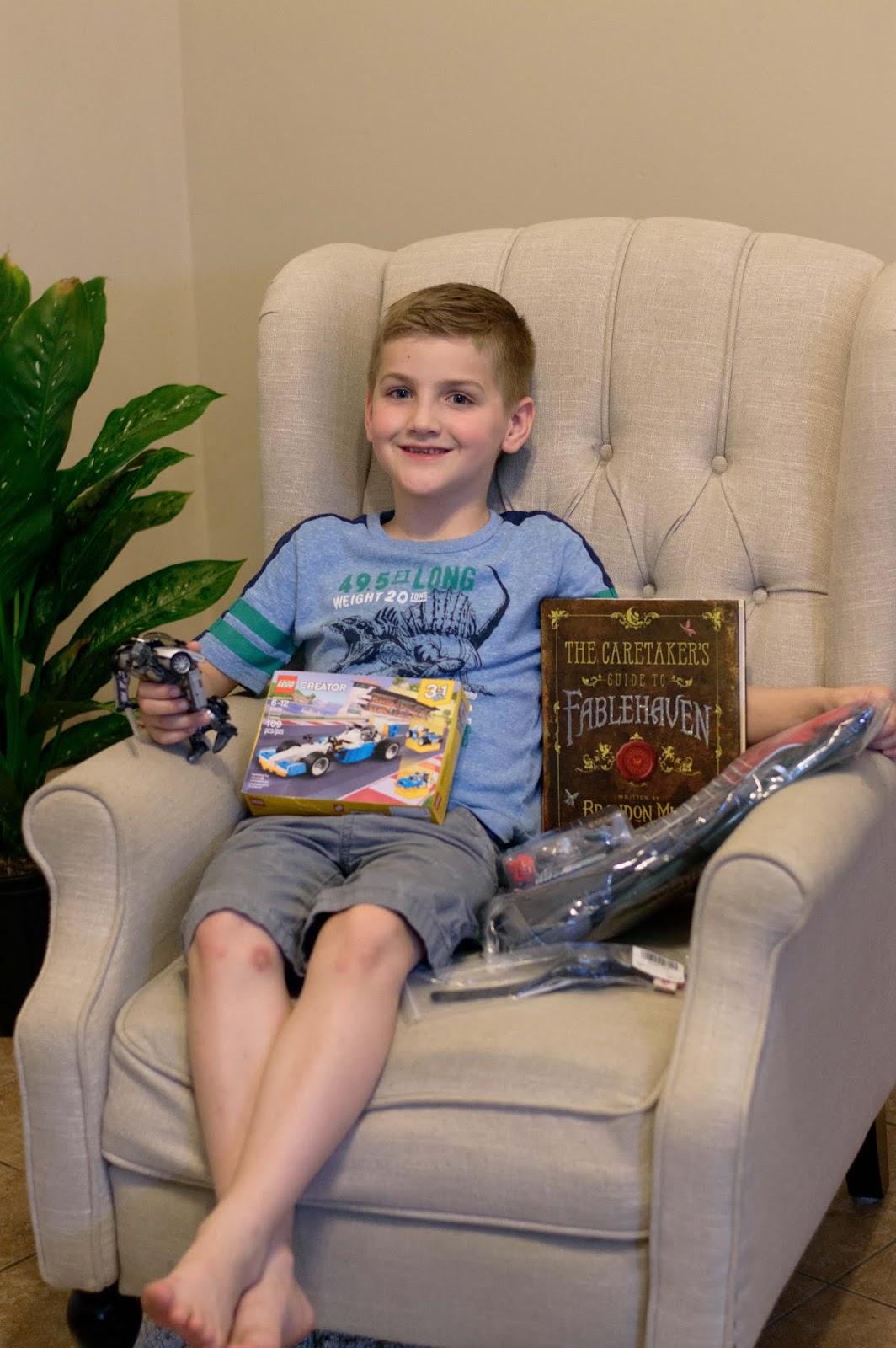 The next day, on his actual birthday, we met up with him at school for his birthday lunch and to take treats to his class. He has recently hopped on the cheeseburger bandwagon with Talmage, after many years of avoiding them, so he wanted a Wendy's cheeseburger. 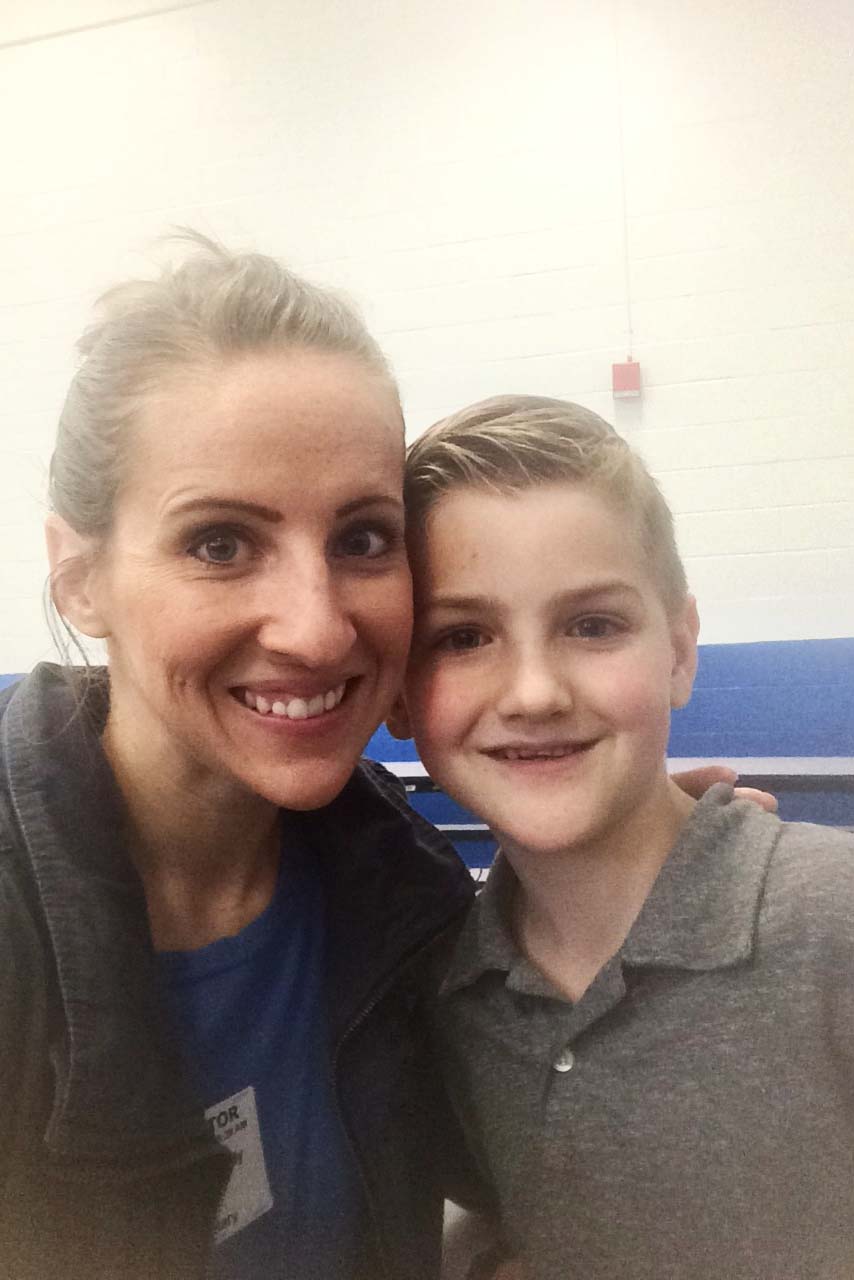 Eight is a big birthday at our house, so there were lots of accompanying activities that will be highlighted on the blog in days to come!

**Today's Tidbit:  Did you know God cares about baby shoes? Benson is the king of kicking off one shoe. He has lost one shoe from SO many pairs of shoes! Today we got home from a consignment store about 15 minutes from my house and I noticed he had only one shoe on. I called the store, but they hadn't seen it. I got the boys lunch and in our prayer over the lunch we prayed that we would be able to find his shoe. We then headed back to the store. And there, in the spot I had previously parked, was the shoe! He lost one of the SAME pair of shoes at the mall a month or two ago and I didn't noticed until we were getting into the car. I had walked all over the mall, but I headed back in with a prayer and guess what? I found the shoe within 5 minutes.
When Wesley was a baby, he had a cute little pair of shoes that, although weren't needed (since he wasn't walking yet), I just loved. I was running some errands one day and I stopped by Sally Beauty Supply and then went to Walmart. In the Walmart parking lot, I noticed his shoe was gone. I looked all over the place, retracing my steps, but to no avail. I even drove back to Sally Beauty Supply and asked the employee there. "He had them both on when you left," she told me confidently. "I know because I looked at him and noticed how cute his little shoes were." I gave it up as a lost cause and went home. I took his remaining shoe and went to put it in his drawer and...his other shoe was in the drawer!! You can't explain that away.
I know Heavenly Father loves us and wants to help us, even in matters as trivial as baby shoes.
Posted by Kaitlyn at 1:59 PM