About a week and a half ago,
I was sitting on the floor in the boys' room sorting Legos (an endless task).
From the corner of my eye, I spotted movement, so I glanced up and saw a somewhat large brown spider crawling quickly toward me.
I REALLY don't like spiders (although having kids has mostly forced me out of my irrational fear of them),
so I quickly grabbed a large Lego and smashed the little visitor.

After smashing it, I began looking closer at it and thought it might be a brown recluse spider.
I grabbed the cell phone camera microscope Sam's mom gave him and took a close-up picture and then began comparing it to pictures online, noting the violin shape on its back and the three sets of two eyes--a defining feature of brown recluse spiders.
And then I began to panic a little bit because my picture looked an awful lot like the ones I was seeing online!
(Top picture from here, bottom picture is mine) 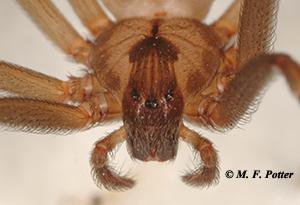 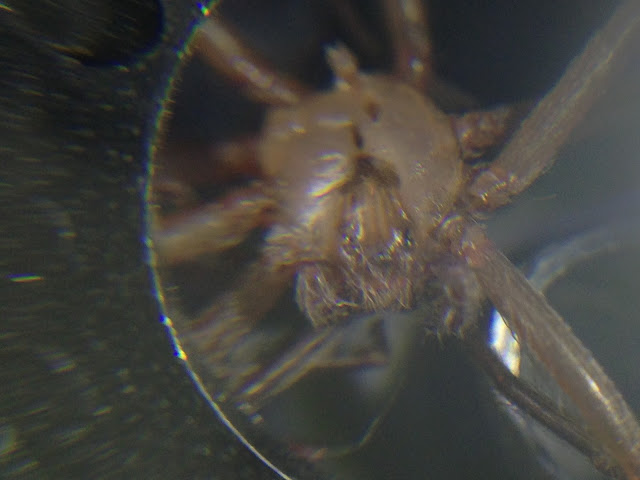 Of course my imagination started going crazy,
especially since I thought brown RECLUSE spiders were supposed to be reclusive!
Why wasn't it in the attic, or a dark closet, or some untouched corner of the garage??
Why was it running across the floor of my boys' bedroom in bright light?
DID THIS MEAN WE HAD AN INFESTATION?!?

I quickly texted our landlord and asked her to send the pest control guy to come spray.
6 days later
(days that were filled with me shaking every linen I touched before folding it, warily searching the corners of rooms, and researching the problems that came from bites)
the pest control guy knocked on the door.
I let him in and almost immediately told him about the spider.

"Wolf spiders and brown recluse spiders look exactly the same," he said. "The only way to tell them apart is to flip them over and look at the eyes."
I explained that I had looked at the eyes, but it was clear that he was skeptical.
Our house just doesn't fit the mold to have brown recluse spiders.
I told him that I had taken a picture and would show him.
And I admit, I felt a little triumphant when he glanced at my picture and immediately said, "Yeeaaaahh...that's a brown recluse."
I KNEW IT!

I begged him to watch for signs as he sprayed the house,
and when he finished he told me he hadn't seen signs of any problems besides quite a few spiders on the outside of the house and signs of a few water bugs in the attic.
He reassured me that the poison would take care of any rogue spiders and as he left he said,
"If you see so much as an ant, call me!"

Phew.
I could breathe easy once again.
Except I'm still scared of ticks, and all the health problems that come from them.
They are abundant in Tennessee.
My friend told me that when she was young she was walking through some tall grass on the side of the road and later discovered over 40 ticks in her legs!!!!
I'm pretty sure I need to deal with at least one so I can get over my fear.

In the meantime, I'll pat myself on the back for having lived through a black widow and a brown recluse.
Posted by Kaitlyn at 12:13 PM