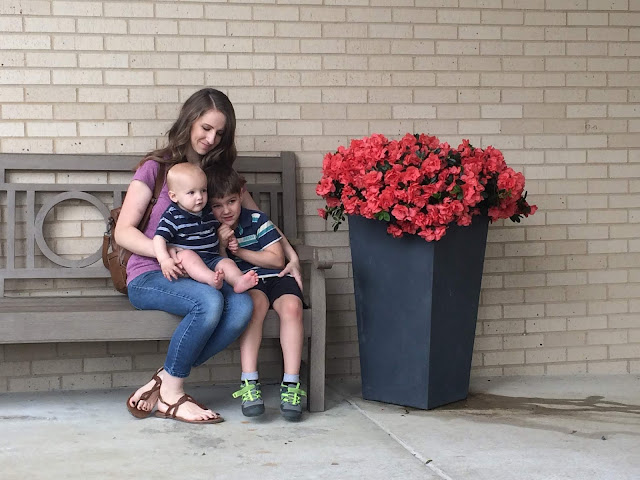 This is my favorite time of year here in Tennessee.
Springtime here is really quite blissful.
The heat and humidity haven't shot up yet, the trees burst into bloom everywhere, and the wildlife is lovely!
I am busy making plans for Summer, including
a weekly bookclub for the older boys and I,
building a backyard obstacle course,
ice blocking,
a camping trip,
and a 30 mile bike ride for my 30th birthday.

Planning is always so exciting for me!

The other day Lincoln was drawing with sidewalk chalk and he found a way to make "gray chalk," by scribbling a bunch of chalk down and mixing the powder with a handful of dirt.
He was showing me his invention and then suddenly asked,
"But what if someone somewhere else has already invented gray chalk? Do you think I will get sowed?"

I held back my laughter and explained that he couldn't get sued even if someone had already invented it.
Then I asked him where he learned about getting sued.
His answer was the same as it usually is:
"Talmage told me about it."
Apparently they've been having discussions about copyright infringement...it's pretty important for a 5-year-old to know about, you know.

Last night when I discovered that Lincoln had splashed water ALL OVER the bathroom I explained to him that I was feeling really frustrated about it.
"Did you know that could destroy our house?" I asked,
imagining peeling paint, water dripping through the floor, and marks on the ceiling.
He nodded sadly
and said, "Talmage told me...it could get so moldy that the entire room could collapse and fall into the rest of the house..."

I didn't bother to correct the picture that painted for him.
After all, peeling paint is almost as terrible as the second floor bathroom collapsing, right?!?

Our boys' conversations are pretty much my favorite.
Posted by Kaitlyn at 1:19 PM