While we were in Utah, my parents hired a photographer to take pictures of the entire family.
It's rare to have a time when all 25 of us are in one place!
My parents kept the wardrobe guidelines very simple--solid colors, business casual.
They worked hard to make things as non-stressful as possible for everyone.
But a couple of days before the scheduled photo shoot, the forecast was predicting temperatures in the low 20s and the location was still undecided. The photographer was trying to figure out a place where we would all fit that had good light and wouldn't be muddy.
Eventually my sister suggested the park adjacent to her backyard. Everyone could stay in her house until it was time for pictures and then we could quickly run out, snap a few photos, and get the kids back inside to the warmth.
It was the perfect solution.
Or so we thought.

The day before pictures were scheduled, while we were still at Bear Lake, a little tummy bug began circulating through some of the kids. The next morning, as we were packing everything up and getting the vacation house cleaned up, Maxwell began throwing up. I alternated between packing our things, finding missing shoes and socks, and trying to catch throw up and then cleaning up whatever I missed while Sam loaded up cars.

We got everyone and everything loaded into the minivan and almost didn't make it up the steep, ice-covered driveway to the road. Maxwell continued to throw up through the first portion of our drive and the kids were squabbling non-stop in the backseat.
At one point the squabbling increased to the point that Sam pulled over the car and turned around to lay down the law. My heart sank when he put the car in gear again and, as he pushed on the gas, it slid further off the road into the snowbank. Every attempt to extract ourselves made the situation worse.
And so we sat.
In a tiny town in Northern Utah.
And we said a prayer.
And I called my parents, knowing they were a few minutes behind us in their truck and would be able to pull us out of the snow.
As I was on the phone with my mom, two older men in a big truck stopped to see if we needed help.
Sam jumped out of the car and they worked together to hook up the tow rope, dig snow away from the minivan, and pull us out with the assistance of my dad and my brother who had pulled up partway through the rescue effort.

We were grateful and a little bit sheepish.
The events of the morning played through my mind and as we drove I told Sam that whenever we get together with my family I feel like our family is a liability and not a help! We have five little boys to keep track of, which limits our ability to provide a lot of extra help to everyone in our big family events. When we were in school, we didn't have the resources to contribute a lot of supplies at things like camping trips, and now we live across the country so we can't haul many supplies with us. Often I feel like our family is the one causing problems while contributing very little.

Blessedly, Maxwell fell asleep and his vomiting came to an end.
By the time we pulled up to my parents' house, I was ready to tackle the job of getting everyone ready for pictures. We hurriedly unloaded the car and I ran to the store to pick up a few clothing items for the kids. When I got home we began showering everyone and attempted to find shoes and belts in our enormous mountain of suitcases and Christmas gifts. Wesley's belt was nowhere to be found, but other than that everything was gathered, everyone was clean, Maxwell was still not throwing up and was rather cheerful, and aside from Benson screaming for about 20 minutes straight as we finished preparations because he needed to nap, we were golden.
We loaded into the car and pulled up to my sister's house just as the photographer arrived.
Maybe everything would work out this time!
Maybe, for once, we wouldn't cause all the problems!
Wrong.

The family filed out to the trail around the park where the photographer was set up and immediately Benson started fussing about the cold. We wrapped him in a blanket to keep him warm until we were all in place, but as soon as we took off the blanket, he began crying.
His short nap in the car hadn't exactly "filled his happy bucket" and throwing him into the cold was just too much for him to handle. Maxwell soon joined in the crying, his residual sickness and exhaustion joining with the cold to quickly render him inconsolable.

The photographer worked as quickly as she could to capture a few good shots of the entire family before starting in on individual sibling groups.
I watched as my siblings' children behaved perfectly and ours continued to cry, the irony not lost on me.
Hadn't I JUST told Sam how frustrated I was with always being the one to cause problems?
And here we were, yet again, ruining things.

We tried valiantly to make Maxwell happy, but despite the toy cars clutched in his hands, he would not stop crying. After about 2 minutes we gave it up and walked into my sister's house with defeat.

When we got the pictures back, it was just as I feared--not a single picture of our family had turned out: 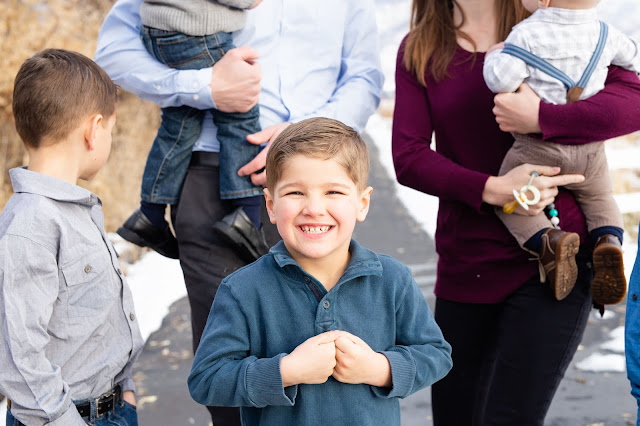 This one is pretty cute, though. Lincoln has the best big grins. 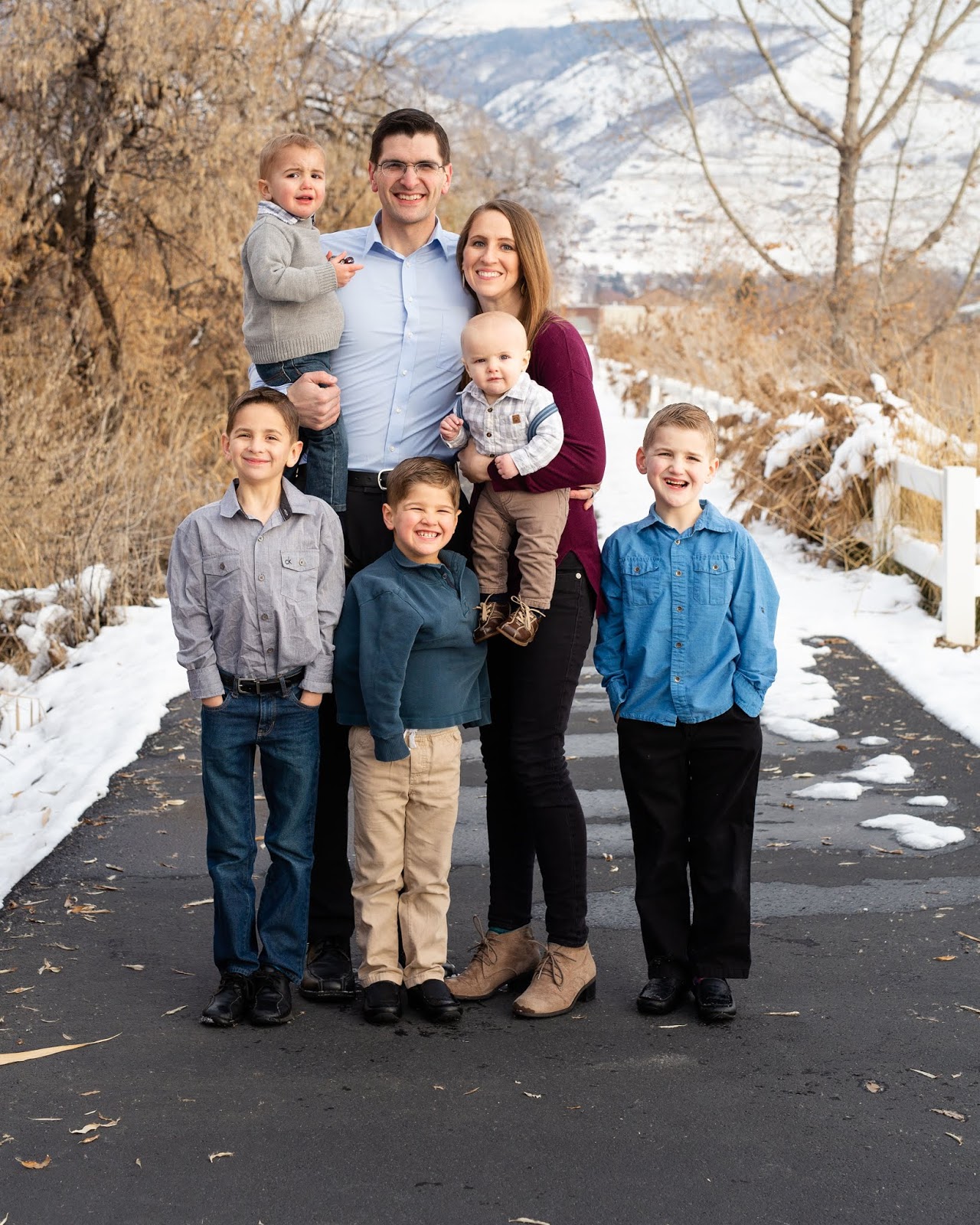 We were close on this one! Too bad Lincoln realized he would be much warmer if he tucked his arms inside his sweater for warmth. 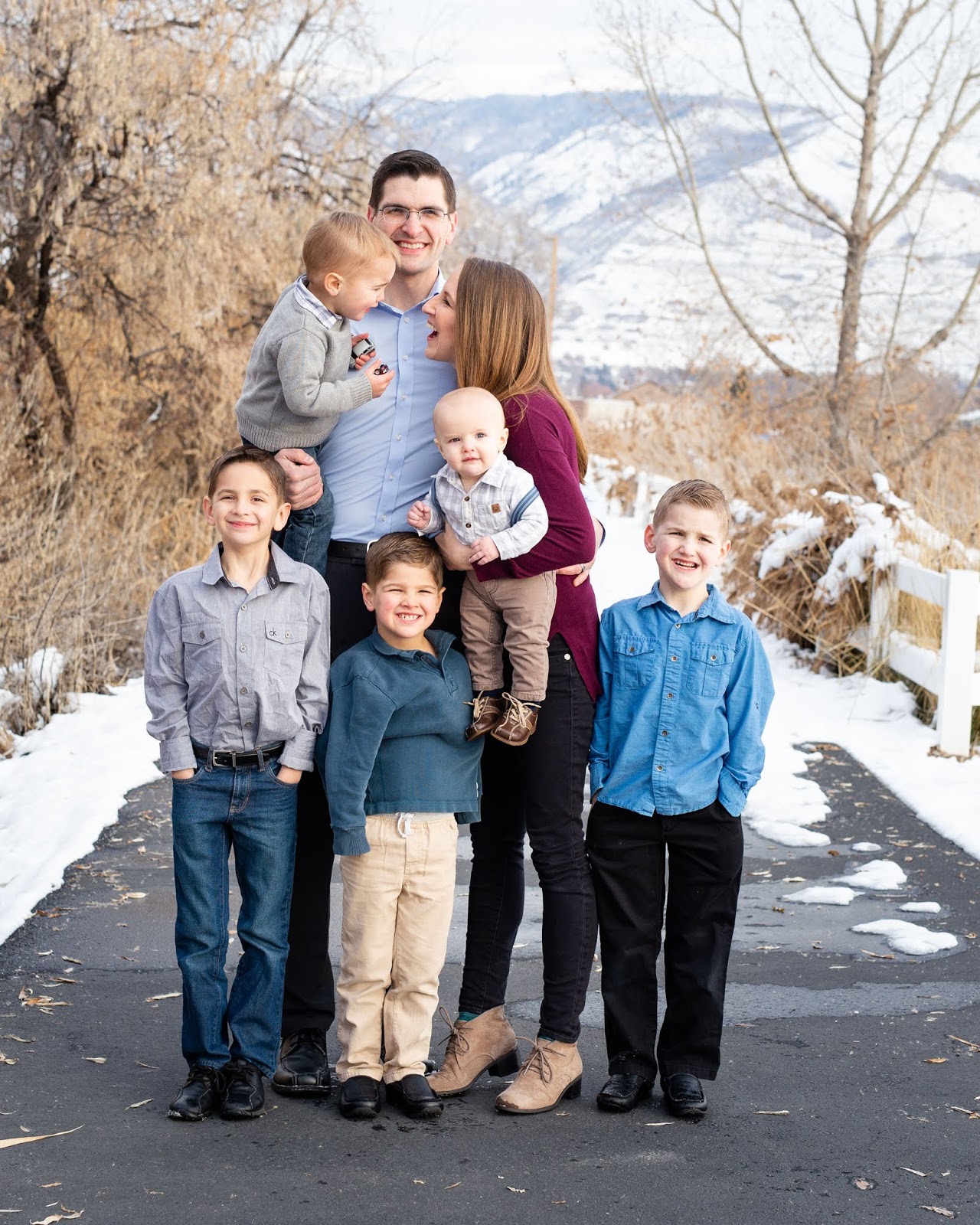 And this one pretty much sums up the role of a mom, don't you think?? The huge grin on my face as I try to stop Maxwell's crying cracks me up. Fake it 'til you make it, right? 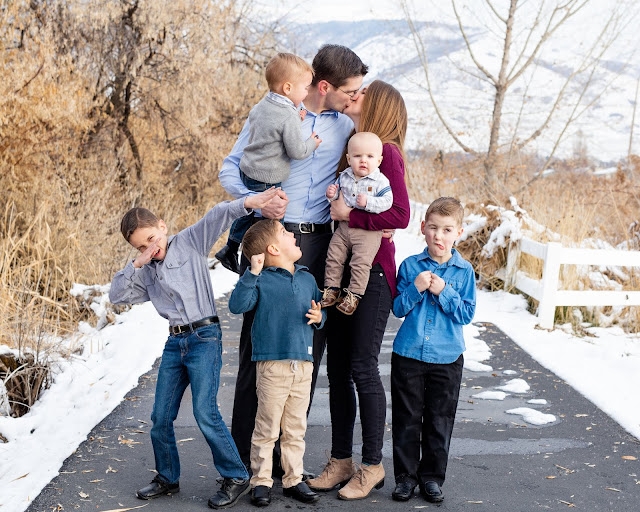 Finally I asked the photographer if we could just do a more candid style and huddle together for warmth. She agreed, (and someone realized Lincoln's arms needed to poke into his sleeves!) but for some reason told Sam and I to kiss. I wasn't shooting for quite that candid for my mom to put on her wall! Little did she know how much Sam dislikes PDA... 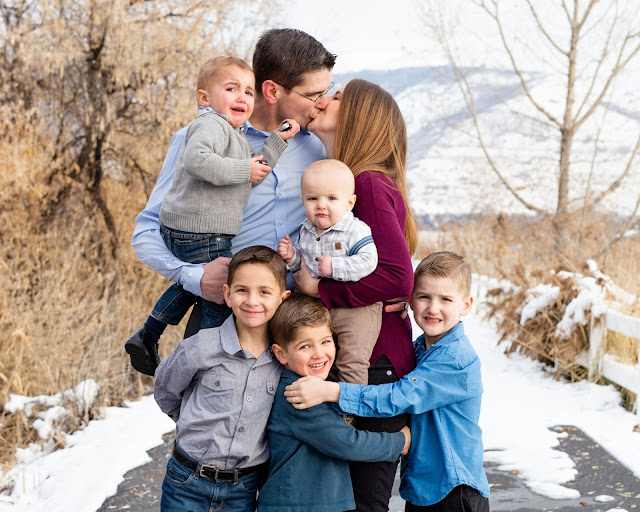 Maxwell was clearly DONE at this point, and no amount of kissing from Sam and I was going to negate his tantrum, so we called it quits. 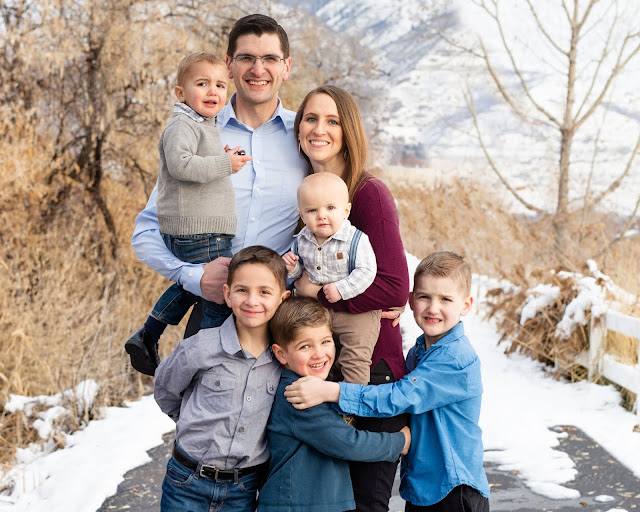 Everyone else's pictures turned out beautifully and my mom was disappointed that our family's picture on the wall wouldn't match the others, so I mustered up my best photoshop abilities and cobbled this version together. There's nothing to be done about Maxwell's mad face and toy cars, Benson's goofy-eyed grimace, or Wesley's missing belt, but it's our family and we love it, chaos and all! 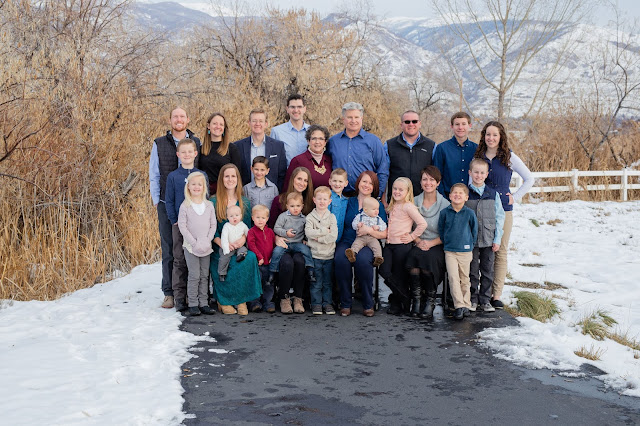 And somehow all these wonderful people tolerate our craziness. Maybe someday we'll contribute more.
But in the meantime, thanks for your patience, y'all.
Posted by Kaitlyn at 11:30 PM