Ode to the Bus

Utah has pretty great public transportation options.
In an effort to save money during grad school/postdoc, we decided to have just one car.
And in Utah, that was only slightly inconvenient.
The bus and train both stopped just a short distance from our home and dropped Sam off right by his lab. Both came at many times throughout the day so if Sam needed to change his commute time it wasn't a big deal. They were well kept up and reliable and the ride was quiet, filled mainly with business people headed to work.
After those lovely three years, Sam determined that he never again wanted to consistently drive to work. The public transportation option was kind to the environment and gave him a chance to read his scriptures or do additional work and he never had to have the stress of traffic.

So he was determined to make the bus system work when we moved to Memphis, despite many reports that it was unsafe, unreliable, and run-down.
I admit, I wasn't the most supportive about that decision upon our arrival.
I was really concerned about his safety and skeptical that it would be a reliable transportation option.
But I gradually got used to the idea and these days I don't think much of it...
until the bus doesn't show up,
or Sam comes home with an unknown substance soaked into his pants,
or I hear about a sketchy incident that took place.

The other day, Sam was waiting for the bus in frigid conditions with that characteristic Memphis bite in the air that instantly cuts through all clothing and pierces you to your core.
And of course, the bus wasn't coming.
He waited and waited in the freezing air until he finally called me to see if I could take him to work.
I was on my way to pick him up when the bus showed up, so I returned home.
Shortly afterward, I got a rather amusing text message from Sam.
(sing to the tune of "You Raise Me Up") 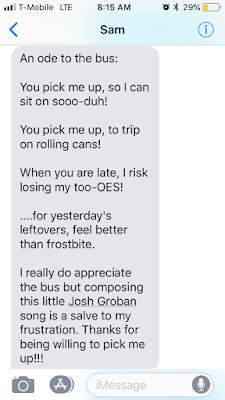 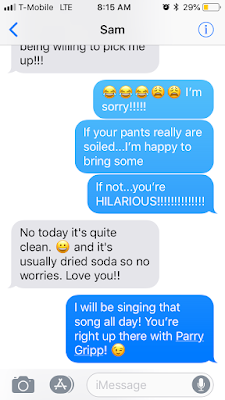 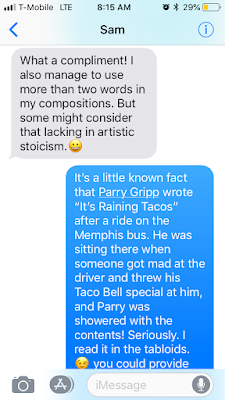 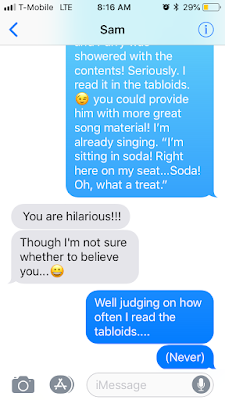 Have you heard of Parry Gripp?
He's the entertainment sensation loved throughout the world by little boys.
And, apparently I have the sense of humor of a 7-year-old, because I think the songs are hilarious, too.
This is the one I referenced--enjoy!
(Warning: It may or may not be stuck in your head for the rest of your mortal existence if you watch. Speaking from personal experience here.)
Posted by Kaitlyn at 7:20 AM