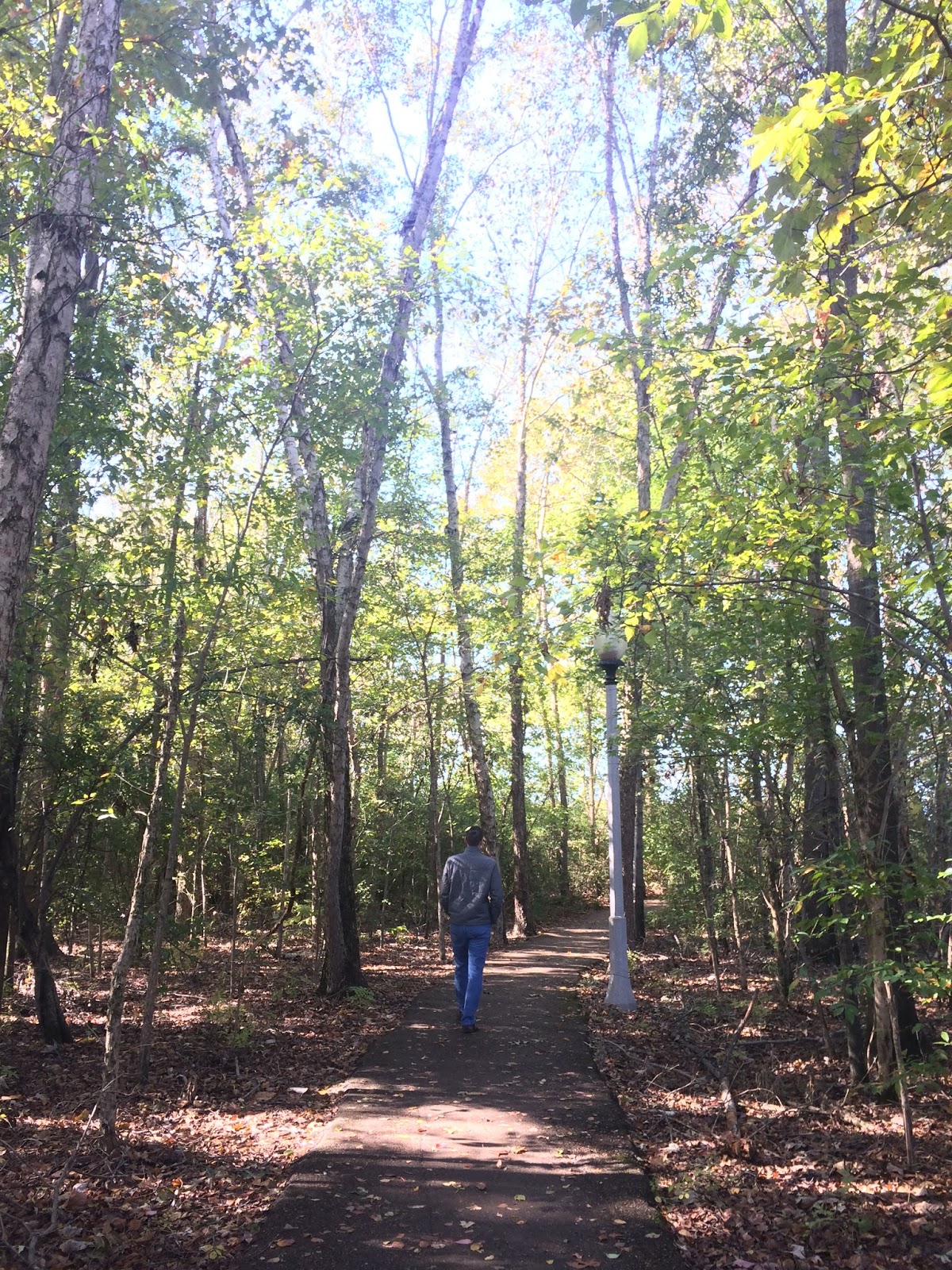 Well, here we are.
I'm breaking my 2-month silence on this blog from our new home in Tennessee.

The week before Thanksgiving, we loaded up our moving truck and the movers took it away
while we stayed with my parents for the week before our move.
(Also of note: chasing down the truck to do a ridiculous dive through boxes to find a needed document. I'm pretty sure my crazy flexibility was intended solely for that purpose, but we emerged victorious!)
Sam finished his job in Utah on Friday, flew to Memphis to begin work the Saturday before Thanksgiving, worked Monday-Wednesday there, flew into Utah on Thanksgiving morning, enjoyed a quick Thanksgiving dinner with my family, and then we piled into the car to begin our 3-day journey.

We arrived at our hotels after midnight both days,
Maxwell transformed into a wild, hilarious monkey who pranced around the bed in the dark while giggling hysterically and then would feign sleep until he would suddenly throw his arms onto me, dig his little fingers into my neck, and yell, "Tickle, tickle, tickle!" as we tried to get everyone to sleep.
Lincoln threw up in the middle of nowhere in southern Utah, many miles from any kind of civilization...thank goodness for baby wipes!
We passed The Big Texan Steak Ranch in Amarillo on Friday night--home of the free 72 oz. steak! (Only in Texas would you have an eating challenge featuring a whopping 4 1/2 lb. steak and all the fixin's!)
The older boys stayed relatively content thanks to Liberty's Kids and The Complete Series of The Magic School Bus while munching on fruit leather, granola bars, goldfish, and applesauce. Maxwell was a different story but I tried my hardest to keep his crying to a minimum!

At last, around 6:00 on Saturday evening, we pulled up to our new home.
And believe me, "Your destination is on the right," never sounded so good.
We opted to stay in our house rather than a hotel, although our belongings wouldn't arrive until Monday, and the kids were BEYOND thrilled to spend the next hour running insanely through the empty house. There is something about a big, empty space that just delights my boys and they thought it was the greatest.
Since then we've been settling in, celebrating the Christmas season, making lots of new friends, and getting to know this land of Tennessee. I'll be doing lots of updating on this little blog in coming days,
but in the meantime here are a few highlights! 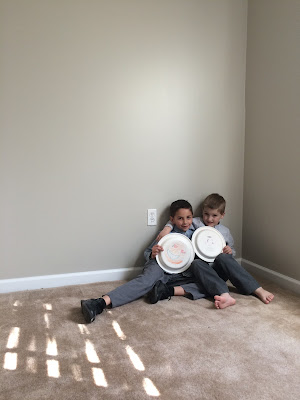 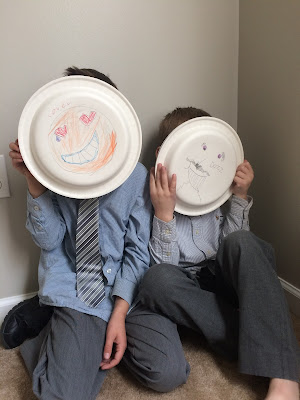 1-Kids Are Innovators-I was rather trepidatious about spending a day and a half in our house with nothing but what we brought in our car, camping out on the floor, but I needn't have worried; the kids viewed it as a grand adventure! On Sunday after Church, we got Maxwell and Lincoln settled down for naps and I came out to find Wesley and Talmage making lots of "emoji masks" out of paper plates and colored pencils. Kids are the best innovators and entertainers!

2-Hilarious Movers-St. Jude covered the cost of transporting our belongings and having a company come unload them, which was pretty convenient. Sam was at work when they came, so I stood on the driveway and directed the movers on where to put things for several hours while the boys were troopers, being banished to the backyard. The movers made many amusing comments to me--like when they unloaded our large barrel for water storage and one said, "You guys make your own beer??" Or when they were watching me with Maxwell and one said, "I gotta stop lookin' at him...he's gonna make me baby hungry!" Or when the sound system in the house glitched and randomly turned on and began blasting Jenny Phillips Christmas Music and a mover came out of the house singing, "Hallelujah! You've got some GOSPEL music goin' in there! You're gonna put us all to sleep!" Or when one commented that they were nearly done and they would be "finished by Miller time!" and then said that he prefers Bud Light-I responded by saying, "Well, we don't even drink beer so I just don't know!" "No?? You guys wine people??" he replied. "No, we don't even drink alcohol!" I continued with a laugh. "Well, that's good! You don't ever start...don't ever start!" he advised me.

3-Brrrr!!!-I knew Memphis wouldn't be as warm as Houston, but I definitely was not prepared for the cold, cold weather we've had over the past couple of weeks. The cold feels so much different than Utah cold...I know people attribute it to the humidity, but really, when it's in the 30s here it feels like single-digit temperatures in Utah. It is a cold that immediately seeps into your bones and freezes you on the inside. Even Sam, who usually wears shorts through the winter, has been struggling-and 12-foot ceilings and hardwood/tile floors don't help matters any. We've both been wearing winter coats inside, bundling up with blankets, blasting the space heater, and dreading anything that takes us outside.

4-Yes, Ma'am-The schools here have required a bit of an adjustment--more for me than for the kids. Not only is it full-day Kindergarten here (Utah was half-day) and there is one recess (compared the three they used to have), but they are SUPER strict about just about everything, from how to drop kids off at school to bus rules (no talking on the bus until the bus driver raises her hand after a few minutes!) to locking all school doors and requiring visitors to ring a special doorbell to enter the building which will take them directly into the office. One morning I came in the front door with the boys to help them carry about $70 of school supplies down to their classrooms and was told I wasn't allowed to go back to the classrooms with them. So I loaded them up and they had to do their best to carry many bags down the hall with all their usual gear! It can be a little frustrating sometimes, but I can see that academically they are being pushed harder and once I got used to all the rules, I've been really pleased with their school. One of the results of their strict school is that now our kids have taken to replying, "Yes, Sir," and "Yes, Ma'am," to Sam and I. I think it's the cutest little Southern thing.

5-We Live in the Woods-This area is set up in such a unique way. There are clumps of shopping areas and neighborhoods spread out, but then in between the developed areas it has been left wild, and in Tennessee that means huge masses of towering trees. That means we get to see all kinds of wildlife on a regular basis! I nearly hit a group of deer on my way home from Kroger one night, we love watching the squirrels play in our backyard, and watching a little bunny hop across the road in front of me was the cutest thing. We've also seen raccoons, possums, blue jays, cardinals, and even a bald eagle.

Finally, I asked the kids to each share something about Tennessee.
Here are their responses:
Talmage: "There is a lot of diversity here and barely any snow."
Wesley: "It's really green."
Lincoln: "We have neighbors and people keep giving us treats!"
Posted by Kaitlyn at 11:56 AM