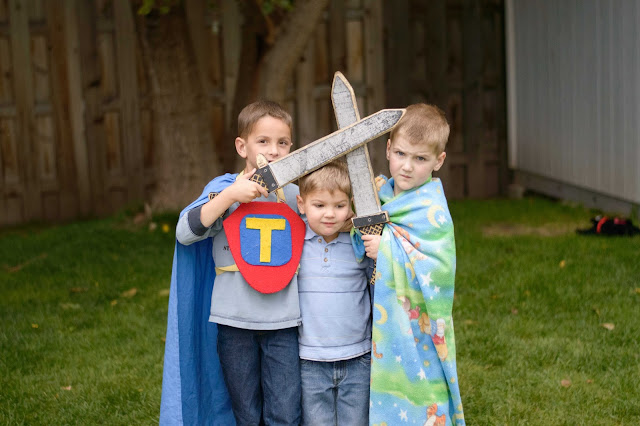 Lately the boys have been best "frenemies."
They want to be together, but they have been fighting almost constantly!
The other day I was in the bathroom and I heard a dispute break out over some item.
I then heard one boy say sweetly to the other, "Close your eyes and come over here close to me!"
I expected him to give the toy to his brother, as this would be in keeping with their typical relationship.
Instead, he punched his unsuspecting brother.
The third brother witnessed it all and gasped with shock before coming upstairs to report that his brother had "done a very bad thing!"
It was the first episode of a long day filled with similar disputes.
Sam and I were ready to pull our hair out by the end.
And yet, when as a consequence for their misbehavior they have to spend time apart, they are devastated!

At times like this, I love to remind myself of C.S. Lewis' "law of undulation."
The boys go through phases where things are unbelievably harmonious and they are so eager to serve each other,
and they go through rough stretches as well.

Today was probably the best, happiest day in several weeks.
Talmage ran out the door to catch the bus with the plea to "do a fun activity with Wesley and Lincoln so they can tell me about it when I get home!" instead of feeling jealous.
Wesley and Lincoln played happily together all morning before our simple "school time," lunch, and naps.
When Talmage came home, the three of them played "Don't Eat Pete" together while I taught piano lessons
and then pushed our giant LoveSac over to the bottom of the stairs to fling themselves into repeatedly.
They dressed in an amusing array of costumes, Wesley sporting a blanket cape, and paraded around in the crisp autumn air outside, happily sword fighting and discussing their fictional names,
and then they came in and spent half an hour immersed in library books together.
After dinner and family scripture study, they worked together to clean up
and then when Lincoln had an awful mishap in the shower, leaving him with a huge goose egg on his cheek,
Talmage and Wesley each said prayers of their own accord that he would feel better.
I tucked three happy boys in under many layers of blankets to keep them cozy in this chilly October weather,
and then, by lamplight, I read aloud from our latest chapter book about a dragon.

It was so nice to enjoy a happy day together once again.
Here's hoping we're emerging from this rough period of conflict!
I sure do love the relationship these boys have with each other. 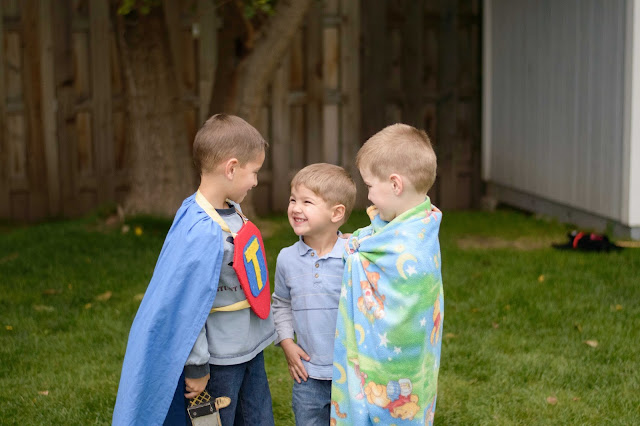