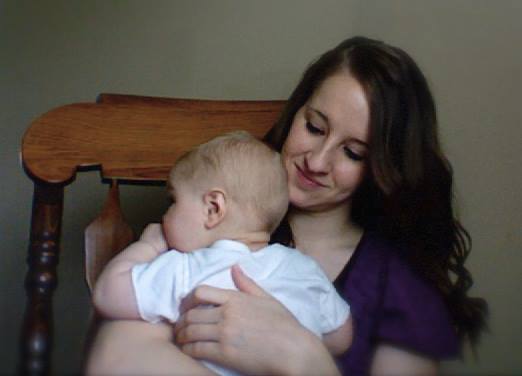 And as I talked with him and considered his innocent question,
I thought about how perhaps the world would agree.
I have become nothing.
I held my first babe in my arms when I was barely 20 years old.
I didn't attend graduate school after receiving my bachelor's degree,
I haven't traveled all over the world,
I haven't done humanitarian work in orphanages.
My body was changed by the marks of pregnancy and childbirth almost before it had even fully matured,
and I'm spending my decade of supposed "peak physical well-being"
either pregnant, or nursing, or covering up bags under my eyes, or some combination of the above.

But I know something more.

I know I am doing God's work--the greatest work I possibly could right now.
And I willingly, and even gladly, give up worldly honor because of the understanding I have of this truth.
It is a tremendous privilege to exchange the applause of the world for games of pat-a-cake,
to give up certificates of achievement in exchange for crayon drawings on the fridge,
and to trade a perfectly polished appearance for a nurturing one.

And each little sticky-fingered, drooling, tantrum-throwing son that we've welcomed into our home
has changed me
and refined me
and helped me become so much more than I'd otherwise be.

How grateful I am for the perspective the Gospel of Jesus Christ has given me as a mother
and the opportunity to share that perspective and testimony with my children
and the framework of life that is God's Plan.

"When God wants a great work done in the world or a great wrong righted, he goes about it in a very unusual way. He doesn't stir up his earthquakes or send forth his thunderbolts. Instead, he has a helpless baby born, perhaps in a simple home and of some obscure mother. And then God puts the idea into the mother's heart, and she puts it into the baby's mind. And then God waits. The greatest forces in the world are not the earthquakes and the thunderbolts. The greatest forces in the world are babies."
-E. T. Sullivan, as quoted by Gordon B. Hinckley
Posted by Kaitlyn at 2:18 PM