It was early spring when we determined we would be moving to Houston for Sam to attend graduate school at UT-Houston/MD Anderson Cancer Center. The hours we spent perusing apartments on-line were somewhat discouraging. Our rent would double, and it was so hard to select something without seeing it in person! Houston, especially around the Medical Center, is a bit of a checkerboard of safe and not-so-safe areas, and ultimately we decided we would play it safe and live in a suburb just south of Houston called Pearland, about a 25 minute drive from the Medical Center. We eventually settled on a 2-bedroom apartment at Westlake Residential, a rather large apartment complex in the heart of Pearland.

The apartments themselves weren't too bad, and the buildings were positioned around a picturesque lake with ducks and paddle boats for residents to use (and the occasional alligator, as well!).
(Pictures from Westlake & Apartment Guide) 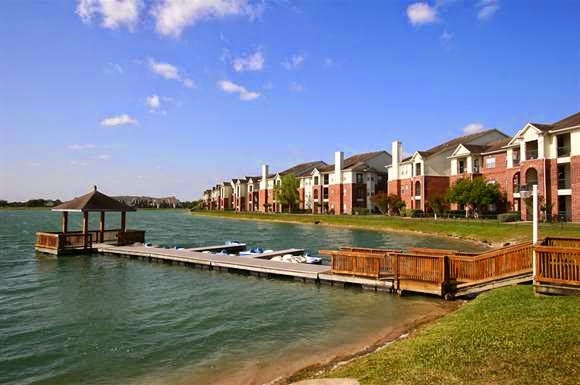 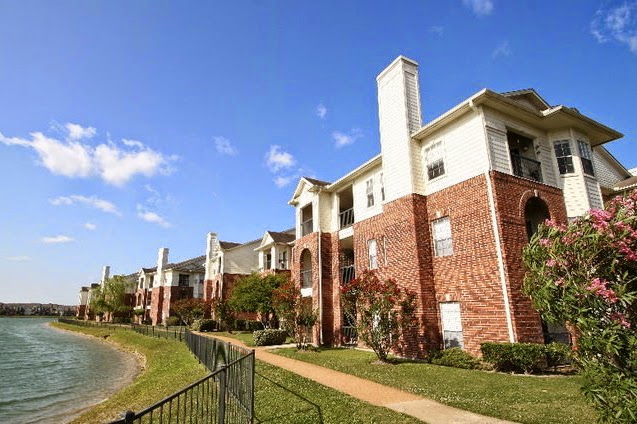 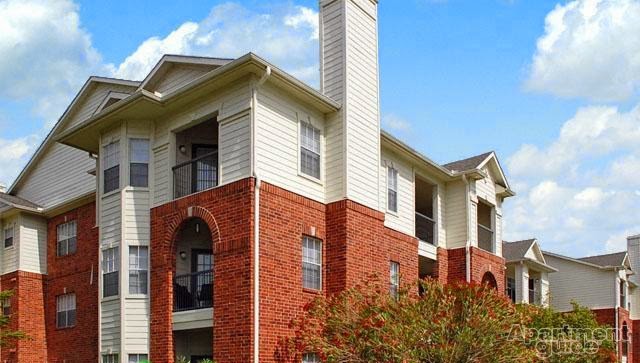 There was also a pretty nice pool with a waterfall and a hot tub that we used a time or two. 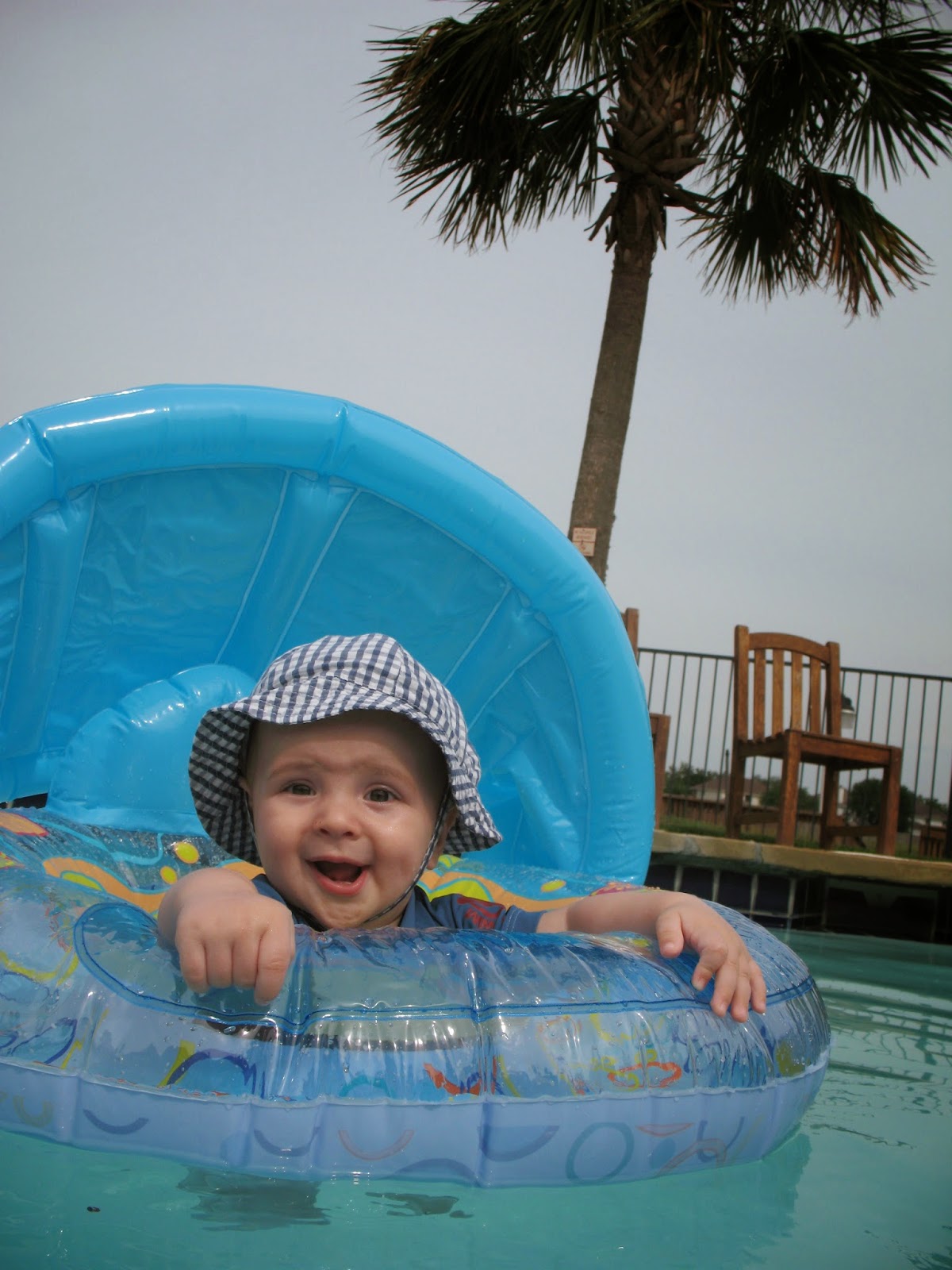 But this was by far the most difficult place for me to live.
In a matter of just a few weeks we went from both being college students, living just an hour from our families, to becoming complete strangers to everyone, having a brand-new baby, living thousands of miles away from family, and Sam being gone very long hours for graduate school.
Needless to say, it was a rather lonely year for me.
I gradually got to know ward members, but we had only one car, and unless I dropped Sam off and picked him up at the Medical Center (which would take up to 3 hours total with traffic), I was stuck home. There are very few sidewalks outside of housing developments in Pearland, and roads don't have shoulders on them, so if I wanted to go on much of a walk I had to drive somewhere first. There were a few times that I went an entire week without setting foot outside the apartment except to go to Church.
I felt uneasy about some of the events going on in apartments adjacent to us, and we frequently got waves of swearing, fighting, and cigarette smoke through the vents.

And then the cockroaches came.
Evidently we had a neighbor with cleanliness issues, and the cockroaches started as a trickle but eventually infested our apartment by the thousands. Even the exterminator admitted we had a bad problem. The roaches had come through the walls and were everywhere...especially in the kitchen. We were constantly finding roaches in our food. It took me at least a year after moving to get rid of the habit of throwing the cupboard doors open and then stepping back with horror to wait for the frenzied roaches to disappear. I'll never forget the time Sam was going to take out the trash and set the bag by the front door for a couple of minutes. When he came back to grab the bag, many of the roaches in the bag had crawled out and were all over the ceiling and walls around the door. At the peak of the infestation, there were empty egg sacs and roach feces spread throughout our cupboards, which we had to empty. We didn't eat meals we had to cook because I just couldn't bear to work in the kitchen with roaches crawling all about. One day we had something cooking in the crock pot and because cockroaches like warmth, when I opened the cupboard underneath the counter space where the crock pot was sitting, the underside of the counter was filled with a mass of nasty little roaches warming themselves. I nearly fainted!
Being alone all day, every day from the wee hours of the morning until late at night with just a little baby and thousands of roaches to keep me company nearly drove me insane. I think I shed more tears during the year we lived in this little apartment than the rest of our married years combined!

(We just took a video tour of this apartment, so pardon the candid photos--they'll give you the basic idea!)
This is a view of the front door behind Sam. The other door you see led into a bathroom which connected to Talmage's room. Directly behind Sam was the entrance to the kitchen. 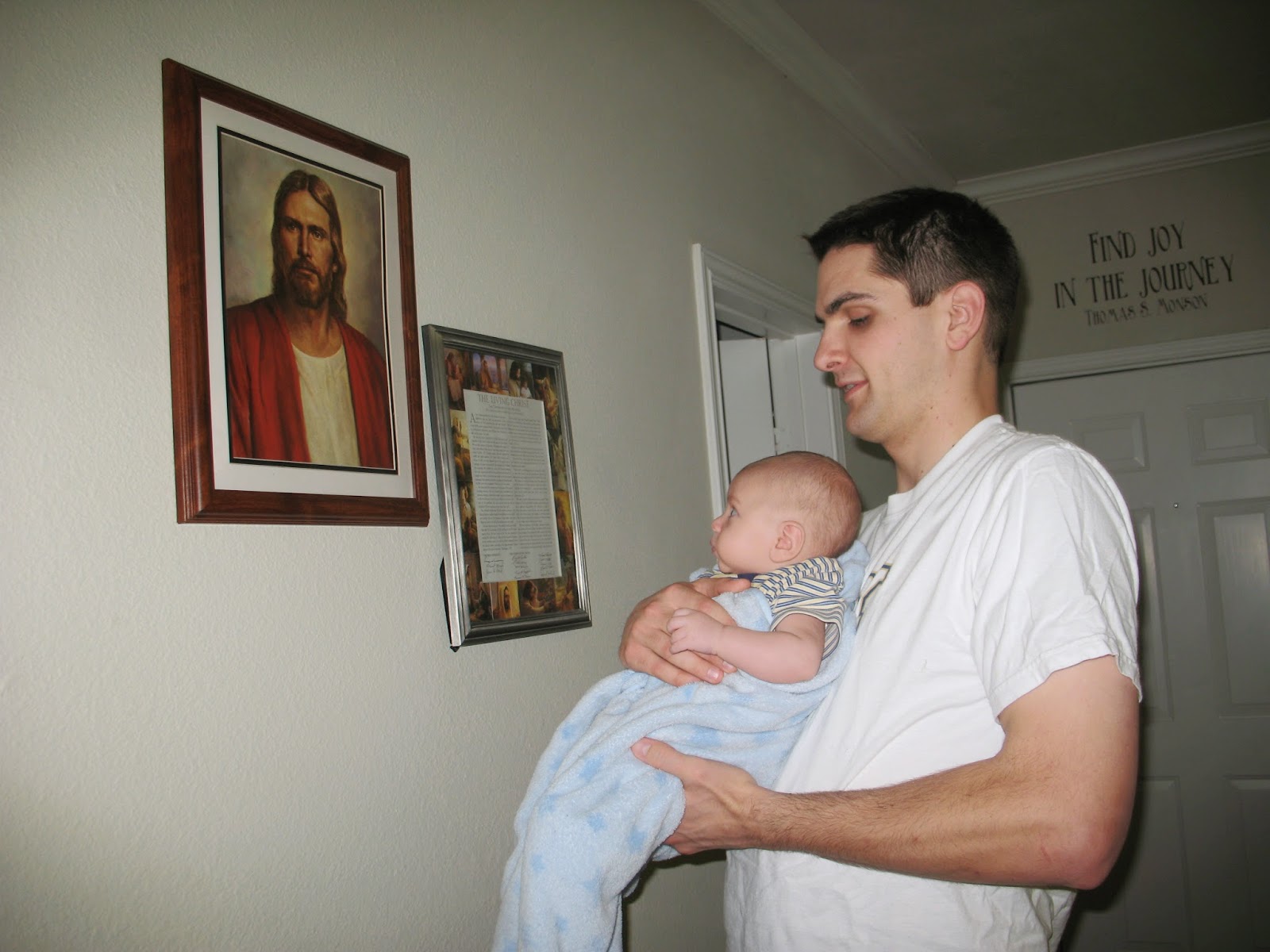 This is a view of our kitchen with a common scenario--Sam smashing a roach. 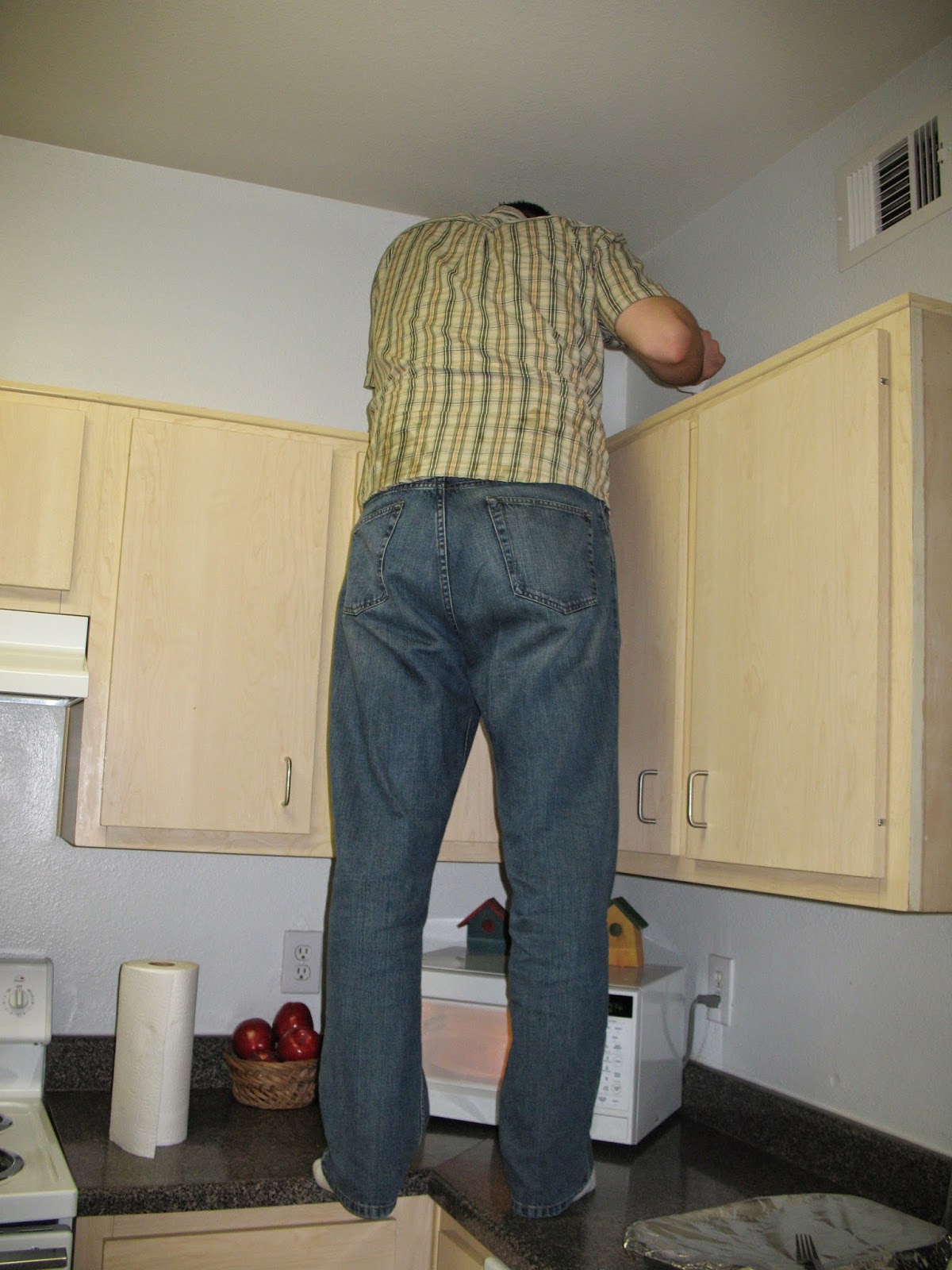 Just to the left of this picture was a closet with accordion-style doors that housed a washer and dryer, a welcome change after the hours spent in the laundromat in Provo! 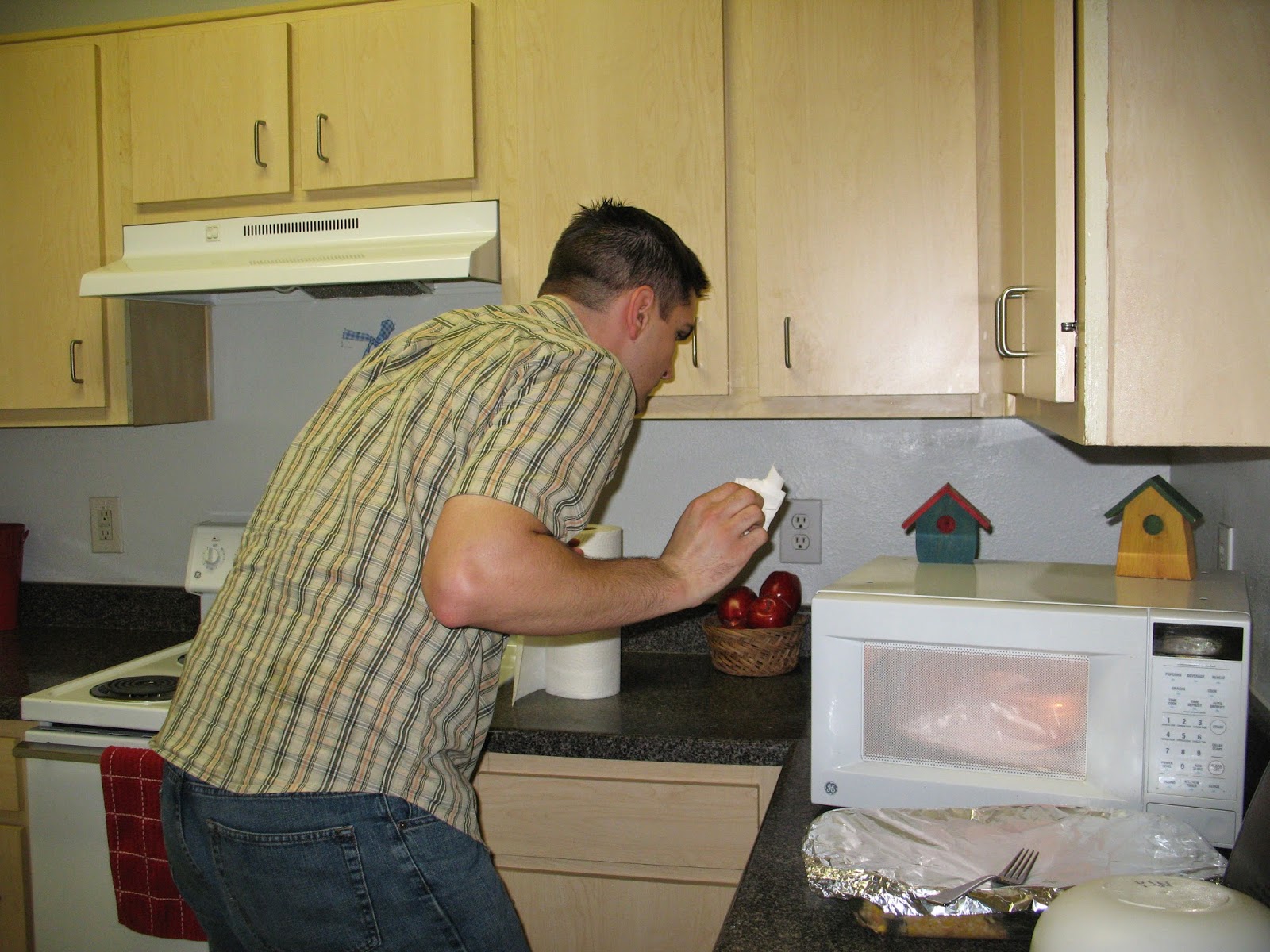 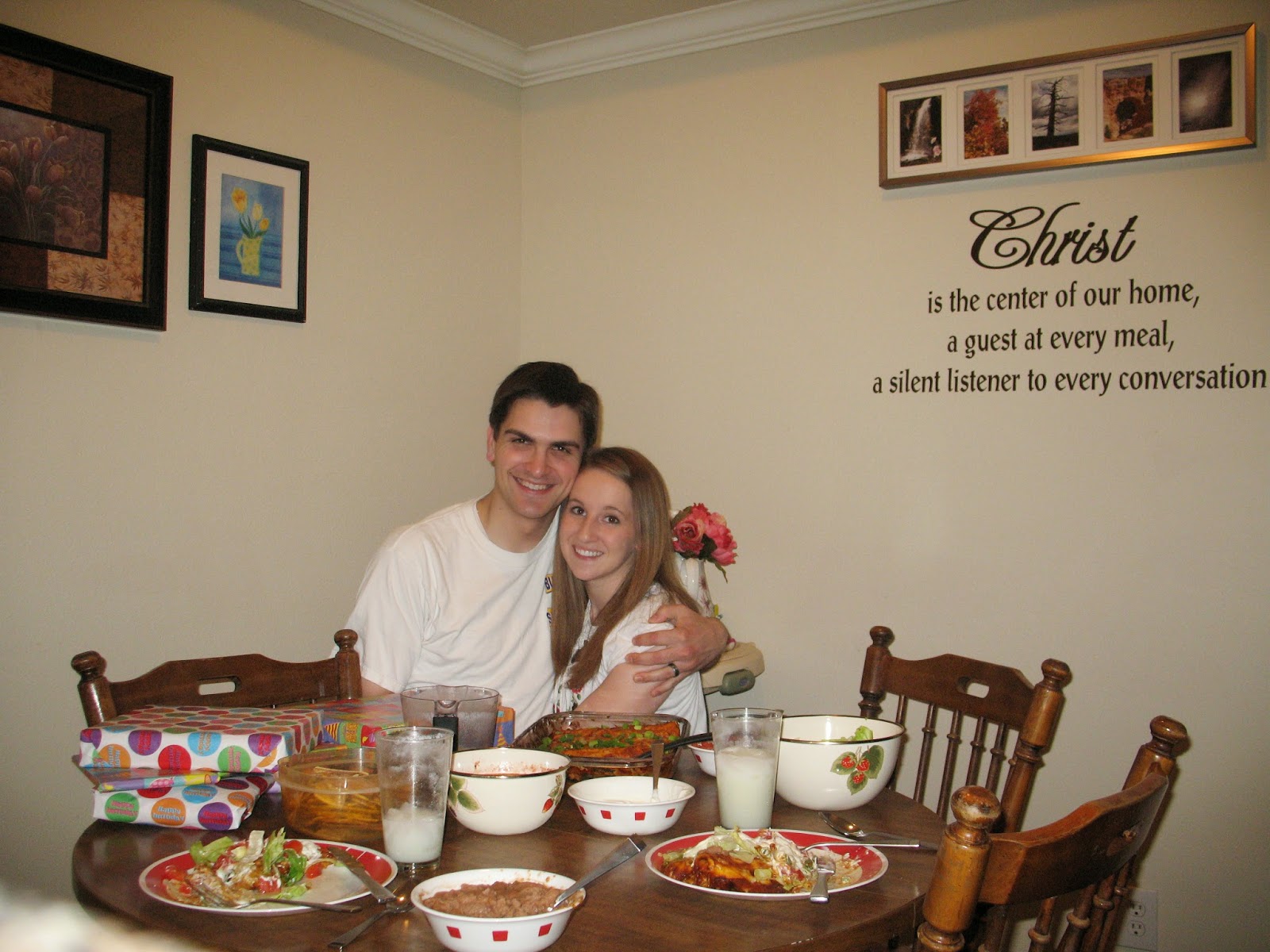 Opposite the dining room was our living room (here we were playing balloon volleyball). For the first few months we lived here, our giant LoveSac, the piano, and a rocking chair were the only pieces of furniture in our living room. It was always funny to have people over and invite them to take a seat in the LoveSac! 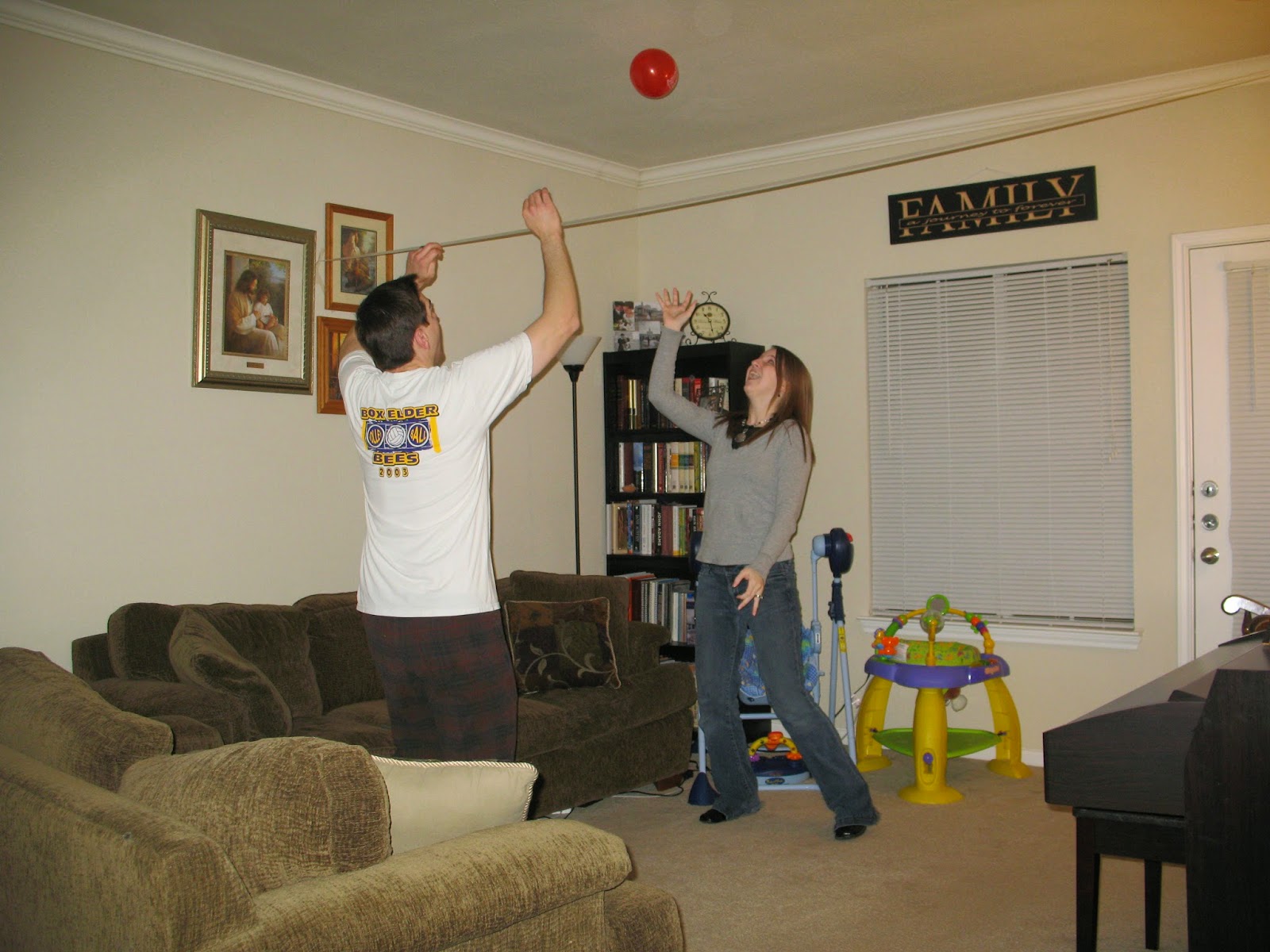 The door behind Sam led out to a covered balcony, and just to the right of this picture was the opening to Talmage's bedroom. 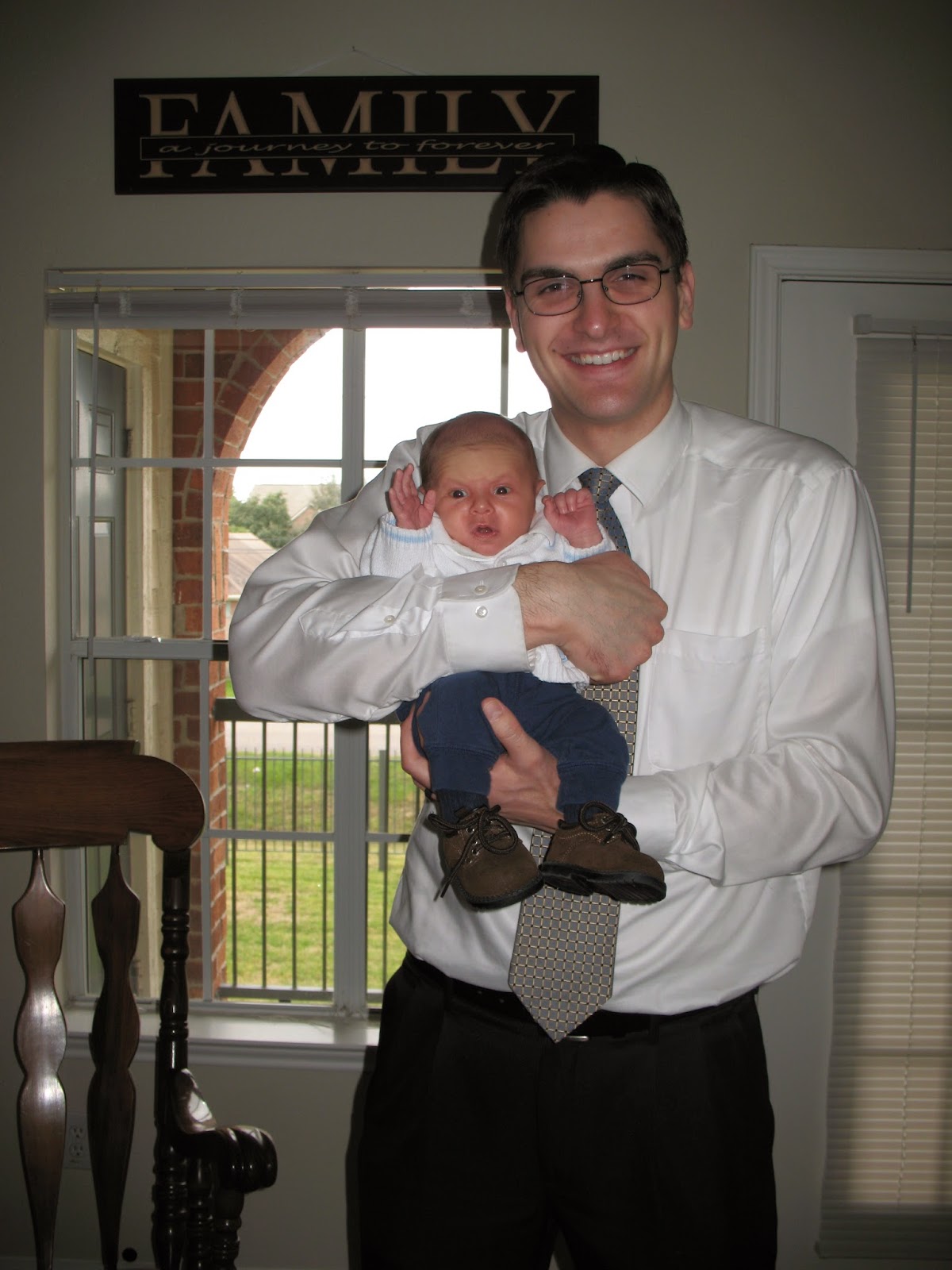 I wish I had a better picture of Talmage's bedroom! It was rather spacious with a big walk-in closet. His room had a jungle animal theme. I spent many hours here rocking and singing my baby to sleep. 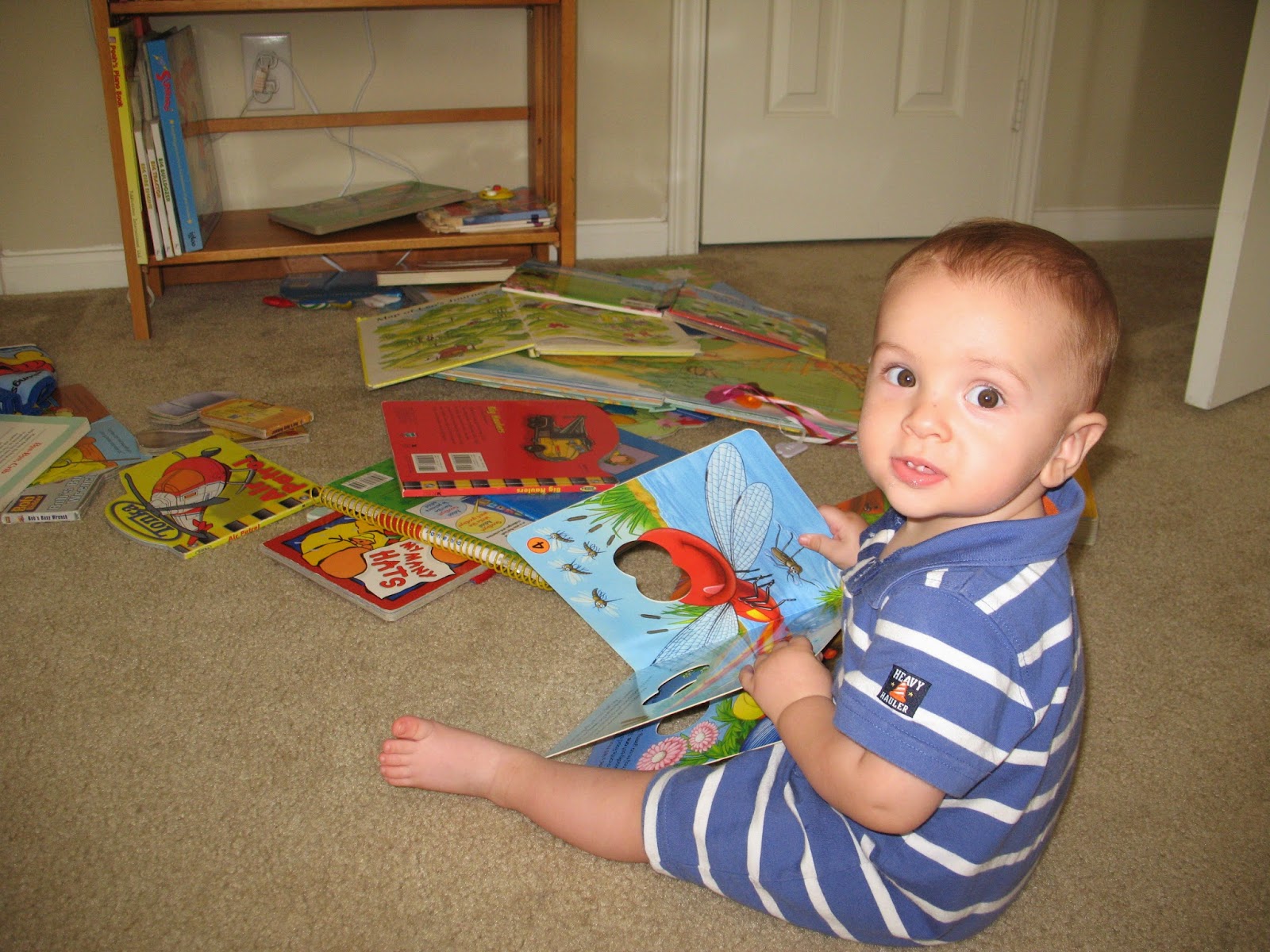 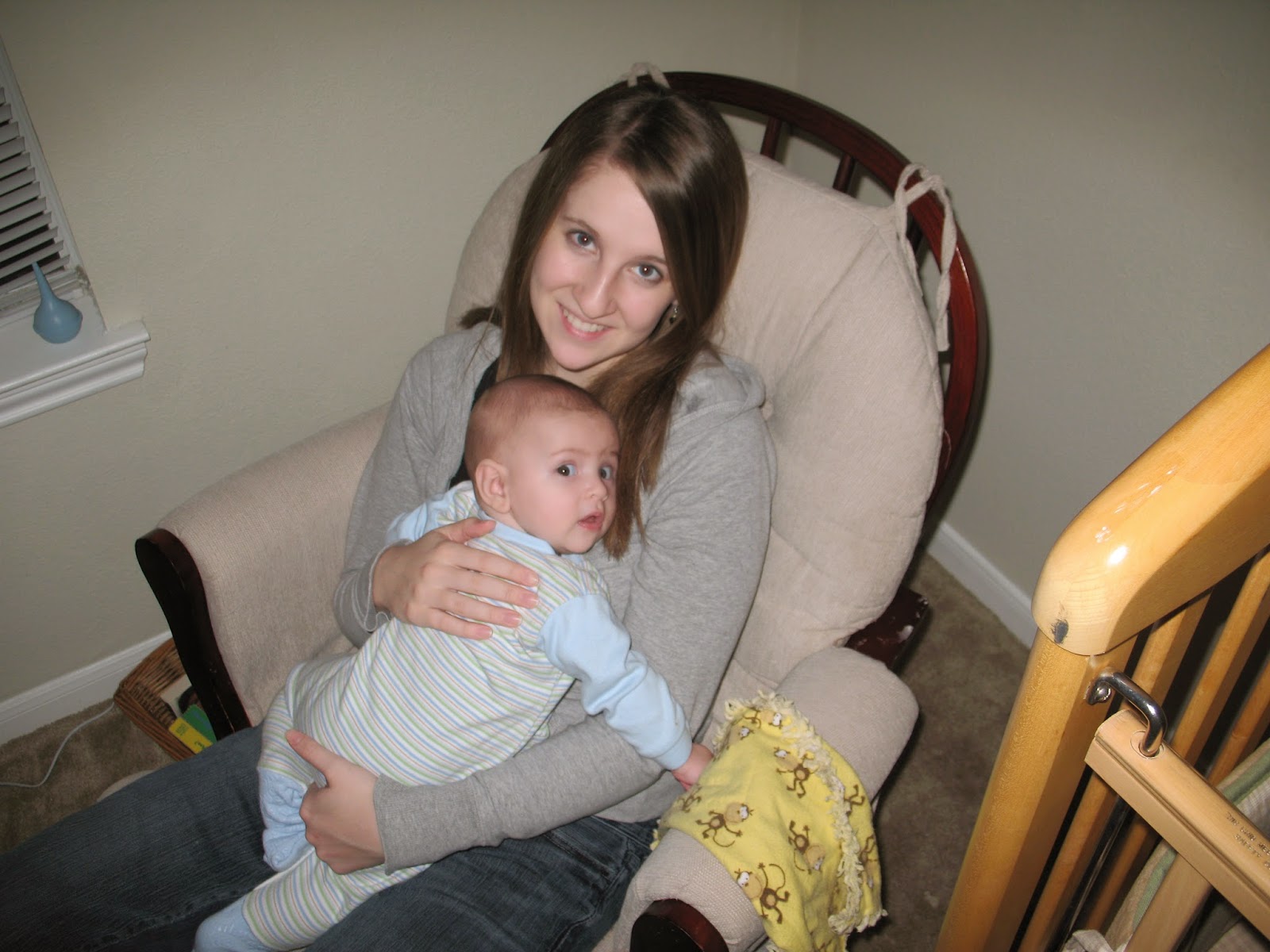 And our room was diagonally across the living room from Talmage's. It had a large attached bathroom as well as a big walk-in closet. Our apartment had so much more space than we had in Provo! 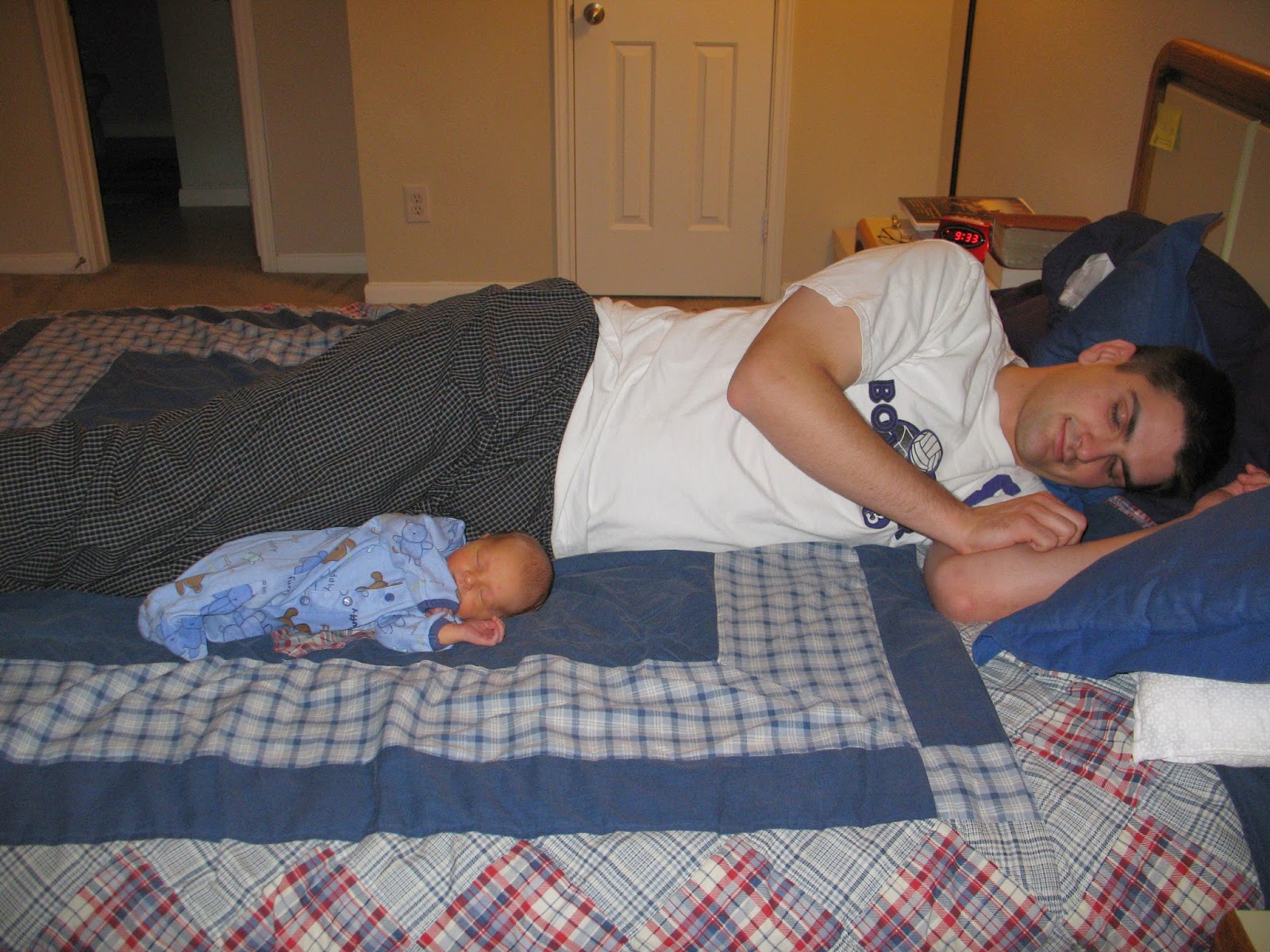 But don't get me wrong. There is much to love about this place as well. While many lonely hours were spent here, I have to remember the many hours I spent on the phone with my mom each week as she chatted with me, just to help pass the time.
I remember my kind visiting teacher who, without even knowing how alone I felt at times, would come and pick me up and take me to storytime at the library with her young daughter.
I remember another thoughtful ward member who would pick me up each week when she took her son to piano lessons. While she waited during his lesson, she would let her other children play at the park and we would sit and visit.
I remember the exquisite joy and awe we felt as we brought our newborn son to this home just 7 or 8 weeks after moving in.
I remember experiencing his firsts--his first laugh, his first taste of solid food, his first steps.
I remember visits from my mom and my sister.
I remember ice cream sculpting, water fights, game nights, and many love notes.

So while we practically ran out the door when our lease was up,
I'll always cherish many of the memories made here.
And, with the passage of time, I've come to be able to laugh at many of the others!
Posted by Kaitlyn at 12:00 AM