A Herpetologist at the Church

Right before our trip to Utah, a herpetologist came to our ward's pack meeting. Since I'm involved with Primary, I thought it was perfectly appropriate for me to take Talmage. I knew he would be thrilled! And he absolutely loved seeing all of the rattlesnakes, spiders, and numerous other critters he had there. At one point during his presentation, a crocodile came crawling out from under some chairs, where he had been hidden away! It was rather startling! They brought out the huge python at the end and let the kids touch him. 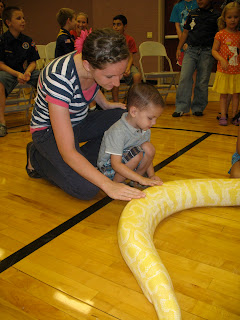 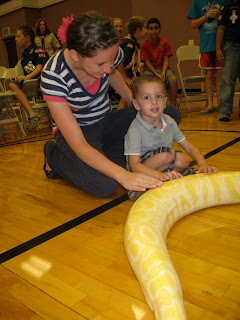 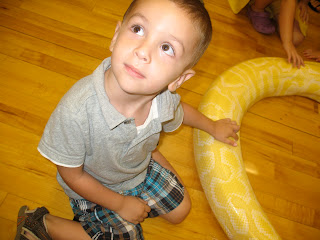 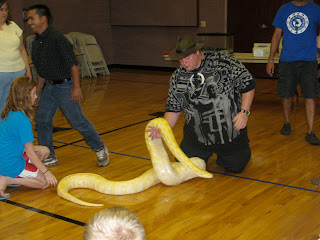 The presentation was absolutely fascinating. The man who was presenting all of the snakes and other critters (in the blue T-shirt above) said he goes in the middle of the night to catch them and just grabs them wearing his flip flops and shorts! We're talking about deadly snakes here--it was amazing to see him handle everything. The man in the center was his helper. The scouts were more than a little thrilled, as was my little future scout!
Posted by Kaitlyn at 7:43 PM