A couple of months after Wesley was born, Talmage started developing some pretty bad sleeping habits. He wakes up in the middle of the night (it used to be almost every night, but now only happens about half the time) and comes up to our room and climbs into bed with us. Sam and I are both really deep sleepers, so we usually don't even notice until we wake up in the morning. He also started having really short naps and would wake up at 5:30 or earlier (even 4:30) in the morning and not go back to sleep. So he was overtired and cranky, and between he and Wesley I was (am) pretty tired myself. His bad habits are getting resolved, but in the midst of this I discovered that if I pretended I was asleep when he would come running upstairs after his short nap, he would climb up on our bed and go back to sleep. 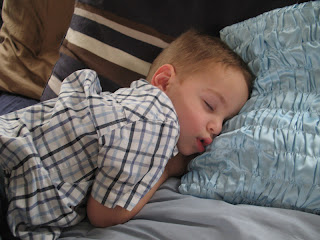 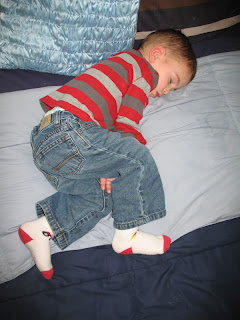 He loves helping me cook. Here he was sauteeing some onions. 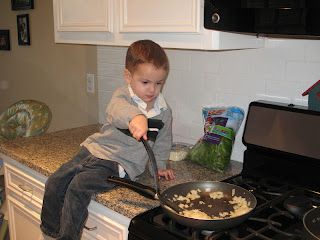 Do Not Disturb. The floor often becomes his office space. 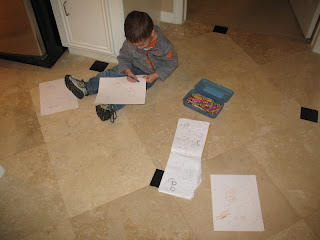 He's getting so big! 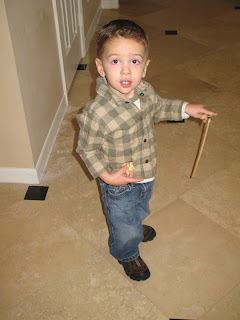 Talmage is always trying to use Wesley's toys, high chair, bouncy seat, etc. I try to convince him that he's too big for them and they are just for babies, but that didn't stop him. 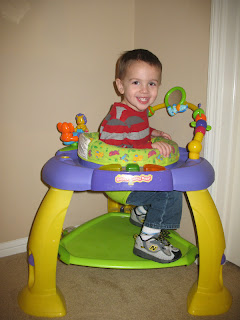 He can't get himself out of here, though, so finally one day after he climbed in I didn't get him out for 20 minutes or so even though he wanted to get out, and he hasn't gotten in since. 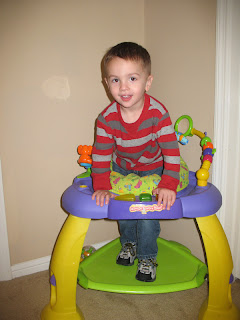 He occasionally watches an episode of Mr. Rogers online. There are 26 full-length episodes you can find on pbs! 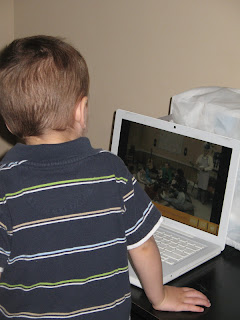 I was making sweet potato fries, and Talmage decided to eat one before they were cooked. Even though his face looks less than thrilled, he actually ate the whole thing and wanted more. I guess our picky eater likes raw sweet potatoes! 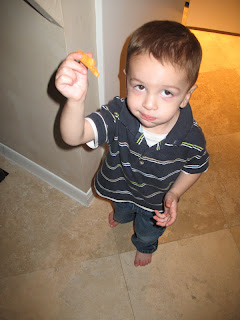 I love this little boy. Sometimes I feel really guilty that Wesley isn't getting the one-on-one time I was able to give Talmage and I start to worry a little bit about it. But then I realize there are pros and cons to each position in the family. Wesley may not be getting as much undivided attention, but we are learning a lot about parenthood from Talmage that will make Wesley's life easier as he grows. Talmage gives us a run for our money often, especially in the area of discipline, but we are slowly learning what is effective with him and how to show discipline with love. We are so grateful to have him in our family, two-year-old antics and all.
Posted by Kaitlyn at 8:36 PM