The last 3 1/2 weeks have definitely been an adjustment for Talmage, but overall I think he's done pretty well. He has plenty of moments when he beats up on Wesley for seemingly no reason, but when my patience is wearing thin I reflect on the sweet moments we have experienced with the two of them.

Wesley was just 5 days old here. I lay him on a blanket, and Talmage rushed over to lay beside him and show him the wonders of tractors. 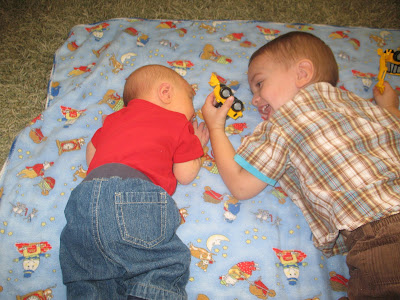 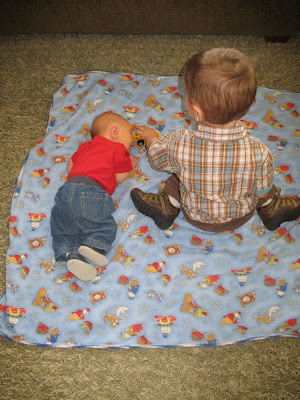 He also started using Wesley as a road to drive his tractors on... 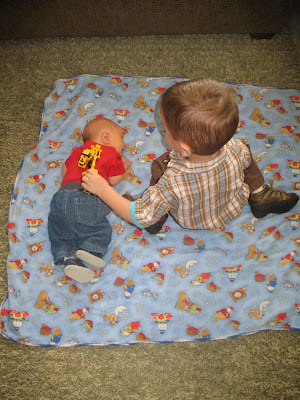 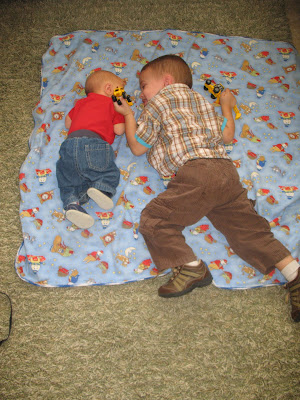 And then he insisted on touching his forehead to his. I didn't realize it would turn into head-banging about 5 seconds after this picture was taken. 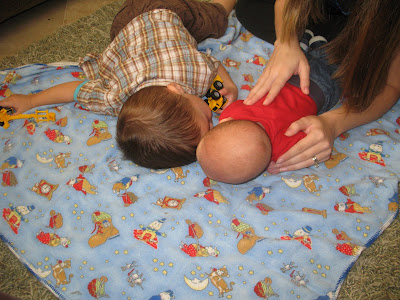 This was Halloween, so Wesley was 9 days old, sitting contentedly on the couch... 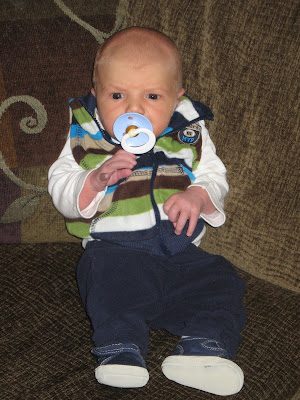 and along came his adoring (and adored) big brother. 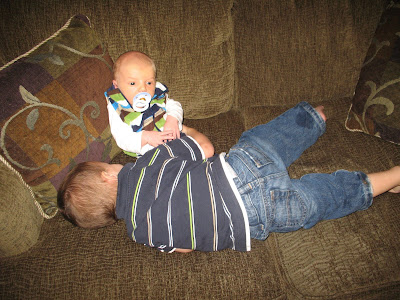 The binky is where we probably run into the most trouble. Wesley is overly tolerant to all of Talmage's attention. Even when the attention gets a bit rough and Wesley ends up with a scratch or something, he seldom even makes a peep about it. But he doesn't like it when Talmage tries to shove his binky into his mouth. I love Talmage's open mouth. 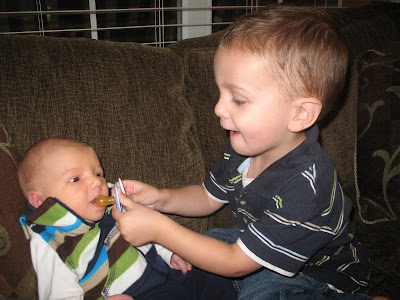 Here he is reading him a book--actually, showing him the pages with trucks on them. That boy is obsessed with anything with wheels! 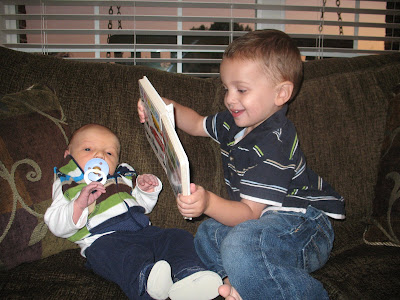 Wesley was sleeping and started stirring and fussing a little bit. Talmage instantly ran over, stuck his hand through the bars of his cradle, and began stroking his cheek to soothe him. It actually worked, and Wesley fell asleep again! It was a very tender sight. 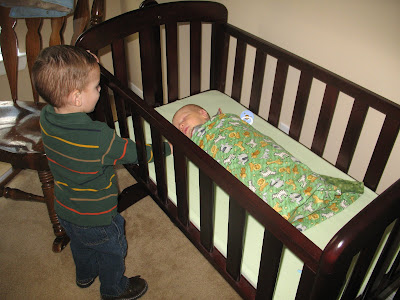 This was a particularly rough day. Talmage seemed to be beating up on Wesley every time I turned around and both boys were having a hard time. I was feeling a little bit overwhelmed when Talmage came up to Wesley and started giving him loving attention. 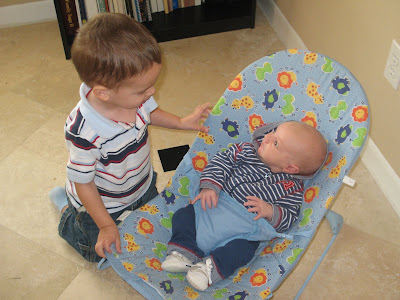 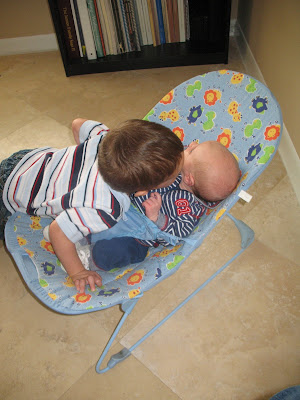 And then Talmage went and got the Nursery manual... 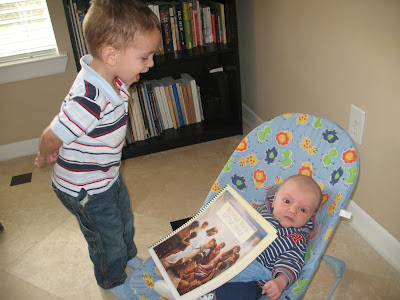 ...opened it up, and started showing Wesley pictures of Jesus and saying in the most adorable little baby voice, "See? Jesus came! See? He's happy. See? See? Jesus came!" It was so sweet and a huge comfort to their stressed mom. 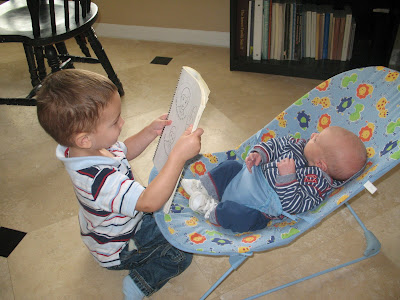 Talmage always has to be involved in what Wesley is doing. 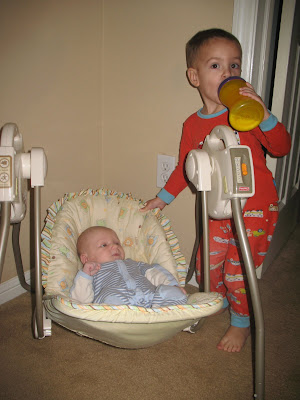 We have a little mirror hanging on the backseat of the car so I can look in the rearview mirror and see if Wesley is okay. About 9 times out of 10 when we're in the car this is what I see: 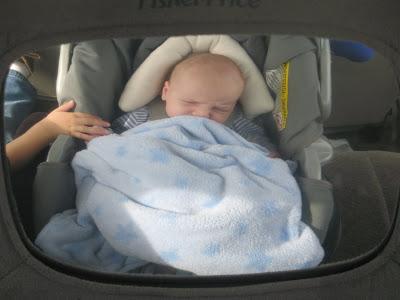 Talmage insists on holding Wesley's hand wherever we drive. Thankfully he has learned pretty well to not turn his hand-holding into an iron-grip squeeze like he used to do.

I'm starting a tradition where I do a video interview of our kids on each of their birthdays, asking them about current favorites and other relevant things. I did Talmage's a bit late, so Wesley was already a week or two old, and when I asked him who his best friend was he replied, "Wesley." :) He still answers that way when I ask him.

Talmage has also had to learn that he can't give Wesley big-people food. I have caught him several times trying to feed Wesley. Once he walked oh-so-carefully across the kitchen with a spoonful of yogurt to share with him, so delighted that he was sharing. I have had to explain numerous times that Wesley can only have "baby-milk." It is sweet to see him trying to share with him regardless.

One thing I've found helps immensely is to make sure I spend some time each day doing something 100% focused on Talmage. Even if it is just reading stories while Wesley sits in his bouncy seat so I can cuddle up with Talmage or playing with play-dough while Wesley naps, I think it helps Talmage feel validated and loved so he doesn't get jealous. We still have plenty of stressful moments, but the good days outnumber the bad, thankfully. I am so anxious to see the relationship between these two develop as they grow. I hope Talmage can always reply "Wesley" when I ask who his best friend is!
Posted by Kaitlyn at 11:51 AM