As most of you know, we are expecting another baby boy in October! I am due October 12, which is incidentally the day after Talmage's birthday. That puts me at about 22 weeks along right now. Things are going well! My doctor routinely does pretty regular ultrasounds, so I thought I would post some pictures. Watching the rapid growth is absolutely fascinating to me.
Here is the baby at 6 weeks along. See the dashed line between the two plus marks? That is measuring the length of the baby. The other speck there is the beginning of the yolk sac. 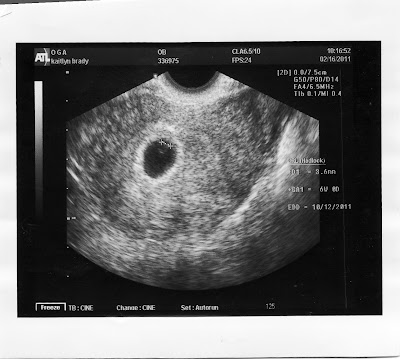 Here is another picture, this time without the dashed line. It's really just a smudge on the screen, but the doctor could already see a heartbeat! Incredible. 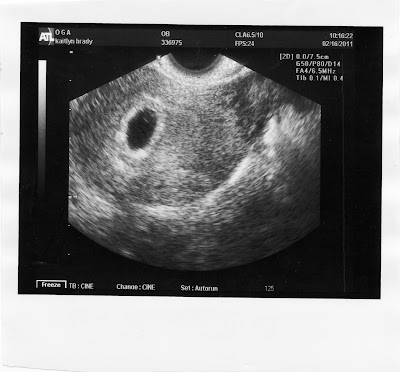 These images are from just 3 weeks later, when I was about 9 weeks pregnant. Here we have a little peanut! The head is tilted slightly downward on the left, and you can see the little arm buds coming out of the sides of the body. 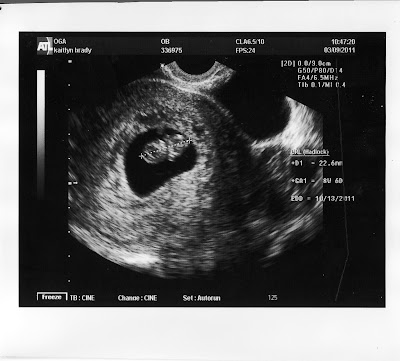 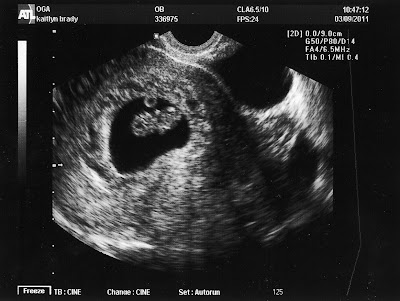 This is the change that really gets me. Just 4 weeks later, at 13 weeks along, we have a full-blown baby with fingers and toes and everything! 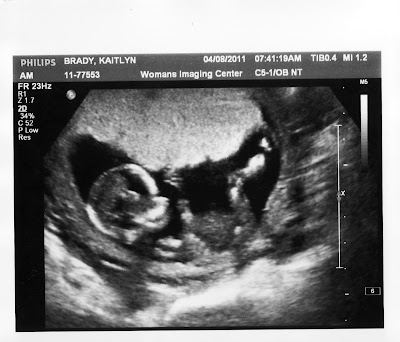 Then came the day of the big ultrasound, which just happened to fall on Sam's birthday! What a great birthday present! Along with finding out that we're getting another little boy (Wahoo!!!) we got to see a bunch more images of the baby. In fact, they took over 80 pictures! It was such a relief to discover that the baby is growing well and developing normally--especially in light of the mess with the tonsillitis/peritonsillar abscess I had when I was about 5 weeks along. Of course, that was the time the baby was the most vulnerable, so having a fever and taking medications really concerned me. It is such a comfort to see that everything appears to be normal. Now the ENT just has to check on me periodically throughout the pregnancy until he can remove my tonsils after the baby is born. Here is the front view of the face. 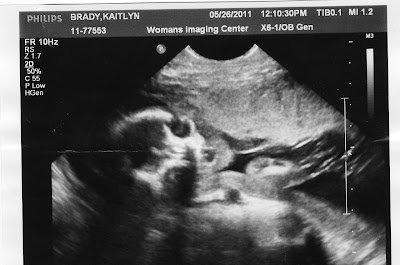 And here is the hand--see the fingers on the left side of the screen? He was pointing! 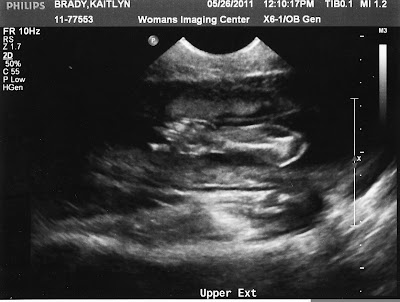 And here is his leg. Take a look at the size of that foot!!! When Talmage was born, there was meconium in the amniotic fluid, so they had to take him right away and check him out. While I was waiting for them to bring him to me, the nurse came and told me, "He has really long feet" (See them here). When they stamped his footprints on the certificate, there wasn't enough room and the prints overlapped the writing on the top and bottom! It looks like we're getting another bigfoot. :) His foot is longer than his shin! See how his toes totally curl around? I love this image of his leg all curled up against his belly. 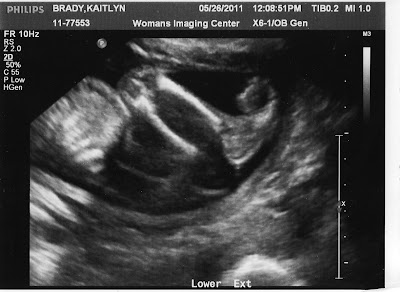 The bottom view of his super long foot 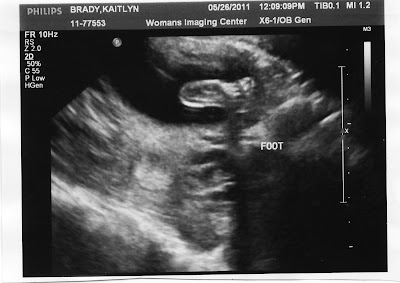 He was all nestled up in the corner, so there was too much tissue around him to get really great 3D shots, but here are 2 they gave us. Talmage loves this one. He sees it and starts exclaiming, "Baby! Baby!" I didn't think he could really make it out, but then yesterday he said, "Nose!" When I asked him where the nose was, he pointed right at it. And this morning he came into the bathroom where I was getting ready holding this picture and saying, "Baby! Baby!" When I came out all the other ultrasound pictures were scattered on the floor. I guess he can see the baby face in there! 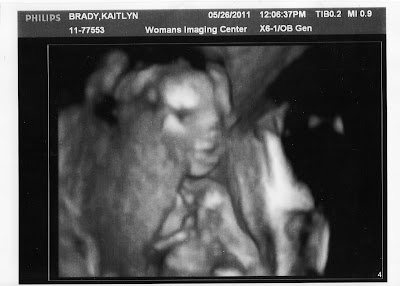 This one is hard to see, but it's a profile shot. If you look toward the right hand side of the shot, you can see the little inset for eyes, the nose, and the mouth. The back of the head is on the left side. Think of his head being open and seeing a view into his brain in the middle of the screen and you'll probably be able to make it out. And his little fist is curled up and resting on his forehead! I guess he was stressed? Or maybe just thinking hard. 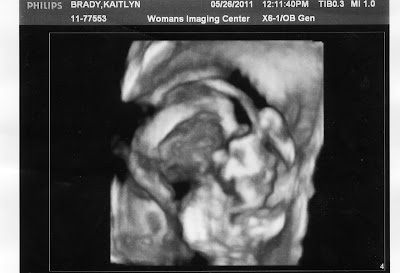 Anyway, we're thrilled about this new addition that will be coming to our family! With Talmage I measured about 6 days behind at my 20 week ultrasound, and he was 4 days late. This baby is measuring just about right on, so we'll see--maybe we'll have a double birthday!
If you want to compare with Talmage's ultrasound pictures, you can see his here. I think they look pretty similar, although it's hard to tell with ultrasounds!
Posted by Kaitlyn at 8:16 PM