Bugs...The Story of my Life

Many of you know about the cockroach issues that led us to our new house. (By the way, the problems escalated GREATLY after that post...) Anyway, we have been loving our new house. And the roach problem is essentially gone, thankfully. We were terrified we would bring it with us! We had to search everything thoroughly, wash every dish, and throw a lot of stuff away when we moved. So things have been great. However, we have had a few bug troubles that I thought deserved to be shared.
First, we wanted to get our new house sprayed before we moved in so that any roaches that tagged along would die upon arrival. Thankfully, an exterminator lives in our ward, and he kindly came and sprayed a few days before we moved in. Because our house is brand new--we are the first ones to live in it--there were a lot of bugs from digging up the lot. Additionally, it sat empty for a few months before we moved in, so the bugs went crazy. "You have a LOT of fire ants," he informed me. "And a LOT of spiders, and a LOT of wasps." Thrilling, right?
So he went through the empty house, spraying as he went, and checking out the bugs he found (thankfully there weren't many inside). The biggest horror came when he found a brown recluse spider in the garage. I worriedly asked him if those could kill Talmage, and he said he wouldn't say they couldn't, but they would probably just make him really sick.
But he pulled out his power sprayer, sprayed the garage with bug spray, and told me to call him if things got bad. I was very relieved that although we have a few spiders every now and again in the corners, the ants and the wasps in our backyard have really decreased.
So on to story number two. Our washer, which was purchased off of Craigslist and conveniently broke after a few loads of laundry, came from a house kind of in the country. There were these strange little red spider-type bugs all over the place, but they only had six legs. They seemed harmless, seeing as how there were two children running around barefoot and there were literally thousands of these bugs all around. We brought the washer to the new house, put it in the garage until we moved in about a week later, hauled it upstairs, hooked it up and...then a bunch of these little red spider bugs ran out all over the washer! I would do a load, kill all of the bugs that came out, and then repeat the process. Very strange.
We also got our refrigerator off of Craigslist. I love Craigslist so much, but buying big things off of it is always a bit risky. So our fridge had a horrible smell in it when we bought it, but I figured I could just bleach it and everything would be ok. It also appeared that a loaf of multi-grain bread had exploded in it! There were crumbs everywhere! Well, as I began cleaning, I discovered that these "crumbs" were actually some sort of...weevil? I'm not really sure. But they were shoved into every nook and cranny of the fridge. I spent about 10 hours cleaning it! It involved disassembling the ice maker, removing all the shelves and individual components of the fridge, and using a lot of bleach and hot water. Here are some pictures of the bugs...anyone know what they are? They really don't look like weevils up close. At least not the kinds I saw online! 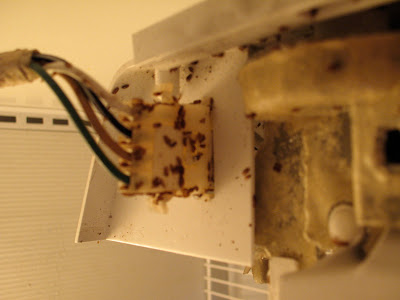 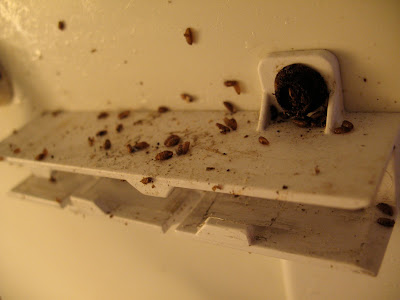 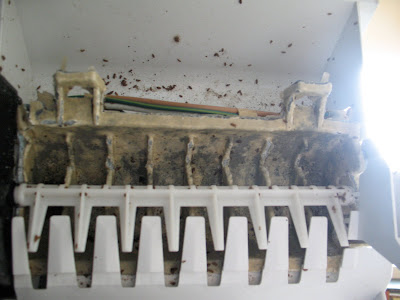 One night we were in our room and I spotted movement on the ceiling. I looked up and started screaming, "Tree roach! Tree roach! Tree roach!" One of the BIG roaches had crawled out of the attic, somehow squeezed out of the door, and was sitting up there. Sam expertly smashed it with a shoe, and we haven't seen one since.
We are certainly having a great time living here in Houston, but goodness, these bugs take some getting used to! :)
Posted by Kaitlyn at 7:55 AM