I Wish It Were An April Fool's Day Joke...

Sam had a doctor's appointment on April Fool's Day. He had a strange lump on his foot that he wanted to get looked at. Well, the doctor told him that it was a cyst that needed to be surgically removed! He said he didn't think it was cancerous, but they needed to do a biopsy that would give them the information they needed in order to know for sure.
After Sam went to the doctor, he was told that he would need to have surgery the very next day! It was nearing the end of the semester, so it was very hard for both of us to be able to spend the entire day in the hospital. We didn't really see another option, though, so we made the appointment.
That night, the car key got locked inside the car, and since we had recently purchased the car, we didn't have another copy of the key yet. Sam called a locksmith's office, and he was told that someone would be there shortly. Sam asked how much it would cost and was informed that prices started around $30. Well, over an hour later, the locksmith came. After fiddling with the lock with his tool for about 5 minutes, he gave Sam the invoice, which was for $150!!! We were very shocked about that, but the locksmith said that prices were always about $150, so the information given was incorrect.
So between the two incidents, it turned out to be a very expensive April Fool's Day! We were hoping that our bank account would be spared because of our insurance, but unfortunately the surgery was still around $1,000. Thankfully the cyst was not cancerous, though! I managed to get a few pictures of Sam at the hospital, but they are pretty low quality because I took them with the laptop since the camera was at home.
I held up the computer and told Sam I was going to take a picture. He was still pretty loopy from being knocked out, and he muttered, "Just as long as you're not going to make fun of me on our blog with them!" I told him that was precisely what I planned on doing. :) 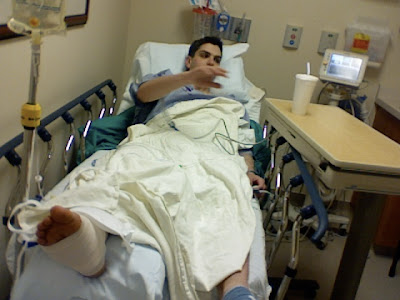 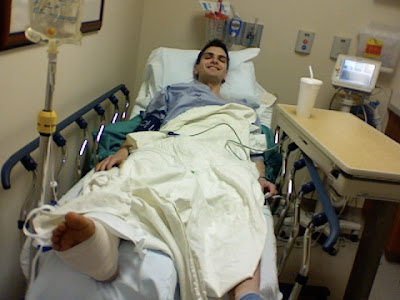 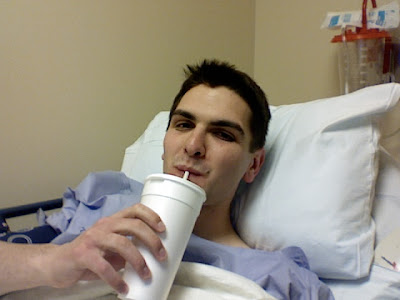 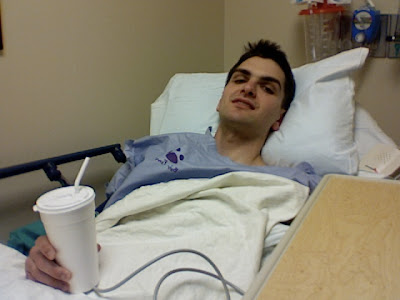 It was quite the adventure! We left the hospital and drove straight to BYU Campus, where Sam insisted he had to take the Biology GRE! I told him there was no way he could, but he insisted upon it, even as he was waking up from the anesthesia. He told me he could name all the amino acids and started listing them off before he got silly again and started making up a crazy amino acid named after me. It's amazing what medicine will do to you.
Another funny thing that happened was that the nurse told me that she was going to wheel him out into the hall from the recovery room, so she said, "Do you want to go out with me?" She said Sam just stared at her like she was insane. I'm glad to know my husband is loyal, even when mostly unconscious!
All is well now, Sam was only on crutches for a few days, and he is now healthy and somehow managed to score well on the Biology GRE despite his state of being!
Posted by Kaitlyn at 3:07 PM